On the afternoon of June 1, as President Donald Trump raged about the Black Lives Matter protests outside his gates, reporters noticed a familiar figure in Lafayette Park across from the White House. William Barr, Trump’s attorney general, was scoping out the scene with top military and law enforcement officers. It was an ominous sight, coming just hours after the president promised the nation’s governors that “we will activate Bill Barr and activate him strongly.”1

What happened next would transform the outcry and anger about racial injustice into a national uprising against Trump and his white nationalist agenda. Over the next few days, starting with Barr’s brazen order to clear the park, Washington experienced an unprecedented military operation and occupation. Nearly 8,000 troops from the Army’s National Guard and an astounding array of federal security forces and intelligence assets were assembled to confront the protesters.2

With US military leaders hesitant to use their troops against Americans, Barr has emerged as Trump’s wartime consigliere—an attorney generalissimo for the times. There are few people in Washington more suited for this task: Servility to presidential power, mixed with fealty to the institutions of government control, have long been hallmarks of Barr’s career.3

“You can rise fast when you’re willing to tell your boss whatever he wants to know,” says Michael German, a fellow at the Brennan Center for Justice who spent 16 years in the FBI before leaving in 2004. “Barr spent a lot of time working in these agencies, so his knowledge of how they operate is helpful to using them in an aggressive manner.”4

In fact, a deep look into Barr’s career exposes a deep commitment to what Dick Cheney called “the dark side”—the insidious world of covert operations, executive action, and mass surveillance. Moreover, his experiences in the national security state and the private telecommunications industry reveal a man who has operated at the pinnacle of America’s privatized intelligence system since the dawn of the digital age.5

As attorney general for President George H.W. Bush in 1992, Barr authorized one of the nation’s first domestic spying operations. The Department of Justice (DOJ) program, first disclosed by USA Today in 2015, was a giant database that “amassed logs of virtually all telephone calls from the USA to as many as 116 countries linked to drug trafficking.” The bulk collection system was operated secretly by the DOJ’s Drug Enforcement Agency (DEA) until it was suspended in 2013.6

The DEA program “ultimately became a model for the NSA’s phone records collection program,” which the agency used to collect the domestic calls and e-mails of millions of American citizens after 9/11, the American Civil Liberties Union (ACLU) wrote last year in a critical analysis of Barr’s career.7

Barr was part of the NSA spying program, too, not as a government official but as a top executive with Verizon, the company formed from a merger with NSA contractor GTE, where Barr worked for many years. Like Cheney, who was instrumental to the NSA’s secret operation, Barr seems to know every lever of power available to a president willing to use them. (The DOJ did not respond to questions about Barr’s career.)8

William Barr is one of four sons of Donald Barr, a former member of the Office of Strategic Services, the precursor to the Central Intelligence Agency. In 1968, he enrolled at Columbia University, where his father taught for many years. There, he had his first experience in confronting the American left when a group of radicals seized campus buildings to protest Columbia’s role in gentrifying black neighborhoods and the university’s close ties to the Institute for Defense Analysis.9

The Institute is a military think tank that, according to an insider’s account of the Columbia struggle, developed weapons for the counterinsurgency wars the United States was fighting in Vietnam and across the world. Barr hated the protests. In a recent profile, the historian Paul Cronin remembered Barr as part of a gang of upper-class thugs called the “Majority Coalition” that physically fought and threatened anti-war demonstrators.10

From Columbia, Barr went straight into the CIA, where he worked from 1973 to 1977 as an analyst and assistant legislative counsel. After a stint working on domestic policy for President Reagan, he joined the first Bush administration, where he rose from deputy AG to attorney general. He quickly became known as a determined advocate for the expansive use of presidential and military power. This was also his entrée into the early surveillance state, which began with the domestic spying program he ordered at the DEA.11

In 1993, Barr was hired as general counsel and executive vice president of GTE, the world’s third-largest telecommunications network. After GTE merged in 1999 with Bell Atlantic, it was renamed Verizon, and Barr stayed on as general counsel, where he remained until 2008. This period of his career—where he made the bulk of his $40 million fortune—is typically described as a shift toward antitrust and industry regulation issues.12 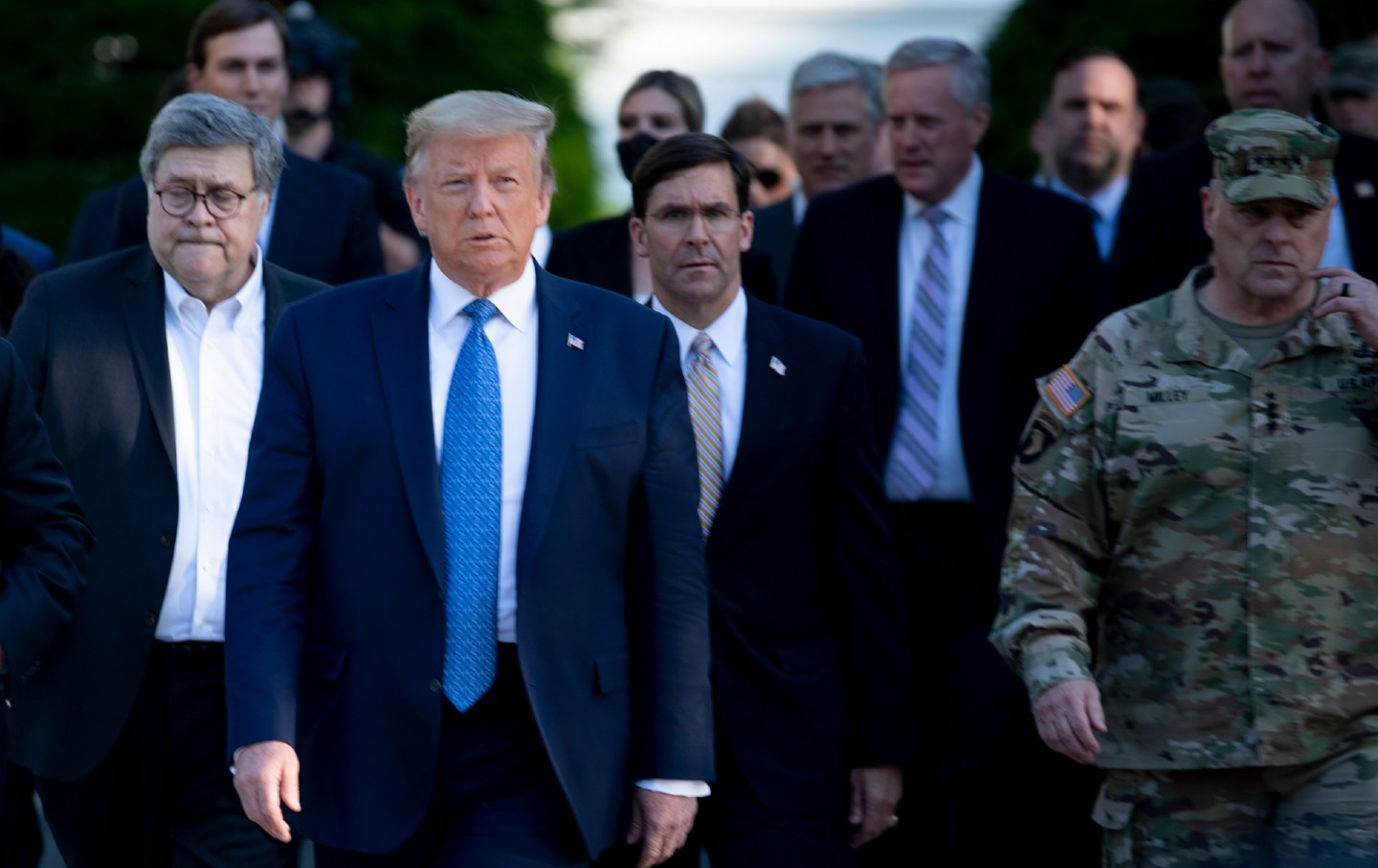 President Donald Trump walks with US Attorney General William Barr (L), US Secretary of Defense Mark T. Esper (C), Chairman of the Joint Chiefs of Staff Mark A. Milley (R), and others from the White House to visit St. John's Church on June 1, 2020, after the area was cleared of people protesting the murder of George Floyd. (Brendan Smialowski / AFP via Getty Images)

But that’s only part of the story. When Barr joined GTE, he also became counsel for GTE’s government services division. Created in 1984, it had become, through a series of acquisitions, one of the Pentagon’s largest contractors, providing secure communications systems to the Army, Navy, and Air Force as well as the NSA. Barr hinted at GTE’s classified work in 1996, when he testified before a hearing of a commission on “the roles and capabilities” of US intelligence after the Cold War.13

“There’s never been a greater need for a robust intelligence capability in this country than now,” he said. “I would include not only the function of collection of intelligence, but also my view that we need a very strong covert action capability.” It was an illuminating choice of words, because both “collection” and “covert” were key to one of the programs that Barr inherited when he took over in 1993.14

In the mid-1980s, GTE’s government unit was tapped by NSA’s Operations Directorate to develop a digital storage system for voice communications collected by NSA listening posts. At the time, of course, the NSA’s secret work and its system of global surveillance were little known to Americans.15

MINSTREL, its code name, “was the largest Automated Data Processing contract to date for NSA at that time,” says Tom Drake, the prominent whistle-blower, who worked on the project as a contractor and later exposed corruption at an NSA program run by military giant Science Applications International Corporation. (See “Obama’s Crackdown on Whistleblowers,” The Nation, March 2013.)16

Drake was hired by GTE in 1989 and soon discovered that MINSTREL’s costs were out of control. The award was for $144 million, “but with lots of cost overruns, NSA ended up spending closer to $250 million.”17

Much of that, he believed, was due to outright fraud. Moreover, the program didn’t work, forcing the NSA to keep extending the contract. When Drake asked a top GTE executive about its failure to deliver MINSTREL on time, he said he was told that “we’re under no obligation to show anything—all we need to show is best effort.”18

In 1991, disgusted at what he’d seen, Drake took his complaints to the Pentagon’s Office of Inspector General as well as GTE’s general counsel—Barr’s immediate predecessor. “That’s how I became a whistle-blower,” Drake told me. “This is where, to my horror, I really began to appreciate how run amuck the military-industrial complex had become.”19

MINSTREL, which was just one of the contracts GTE held with the NSA, was eventually canceled, partly because of Drake’s IG complaint. In 1996, Barr helped orchestrate the government unit’s merger with General Dynamics Information Technology (GDIT). Following its recent acquisition of CSRA Inc., GDIT is now one of the nation’s five largest intelligence contractors, with a strong presence at the NSA.20

After he moved from GTE to Verizon, Barr turned his knowledge of the mechanics of intelligence collection to domestic surveillance. In 2001, the phone giant was one of a handful of companies that participated in Stellar Wind, the massive warrantless-surveillance program launched by the George W. Bush administration.21

Some of Barr’s hard-line policies on dissent may have come into play in recent weeks. On May 31, he activated a network of 56 FBI Joint Terrorism Task Forces to confront what he called the “violent agenda” pursued by “anarchistic and far left extremists” using “Antifa-like” tactics. “Basically, this was Barr’s attempt to mollify Trump,” said German, the former FBI agent.23

Meanwhile, reports that surveillance drones and airplanes were observed over both Minneapolis and Washington have sparked concerns in Congress that federal agencies might be conducting illegal surveillance. In response, on June 11, a top Pentagon official informed the House that none of the collection agencies, including the NSA, had been asked by the White House “to undertake any unlawful or inappropriate intelligence activities.”24

With Barr in charge, there’s a good possibility that the DEA might be up to its old tricks again. On June 2, Buzzfeed News obtained a memorandum from the agency’s acting administrator, Timothy J. Shea, stating that the DEA had been granted “sweeping new authority to “conduct covert surveillance” of the protests. That prompted Representative Jerrold Nadler, the chairman of the House Judiciary Committee, to ask Barr to “immediately rescind” the authorities, which he called “unwarranted and antithetical” to civil rights.25

Meanwhile, the protests in Washington continue day after day, and the crossroads near the White House where Barr’s security forces attacked demonstrators and reporters has been named Black Lives Matter Place. Chances are good that the new title will last much longer than Barr’s ugly legacy of providing legal cover for Trump, arguably the most hated president in the city’s history.26