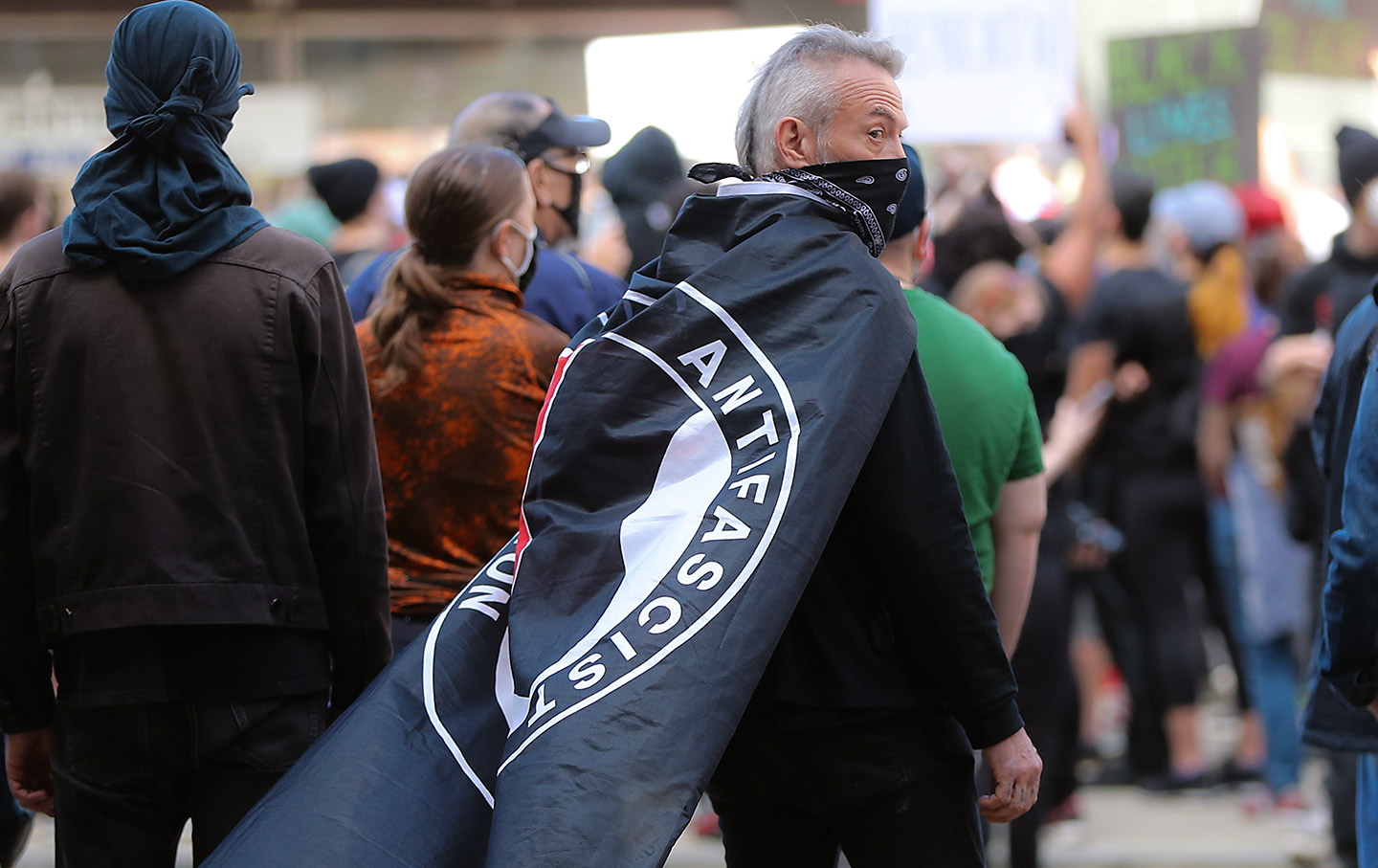 A protester with an antifa flag draped over his shoulders stands at a rally to demand justice for George Floyd and support of the Black Lives Matter movement in Boston on May 31. (Photo by Matthew J. Lee / The Boston Globe via Getty Images)

The FBI’s Washington Field Office “has no intelligence indicating Antifa involvement/presence” in the violence that occurred on May 31 during the D.C.-area protests over the murder of George Floyd, according to an internal FBI situation report obtained exclusively by The Nation. That same day, President Donald Trump announced on Twitter that he would designate “Antifa” a terrorist organization, even though the government has no existing authority to declare a domestic group a terrorist organization, and antifa is not an organized group. Following the president’s tweet, Attorney General William Barr said in a statement, “The violence instigated and carried out by Antifa and other similar groups in connection with the rioting is domestic terrorism and will be treated accordingly.” 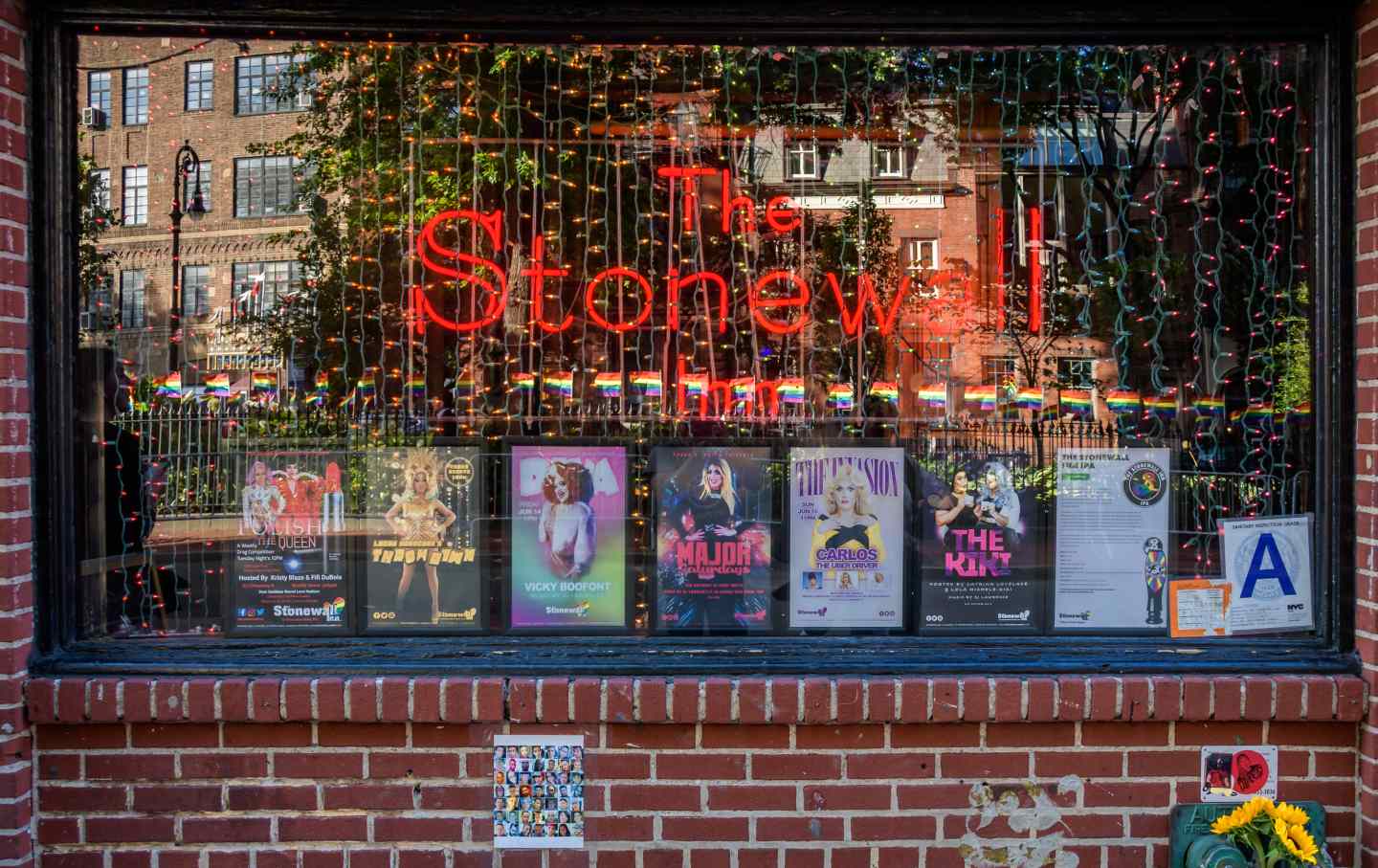 The FBI report, however, states that “based on CHS [Confidential Human Source] canvassing, open source/social media partner engagement, and liaison, FBI WFO has no intelligence indicating Antifa involvement/presence.” The statement followed a list of violent acts like throwing bricks at police and the discovery of a backpack containing explosive materials, which were flagged by the FBI under a “Key Updates” section of the report. The FBI has been issuing such reports daily since the weekend, according to a Bureau source, who added that none of these documents contained any evidence of antifa violence.

Antifa, short for “anti-fascist,” is a type of militant anti-racist, anti-nationalist organizing that does not rely on the justice system to confront the far right. Groups associated with antifa have destroyed property and committed violence in the past, but the fact that the FBI’s situation reports cannot find any evidence of such involvement now suggests that fears about such groups may be exaggerated.

The report did warn that individuals from a far-right social media group had “called for far-right provocateurs to attack federal agents, use automatic weapons against protesters.” (The Nation is withholding the name of the group in order to not disrupt any potential law enforcement investigations.)

Last year, FBI documents obtained by this reporter showed that the Bureau has listed “Racially Motivated Violent Extremists” among its top counterterrorism priorities. While those priorities did include white supremacist groups, they also included what the FBI called “Black Identity Extremists.” The documents reveal that the Bureau linked “retaliatory lethal violence against law enforcement” to the “shooting of Michael Brown in Ferguson, Missouri,” from which the Black Lives Matter movement originated.

The report, marked “For official use only” (FOUO), was provided to The Nation by an FBI official on condition of anonymity. The report is titled, “Civil Unrest in Washington AOR [Area of Responsibility] Following Death of George Floyd.” The report’s reference to “CHS” suggests that the Bureau possesses secret informants participating in the protests.

Asked about the report and why they’ve been unable to substantiate antifa involvement in the violence, the FBI’s Washington Field Office declined to comment.