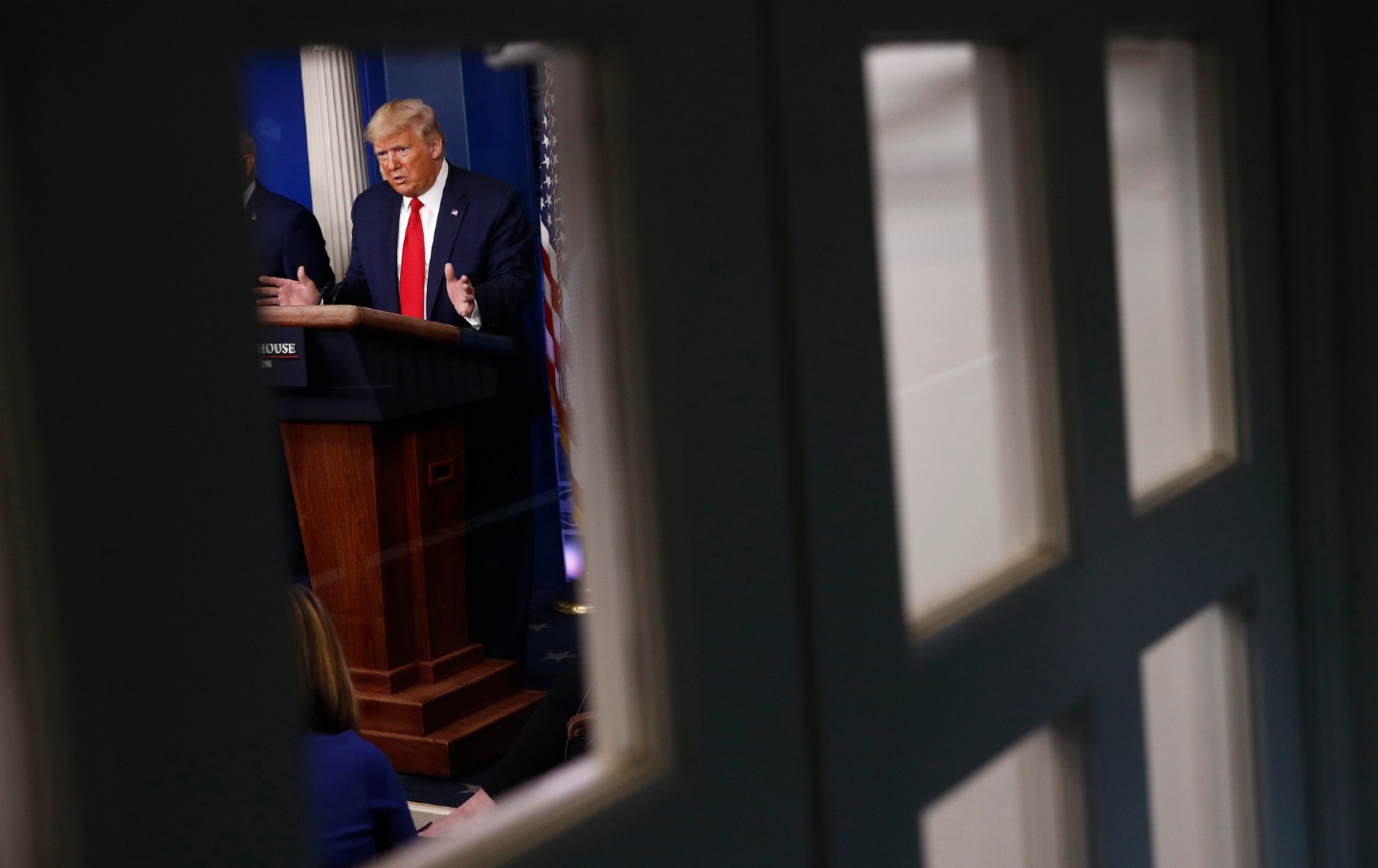 The Nation believes that helping readers stay informed about the impact of the coronavirus crisis is a form of public service. For that reason, this article, and all of our coronavirus coverage, is now free. Please subscribe to support our writers and staff, and stay healthy. (Patrick Semansky / AP Photo)

On Sunday night, 10 minutes before midnight eastern time, Donald Trump tweeted, “WE CANNOT LET THE CURE BE WORSE THAN THE PROBLEM ITSELF. AT THE END OF THE 15 DAY PERIOD, WE WILL MAKE A DECISION AS TO WHICH WAY WE WANT TO GO!” As so often, the exegetical mystery of Trump’s comments can be clarified by returning to the most important source of his worldview, Fox News. Earlier in the evening, Fox News Host Steve Hilton ranted against Trump’s medical adviser Dr. Anthony Fauci, who advocated draconian social distancing measures to slow the spread of the coronavirus until the medical system can be strengthened to deal with it.

Hilton argued that these measures would cause more damage than the coronavirus itself. “You know that famous phrase, ‘The cure is the worse than the disease’?” Hilton asked. “That is exactly the territory we are hurtling towards.”

The push for social distancing measures, including closing schools and restaurants, is relatively new. Closure of these institutions was only announced in New York on March 15. Yet there are signs that many on the political right—and even centrist business leaders—are already sick of the public health emergency. They want the economy to go back to normal and are promoting fringe ideas in an attempt to discredit mainstream epidemiologists.

It’s unclear whether Trump can actually roll back any of the existing quarantine measures, which are set by governors and mayors. But Trump can certainly affect the behavior of his supporters. If millions of Trump fans think that quarantines aren’t worth the aggravation, they are much more likely to violate them. That’s the most likely danger of Trump’s tweet and his potential shift in policy.

Fox News has already helped poison policy on the pandemic. The network was a major promoter of the idea that warnings about a pandemic were a “hoax” designed to derail Trump’s presidency. Trump initially went along with that until he was persuaded by a dissident in the Fox ranks, Tucker Carlson, to take the pandemic seriously.

But it’s clear that an influential faction at Fox still believes the coronavirus threat is oversold. On Friday, a bevy of Fox personalities, including Laura Ingraham and Brit Hume, were hawking on twitter a Medium post by Republican operative Aaron Ginn arguing that the government was over-reacting to the coronavirus. Ginn is not an epidemiologist, and his post was riddled with analytical errors. It was quickly taken down by Medium, but not before being seen by millions

On Thursday, The Wall Street Journal published an editorial arguing, “If this government-ordered shutdown continues for much more than another week or two, the human cost of job losses and bankruptcies will exceed what most Americans imagine. This won’t be popular to read in some quarters, but federal and state officials need to start adjusting their anti-virus strategy now to avoid an economic recession that will dwarf the harm from 2008-2009.”

In the United Kingdom, Boris Johnson’s government initially followed a hands-off strategy along this line, with the idea that it might be best to let the coronavirus spread quickly in order to minimize social disruption. This idea was abandoned once Johnson’s government came to realize the dangers of overwhelming the health care system.

It’s not just the far-right that is talking like this. Former Goldman Sachs CEO and Hillary Clinton supporter Lloyd Blankfein tweeted out on Sunday night, “Extreme measures to flatten the virus ‘curve’ is sensible—for a time—to stretch out the strain on health infrastructure. But crushing the economy, jobs and morale is also a health issue-and beyond. Within a very few weeks let those with a lower risk to the disease return to work.”

The problem with these arguments is twofold: They underestimate the dangers of scuttling social distancing programs too soon; they also disregard the tools needed to return to cushion the economic shock. As evident from the examples of both China and Italy, extreme measures are needed to slow the spread of the virus or it will overwhelm the health care system, leaving a potential death toll in the United States in excess of 10 million. If the virus is slowed down, there’s a real chance that the health care system can get the medical equipment (ICU beds and ventilators) needed to keep the death count to a minimum. Giving up on social distancing too early will doom countless Americans to a painful and unnecessary death.

The economic costs of the coronavirus are real, but they can be dealt with through robust intervention: a combination of universal basic income, mortgage, and rent forgiveness, bailouts for small business and a Keynesian booster shot at the end of the pandemic.

The problem is that the political right, along with centrists like Blankfein, don’t want such a heavy intervention in the economy. As a result, they indulge in a truly grotesque display of self-interested reasoning and argue that there can be a quick and easy end to quarantines, shutdowns, and social distancing campaigns.

There Is No Crisis of Laziness

What they are arguing for goes beyond Social Darwinism and is, in fact, a kind of cult capitalism. The existing system is viewed as so sacred that it is worth sacrificing innumerable human lives to keep it going. Even nonrevolutionary changes to the system are anathema.

Economics and medicine have always been intertwined, sometimes in strange ways. Under the surface of economic ideas, there are often metaphors taken from medicine and psychology: We talk about curing a depression, which can refer to both a person and an economy.

There flourished in Vienna from 1850 to 1870 a school of medicine some historians have dubbed therapeutic nihilism. This school held that most medical interventions did more damage than good and advocated that doctors simply oversee the natural process of recovery. There was some logic to this: It was the era of quack remedies.

Von Mises and Hayek were major opponents of John Maynard Keynes, who believed that economic depressions shouldn’t just be allowed to run their course but could be shortened by active government measures.

As in the great disputes between the Austrian school and the Keynesians, we now face a fundamental divide in both medicine and economics. Do we embrace therapeutic nihilism and just shrug our shoulders in the face of a pandemic, hoping that it will quickly extinguish itself? Or do we believe that human ingenuity and social cooperation can work together for solutions, ones that involve real sacrifices—but that can also help limit human misery?