With a mobilized progressive movement at his back, Joe Biden launched a clear break with the conservative consensus that has dominated our politics since Ronald Reagan. However, while this career centrist politician embraced what he called his “Roosevelt moment,” he enjoyed nothing like FDR’s majority in Congress or his connection with voters. The fate of Biden’s presidency will likely depend not just on whether he can produce—but on whether the progressive movement that helped bring him into office will be roused once more.

Despite a divided Senate and implacable Republican obstruction, the administration has passed two major investment bills. The American Rescue Plan, hailed by Bernie Sanders as the “single most significant piece of legislation for working-class people that has been passed since the 1960s,” put money in people’s pockets, helping to trigger record growth and job creation. The child tax credit would cut childhood poverty in half—if it were extended beyond the year for which it was authorized. The Bipartisan Infrastructure Law provides a long-overdue down payment on necessary investment in rebuilding America. The centerpiece of Biden’s agenda, his Build Back Better bill, was torpedoed by Joe Manchin, but its remnants may still provide the first major commitment to addressing the climate challenge.

Biden—who campaigned as a moderate and famously promised donors that “nothing fundamentally would change”—broke openly with the shibboleths of the conservative era. He championed public investment to meet the Covid threat and industrial policy to meet the challenge posed by climate change and by China. In the face of corrosive inequality, he called for expanding the social safety net and hiking taxes on corporations and the wealthy. He offered vocal support to unions and worker organizing. His appointments and executive orders signaled a revival of antitrust actions to take on corporate monopoly and corruption. His administration forged a global minimum tax on corporations and sustained Donald Trump’s trade tariffs, breaking with the free trade gospel of neoliberalism.

In foreign policy, Biden finally ended the forever war in Afghanistan. He rejoined the World Health Organization and the Paris Agreement on climate and extended the New START nuclear arms treaty with Russia. He named climate change as an existential threat and corruption as a threat to democracy.

The DCCC and the DSCC Are Not On Our Side

The War on Terror Is Still Alive and Well

Making Rahm Emanuel Ambassador to Japan Would Be a Sick Joke

Biden’s policy initiatives were popular but inadequate, a testament to the depth of the hole we are in. The “Biden boom”—5.5 percent growth, unemployment plummeting at a record pace, wages increasing, particularly at the bottom end—was marred by rising inflation, particularly in vital food and gas prices.

Ironically, his most costly failures came in the areas run by establishment officials—the supposed “adults in the room”—appointed in the wake of Trump’s clown show. He pledged that “science” would govern Covid policy, but the scientists at the CDC and the FDA were far too timid and politically inept, exemplified by the year-long delay before dispensing free N95 masks and home tests. The foreign policy “Blob” advisers were blindsided when the sudden collapse of the Afghan government proved how little we knew about that country after two decades.

Biden’s unexpectedly bold agenda ran headlong into the limits of his political majority. Republicans, literally bereft of a positive agenda other than obeisance to Trump, lined up in rancorous opposition. Despite the most unified Democratic Party in memory, the 50-50 split in the Senate and the three-vote margin in the House handed immense power to Senators Joe Manchin and Kyrsten Sinema and to the Big Pharma Democrats in the House. The sordid spectacle of endless Democratic negotiations with their holdouts was political poison, distracting from Republican obstruction and making the president look weak.

But Biden didn’t help. This lifelong transactional politician’s inability to reach—or force—a deal with Manchin was inexplicable, and he was also far too cautious in exercising his executive authority: The Department of Education, for example, is still studying whether to fulfill his promise to forgive $10,000 in student loan debt. Worse, he flunked the primary task of a transformational president: to establish a direct connection with the American people. While benefiting from the contrast with Trump’s chaos, Biden failed to communicate clearly and repeatedly about the challenges we face, name the ideas and interests to blame, or boldly lay out what can be done. Those failures, compounded by a gotcha mainstream media, magnified every setback. 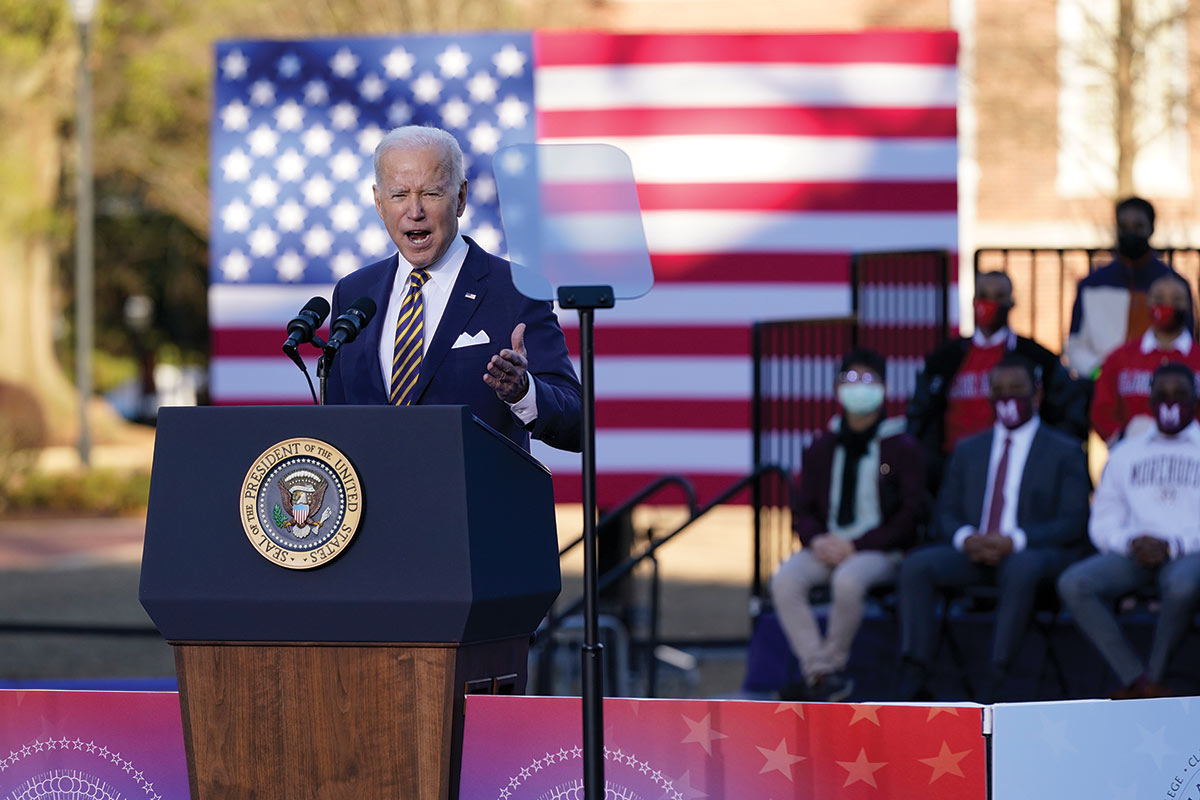 Biden Asks the Best Question: “What Are Republicans For?”

Biden added climate change and fighting corruption to his foreign policy agenda, but great-power tensions with China and Russia took precedence. Our bloated military budget—greater than at the height of the Cold War—passed with bipartisan support. America’s empire of bases remains intact—augmented by the buildup in the South China Sea.

What of the movements that propelled Democrats to take the House, the Senate, and the presidency? The young see little progress on climate or on college affordability. Women see the right to abortion in peril. Progress on prison and police reform has been minimal, while immigration and labor law reform were taken off the table by the Senate parliamentarian, a congressional bureaucrat. Meanwhile, Big Pharma, Big Oil, Wall Street, and the military-industrial complex continue to make out like bandits.

The contrast with Trump is stark. Despite its chaos, incompetence, and corruption, the Trump administration was dedicated to delivering for its base: packing the Supreme Court for evangelicals, passing tax cuts for corporations and the country club set, paying off entrenched interests from the military to Big Ag, and more. After Trump’s defeat, his Big Lie fueled and focused his movement’s anger. At the national level, craven Republican officials blocked voting reform, while state officials scrambled to rig the rules through partisan gerrymandering, voter suppression, and empowering state legislatures to overturn election results.

The Biden administration heads into its second year with the president’s approval rating plummeting toward Trump levels. The GOP’s base is aroused, while the Big Lie has alienated few traditional Republicans. In contrast, progressive movements are demoralized. Inflation saps the joy of the recovery. The chances of holding the House and Senate seem dim. If Republicans win either, progress will depend solely on what Biden is prepared to do with his executive authority.

Still, a failed presidency is not inevitable. Forcing votes on each popular element of the Build Back Better package—particularly the child tax credit, prescription drug reform, and paid family leave—would expose who stands in the way. The active use of executive authority could demonstrate what side Biden is on—from forgiving student loan debt to protecting workers on the job. Aggressive antitrust action could help deter price gouging, and if Covid and inflation subside, Biden may get credit for the strong recovery.

Historically, transformational presidencies are driven by movements on the ground: the abolitionists for Lincoln, the labor movement for FDR, civil rights for Johnson. Movements broadcast the need for change, popularize the agenda, mobilize voters. The fate of the emerging progressive majority and reform project will depend significantly on how progressive movements—from climate activists to Black Lives Matter—respond to the right-wing threat and the frustrating obstruction by all Republicans and two corrupted Democrats in the Senate. In the end, Joe Manchin had one thing right: The only way to drive the reform agenda is to elect more progressives—and to take out those legislators standing in the way. The energy for that won’t come from a corrupted and cosseted Democratic establishment—or from the White House. It will only come from the ground up.