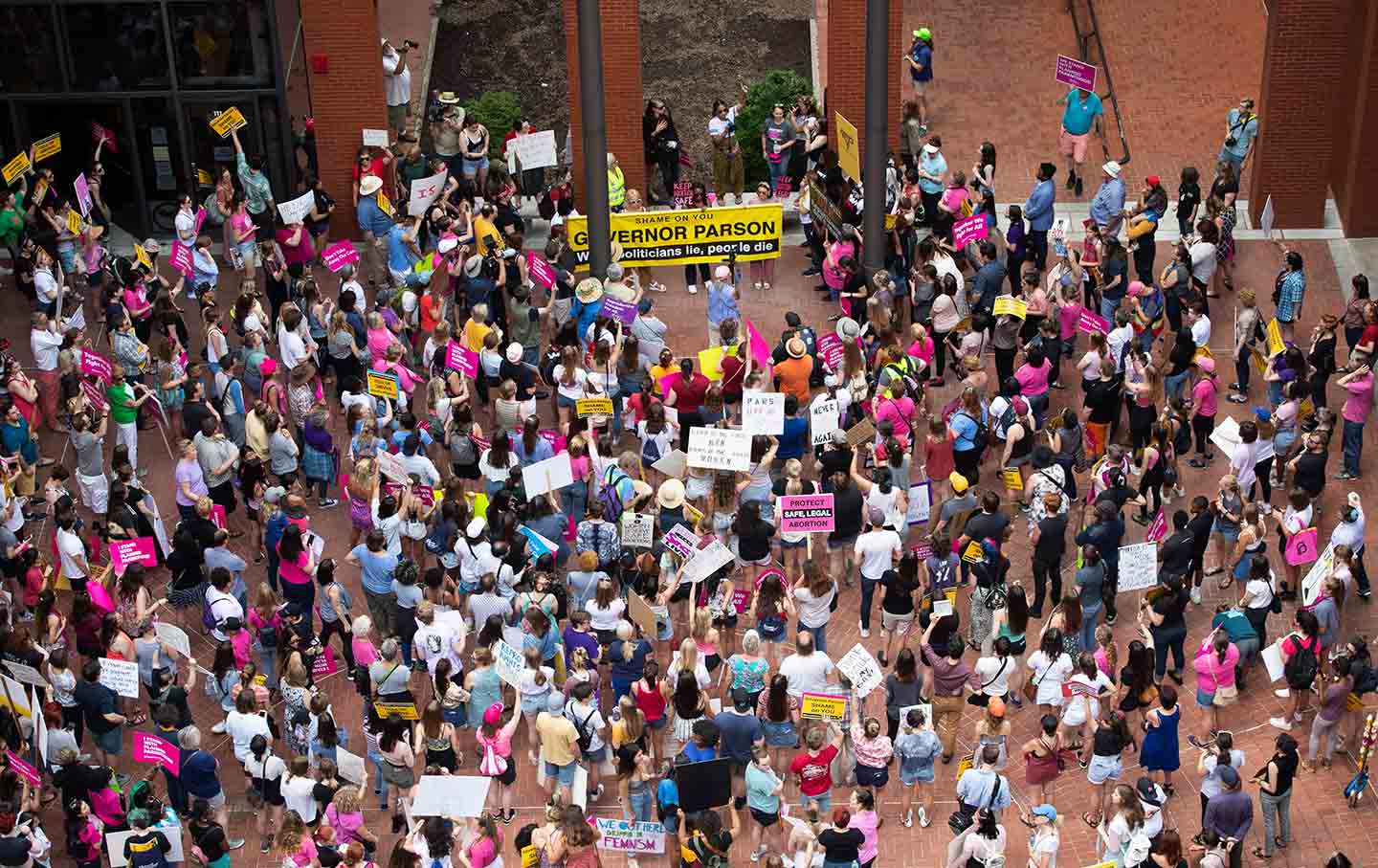 Thousands of supporters of abortion access rallied outside the offices of Missouri Governor Michael Parson in St. Louis, May 30, 2019. (Saul Loeb / AFP via Getty)

Since Roe v. Wade legalized abortion nationwide 47 years ago today, anti-choice lawmakers have passed more than 1,200 legal restrictions on abortion at the state level, each more manipulative and deceptive than the last. Anti-abortion extremists have been hailed as master strategists for their focus on seating anti-abortion ideologues in state legislatures across the country. From 2010 to 2017, Republican control of state legislatures grew from 14 states to 32; during those years alone, anti-choice lawmakers passed more than 400 restrictions on abortion. Anti-abortion hysteria reached a fever pitch in 2019, as states across the South and Midwest passed abortion bans, including six-week bans in Georgia and Ohio and a total ban on abortion in Alabama and the far right—from Donald Trump down to state legislators—adopted a strategy of lies to buoy their extreme agenda.

But Republicans are learning that this extremism has costs. Voters’ fury over Donald Trump’s agenda, which included rollbacks on abortion rights, combined with an influx of women and people of color running for office, led to Democratic wins in the midterm election. Democrats flipped seven governorships, six state legislative chambers, and more than 300 state House and Senate seats in 2018. Newly elected officeholders are moving swiftly to leverage their newfound power with an energized electorate at their side. And it’s becoming clear that many newly elected officials see protecting and expanding abortion rights as central to their mandate.

We know this because in 2019, more states passed proactive protections for abortion rights and expanded access than in any previous year. Ever. Illinois, New York, Rhode Island, and Vermont all enacted laws that codify a fundamental right to make reproductive decisions, including abortion. Maine guaranteed both private and public insurance coverage for abortion, and Nevada repealed its pre-Roe abortion ban that made it a crime to provide an abortion or for a woman to self-manage her own. In the 2018 elections, voters in four of these states had elected pro-choice governing trifectas.

New York was one of them. For 10 years, my organization, the National Institute for Reproductive Health (NIRH), had been sounding the alarm that we needed to update New York’s dangerously outdated abortion law, which regulated abortion as a crime and did not allow access throughout the course of a pregnancy if a woman’s health is in danger. New York’s law failed to reflect the core protections of Roe. But the bill to reform New York’s abortion law, the Reproductive Health Act, was long blocked by an anti-abortion state Senate and ignored by a voting public that was lulled by the security that Roe supposedly gave to their rights. Then, in 2018, a new dynamic emerged. A newly invigorated electorate voted in candidates who ran as change makers and wanted to address the attacks on abortion coming from the White House and too many statehouses. In November 2018, New York voters turned the state Senate pro-choice. As one of the new Senate majority’s first orders of business, it passed the Reproductive Health Act. On January 22, 2019, I was in the State Capitol in Albany as the Reproductive Health Act, a decade in the making, passed through the Assembly and Senate and was signed by Governor Andrew Cuomo—all in a matter of 8 hours.

Virginia was already on the path to electing a pro-choice majority in 2019 when state Republicans pounced on Delegate Kathy Tran’s testimony about a proactive abortion bill. They mounted a misinformation campaign about later abortion that targeted Tran and consumed the media narrative. Republican tactics carried the whiff of the last gasps of a dying mindset. Conservatives in Virginia thought they’d found a surefire way to tank a Democratic takeover of the Virginia General Assembly. In previous years, it may have worked. But even Donald Trump using his bully pulpit to repeatedly spew inflammatory and outlandish lies about abortion couldn’t throw off course candidates who supported abortion access.

The New Politics of Abortion

In 2019, the Virginia Democrats ran candidates in 92 of the 100 districts. As Joan Walsh reported for The Nation’s special issue on the new politics of abortion, these candidates were more diverse, skewed younger, and were not afraid to tackle abortion access head-on. NIRH Action Fund and NARAL Pro-Choice Virginia worked with pro-choice candidates and elected officials on how to define and defend their position on abortion rights and access, training every candidate who flipped a seat in the General Assembly. When the attacks on later abortion intensified, candidates did not shrink from the subject, but confronted the lies. “Despite all the unfounded attacks on abortion, we saw candidates sharing with voters why protecting abortion access was personal for them,” says NARAL Pro-Choice Virginia Executive Director Tarina Keene. “That was unprecedented.” Running in a swing district, candidate Dan Helmer and his wife released a video describing their support for abortion access—and unseated Republican Tim Hugo. He wasn’t the only one. On November 8, these candidates won across Virginia, neutralizing the most potent attacks that anti-abortion extremists could mount and ushering in another pro-choice governing trifecta. Now, as the 2020 legislative session opens, Virginia legislators are gearing up to repeal abortion restrictions in the state. As Progress Virginia Executive Director Anna Scholl explained, “Expanding access to abortion is not just a winning campaign issue, but a promise that was made to voters.”

What we are learning—led by activists and advocates who are fighting the attacks on the front lines—is that we are more effective when we publicly proclaim our support for abortion access for all and stand strong to defend that position when the ugly and deceitful attacks come. Hiding or apologizing for our support for abortion access will not prevent the attacks, and only contributes to abortion stigma. In the 1990s, many Democrats hedged their support for abortion rights by adopting Bill Clinton’s formulation that abortion should be “safe, legal, and rare.” In those years, Pennsylvania, with the White House, mounted a direct challenge to Roe that went to the Supreme Court and the federal government enacted the first-ever federal abortion ban. The years 1990 to 1999 also represent the greatest number of murders and attempted murders of abortion providers and clinic staff by anti-abortion zealots on record. History suggests that silence and shame do not mitigate political attacks on abortion or prevent violence against those on the front lines.

Progressive legislators and the voting public are recognizing that anti-choice forces will stop at nothing to undermine, and someday overturn, Roe, and are shoring up state protections accordingly. But there’s also a deeper change afoot. Victories like the ones we saw last year are not possible without strong voter support and the infrastructure to create the conditions for success. In 2019, 29 states and Washington, DC, introduced 143 bills to improve abortion access, up from just 12 bills in nine states in 2014. States have expanded insurance coverage for abortion and presidential candidates are calling for the repeal of the Hyde Amendment, thanks to the sea change in support for Medicaid funding for abortion brought about by the All* Above All campaign.

On the 47th anniversary of Roe, its fate is unclear, as the current Supreme Court gets its first crack at rolling back rights in June Medical v. Gee. But states will continue to move forward. Connecticut, Illinois, Massachusetts, New Jersey, and Virginia already have pro-active legislation on abortion access on the docket this year. In 2020, we have the opportunity—in state legislatures, in the voting booth, and in the streets—to show that the victories we secured in 2019 were just the beginning.