Florida Representative Anna Eskamani (with bullhorn) at an Orlando protest against abortion bans in May 2019. (Emily Wray)

I was sitting in the back of a cab in Washington, DC, when the driver asked me about my day job.

It was 2015, and a question as simple as “What do you do?” can hold a lot of weight when you work at Planned Parenthood, the nation’s leading provider of reproductive health, education, and advocacy.

I sat there for a few seconds debating if I should tell him, or if I should avoid the debate that could result from my response. I smiled gently, looked towards the rear-view mirror and said, “I work at Planned Parenthood. Have you heard about us before?”

The courage to talk about abortion even when it’s not personally or politically convenient is critical to the future of reproductive freedom in our country. It’s how we will break the stigma that surrounds abortion, empower more people to share their personal stories, and hold politicians accountable for restricting our bodily autonomy.

I come from humble beginnings. I was born and raised in Orlando, Florida, as the daughter of working-class immigrants from Iran. My family did not have much money, and I remember when I was very young my Mom talking about her personal decision to end a pregnancy. She wished to have a fourth child, but we just couldn’t afford it.

Her choice to have an abortion was grounded in motherhood, and she is not alone. In fact, of those who received an abortion in 2014, 59 percent had had “at least one birth,” according to the Guttmacher Institute.

My mom passed away from cancer when I was 13 years old. She left a gaping hole in my heart, and without her, I didn’t have anyone to talk about sexual health, let alone dating or pregnancy. My Florida public high school provided abstinence-only education, so I soon found myself at a Planned Parenthood health center looking for answers. I left that medical appointment feeling empowered, and with a method of contraception that was right for me. I began volunteering at Planned Parenthood and would join as staff in 2012.

My work at Planned Parenthood in Florida gave me an in-depth perspective of the deep disconnect between politicians and the people they are elected to serve. No matter how many facts we stressed, stories we shared, or patients who testified, we would still lose every abortion fight in the legislature. It became clear to me that nothing would change in Florida unless we elected more women to office, and it was Trump’s victory in 2016 that motivated me to run for office for the first time in 2018.

But it’s not just about what the polling says—I wanted to be authentic to our constituents, brave for our Planned Parenthood patients, and unapologetic in the abortion access fight. I did not want to win an election if I could not be myself, and supporting reproductive freedom is foundational to who I am as a person and as a Democrat.

Our abortion “out loud” approach took shape in all elements of our campaign. We illustrated my work at Planned Parenthood on our leaflets, on our website, in our television ads, and through digital platforms. We had courageous conversations about abortion at the doors of many of the voters in our district. Some constituents told me that they did not support abortion access but respected personal medical decisions. Others shared their own story of their abortion. Some voters explicitly stated that abortion access was one of the most important issues to them, while one yelled at me across her yard because she opposed abortion.

These conversations were not easy, but they were transformational to our election—and we not only won our race; we flipped a swing seat by nearly 15 points. 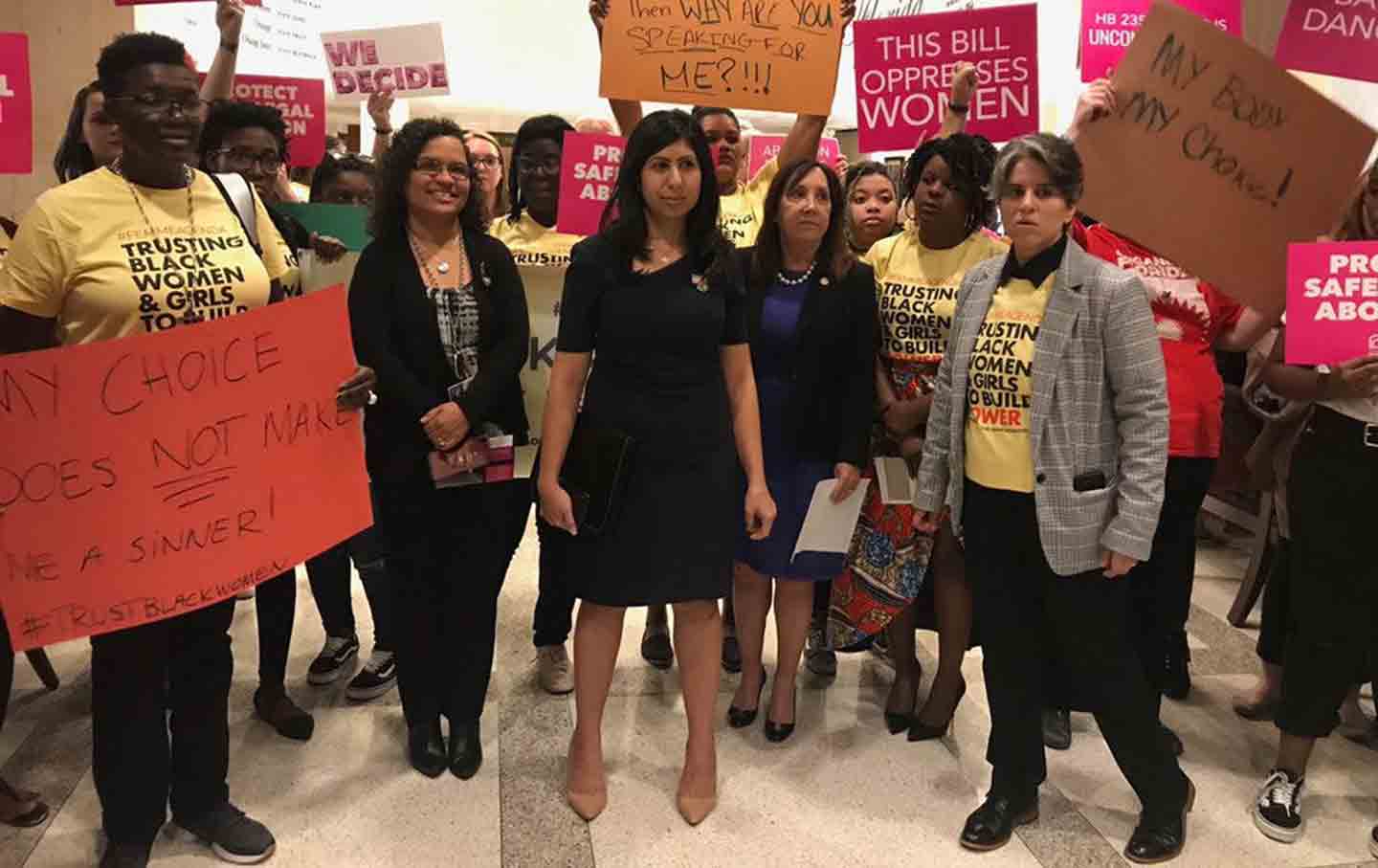 Representative Anna Eskamani at a silent demonstration organized in front of an anti-abortion press conference at the Florida legislature.

Now, as a state lawmaker, I have the unique opportunity—and responsibility—of inspiring my colleagues to show up for abortion issues in a meaningful way. This means calling out language that is stigmatizing, like the argument that abortion should be “safe, legal, and rare,” and instead focusing the dialogue on the values that define us as Americans, including the notions of freedom, rights, justice, and dignity. We’ve hosted trainings with our legislative colleagues focused on abortion access, supported Republicans who vote against their caucus on this issue, hosted rallies, and sponsored pro-active bills that restore abortion access versus roll them back.

What Does Reproductive Justice Activism Look Like As Clinics Close?

How Abortion Funds Showed America That ‘Roe’ Is Not Enough

This session we’ve filed HB6047, legislation that would repeal Florida’s latest politically motivated abortion restrictions. The bill won’t move in the Florida House, but the intent alone sends a clear message to all Floridians that we won’t back down.

There are a few elements to keep in mind when advocating for abortion access. First is to remember that abortion restrictions don’t just impact women. They impact anyone who can become pregnant, which means we must create space for trans men and others to be a part of the conversation. Using only gendered language excludes and dismisses these important communities. It is also important that we focus the debate on people who are directly impacted and recognize the history of reproductive justice as it ties to reproductive health and rights. Encourage those who have had an abortion to lead the debate and show up for them in a meaningful way. I must also stress the necessity of responding to misinformation and providing a proactive approach to protecting abortion access. Call out lies and support proactive bills—the best defense is always a strong offense.

Our efforts to fight for “abortion out loud” in Florida are working. More lawmakers than ever before are speaking out on abortion access and championing the issue in personal ways, taking the conversations from our State Capitol back to their home districts. The fight in Florida is just beginning too; this session we are facing yet again another attempt to ban abortion, with five bills already filed and two moving through the process.

We’ll be there to fight back every step of the way, because reproductive health is a fundamental right, and when someone decides to have an abortion, it should be safe, affordable, and free from punishment or judgment. Indeed, we are not truly free if we can’t make our own decisions about our bodies, our lives, and our futures. That’s why I am proud to be a passionate advocate for abortion access.

I hope that our courage in a state like Florida encourages fellow elected officials, candidates, and everyday advocates to be just as bold and unapologetic on abortion access, too.