A demonstrator carries a globe with a model of the Paris Eiffel Tower, with reference to the 2015 Paris Agreement to limit global warming preferably to 1.5 degrees Celsius, during a demonstration called by Fridays for Future, Greenpeace, KoalaKollektiv and others to protest against bank investments in fossil fuels, on August 13, 2021 in Frankfurt am Main, western Germany. (Armando Babani / AFP via Getty Images)

This story originally appeared in Scientific American and is part of Covering Climate Now, a global journalism collaboration strengthening coverage of the climate story.

On October 31, world leaders will descend on Glasgow, Scotland, for the United Nations Climate Change Conference, or COP26, in a last-ditch effort to defuse the climate emergency by limiting global warming to less than 1.5 degrees Celsius. Reaching that level would still bring violent storms, deep flooding, gripping droughts, and problematic sea-level rise, but it would avert even more severe consequences. Global temperature has risen by nearly 1.1 degree C since the Industrial Revolution.

A clear understanding of how emissions affect temperature shows that there is still time to reach the political agreements, economic transformations, and public buy-in needed to sharply cut emissions, limit temperature rise, and limit destruction. Nations can duck the 1.5 degree ceiling if they make deep cuts now. As of July 30, commitments to reduce emissions by the 191 nations that signed the 2015 Paris Climate Accord would permit 2.7 degrees of warming by 2100, according to a report issued in September by the secretariat of the UN Framework Convention on Climate Change, the group that coordinates ongoing pledges to the Paris Accord. The charge for the COP26 meeting is to eliminate the gap. Here’s what needs to happen.

The first step is to get rid of an old idea that the public, the media and policymakers are not clear on—the notion that even if humans stopped emitting carbon dioxide overnight, inertia in the climate system would continue to raise temperature for many years. Because CO2 can persist in the atmosphere for a century or more, the argument goes, even if the concentration stopped rising, temperature would keep going up because the heat-trapping mechanism is already in place. In other words, some level of future warming is “baked into” the system, so it’s too late to avoid the 1.5 degree threshold.

But scientists discounted that idea at least a decade ago. Climate models consistently show that “committed” (baked-in) warming does not happen. As soon as CO2 emissions stop rising, the atmospheric concentration of CO2 levels off and starts to slowly fall because the oceans, soils and vegetation keep absorbing CO2, as they always do. Temperature doesn’t rise further. It also doesn’t drop, because atmospheric and ocean interactions adjust and balance out. The net effect is that “temperature does not go up or down,” says Joeri Rogelj, director of research at the Grantham Institute—Climate Change and Environment at Imperial College London. The good news is that if nations can cut emissions substantially and quickly, warming can be held to less than 1.5 degrees C.

To avoid that threshold, the world can emit only a set amount of CO2 from now into the future. This quantity is known as the carbon budget. In 2019, the year before the Covid-19 pandemic depressed the global economy, the world discharged about 42 gigatons of CO2—similar to the 2018 level and to what is happening in 2021. According to the midrange scenario in the Intergovernmental Panel on Climate Change’s comprehensive report released in August, “Climate Change 2021: The Physical Science Basis,” another 500 gigatons of CO2 emissions will raise global temperature by 1.5 degrees C. Nations have about 11 more years at current emissions rates—2032—before exhausting the budget.

That threshold moves further into the future, however, if countries significantly reduce their output very soon. Aggressive policies, now, can create more time and more hope for preventing catastrophe. In a 2018 report, the IPCC stated that the world had to achieve net-zero carbon emissions by 2050 to keep warming to 1.5 degrees C. To get on that track, the September UN report says, nations have to cut emissions in half by 2030. Every year of delay brings the world much closer to the edge of the precipice. “We are not trying to hit the temperature targets,” says Rogelj, who is also a senior research scholar at the International Institute for Applied Systems Analysis and a key author of the 2021 IPCC report. “We are trying to stay as far away from the edge as possible.” 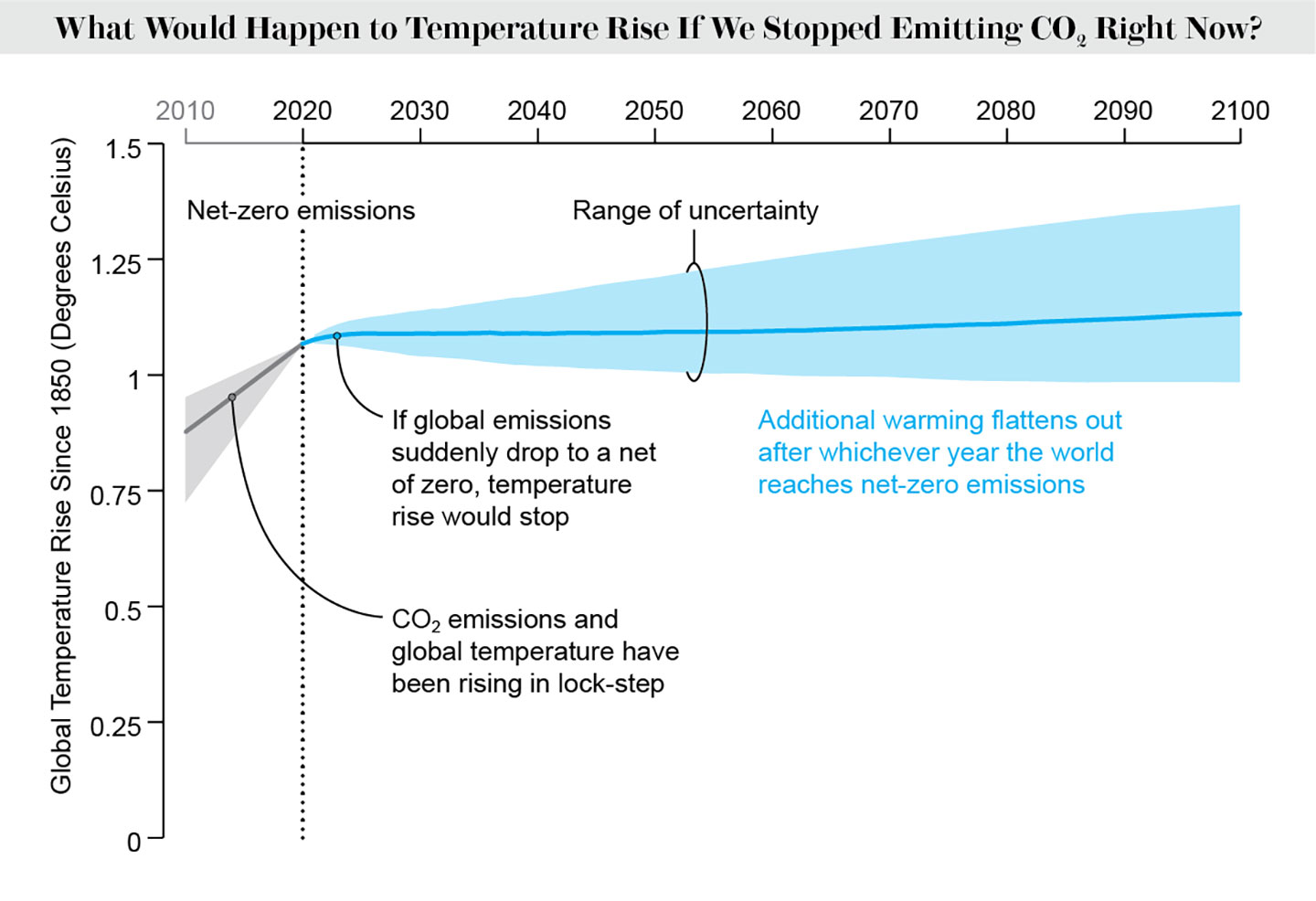 If nations fall short and the temperature rise surpasses 1.5 degrees, it will still be crucial to make immediate and ongoing reductions to stay below 2.0 degrees C of warming, a level at which scientists say impacts become more dire and exceedingly difficult for societies to cope with. To avoid that threshold, the world can emit only another 1,350 gigatons of CO2, according to the August IPCC report. At 42 gigatons a year, that happens by 2052. Again, if countries greatly reduce emissions soon, that date extends forward, too.

If countries do not make significant reductions this decade, the subsequent cuts needed to limit temperature rise to 2.0 degrees will be much tougher to achieve. “Every single year that passes imposes a huge penalty for the future reductions that would be required,” says Josep Canadell, chief research scientist at CSIRO, Australia’s national science agency, and a lead author of the 2021 IPCC report.

It is also important to understand, Rogelj says, that each added 10th of a degree of warming beyond 1.5 degrees C brings greater risk of damaging weather, sea-level rise, and other ills to more ecosystems and more people, especially the most vulnerable. He likens the increasing risk to jumping from a platform that today may be a meter high: Healthy adults might hit the ground without injury, but small children and the elderly will get hurt. Each additional 10th of a degree raises the platform. “At two meters,” Rogelj says, “many more people are likely to get injured. And at a certain height, everyone will be severely harmed.”

The IPCC’s carbon budget analysis includes a measure of uncertainty—roughly 15 percent up or down. And the midrange scenario means nations have a 50 percent chance of keeping warming to 1.5 degrees if they restrict future emissions to 500 gigatons. To improve the odds to 83 percent, the IPCC says, the budget drops to 300 gigatons. The numbers get even tighter if nations continue to burn down rain forests because there will be less vegetation drawing CO2 from the atmosphere. Countries have to consider societal factors as well, such as being sure to spread any economic challenges from emissions cuts fairly on citizens.

Of course, if the world reduced emissions only marginally and never reaches net zero, “atmospheric CO2 concentration will continue to increase, and temperature will continue to rise,” says Susan Solomon, a professor of environmental studies and atmospheric chemistry at the Massachusetts Institute of Technology, who has contributed to many climate change reports.

The dialogue leading up to COP26, where countries will try to encourage one another to commit to greater emissions reductions, is focused on CO2. But the atmosphere is affected by other greenhouse gases such as methane and nitrous oxide, by climate feedbacks such as disappearing sea ice, and by aerosols—small pollution particles released primarily from the burning of fossil fuels. If CO2 emissions remain at current levels, but methane emissions rise and other feedbacks get stronger, the world will warm by 1.5 degrees C before 2032 and by 2.0 degrees C before 2052. The IPCC scenarios include some level of additional warming from these factors. They do not include any so-called negative emissions by machines that pull CO2 from the sky, because the economic viability of those systems is just too uncertain, Canadell says.

The UN report uses a different metric to account for other greenhouse gases, called “CO2 equivalent”—a quantity that represents warming from CO2 as well as methane, nitrous oxides, and other gases such as hydrofluorocarbons. But its analyses parallel the IPCC’s. As of July 30, the UN report says, 113 of the 191 nations that signed the Paris Accord had made some level of commitment to reduce emissions. Under the latest promises, global emissions by 2030 would actually be 5.0 percent higher than in 2019—not lower—in the midrange scenario the IPCC uses. The report notes that emissions from the nations that have issued revised goals since 2015, as a group, would indeed be lower in 2030 compared with 2019, so the net increase worldwide would come from the countries that have not improved their original commitments and countries that have never committed.

At current emissions rates, the UN report says, the world would use up 89 percent of the remaining 1.5 degree C budget by 2030 and 39 percent of the 2.0 degree C budget by 2030. On October 25, a week before COP26 begins, the secretariat was to count any additional country updates made since July 30. Eyes will be on the G20 nations—19 nations plus the European Union that together account for about 90 percent of gross world product. The G20 nations are responsible for about three quarters of global emissions, according to Taryn Fransen, a senior fellow at the World Resources Institute who studies nations’ long-term climate strategies. She is eager to hear how countries will fulfill their promises, known as nationally determined contributions, or NDCs. The net-zero goals are important, Fransen says, “but each country has to actually get there.”

To get there, nations have to jump—now. Some scientists are starting to use the old climate change language to highlight what has to be done. The warming factor that is baked in “is human infrastructure,” Solomon says. If countries let the current stocks of coal plants, natural gas facilities, transportation systems, industrial complexes, and buildings live out their natural lifetimes, they commit to a certain amount of additional warming. There is also a lag time in stopping temperature rise, she notes, “a lag in human action—the slow response of people to the problem.” The practical question, says Raymond Pierrehumbert, head of the Planetary Climate Dynamics Group at the University of Oxford, is: How quickly can the world scrub greenhouse gases out of the global economy?