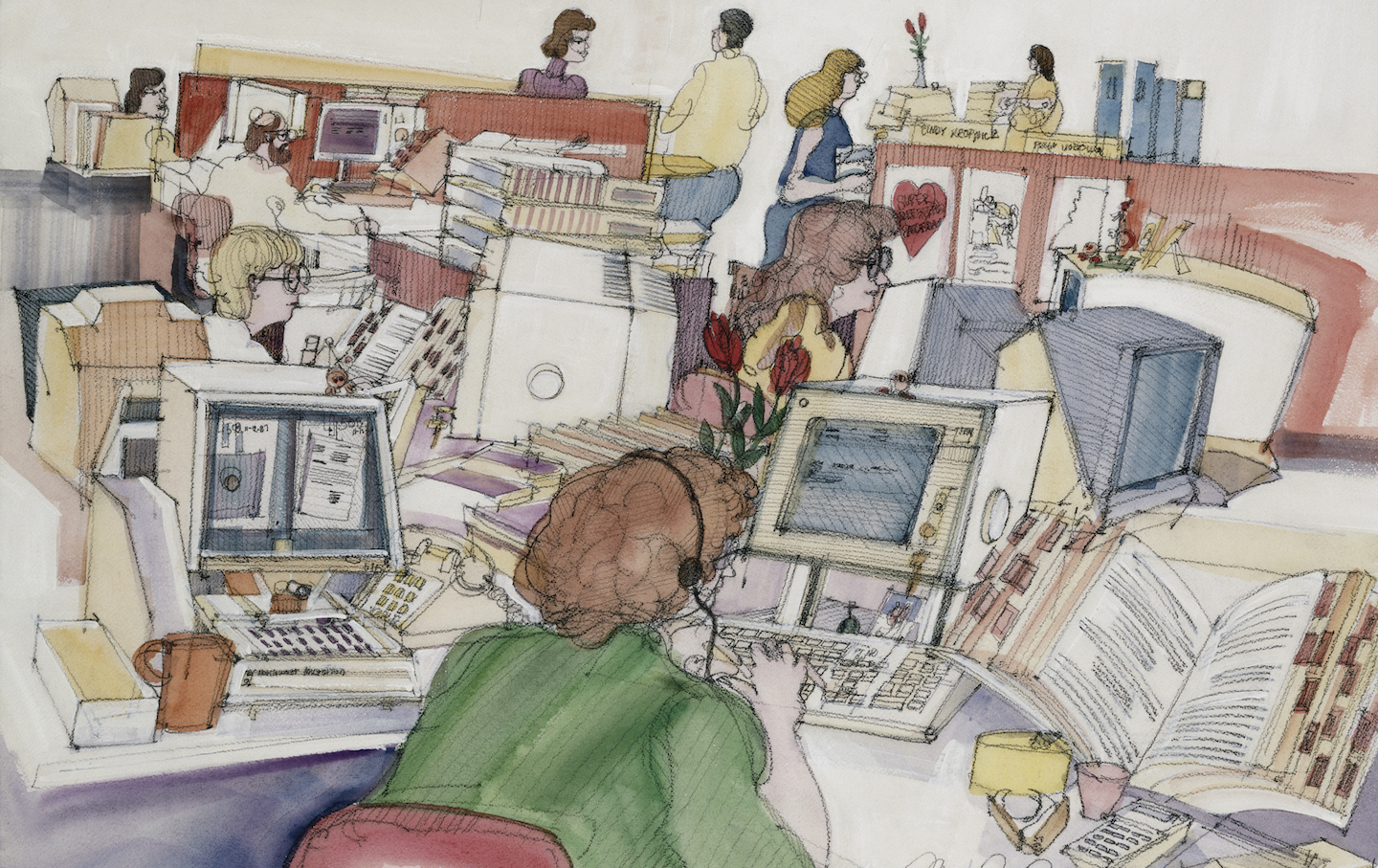 I do not, generally speaking, enjoy reading novels whose protagonists both live and think like I do. I’m already doomed to a lifetime in my own head. When I read fiction, I want to visit minds that operate differently from my own. As a result, I was initially put off by how swiftly I saw myself in the unnamed protagonist of the Australian writer Kavita Bedford’s debut novel, Friends and Dark Shapes, and yet I kept reading. Not until several chapters into the novel did I realize that I was reacting to a very specific point of connection between her fictional life and my real one—she’s a freelance writer.

Specifically, she, like me, is freelance by choice: not a laid-off journalist or a parent juggling writing with domestic duty, but a childless millennial opting in, for a mix of reasons, to the gig economy. Her assignments are not the novel’s background, nor does her choice to write lead to grand arguments about writing. Instead, Bedford puts her narrator’s mundane freelance problems—When will she get paid? Is her editor exploiting her? Should she accept a dicey assignment?—at the novel’s core.

Bedford is refreshingly committed to portraying writing not as a calling or craft but as work. She shows freelance writing as a form of what the journalist Sarah Jaffe, in her recent book Work Won’t Love You Back, calls “hope labor”: toil performed in the hope of stability, prestige, and fulfillment down the line. Bedford devotes several chapters to differentiating this sort of labor from Uber driving and other app-based forms of work that do not promise to lead to steady or permanent employment. Still, both she and her narrator understand well that hope labor’s promise is often false. The narrator isn’t a cheerleader for her peripatetic work life; she hasn’t bought in to the pernicious idea that, as Jaffe puts it, “not having a job is liberation,” when, in fact, not having a job creates the conditions for burnout, exploitation, and abuse.

It bears noting that, for this reason, I find it tricky to speak of freelancing as a choice. The mere existence of freelancers is the result of a media ecosystem that creates far too much space for us. Yet literary fiction, in its quest to mirror life as we live it, deals in personal decisions, even when it acknowledges those decisions’ structural underpinnings. It is no knock on Bedford, then, that she directs Friends and Dark Shapes not toward the broad social implications of freelance work or toward solidarity across the vast spectrum of the gig economy, but on the practical and ethical problems it poses for the narrator. Ultimately, the novel asks a question that is rarer than it should be in fiction, if infinitely common in life: not how should we handle our lives, but how should we handle our work?

Bedford devotes the first chapters to establishing the conditions of her narrator’s life, which is vital in a novel preoccupied with class and labor. (Vital in any novel, arguably, but not every writer bothers.) In the first scene, the narrator, who has been living at home while caring for her sick father, moves in with three friends shortly after her father dies. Her new house is in an area where, as kids, she and her roommates “weren’t allowed to go”—a coy phrase, since it indicates not only that the neighborhood is gentrifying but also that the narrator comes from some privilege. Within pages, we know this will not be a survival story. Instead, it occupies a hazier space, one in which need, choice, insecurity, and aspiration shift and blend.

Often, Bedford uses the narrator’s neighborhood to manifest these complex dynamics. Several times in the novel, the narrator, who is a mixed-race Indian Australian, worries that the white boys down the block, who “blare Aussie hip hop and wave the national flag,” could harm her or her housemates Niki and Sami, both first-generation Australians. At the same time, she acknowledges that her own presence poses a threat to the neighborhood’s longtime Indigenous inhabitants, whom the city wants to expel. She is acutely conscious that her safety, partial though it may be, comes indirectly at somebody else’s expense. She’s also conscious that she can’t afford to live elsewhere, which complicates the issue still more.

Early in the novel, the narrator announces that she’s begun freelancing “to pay the rent.” On its face, this statement presents her work exclusively in terms of need, but hope hides within, as does an understanding of her own class position. We never learn how the narrator gained entry to the often baffling, often gate-kept media world, which points to a certain level of access in her background. Sami, a lawyer, directs us to the same; when he teases his culture-worker friends, including the narrator, for being broke “by choice, not necessity,” the narrator doesn’t push back, though for many writers and artists, freelance or not, this claim could not be further from the truth. It’s also not as simple as Sami makes out. In Work Won’t Love You Back, Jaffe, paraphrasing the political theorist Adam Kotsko, notes that “the rhetoric of choice [implies] the acceptance of personal responsibility—and the attendant blame if your choice doesn’t work out.” Bedford’s narrator, destabilized by grief, is unwilling to accept responsibility in any arena of life: She drifts from her boyfriend, won’t decorate her room, can’t commit to owning a bike. In terms of work, she’s not ready to accept either part of Kotsko’s equation. She doesn’t want to be responsible, but she also doesn’t want to question Niki’s frequent assertion that their lives “will work out; we are so lucky.” Even while grieving, she shares the hopeful self-confidence that Niki’s statement puts on display. Among the novel’s questions is whether she should.

Freelance writers, like artists, adjunct professors, and others, are members of what Jaffe calls the “precarious workforce,” even if some writers are reluctant to identify their craft as inglorious work. A form of this reluctance has appeared online in recent weeks, as a shrinking group of freelance writers protest the Protecting the Right to Organize Act’s planned classification of freelancers as workers with the right, under some circumstances, to unionize with their staff-job counterparts. Too often, their objections boil down to some version of I get paid for my talent, not my labor—a self-aggrandizing claim at best, and one that I admit baffles me. A piece of writing, in the modern era, may not be a physical object, but it is as deliverable a product of labor as a loaf of bread or a pair of shoes. Talent isn’t entirely outside the equation, but I promise, nobody has ever paid me for a brilliant review I didn’t file. I know perfectly well the exchange I so often make: I have an idea, strain and suffer and spend time putting it into language, and trade that language for a check. Work for pay. Bedford’s narrator sees our shared toil in similar terms.

She does not self-glamorize or self-mythologize. She dwells far less on her writing’s quality than on its precarity; at one point, she declares to herself that freelancing is “not a way of working that can last.”

So why has she chosen it? Why have I? My reasons are simple, or feel simple to me: I started to supplement my income at a nonprofit job, liked the work, and kept going to supplement my PhD stipend. Bedford keeps her narrator’s logic vague. Throughout the novel, she implies that the narrator is using freelance work as a gradual reentry to what she calls the “day-to-day world,” a way to support herself while concentrating a significant percentage of her attention on grieving for her dad. Grief is the novel’s emotional weather: rarely discussed at length, but often fleetingly mentioned, and always present if the reader cares to look. Bedford’s sentences have a syrupy, slowed-down quality, as if dragged out of tempo by melancholy. This effect works beautifully—better, in fact, than the few moments when her narrator meets grief head-on, which tend to be halting or choked. Discussing emotion is a real and often insurmountable challenge for the narrator. Perhaps in contrast, discussing politics, even the fraught politics of class and privilege, comes naturally.

But grief is not the only available explanation for the narrator’s choice to freelance. Bedford, slowly but surely, turns the novel toward a new interpretation. In the final sections, the narrator and her friends begin aspiring less to professional success and more to internal transformation. Sami takes a job at a law firm in Dubai, which he presents as a possible step toward leaving law entirely. On hearing this, the narrator tells him she hopes the move will help him “change the way his mind has become wired here.” Though she never leaves Sydney, she dreams of the same shift for herself, imagining that she might begin living without “striving…to be someone.” At the novel’s end, she and Sami are searching, if subtly, for exits from what the British theorist Mark Fisher called “capitalist realism”: the inability to conceive of life outside the regime of neoliberalism. Fisher challenged his readers to abandon their “romantic attachment” to failed or precarious present conditions, asking them instead to romanticize—and, crucially, fight for—new ways to work and be. Friends and Dark Shapes is a portrait of one woman launching into that process. At the novel’s end, she is still freelancing; she’s discovered her desire to commit to a different life but has no idea what it will be. Her closing action is smaller, in the novel’s terms, than abandoning her self-employment: She moves into a new apartment. Bedford leaves her readers to hope that move will be the first of many.