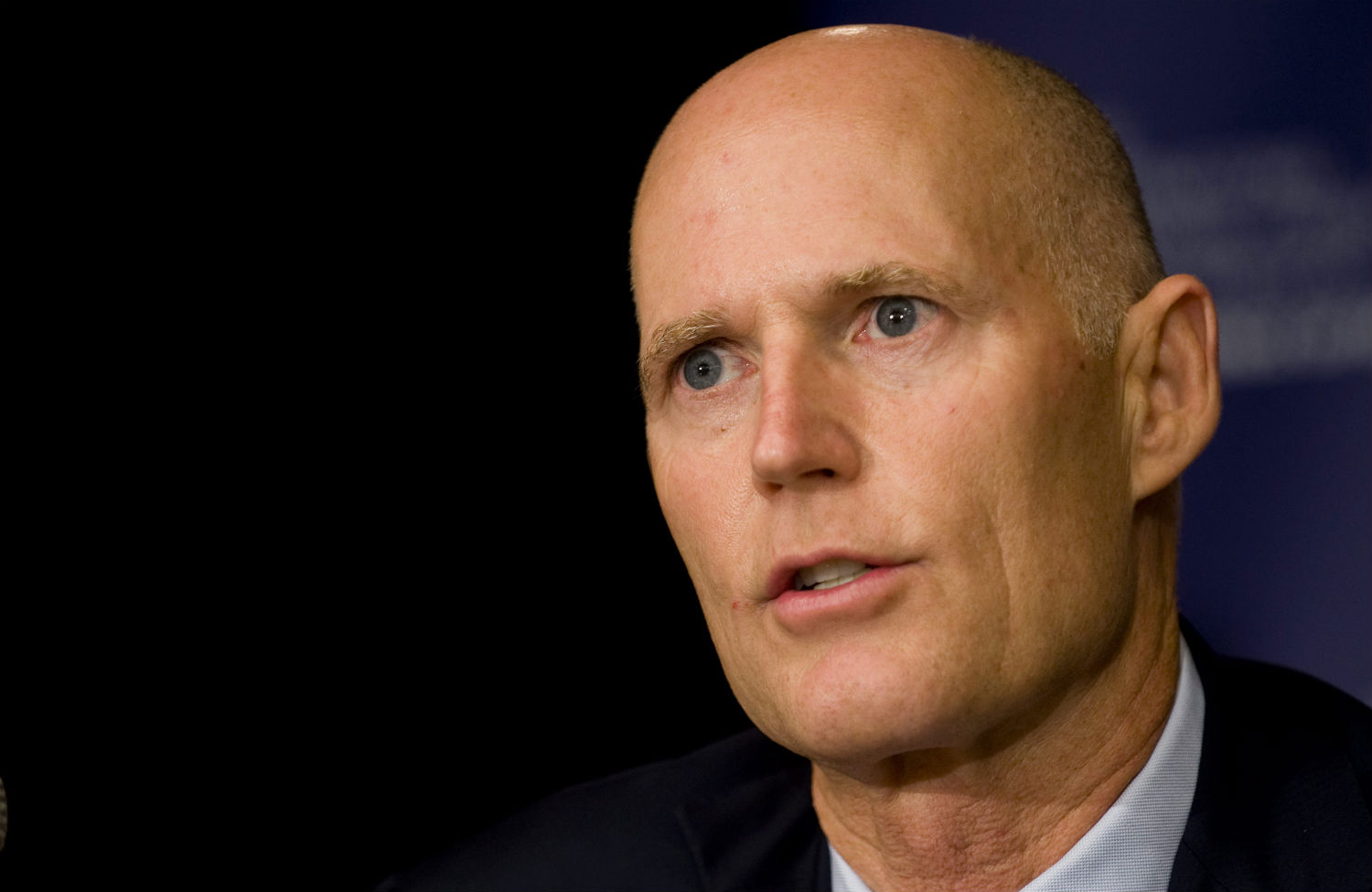 UPDATE (4/21): The ACLU has just announced that the Supreme Court has declined to hear the case, the appeals process has effectively ended, and thus the Appeals Court ruling against the drug-testing policy remains the final word. We’ll continue tracking the issue to see whether the court rulings affect similar policies proposed in other states:

Today, the United States Supreme Court announced that it will not hear an appeal from Florida Governor Rick Scott seeking to overturn an 11th Circuit Court decision that declared unconstitutional the Governor’s Executive Order mandating that state employees in the Governor’s purview submit to suspicionless urinalysis….

The latest in a series of victories for privacy rights in the state’s costly legal battles in defense of unconstitutional drug testing programs under the Scott administration, the Supreme Court declined to grant Gov. Scott’s petition for writ of certiorari, leaving in place an appeals court decision that the state cannot subject all employees to mandatory urinalysis.  Today’s decision by the nation’s highest court effectively ends the appeals process for the Governor’s Executive Order for across-the-board testing.

Read more about the case on the ACLU of Florida’s site.

It might seem reasonable that Florida’s governor Rick Scott wants to ensure all state agencies are drug-free workplaces; after all, why would you want your taxpayer money going to support the habit of some stoned, slothful bureaucrat? But what is the state really asking for when it demands that each public servant pee in a cup?

When Governor Scott issued an executive order for mandatory drug testing across the state’s entire public workforce in March 2011, the political logic seemed straightforward: “the State, as an employer, has an obligation to maintain discipline, health, and safety in the workplace.” But underlying that seeming moral obligation are some questionable social assumptions. What does a positive test mean when your economic fate hinges on the result? What kind of “discipline” is maintained by subjugating bodily privacy in the name of “public safety”?

Today the Supreme Court is weighing the constitutional question the policy has evoked: When your boss is the state, can the “drug-free workplace” be a Fourth Amendment free zone?

The Supreme Court is considering whether to take up Scott v. American Federation of State, County and Municipal Employees Council (AFSCME) 79, to review whether the state can legitimately administer “drug testing in the absence of reasonable suspicion of drug use,” based on the state’s interest in ensuring a drug-free workplace for 85,000 state employees and applicants for state jobs.

Scott’s Supreme Court petition attempts to revive the issue following a series of lower-court defeats. AFSCME, representing tens of thousands of public servants, filed a legal challenge in May 2011 contending that the testing violated Fourth Amendment protections from unreasonable searches, and that the state had offered no real safety-related reason for such a broad testing requirement. The union argues in its brief, “allowing the state to define its interests at such a high level of generality would create an exception that swallows the rule.”

The federal district court ruled in 2012 that the executive order was an unconstitutional violation of workers’ privacy and the US Court of Appeals for the Eleventh Circuit affirmed that decision. However, while the state has since suspended the policy (and a similar statute passed by the legislature has also been halted), it has been remanded to the lower court for further litigation to rework the mandate. The administration is now trying to revamp the mandate to apply to a narrower set of jobs—mirroring existing policies targeted to safety-related positions, like corrections officers.

The Supreme Court will conference on whether to take up the case or just let the lower-court sausage-making proceed. For now, the main outcome is the Eleventh Circuit’s decision that the original order was unacceptably broad, amounting to, in the words of the court, “a drug testing policy of far greater scope than any ever sanctioned by the Supreme Court or by any of the courts of appeals.”

Labor advocates don’t necessarily object to drug test policies for certain jobs based on specific work-related safety concerns. Rather, AFSCME objects to the sweeping mandate of drug testing the whole workforce and prospective future employees, screening the bodies of school bus drivers and museum ticket vendors alike, for anything from a meth habit to an occasional joint.

In its defense of the policy, the state points out that drug testing is already common in private sector workplaces. But civil libertarians note that the state, unlike a private firm, is bound by Fourth Amendment restrictions on unreasonable government searches.

On top of its crusade for a drug-free state payroll, Florida has also sought to clean up its welfare rolls with a policy of mandatory drug testing for welfare applicants. The law, enacted by the legislature in 2011, was ultimately struck down in federal court. But it also sparked a national outrage (and some notable satire), because it invoked the classic Reaganite trope of public aid recipients as undeserving miscreants looking to “game the system.” The stereotype has historically been reflected in the image of black “welfare queen,” or more recently, in the underworked, overpaid state bureaucrat. Nationwide, lawmakers have glommed onto this convenient political logic of drug-screening people involved with public assistance programs, with recent proposals for mandatory testing in Texas, Pennsylvania, Washington and other states.

Whether the urinalysis dragnet targets people seeking government support or those delivering public services, the presumptions underlying mandatory testing feed into the oppressive stigma of being tied to the public system, which in turn stokes public mistrust and backlash against government itself.

Shalini Goel Agarwal, an ACLU of Florida attorney who is working on the case, says that for welfare recipients, blanket drug-testing reflects “an assumption that if they’re relying on public benefits, must be because those folks are at fault in some way, it’s because they’re using drugs…. The facts don’t seem to bear out the stereotype, but there is this kind of villainization that’s going on.”

Historically, drug testing in both public and private workplaces has been controversial, not only because of its physical intrusiveness, but because it is often just inaccurate. Civil liberties groups point out the risk of botched results and false positives. Moreover, arbitrary surveillance of workers’ behavior through invasive tests can have a toxic impact on the workplace social environment.

In some cases, the data debunks the political rhetoric it was supposed to bolster. Advocates cite research data on welfare applicants suggesting that impoverished people actually live pretty clean: only about 2.5 percent of the applicants tested had positive results, compared to a rate of about 9 percent for the general population. Similarly, testing of employees and applicants at the state Departments of Transportation, Juvenile Justice, and Corrections showed positive results ranging from less than one percent to about 2.5 percent.

But whatever the data say, labor advocates argue that the state has crossed a constitutional line in both privacy and labor rights in its workplaces.

Many of the legal challenges to drug-test policies, Agarwal notes, have been led by unions, because “individual employees are scared to come forward, they’re scared for their own job security, they’re scared what’s going to happen to them and their families, and so they don’t come forward. And the only way effectively to get at this issue and to challenge the employers head on is to do it through the union.”

While labor has effectively resisted Florida’s effort to track drug use in its workforce, the draconian testing policy has exposed the government’s problem with data abuse. The behavioral policing of workers and the poor tells us little about their social values, but reveals much about how supposed “public safety” interests at the center of power can become a tool for invading bodily privacy at the social margins.