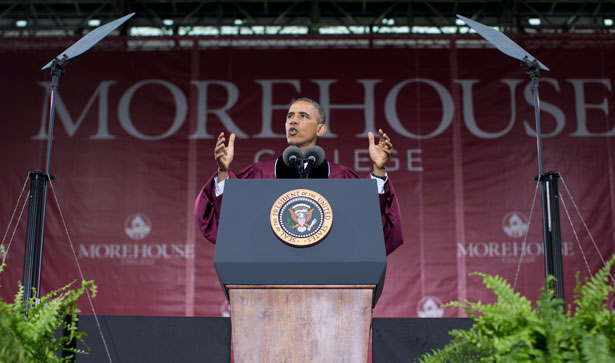 Last year, President Obama delivered the commencement address to the 2013 graduating class at Morehouse College, a campus steeped in legacy. From the hallowed grounds of Dr. Martin Luther King Jr.’s alma mater, President Obama’s deeply personal message about race, leadership and obstacles reverberated with an elevated poignancy at Morehouse. The crowd of young men on the cusp of their futures could have had no better speaker than the first black president of the United States, and his rousing message to overcome fear echoed Dr. King’s thoughts when King was a student there: “I realized that nobody…was afraid.”

College campuses do just that—nurture confidence in young Americans, afford them a space to express themselves and explore what is important to them, and instill in them a powerful voice, even if that voice calls for dissent. In his address, Obama spoke to the tremendous potential of courage in young college students: “here…young Martin learned to be unafraid. And he, in turn, taught others to be unafraid. And over time, he taught a nation to be unafraid.” It was during college, the president explained, that King was “introduced to the writings of Gandhi and Thoreau, and the theory of civil disobedience. It was here that professors encouraged him to look past the world as it was and fight for the world as it should be.”

If Dr. King’s fearlessness indeed found its wings during his time at Morehouse, this virtue was deservedly celebrated by our president. It was a lesson he hoped Morehouse graduates could glean inspiration from, and one that could surely resonate with college students across the country, especially since demonstrating courage on a college campus is becoming increasingly difficult. A report published earlier this year by the Foundation for Individual Rights in Education found that nearly 60 percent of higher education institutions in the United States are institutionally suppressing free speech through codes that infringe on First Amendment protections.

When the president takes the stage in June to address graduates at the University of California, Irvine, he would be best served to take a hard look at last year’s Morehouse notes. UCI may not provide the same historic platform for the president that Morehouse did, but the UCI administration’s egregious blow to student rights in the “Irvine 11” episode is a dark mark that looms over the school’s abbreviated history—one that the president should not ignore.

On an otherwise humdrum September day in 2010, eleven students decided to interrupt Israeli Ambassador Michael Oren while he was giving a lecture on campus. In timely succession, the eleven students shouted to interrupt Oren but did not issue any threats and were escorted out without resistance. Oren was able to finish his speech. What followed will long be remembered as the onerous, punitive lesson a handful of students were forced to learn about the costs of dissent against Israel.

The students were thoroughly roughed up by the school’s administration in disciplinary measures, despite protest being a time honored tradition of a politically active campus. Not only were the students suspended by the university, they were charged with criminal misdemeanors for the crime of “conspiracy to disturb a meeting” and were prosecuted by the Orange Country district attorney in a trial that garnered national attention. The trial culminated in an unsurprising verdict—the students were found guilty. And the university went so far as to an issue an unprecedented decree to ban an entire student group, the Muslim Student Union (MSU), for the first time in UCI history because anonymous sources loosely connected the group to the protest. The MSU had more than 250 registered members and was an integral part of the vibrant campus community. A nonviolent student protest on the Israeli-Palestinian issue resulted in the disciplinary suspension of an active student group and criminal proceedings for students who were unafraid enough to speak up. (Read more about how the “Irvine 11” and the MSU were run through the wringer and why.)

The activists, dubbed the “Irvine 11,” had chanced into their roles as vanguards for first amendment rights on college campuses, but the UCI administration, its influential friends and the local authorities effectively vilified the group of impassioned student activists, quelled free speech and attempted to intimidate the student body to tread with more caution when speaking out for a cause.

Thousands of UCI students and graduates will gather to hear the president address them on June 14. There may be some in the crowd who spent four years crouching away from conversation on contentious issues, who shied away from joining a scrutinized student group or who sat tight-lipped despite the fire inside them. Some of these students may have been watching from the sidelines when school administrators made an example of their fellow classmates and laid waste to free speech rights.

In his commencement speech at the University of Michigan in 2010, Obama spoke to the importance of debate—a nod to the protestors decrying him outside the stadium as well as the intensifying political clashes in Washington, saying, “It may make your blood boil; your mind may not often be changed. But the practice of listening to opposing views is essential for effective citizenship.” At UCI, the President should issue a sharp reminder to the university—the protection of free speech is paramount on a college campus.

Two decades ago while studying at Occidental College in Southern California, a young Barry Obama donned the activist get up himself—picket signs, obnoxious chants, vigils—the whole nine yards. As the president can surely attest, college is a bastion for boundless self-expression that fosters the formation of identity, purpose and often times, trajectory. The suppression of student voices and silencing of opposition not only stifles campus life and severs personal growth but produces disengaged and ignorant citizenship. Diversity of thought is integral to a stimulating learning environment where thought-provoking discourse and the vibrant exchange of ideas flourish. Students should be empowered by being reminded that they are agents of change, and that their opinions have merit—however unpopular they may be. It would behoove the president to recall that the lesson that Dr. King left for the students at Morehouse was built on his opportunity to learn how to be unafraid. Every college student deserves the opportunity to buck fear and give rise to the same kind of revolutionary courage.