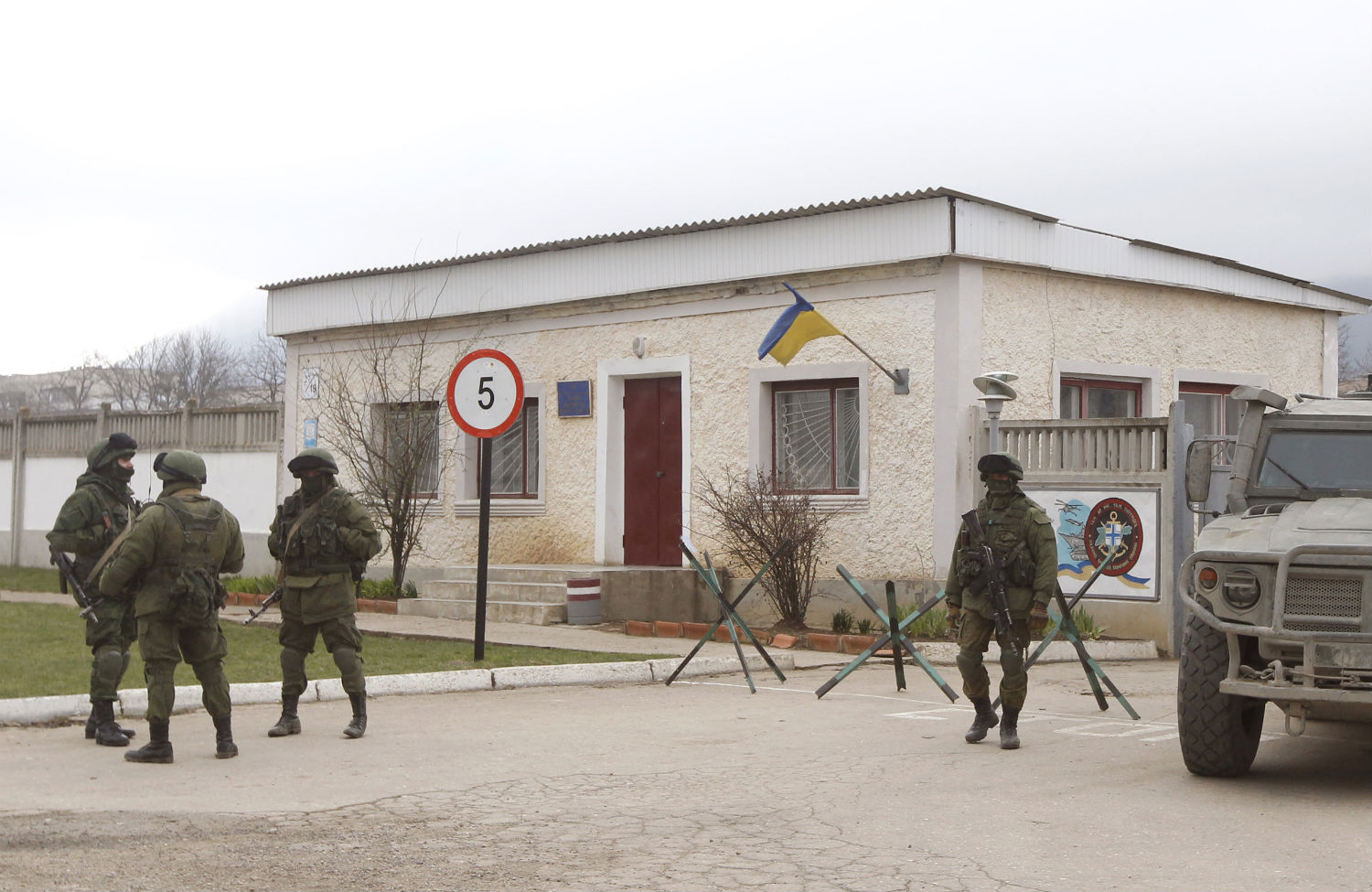 The Russian seizure of Crimea—and let’s face it: it’s a done deal—is not a good thing for world peace and stable international relations. By this weekend, when the provocative referendum takes place (under Russian military occupation, of course, and contrary to Ukraine’s constitution), Vladimir Putin will have a fig leaf of democratic support for his Crimea operation. But it will lead to howls of outrage from neoconservatives, hawks and pro-NATO advocates inside the United States. As a result, it will be exceedingly difficult for President Obama and Secretary of State John Kerry to engage in creative diplomacy with Russia on issues including Syria, Iran and Afghanistan.

But does that mean that the United States should call for a revolution in Russia? Bring Ukraine into NATO? Step up military exercises all across Eastern Europe? Take steps to permanently isolate Russia’s economy? No, of course not. But that’s what the hawks are calling for.

Inside the White House, Obama may be thinking: Okay, let Putin have his gosh-darned Crimea, and let’s get on with it. But he can’t, and won’t, ever say anything like that. As time goes on, Obama will be buffeted by his ever-present right-wing critics over Ukraine, and those critics will use every opportunity to propose and defend a long list of aggressive steps that the United States can take in response—steps that, while they’ll do nothing to reverse Putin’s indefensible Ukraine policy, are laundry-list items that they want anyway. And given Obama’s all-too-frequent willingness to meet his critics halfway, they just might get them.

Among Republicans, the libertarians and so-called “realists” have cut Obama some slack. Robert Gates, the discredited former CIA chieftain who was picked as secretary of defense by George W. Bush and then inexplicably retained by Obama, told a shocked Fox News host, Chris Wallace, that Crimea is “gone”:

“I do,” Gates replied. “I do not believe that Crimea will slip out of Russia’s hand.”

He’s no doubt right about that. Henry Kissinger, the über-realist (and butcher of Vietnam) suggested in an even-toned op-ed in The Washington Post that rather than fight over Ukraine, the United States and Russia ought to see the country “as a bridge between them,” and he said that Obama and Putin shouldn’t “compete in posturing.”

And the Pauls, father and son (Ron and Rand) have pretty much written off Ukraine and told their fellow Republicans—provided that the GOP still considers the Pauls to be members in good standing with the GOP—to lay off Ukraine. According to Daddy Paul, who no doubt would rather go about the business of getting rid of the income tax and abolishing Medicare and Social Security, Americans are “sick and tired of the U.S. government getting involved in every crisis that arises.” (His column was entitled: “Leave Ukraine alone!”) For good measure, appearing on the propagandistic Russian outlet RT, Paul said that it was “global bankers” who want the United States to get involved in Ukraine. And Paul fils, the senator from Kentucky, commented intelligently, in an interview with The Washington Post: “Some on our side are so stuck in the Cold War era that they want to tweak Russia all the time and I don’t think that is a good idea.”

But then: guess what? Under pressure from hawks, who don’t like the Pauls’ libertarian/isolationist POV, Rand Paul decided that, oops, we really do need to punish Putin, big time. In a Time magazine op-ed, Paul said:

Vladimir Putin’s invasion of Ukraine is a gross violation of that nation’s sovereignty and an affront to the international community. His continuing occupation of Ukraine is completely unacceptable, and Russia’s President should be isolated for his actions.… Putin must be punished for violating the Budapest Memorandum, and Russia must learn that the U.S. will isolate it if it insists on acting like a rogue nation.

And then, wow! Paul backed every single measure proposed by hawks to “punish” Putin, including tough economic sanctions, reinstating the missile defense shield in Eastern Europe, imposing bans on visas for Russian officials, expelling Russia from the G-8 and more.

Of course, the pressure from the hawks on someone like Paul is effective because Rand Paul wants to be the Republican nominee for president in 2016, the chances of which are less than the chance that Putin will give Crimea as a gift to Poland. But Obama, too, is under pressure from hawks, and it isn’t at all clear that he won’t listen. Not that Obama will use the military against Putin, but he might give the hawks a few of the items on their laundry list.

And the hawks are lining up. Besides Paul, other would-be candidates for the GOP presidential nomination have weighed in, too, including Rob Portman and Bobby Jindal. Writing in Forbes, Portman, not generally regarded as a foreign policy expert, issued a call for strengthening and expanding NATO, including in Ukraine:

Increased training exercises with our NATO allies will improve interoperability between our forces and reassure them of our commitment. In addition, we should ensure that NATO’s doors remain open to all who qualify for membership; NATO should stand with countries that choose a democratic path and whose forces serve alongside NATO troops in Afghanistan and elsewhere.

An editorial in The Wall Street Journal suggests that the battle of Ukraine be carried directly into Russia itself. “Kiev’s best revenge would be to become an inspiration for Russia’s freedom fighters,” it says, citing the visit to Kiev by the former Russian oligarch, Mikhail Khodorkovsky. Said the editorial:

The former Yukos oil tycoon, who spent a decade in Mr. Putin’s prisons for trying to create political competition in Russia, has spoken little in public since his December release. So it was all the more remarkable that he chose Kiev’s revolutionary square for his coming out party. “Glory to the people of a new and democratic Ukraine!” he began. Before he could go on, the crowd chanted “Russia, rise up!”

Vladimir Putin isn’t playing by Mr. Obama’s idea of 21st-century rules. The right response to a Russian power play is a power play of our own. Ballistic missile defenses on NATO’s eastern flank would be a good place to start.

While going to war with Russia over Ukraine is unthinkable, the U.S., Britain, France and Germany should at least mitigate the damage to the cause of non-proliferation and international law by imposing the most robust set of economic, financial and diplomatic sanctions on Moscow.

You can’t swing a dead cat in Washington without knocking over another advocate for getting tough with Putin. They include Charles Krauthammer, the ubiquitous Fred Hiatt and Eric Edelman, who, writing in The Weekly Standard, wants NATO to get involved in boosting Ukraine, and who concludes with this sweeping call for remilitarizing the United States and NATO:

A…necessary step is to strengthen NATO’s deterrent posture and ability to reassure allies. Reinforcing the NATO air policing mission in the Baltics is a good beginning, but this will also require a thorough reconsideration by the alliance of the self-abnegating undertakings it assumed at the time of the NATO-Russia Founding Act in 1997. The alliance should consider whether and how it wants to position ground combat forces on the territory of the former Warsaw Pact states that now are members of NATO. It should also reconsider the so-called three no’s—no intention, no plan, no reason to deploy nuclear weapons on the territory of the new NATO members. Bringing NATO military power closer to the borders of Russia would impose a real cost on the Russian military and might cause nationalists who support Putin’s current course to reconsider. All of this would need to be accompanied by a large increase in the defense budget, much like the one Jimmy Carter obtained after the Soviet invasion of Afghanistan. A jolt to the budget—at least to the levels proposed by Secretary Gates in 2011—would signal an end to the relative decline in U.S. military power over the past four years that, in Secretary Hagel’s words, has meant that “we are entering an era where American dominance on the seas, in the skies, and in space can no longer be taken for granted.” That would send a powerful and unwelcome message to those in both Moscow and Beijing who are betting on the end of the unipolar world.

Let’s hope that Obama was too busy with his appearance on “Between Two Ferns” to have paid attention to Edelman.