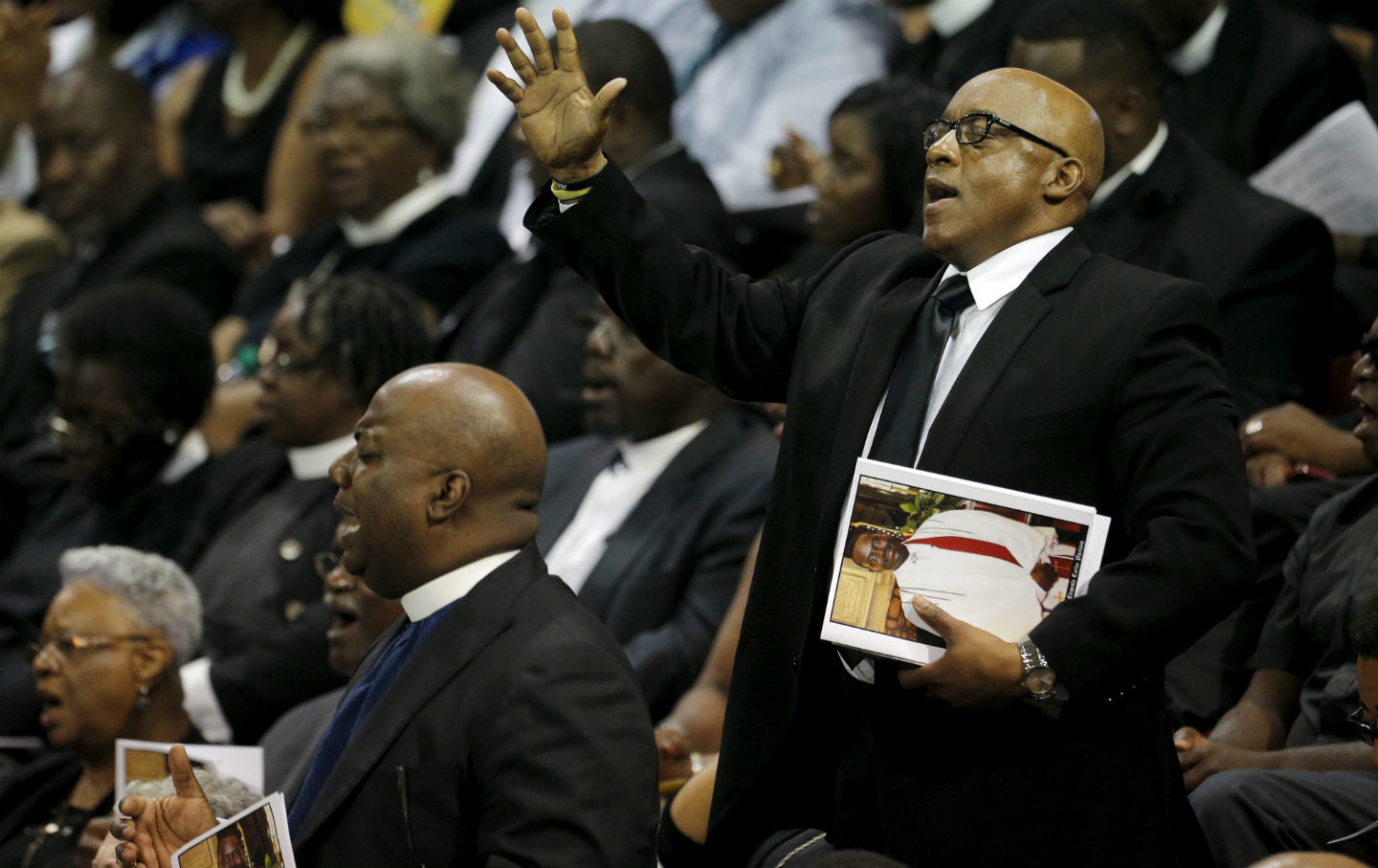 Clergy sing along with the choir ahead of funeral services for the Reverend Clementa Pinckney in Charleston on June 26, 2015. (REUTERS/Brian Snyder)

Standing at the Lincoln Memorial on January 19, 2009, President-elect Barack Obama said this: “Directly in front of us is a pool that still reflects the dream of a King and the glory of a people who marched and bled so that children might be judged by their character’s content. And behind me, watching over the union he saved, sits the man who in so many ways made this day possible.” As Obama spoke, some wondered if his presidency signaled that the nation was no longer divided by the legacy of slavery. Many at least hoped that a new age was being ushered in, perhaps a “post-racial” age in America, not defined by W.E.B. Du Bois’s “color line.”

Trying to Forgive the Black Church

But in late June, some six years and at least four speeches on America’s racial divide later, President Obama again held the nation’s attention as he addressed a tragedy that would be all too familiar to those of Du Bois’s generation. As President Obama stepped into a pulpit to console a family and a nation after a hate-filled young man allegedly killed nine black parishioners and their pastor, he also called the country to account for its racist legacy. While disconcerting, it is fitting that the president delivered what The New York Times called “one of his presidency’s most impassioned reflections on race” during his eulogy to the Rev. Clementa Pinckney, for in that moment he embodied the best of the black church.

Historically, the black church has been that institution that has filled in the social, economic, and educational gaps left by the legacy of slavery in America. The church has been what Du Bois called both a “religious center and social center” for black people, or what sociologist E. Franklin Frazier described as a “nation within a nation.” It has been nothing less than a lifeline for black people as they have struggled to survive the hardships of racial injustice in America.

And it has been more than that.

Born within the crucible of slavery and grounded in the belief that all people are created in the image of a just and free God, the black church has contested any notion that black bodies were not meant to be free. In so doing, it provided a sanctuary for black women and men to escape the daily attacks upon their free humanity, and simultaneously affirmed that sacred humanity and God-given right to be free. This theology has vast implications, and the families of those slain at Emanuel AME church made one of them manifest.

To the surprise, if not consternation, of some, various family members of the murdered parishioners proclaimed that they forgave Dylann Roof. While the meaning of forgiveness in black church faith is complex, such forgiveness is not about the exoneration of the killer for the deadly injustice he allegedly perpetrated. Rather, it is about the loving justice of God and the liberation of the families from the killer’s sinful act.

Forgiveness recognizes that the love of God is more powerful than white racist hatred.

Forgiveness, in the first instance, recognizes that no human justice can adequately respond to the grave injustice of such a racist, terroristic, murderous crime. Forgiveness, then, is a sign of the families’ faith that God’s justice will ultimately prevail and thus, it frees them from the anguish of knowing that no human justice will make up for the loss of their family members.

Secondly, forgiveness frees the families from being trapped in the cycle of the alleged killer’s hate. Forgiveness is not a palliative for rightful anger and rage; instead, it frees the families from the kind of hate that not only distorts their own sense of self but also prevents them from moving forward in their own living. But most importantly, forgiveness recognizes that the love of God is more powerful than white racist hatred. In the end, forgiveness within the black faith tradition liberates black people to continue to persevere in the struggle for freedom from the sinful realities of white racism.

President Obama declared in his eulogy that the black church is the “beating heart” of the black community, and it is. But as significant as the black church has been to black people, it has also played an important role in the life of the nation. Through persons such as Reverend Pinckney, the black church has consistently led the way in advocating for racial justice and equality in America. And so, when during the eulogy for Reverend Pinckney, President Obama yet again called upon the nation to confront the legacy of slavery in America that is racism, he stood firmly within the black church tradition. He utilized the language of faith to proclaim that we, as a nation, are at a crossroads. The nation has to determine, he asserted, whether it is going to respond to “the grace of God” in the midst of another “terrible tragedy” of racism or remain captive to the “nation’s original sin.” Essentially, he defined this current moment of racist terror in America as nothing less than a “kairos” time.

Kairos time is a period of opportunity. It is often chaotic, a time of crisis. However, it is through the chaos and crisis that God is fully present, disrupting things as they are and providing an opening to a new future—to God’s future. Kairos time is a time bursting forth with God’s call to a new relationship with our very history and sense of self, and thus a new relationship with one another, and even with God.

This is not the first time in America’s history that a president has focused us on a kairos moment in our struggle with the legacy of slavery. Prior to his election, in a speech before the Illinois Republican State Convention, Abraham Lincoln warned the nation that it could not survive, “half-slave and half free.” He continued this theme into his Second Inaugural Address when he recognized that the issue of slavery had the power to destroy the nation. Some 100 years later, in the wake of the increasing violent and hateful resistance to black people’s demands for their civil rights, on June 11, 1963, John Kennedy delivered perhaps his most significant speech on race in America. Calling civil rights for black Americans a “moral issue,” he recognized the way in which the legacy of slavery continued to shape race relations in America. He said, “One hundred years of delay have passed since President Lincoln freed the slaves, yet their heirs, their [grandchildren] are not fully free. They are not yet freed from the bonds of injustices. They are not yet freed from social and economic oppression. And this nation, for all of its hopes and all of its boasts, will not be free until all of its citizens are free.”

So now, here we are more than 150 years after Lincoln and 50 years after Kennedy, with Obama yet again echoing the same themes and issuing the same challenge for America to determine what kind of nation it wants to be. However, unlike Lincoln and Kennedy before him, Obama placed his challenge within the context of the black church. For he made clear that to “slip into a comfortable silence” around the issue of race in America and to “avoid the uncomfortable truths about the prejudice that still infects our society…would be a betrayal of everything Reverend Pinckney stood for.” It would be a rejection of God’s grace, a failure to grasp the kairos opportunity.

One week after his eulogy, at the same time that Confederate flags are coming down, even in the National Cathedral, black churches are burning. While the cause of the fires in some of these churches has yet to be determined (at least two have been declared arsons), the symbolism is clear. Du Bois’s poignant description of the divided soul of the black American also aptly describes America itself. In the words of Du Bois, America is a nation defined by “two thoughts, two warring ideas.” Is it to be a nation defined by the sin of a slavocracy or by a commitment to justice and freedom for all? The answer has yet to be determined.