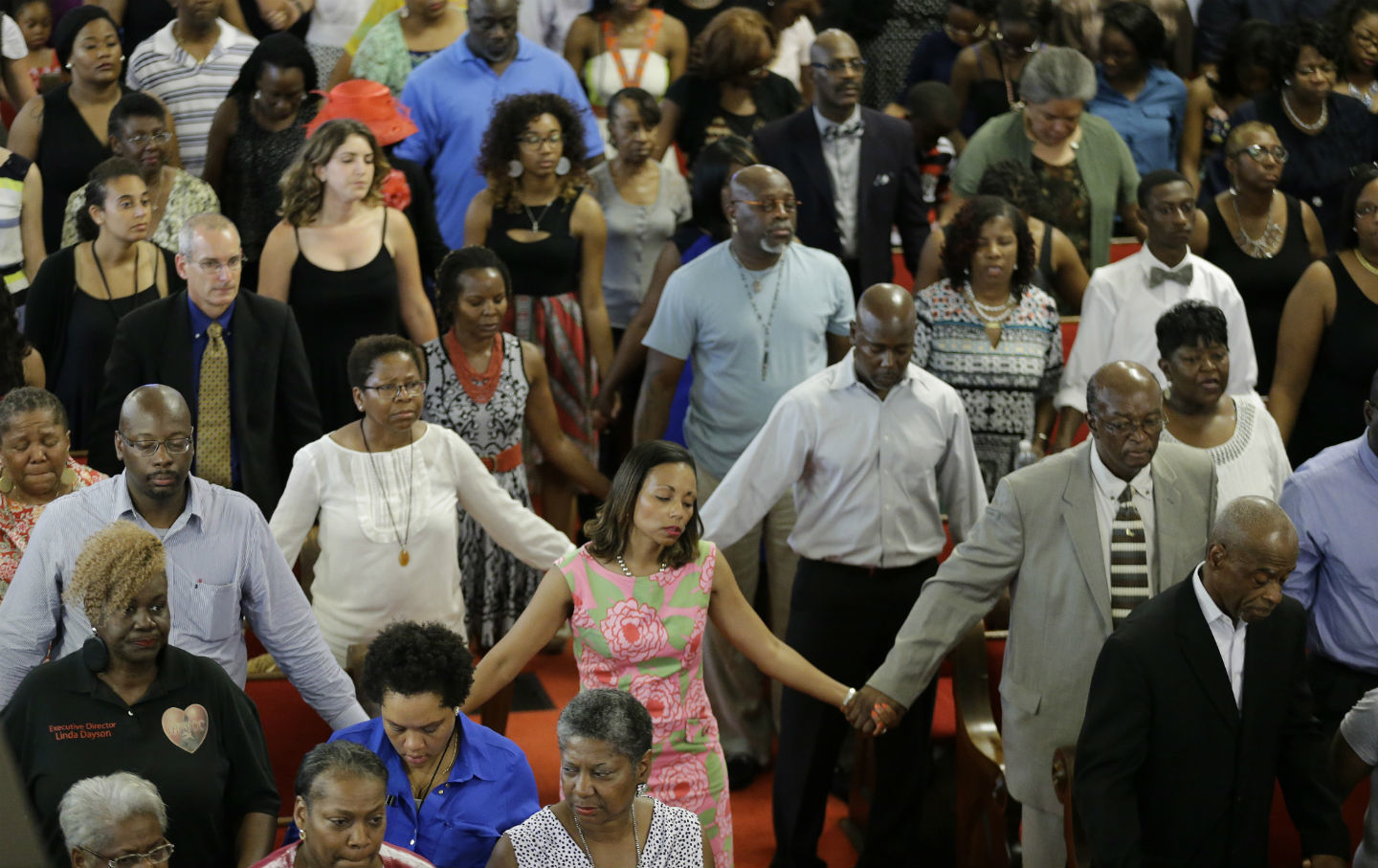 Regardless of one’s personal religious affiliations or leanings (or lack there of), any person with even a cursory knowledge of black culture understands why the location of Dylann Roof’s terrorist attack was particularly cruel—and why the spate of church fires that have followed are so troubling. No matter how distant you are from actual houses of worship and the beliefs that fill their pews, if you are African-American, the black church is likely tied in some way to who you are.

And yet as someone who was raised outside of the church, my own relationship to Christianity and its role in black life is a complicated one. Minus a brief stretch as a frequent guest at my best friend’s church while in third grade—visits that were the result of feeling left out from what my peers were doing on Sundays—I never had any real desire to be a churchgoer.

My thoughts on the church as a teenager and as a young adult were clear: Christianity was the religion of our enslaver. It was the justification for our bondage, and so long as we continue to pray to White Jesus, we will continue to be in chains. This spirit guided me to give great consideration to adopting Islam, which represented black liberation to me in ways that the love thy enemy teachings of Christianity did not. I went through the obligatory I’m more of a Malcolm than a Martin stage, through which many black radical thinkers pass, before exploring King as more than the sanitized, “I Have a Dream” ghost of himself we have come to know since his death.

As I got older, I came to have a more nuanced take on the church and its role in black freedom movements, from slavery to Ferguson. The number of mega-churches that have brought great wealth to their leaders via flocks that are too often filled with poor people still gives me great pause. But I have come to acknowledge the ways in which church has provided sanctuary (no pun intended) for our people and how the best of those institutions have brought needed resources into our communities: day care centers, elder care, financial planning, tutoring, food for the homeless.

I have come to realize black folks are my church, preaching the value of black life is my ministry and blackness is my sanctuary.

So when something happens that puts the black church in the blindingly white glare of national spotlight, a number of complicated emotions follow. I can’t help but feel protective and defensive at times, when media makers and their consumers treat black churches like museum instillations at best, zoos at worst, dissecting rituals and over simplifying historical context. From the televised funeral of Whitney Houston to the massive homegoing for State Senator Clementa Pinckney, something about allowing the world access to these sacred expressions of black grief just feels uncomfortable.

At the same time, the AME massacre also triggered my own anxiety and frustration around the black church—and then guilt for allowing myself to experience anxiety and frustration on the occasion of such a horrific loss of life. The Christian institution of forgiveness is one I have found to be particularly cruel to my people; it seems that we are compelled to forgive our transgressors almost immediately and in a way that does nothing to demand accountability and change.

Members of the immediate families of Dylann Roof’s victims publicly forgave him less than 36 hours after he’d killed nine people in a church that had welcomed him. This act has prompted much soul searching and debate about the toll and the power of black forgiveness. Roof had not apologized, after all, nor asked to be forgiven. As much as I desperately want to affirm and support those most directly impacted by this horrific crime, I was horrified by how the families’ words transformed the media narrative into one of healing for black Americans, as opposed to examining and identifying the Dylann Roof who lives in the hearts of far too many white Americans, even if their hatred may never compel them to go as far as Roof took his. At a moment when our entire race had cause to be angry, we were reminded that we are loving, forgiving people—a people that are required to be hyper-moral and superhuman in our tolerance of abuse.

Despite my personal hurt over the idea that anyone on this planet should forgive such a vile creature as Roof (there’s a significant percentage of the white American population that hasn’t forgiven President Obama for being elected, or for providing them access to healthcare, but we should forgive a murderer who wanted a race war?), I can’t help but wonder what it feels like to have the sort of peace that the black church seems to provide for so many others. Granted, for some the church inspires a lazy, inept sense that “Jesus paid it all,” that they don’t have to use their God-given gifts to do anything measurable to improve the world, and that our Earthly suffering at the hands of racism will be rewarded with milk and honey in the afterlife. But for others, such as the remarkable Reverend Pinckney, Christian theology has provided the foundation to inspire, to build, and to resist.

I have come to realize black folks are my church, preaching the value of black life is my ministry and blackness is my sanctuary. That requires me to open my arms and accept my people even when I can’t co-sign their values. Wanting nothing more than to affirm us during these difficult times and to keep us focused on our true enemies (white supremacy and structural racism), I am working to take a cue from my religious brothers and sisters, and to forgive our people for being so forgiving.

I will never forgive Dylann Roof and the country that made him. But I will release my anger at how other black folks find a way to keep themselves sane in the face of madness, and I will provide the unforgiving rage towards our enemies that others simply can’t.