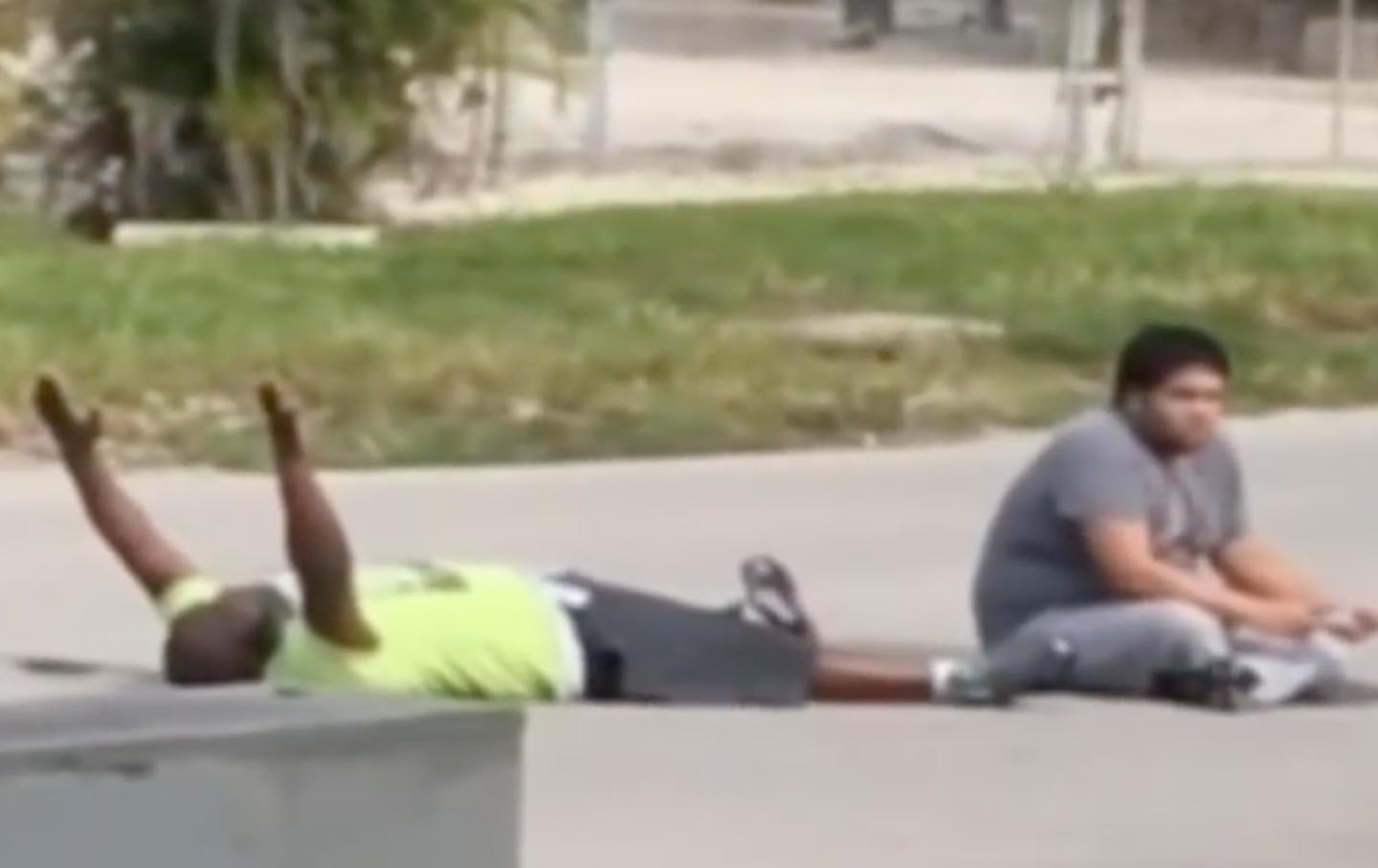 Screenshot of a cellphone video showing Charles Kinsey lying on the ground with his hands up, shortly before being shot by police in Florida.

“All he has is a toy truck. A toy truck. I am a behavior therapist at a group home.”

These were the words Charles Kinsey, an African-American man and behavioral therapist, spoke to police when they confronted him as he was trying to calm his patient, an autistic man named Rinaldo. Someone had called 911 to report a suicidal man with a gun. Facing police with guns drawn (an odd response to a potential suicide), Kinsey is lying down with his hands up, calmly but urgently imploring Rinaldo, who had escaped from the group home, to also lie on the ground. Like many people with autism, Rinaldo doesn’t, or can’t, follow directions well. Kinsey tries to keep tabs on him, while pleading with the police not to shoot. Then an officer shoots him, for no apparent reason. Rinaldo continues to play with his toy truck. There is nothing about this scene that implies anything other than what Kinsey said it was: He was a behavioral therapist trying to keep his client safe. He’s a hero, in other words.

Thanks to a quick-thinking bystander with a cell phone, we can now add this heartbreaking incident to the virtual epidemic of African-American men getting shot by the police, even as they make every effort to comply with cops’ demands. That Kinsey was shot as he was trying to help a man with autism doubles the pain.

Lately, as our autistic son J. grows up, I’ve been afraid of what might happen to him, especially as he has turned 16. While many people think of Rain Man, that’s not the kind of autism J. has—he’s still learning how to read and recently stopped wearing diapers. If a fire broke out, he wouldn’t know to leave the room. Therefore, when he’s not with my husband and me, he has an aide with him at all times. Sometimes, there’s an aide with us when we are all home—that’s the kind of help he needs.

Figuring forewarned is forearmed, since J. had his first unstoppable, crowd-gathering tantrum when he was 4 years old, I’ve been collecting morbid stories of trigger-happy police confronting adults with cognitive disabilities—often using force and violence first and asking questions later. They didn’t bother to understand disability, and the outcome is a nightmare, like this man with Down syndrome who refused to leave a movie theater and ended up killed by police. My husband and I have already had the experience of having the cops called on us in the parking lot of Whole Foods, of all places, and we just happened to be lucky enough to get a cop whose nephew is autistic. The officer couldn’t have been kinder; the paranoid lady who called the police drove away before I could confront her.

But one can hardly count on such empathy and experience. Many police departments are trying to educate their force on how to better deal with the cognitively disabled. But, clearly, there are still terrible gaps. And I’m just learning about the double bind facing black caregivers.

One day, J's caregiver, who is African American, showed up almost in tears.

Up until recently, J. was helped by a wonderful young man who would escort him to school on the subway. We were proud of J. for graduating from relying on New York City’s awkward and delay-prone para-transit service to taking the subway instead. One day, J’s caregiver, who is African American, showed up almost in tears. He said he’d had several incidents of being questioned by people who seemed to be on the verge of calling the police. They had occurred, he said, when he opened J’s bag to get out his subway pass or a toy for him for the ride and bystanders accused him of stealing. My husband and I dug out some old conference badges and lanyards and made him an official-looking ID to wear prominently, including a university business card that people could call if they had questions. This seemed to help, but in the back of my mind is always the what-if. This young man no longer works for us, but J.’s subsequent white aides haven’t needed us to make them IDs.

My heart has been sinking at each incident of black men and women dying at the hands of police, and this latest video has combined a national nightmare of an epidemic of unaccounted-for black deaths with my personal one as a parent of a disabled soon-to-be adult. I can hear in Charles Kinsey’s voice how worried he is about keeping Rinaldo safe. So why did the police see something so different? It isn’t just a policing problem. Many civilians are so frightened that they call 911 on impulse, starting an inadvertent cascade that ends with, say, a young man with Down syndrome, who enjoys a movie so much he doesn’t want to leave the theater, winding up dead. Or the lady that day in the Whole Foods parking lot—I honestly don’t know what she saw, but it was enough for her to call the police.

J.’s caregivers are there to intercede for him, to keep him safe. Without them, he can’t even tell people where he lives. J. has had some exemplary caregivers who’ve put his safety before their own. Just this morning, not unlike Rinaldo, he sat in the middle of a busy New York sidewalk and refused to move. He’s been known to sit in the middle of the street, in traffic. But now having to face the reality that not only might J. cause his own ruckus but an African-American caregiver can also be shot by police for no reason—thereby also endangering J.—is a little more than I can bear.