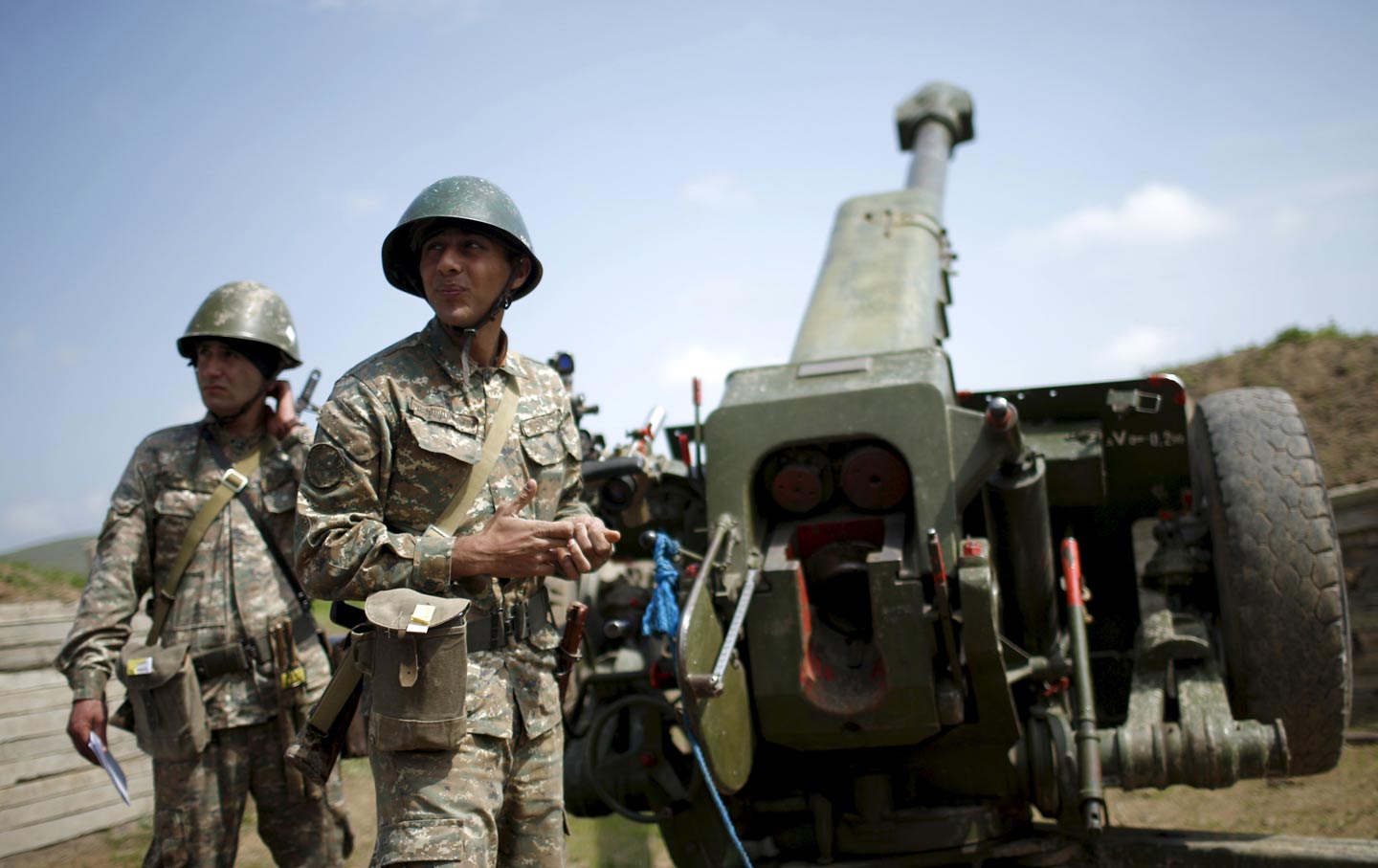 Ethnic Armenian soldiers stand next to a cannon near Martuni, Nagorno-Karabakh, on April 7. (Reuters / Staff)

Earlier this month, intense fighting erupted between Azerbaijan and the Armenians of the breakaway region of Nagorno-Karabakh, who are supported by Armenia. The conflict dates back to 1988 when the Armenians of Nagorno-Karabakh, then an autonomous region of Soviet Azerbaijan, used Mikhail Gorbachev’s glasnost to petition for the transfer of their region to the Soviet Armenian Republic. Large demonstrations were held in Stepanakert, the capital of Nagorno-Karabakh, and in Yerevan, the capital of Soviet Armenia. Clashes between Armenians and Azerbaijanis ensued, and after the dissolution of the USSR in 1991, the conflict exploded into a full-scale war. It ended with a Russian-brokered cease-fire in 1994.

Regional observers scrambled to make sense of the most recent violence in Nagorno-Karabakh. Most presented balanced and reasonable analyses of the clashes. However, there were also those who failed to take into account the historical and regional dynamics and instead relied on unfortunate Cold War-style anti-Russian rhetoric. They maintained that the recent hostilities in Nagorno-Karabakh were nothing less than a plot personally cooked up in the Kremlin by Russian President Vladimir Putin. Such analyses have recently appeared in the media and unfortunately obscure the reality of a very complex part of the world, making it harder for the genuinely curious American observer to understand what is going on.

Writing in The Wall Street Journal, analyst Svante Cornell asserted that Putin instigated the recently hostilities in Nagorno-Karabakh. Putin, he argued, sought to use the conflict “to try to undermine” the government of Azerbaijan. “Controlling that artery [Azerbaijan] is essential to Mr. Putin’s imperial project,” wrote Cornell, adding that the Russian leader “benefits from reminding both parties (and the West) of his ability to wreak further havoc in a region already marred by conflict, lest they toe his line.”

Similarly, in The Washington Post, Matthew Bryza, the former US ambassador to Azerbaijan, contended that Putin was “exploiting the situation” and “laying the foundation for future crises, while Washington watches.” He also implicitly alleged that Putin may have prodded a “local military commander” in Nagorno-Karabakh to “reignite the conflict in pursuit of narrow political interests.” This is an interesting theory from a man who, according to The Wall Street Journal, encouraged Georgian President Mikheil Saakashvili in the lead-up to the 2008 war in Georgia.

Notably, Saakashvili joined Cornell and Bryza in arguing that the recent hostilities in Nagorno-Karabakh “strongly resembles a trademark Russian provocation.” Not surprisingly, the beleaguered Saakashvili, who is wanted on criminal charges in Georgia and Russia, accused Putin of being personally responsible for the flare-up in Karabakh. “I always knew that Putin would use a lame duck status of the US administration for stirring up a major trouble,” he maintained. “Moscow had been preparing for the unfreezing of the Karabakh conflict for quite some time already.”

The allegation that Putin personally fomented unrest in Nagorno-Karabakh is far from reality.

However, despite all this rhetoric and intrigue, does Moscow really want to wreak havoc in Nagorno-Karabakh? The answer is simply no.

To the contrary, Russia has a strong interest in maintaining stability in the region, not undermining it. A conflict in Nagorno-Karabakh has the ability to throw the entire Caucasus into a state of chaos, creating serious problems for Russian state security. Furthermore, it could potentially bring Russia into a direct confrontation with Turkey, and, consequently, NATO.

The allegation that Putin personally fomented unrest in the distant mountain valleys of Nagorno-Karabakh is far from reality. This assertion not only fails to take into account real security concerns of the Russian state, but it also implies that no real internal politics exist in Russia at all. In fact, Putin does not make decisions alone. He consults with both liberals and hardliners within his administration. He may be a strong leader with authoritarian tendencies, but he is certainly no Stalin.

Those supporting the “Russian instigation” thesis also overlook the agency of the other countries in the region. The narrative that Russia provoked the violence to undermine US–Azerbaijani relations implies that Moscow influenced Yerevan, its closest partner in the Caucasus, to attack Azerbaijani positions. However, the facts indicate that it was the Azerbaijani side that launched the attack against the Armenians of Nagorno-Karabakh, not vice-versa. This is not surprising, given the fact that the fall in global energy prices has pummeled Azerbaijan’s petro-economy. Observers of the region assert that Azerbaijan’s autocratic president, Ilham Aliyev, was only too eager to turn the public’s attention away from the deteriorating domestic situation in the “Kuwait on the Caspian.”

Moreover, the Azerbaijani attack was vocally encouraged by Turkey, which unlike the US, EU, or Russia, never explicitly called for a cessation of hostilities. It is no secret that Ankara has sought closer ties with Baku in light of the broader Russo-Turkish confrontation over Syria and the Kurds. It has also used its lobbyists to convince Washington that Russia has been “weaponizing” Armenia against Turkey and NATO. These factors led to credible allegations of Turkey’s involvement in stirring up tension in the region. Indeed, Russian Prime Minister Dmitri Medvedev recently suggested that Ankara had “add[ed] fuel to the fire” in the conflict over Nagorno-Karabakh.

Getting Georgia’s War On

Russian Foreign Minister Sergei Lavrov and US Secretary of State John Kerry also apparently took the allegations of Turkish involvement seriously. After an extended phone conversation, both Kerry and Lavrov “condemned attempts by certain ‘external players’ to whip up the standoff around Karabakh.” This clearly contradicts Cornell’s assertion that “the Obama administration apparently believes the Armenian–Azeri conflict exists in a vacuum, isolated from regional tensions” and that it “doesn’t take the region seriously.” It also belies Bryza’s argument that there was a “lack of cooperation” between Washington and Moscow on the issue.

Both Cornell and Bryza further dismissed Iran’s potential role as a mediator and a constructive player in the region. In fact, Tehran has been understandably concerned about a possible spillover of the conflict, especially after the accidental firing of missiles by Azerbaijani forces into Iranian territory during the most recent hostilities. This concern has prompted Iranian officials to call for an immediate cease-fire, aligning Tehran with Moscow, Washington and Brussels.

Overall, these commentators condemned Washington for failing to see that “America’s interests are fundamentally opposed to Mr. Putin’s” and that Moscow is “part of the problem, not the solution.” However, by virtue of history and geography, the reality is that Russia is part of the solution. It was Russia that brokered the 1994 cease-fire on Nagorno-Karabakh, and it was Russia again that brokered the April 5 cease-fire, which ended the most recent clashes.

The reality is simply that Russian and American interests on global security do overlap, not only in Syria or Iran, but also in Nagorno-Karabakh. No amount of lobbying or “caviar diplomacy” from Ankara or Baku can change that.