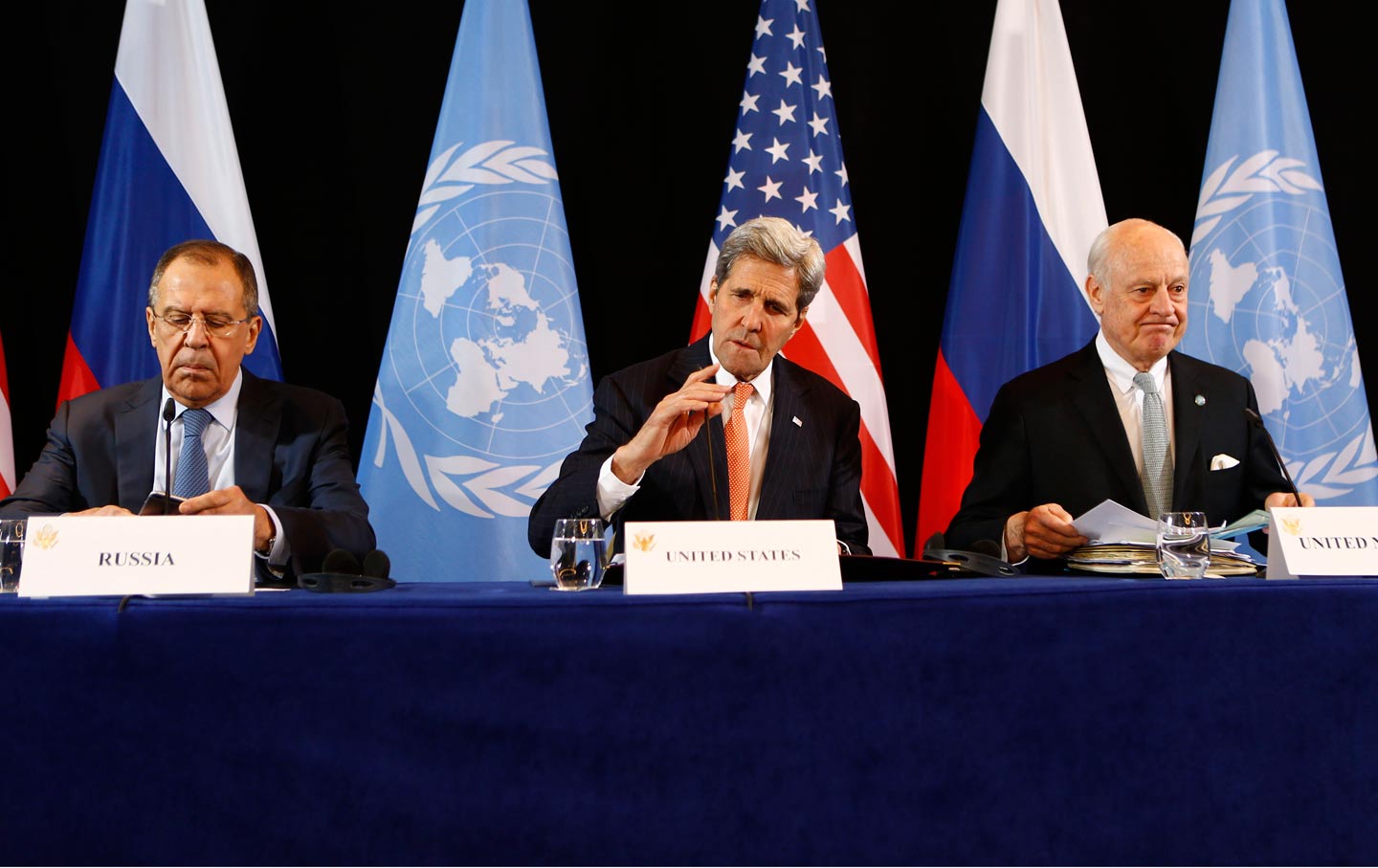 The new cold warriors who are the dominant voices within America’s military-media-think tank nexus seem to fear nothing more than the prospect of peace breaking out in Syria. Part of the reason for this is, of course, ideological, but it is hard not to draw the conclusion that they surmise, perhaps correctly, that if the next round of peace talks in Geneva, set for March 9, are met with success, then the prospects for the new cold war that they are so desperate to wage will be dealt a serious setback.

Hence their efforts to undermine the peace process that was cobbled together by UN Special Envoy for Syria Staffan de Mistura, US Secretary of State John Kerry, and Russian Foreign Minister Sergey Lavrov. In renewing their bids to demonize Russia, our new cold warriors hope to work a twofer: derail the next round of Syria peace talks while further undermining US-Russian relations. The sabotage takes several forms: through congressional hearings, through think tank events, and through a steady stream of anti-Russian stories in major mainstream publications.

Let’s examine some recent examples of each.

On March 1, Air Force Gen. Philip Breedlove, NATO’s supreme allied commander for Europe, appeared before the Senate Armed Services Committee and testified: “The US and NATO face two primary threats to our security interests: Russian aggression and growing instability on our southern flank.” “Russia,” according to Breedlove, “continues to foment security concerns in multiple locations” around Europe. After launching into a brief and largely inaccurate history of US-Russian relations in the post-Cold War era, Breedlove flatly stated that “Russia does not share common security objectives with the West.” This, perhaps, would come as news to Kerry and Lavrov, who have successfully worked together to solve several “common security objectives,” like getting rid of President Bashar al-Assad’s chemical weapons stockpiles and reaching a nuclear accord with Iran. As ever, the point of Breedlove’s show-testimony before the committee was to convince Congress and the administration that Russia—despite its oft-stated willingness to work with the United States on equal terms—remains the primary threat to European and American security.

At the US-Ukrainian Security Dialogue held in Washington in late February, the charge that Vladimir Putin’s Russia is a revanchist power was repeated again and again. One participant, the American Foreign Policy Council’s Stephen Blank, told the gathering that “Putin cannot and will not stop,” therefore “we have to stop Putin, because nothing else will.” Indeed, “there is no basis” for dialogue with Russia.

While sentiments like Blank’s are by now de rigueur in Washington, what made this particular conclave of worthies of note was that it featured the deputy speaker of Ukraine’s Parliament, Andriy Parubiy. According to the program bio, Parubiy served as the “commandant” of the Euromaidan (why did an ostensibly peaceful protest require a “commandant” anyway?) and, later, as secretary of Ukraine’s National Security and Defense Council. The bio provided to attendees might fairly be described as selective. Left unmentioned was Parubiy’s role in cofounding the neo-fascist Svoboda party, and his ties to extremist right-wing groups.

The tendency of the new cold warriors to praise anyone thought to be standing up to Russia, no matter how noxious, can be seen in their fulsome expressions of solidarity with Turkish President Recep Tayyip Erdogan. Although Erdogan jails journalists and opposition leaders at a rate that would make Putin blanch, he is held in high esteem within the military-media-think tank nexus. Indeed, Turkey’s by now well-known collusion with ISIS is studiously ignored in favor a narrative that paints Turkey as the latest target of Putin’s Russia.

Writing in Forbes recently, Adam Ereli, State Department official-turned-lobbyist for the Turkish Institute for Progress, warned that Russia is in the process of turning Armenia into a “new satellite state.” Russia’s “military presence in Armenia is but the latest indicator of a worrisome trend.” Ereli asks: “Why are we staying silent in the face of this thinly veiled aggression against Turkey?” After all, according to Ereli, Turkey has been “a critical ally in the global fight against ISIS.”

Ereli is hardly alone is identifying what may be the next front in the new cold war. In a letter to The Washington Post, Andrew Bowen, a Senior Fellow at the Center for the National Interest, decried the growing military ties between Russia and Armenia, which he claims threaten Turkey, “an indispensable US ally and partner in the fight against the Islamic State.”

Leave aside the wholly unsubstantiated—indeed, laughable—claims that Turkey is an “indispensable ally” in the fight against ISIS. The authors simply dismiss the fact that Russian troops are in Armenia at the invitation of the Armenian government, which has well-founded security concerns as they relate to Turkey. But no matter, what counts is that Turkey is “our ally,” and therefore Russia (and Armenia) must be deterred from acting in their own interests.

Does Russia have any legitimate interests? One might wonder after reading Evelyn Farkas’s “How to Defeat Putin” in Newsweek. Farkas, once one of the most hawkish officials in the Obama administration, is now one of the most sought after of the new cold warriors. According to Farkas, the United States needs to do more, more, more to stop Russia: Congress should “support beefing up security assistance to Ukraine, Georgia and Moldova”; the administration “should provide all three with anti-tank weapons”; “the Defense Department should no longer do any business with Russia”; and “we should establish a new foreign military assistance fund to help allies and partners throughout Europe and Afghanistan transition from Russian to U.S. military equipment.”

It’s hard not to conclude that the new cold warriors are determined to stop at nothing to undermine any US-Russia initiative that might lead to a lessening of tensions between the two countries.