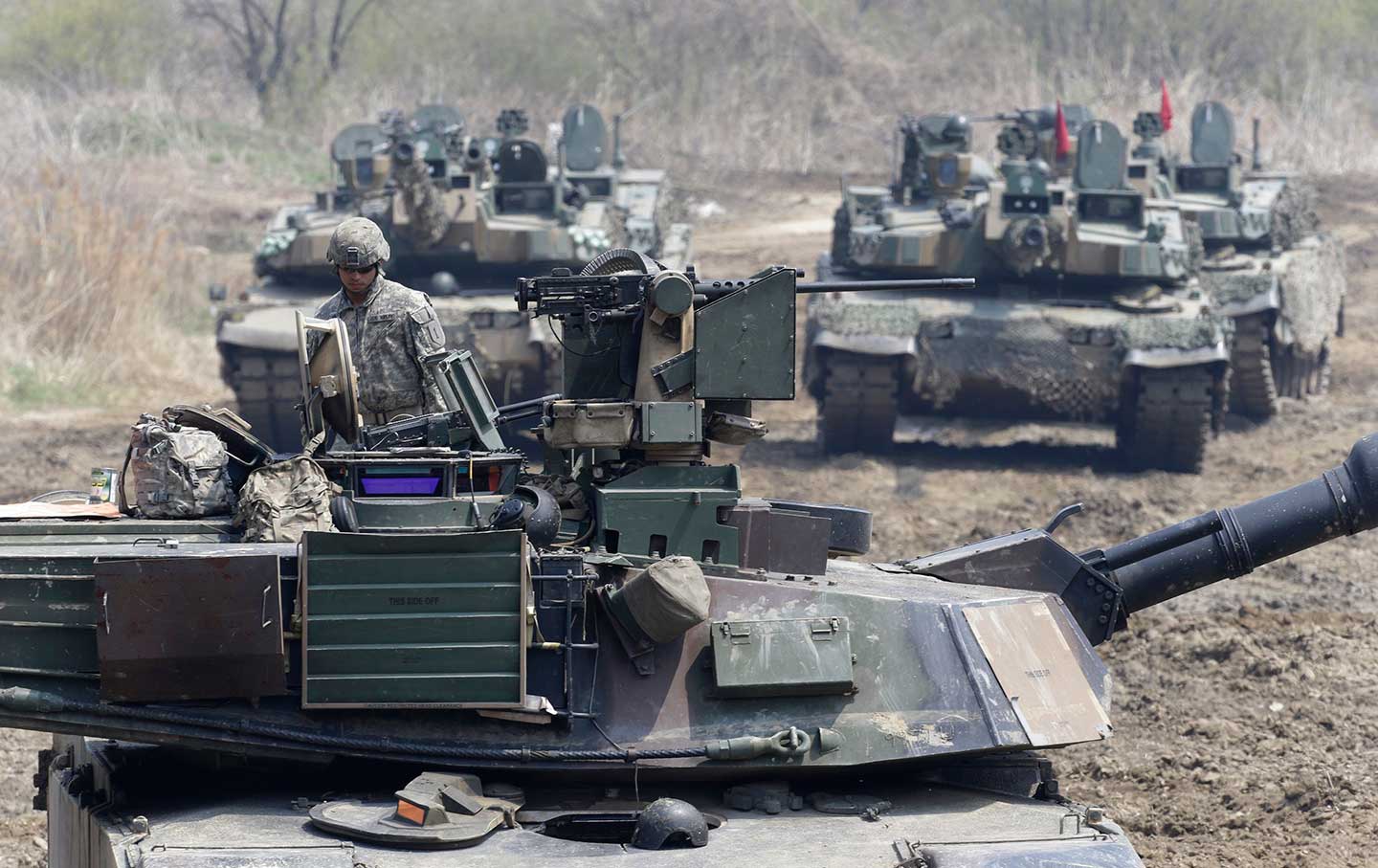 A US Army soldier works on an M1A2 tank during a joint military exercise between the United States and South Korea in Paju, South Korea. (AP Photo / Ahn Young-joon)

For the past year, Donald Trump and his chief advisers have responded to North Korea’s nuclear-weapons program by warning that “everything is on the table”—including war. That is not true. Missing from the table is the one option that could avoid catastrophe: the drawdown and eventual withdrawal of the US military encirclement of North Korea.

A majority of Americans, according to the polls, oppose the proliferation of US military interventions abroad. Yet, as Gallup reports, a majority also support a preemptive attack on North Korea if “the U.S. cannot achieve its goals by more peaceful means first.”

“Goals” in this case are assumed to be defensive, i.e., to prevent the North from launching a nuclear first strike as soon as it perfects a missile capable of reaching us.

Diplomacy With North Korea Has Worked Before, and Can Work Again

In South Korea, Women Are Leading the Resistance to US-Backed Militarization

It’s no surprise that Americans feel so threatened. Long before Donald Trump began trading schoolyard insults with North Korean leader Kim Jong-un, Trump’s predecessors—Clinton, Bush, and Obama—relentlessly demonized North Korea as a rogue state run by a dynasty of brutal tyrants who are out to destroy us. The presumed menace justifies our garrison of some 25,000 troops in South Korea, 65 years after the Korean War and a more than a quarter-century since the Cold War ended.

It also justifies the US refusal to take up Kim’s offer to negotiate. Our response has been: We don’t trust you, so first give up your nukes—and then we’ll talk. Kim’s response: I don’t trust you. Once I give up my nukes you’ll come after me like you came after Libya’s Moammar El-Gadhafi after he stopped building his.

A decade of harsh economic sanctions has not forced Kim to back down. So the lunatic logic of this standoff is pushing the public into accepting that we must destroy his missiles before he uses them on us.

We’re not talking here about some antiseptic surgical drone operation. As Secretary of Defense Jim Mattis wrote two Democratic congressmen last October, “The only way to ‘locate and destroy—with complete certainty—all components of North Korea’s nuclear weapons programs’ is through a ground invasion.”

Since China would clearly not accept an occupying US force across its border, such an effort by Trump to clean out Kim’s missiles could quickly topple the dominos into a Korean War Redux—this time with three nuclear-armed combatants.

Cooler heads may in the end prevail. But with both sides’ front-line military on hair trigger alert, the chance of war by accident or mistake has also escalated. A high-level North Korean defector told a congressional committee last November that their officers “are trained to press the button without any further instructions from the general command if something happens.”

Yet, as the clock ticks toward doomsday, Congress, the mainstream media, and therefore the public remain passive—stupefied by the cartoon image of the monstrous Kim, lusting to drop his bomb on us as soon as he can deliver it.

In the real world, the probability that Kim would initiate a nuclear strike on the United States is zero. The United States has some 1,400 nuclear warheads ready to fire, and another 2,600 that could be quickly deployed. Within hours, North Korea would be an uninhabitable wasteland, with Kim and his regime obliterated.

The North Koreans know this. So do serious observers of their behavior. As The New York Times reported last August, “scholars agree [Kim] has repeatedly proven himself rational and focused on his government’s survival. His country’s weapons programs are designed to deter a war, not start one.”

The reason that he threatens us here is that we threaten him there.

American presidents regularly vow to destroy Kim Jong-un’s country. In addition to permanent military bases in the South, they have surrounded him with a menacing armada of missiles, drones, planes, and warships—with regular violations of North Korean airspace at high altitudes. And he is the target of an annual, two-month long US–South Korean military exercise involving tens of thousands of troops practicing how to “decapitate” him.

After a meeting with Kim in Pyongyang on March 5, South Korean envoys reported that “the North Korean side clearly stated its willingness to denuclearize. It made it clear that it would have no reason to keep nuclear weapons if the military threat to the North was eliminated and its security guaranteed.”

So, what is the US military doing there in the first place? Citizens of our democracy looking for an answer soon find themselves lost in a fog of babble about America’s “vital interests.”

We claim that we are there to defend South Korea. But a nuclear attack on the South makes no sense. Seoul and Pyongyang are only a two-hour drive apart. Nuclear war anywhere in Korea would contaminate the whole peninsula.

What about a conventional invasion from the North? After the Korean War cease-fire in 1953, this was a legitimate worry. North Korea was larger and more industrialized than the mostly rural south. But today, South Korea has roughly 50 times the GNP of the north, is a manufacturing powerhouse, and it spends almost five times as much on its military. The uniformed North Korean army is numerically superior but lacks the armament and logistic technology of the South. Kim’s air force and navy are even more obsolete and no match for the advanced South Koreans. Retired US Army general James Marks, a former senior intelligence officer for Korea, says that after a surprise attack, the North Korean advantage would last about four days.

In his January State of the Union speech, Donald Trump based his case against North Korea on the way Kim’s “depraved” dictatorship mistreats its dissenters. Depraved it is, and mistreat them it does. But the claim that our armed encirclement of North Korea is in the cause of human rights is transparent nonsense. Among our own allies are the oppressors and torturers who run Saudi Arabia, Bahrain, Vietnam, Uzbekistan, Cambodia, and dozens of other dictatorships.

Democracy thrives on peace and prosperity. A war to destroy Kim’s regime would bring mass death, chaos, starvation, and it would turn tens of millions into refugees in their own land. Can anyone argue that North Koreans would be better off?

Finally, there is the claim that we must be willing to destroy North Korea in order to prevent nuclear proliferation. In his memoirs, Bill Clinton wrote, “I was determined to prevent North Korea from developing a nuclear arsenal, even at the risk of war.”

The claim reeks of hypocrisy. The US policy class looked the other way when both Israel and Pakistan built their nuclear capability. Today the Trump administration is discussing a deal that would allow the Saudis to enrich uranium (the essential ingredient for a bomb) in exchange for a nuclear-power-plant contract for Westinghouse. Of course, if stopping proliferation had been the US goal, it would have pursued the on-again, off-again negotiations of the past few decades in good faith, instead of matching North Korea’s paranoia with a failure to live up to our promises.

One clue as to why our troops are still garrisoned in South Korea lies in the panic that spread through the US foreign-policy establishment when South and North Korea recently began their own bilateral talks and agreed to march into the 2018 Olympics under one flag. Instead of seeing this as a positive step toward peace, American leaders—Democrats as well as Republicans—were alarmed that it was driving a “wedge” between the United States and South Korea. By putting pressure on Washington to negotiate, reported the Times, “the breach between South Korea and the United States could become a chasm.”

Thus, from Washington’s perspective, avoiding nuclear war is less a priority than maintaining its influence in that part of the world. Peace between North and South would make the average American safer and less burdened with the cost of deploying all those troops, bombers, missiles, drones, and warships. However, the average American general, military contractor, and globe-hopping pundit would be a smaller—and less well-paid—fish in the East Asian political pond.

Most Americans would not go to war to preserve their privileges.

So far the narrative of fear has stopped an honest political debate that would expose these “vital American interests” for what they are. But that could be changing. As the dogs of war bark louder, the realization that the mentally unstable Donald Trump’s itchy finger is poised above the red button should be making more Americans—across party lines—open to a common-sense challenge to the self-serving dishonesty driving us to the brink.

Certainly, given the growing skepticism of our military overreach, most Americans would support a deal that stops the North’s nuclear program, guarantees it against US-South Korean aggression, and buys time for both the North and South to work out Korea’s fate for themselves.

And one that finally gets us the hell out of there.