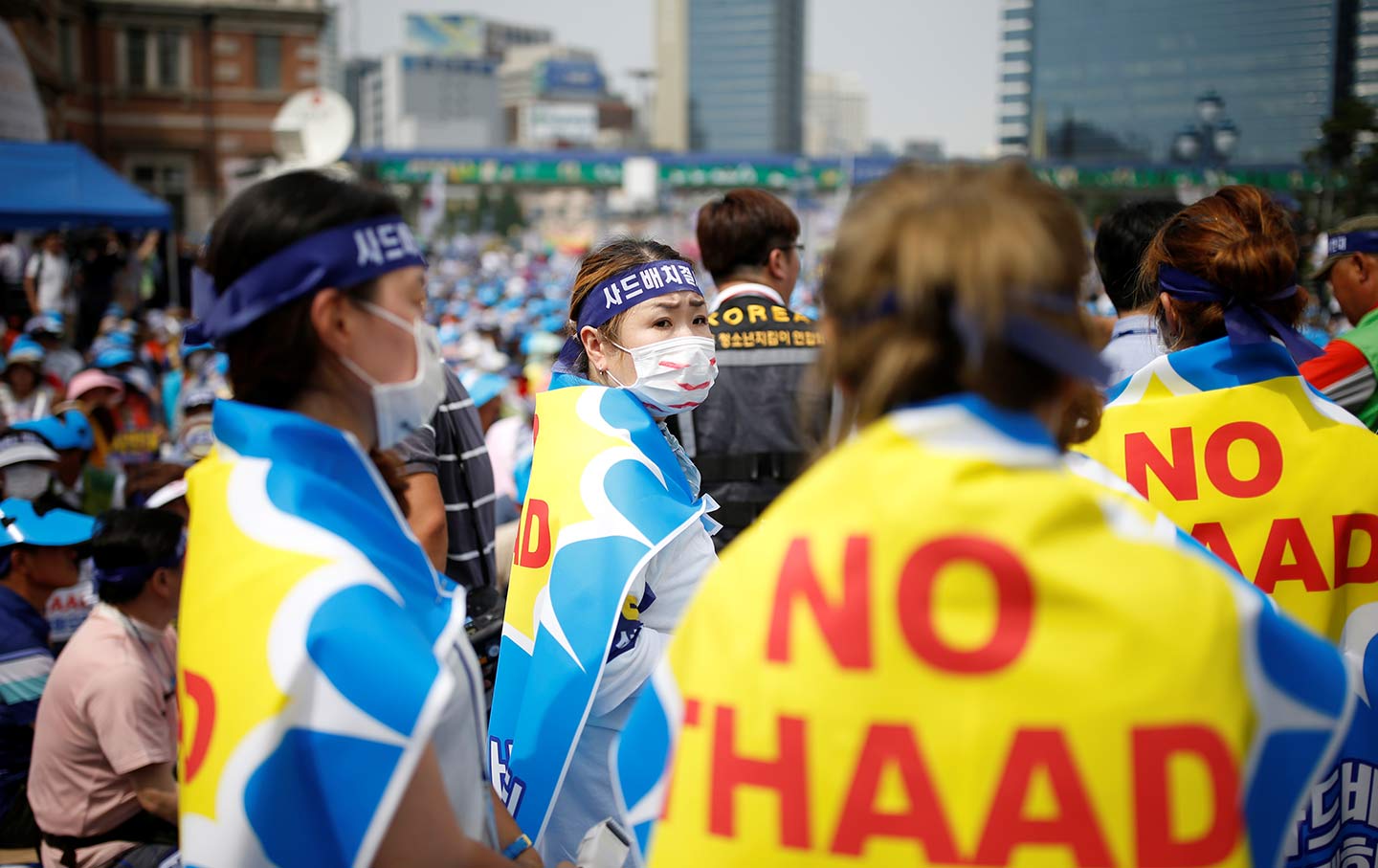 US Secretary of Defense James Mattis recently made the Trump administration’s first overseas trip. His destination: South Korea and Japan.

Coming on the heels of Donald Trump’s loud complaints about America’s “freeloading” allies, Mattis was there to assure South Korean and Japanese officials of America’s commitment to the trilateral security alliance between the three countries.

Yet Trump is hardly the only critic of Washington’s military alliances in the region. Civil-society organizations in the region have long complained about their governments’ deference to the United States, from challenging US military bases to warning against policies that could draw their countries into a superpower conflict between Washington and Beijing.

In South Korea, Mattis’s first stop, women demanding genuine human security are at the forefront of the resistance.

Foremost on the US agenda there is the THAAD missile-defense system, which South Korean President Park Geun-hye agreed to install last summer. According to Simone Chun, a Korean-American policy analyst whose family owns a 100-year-old orchard near Seongju, the missile-defense system will be adjacent to schools, hospitals, farms, and markets. “It will threaten the very economic and social lifeblood of the communities,” she said.

Now, however, Park is being impeached, and leading opposition candidate Moon Jae-in is calling for delaying the decision until the next administration, though not outright opposing THAAD. Meanwhile, Washington and Seoul officials are ratcheting up attention to North Korea’s nuclear threat as a self-evident justification for the missile-defense system.

But the nationwide protests that brought 2 million South Koreans onto the streets calling for Park’s impeachment is also demanding renegotiation of the missile-defense system, which is threatening South Korea’s relations with North Korea and China.

Proponents of THAAD say that it’s needed to intercept North Korean ballistic missiles. But others, such as MIT military analyst Theodore Postol, argue that the system’s ability to deter North Korean missiles is “insignificant.” Rather, Postol explains, THAAD “will definitely be looked upon by China as a significant military provocation by the U.S.” that could trigger military confrontations or war.

South Korean women aren’t buying the argument, either. In fact, they aren’t buying anything from the Lotte Corporation—the country’s largest department store—because the company is negotiating the transfer of its Skyhill Golf Course in Seongju as a deployment site for the THAAD system. Women residents from Seongju and Gimcheon, flanked by local Won Buddhists, have vowed to protest in front of Lotte stores and boycott their products and services until the company rescinds its agreement.

These women—including farmers and mothers with little to no experience in political activism—have been conducting daily candlelight vigils and protests in front of Lotte stores nationwide. According to Ahn-Kim Jeong-ae of South Korea’s Women Making Peace, the women of Seongju and Gimcheon also organized 10,000 women’s signatures and took out a full-page ad in Hankyoreh, a leading South Korean newspaper. Yoon Geum-soon, a melon farmer from Seongju, reports that “the sales of Lotte have decreased recently due to our daily protest.”

“The deployment of THAAD will increase tensions between South and North Korea,” said Ham Soo-yeon, a resident of Gimcheon who has been publishing newsletters about their resistance. In a phone interview, Ham said THAAD would “make the unification of Korea more difficult,” and that it would “place the Korean peninsula at the center of the US drive for dominant power over Northeast Asia.”

Indeed, many of these Korean women view their fight against THAAD as part of a larger struggle against the militarization of Korea driven by the United States. “Weapons can’t produce peace,” Ham says. “Rather, diplomacy and talk with North Korea has a far greater chance to bring about peace and stability in the Korean peninsula.”

The Korean women’s boycott really got going when civic groups in Beijing and other major cities in China joined in. “China’s stance over the THAAD deployment is clear,” explained the secretary of a civic group in Beijing. “If the Lotte Group does not care about our position and makes the final decision on the provision of the site, we have no choice but to fight.” The Lotte boycott is the latest target by China of South Korean exports, a broader effort which spans from banning cosmetics and dramas to denying K-pop stars visas.

Virulently opposed by surviving “comfort women” and their supporters, this betrayal has erupted in widespread citizen protests, including a self-immolation by a Buddhist monk and a campaign by activists to refuse to allow the removal of a bronze statue of a young girl in front of Japanese embassy in Seoul. South Korean activists also installed a second statue next to the Japanese consulate in Busan, the nation’s second-largest city.

Japanese officials are determined to remove these embarrassing reminders of Japan’s wartime sexual enslavement of “comfort women,” but civic groups including high-school and college students have been guarding the statues, even camping out on Korea’s cold winter nights. Meanwhile, the challenge to the agreement has led to a virtual exodus from Seoul by the Japanese diplomatic corps.

Another complicating factor to the US-South Korean alliance is the result of decades of organizing by Korean women and advocates for another set of “comfort women”—South Korean women working in gijichon, the camp towns frequented by US troops.

In a recent landmark ruling, a Korean court found that the South Korean government illegally detained women to force treatment for sexually transmitted diseases as a means to protect US soldiers. Seoul District Court Judge Jeon Ji-won called the Korean women “comfort women for the United States military,” drawing a distinct parallel with the “comfort women” forced into sexual slavery for Japanese soldiers.

Of the more than 120 women who filed the lawsuit, only 57 plaintiffs were offered an insulting amount of $4,240 each in compensation for the physical and psychological trauma they endured. They’ve vowed to appeal for a more just compensation and a decision that finds the government culpable in systematically creating the camp towns.

According to Ahn-Kim, this ruling will hopefully help level out US-South Korean relations, particularly the unequal Status of Forces Agreement between the two countries, to include “new articles about women and children’s rights in US camp towns.”

At a time when saber rattlers calling for “decapitation strikes” on Pyongyang are drowning out reasoned voices urging caution and diplomacy, Korean women have no choice than to take matters of security in their own hands. And without addressing their demands for justice and genuine security, the Trump administration’s touting of a trilateral alliance will simply be a ruse.

Like women who marched worldwide and in Washington following Trump’s inauguration, Korean women are staking their claims to human security on multiple fronts. No amount of posturing in service of an enhanced deterrence system will produce a robust alliance without the full and meaningful regard for their concerns for their families and communities.

As the Trump administration will soon discover, Korean women and their allies are on the forefront of redefining their country’s relationship with Washington and will make sure they’re heard—in the streets, in front of embassies, and through their pocketbooks.