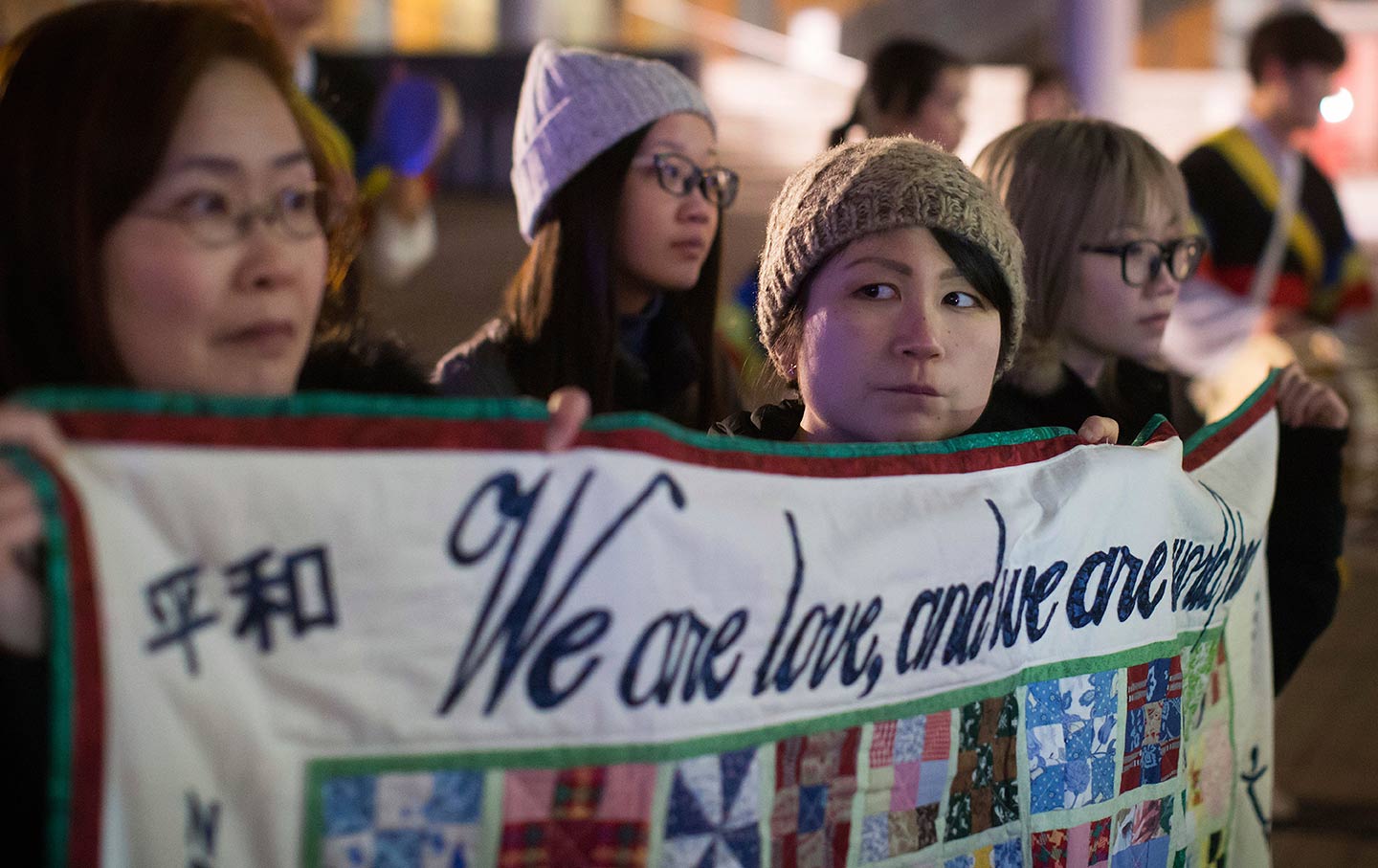 Women protest outside the site of the summit on North Korea in Vancouver on January 15, 2018. (Darryl Dyck/The Canadian Press via AP)

During a week when the two Koreas are finalizing plans for an Olympics truce, foreign ministers from a dozen countries that fought in the Korean War gather in Vancouver, Canada, for an unusual summit organized by the United States and Canada to “demonstrate international solidarity” with diplomatic efforts to stop North Korea’s nuclear and missile programs.

A principal goal of the summit, US officials say, is to win support for an aggressive program of maritime interdiction to prevent the Kim Jong-un government in North Korea from evading UN-imposed sanctions on oil, textiles, and other products. The ministerial summit was initiated in December by Secretary of State Rex Tillerson and Canadian Foreign Minister Chrystia Freeland. Defense Secretary Jim Mattis will also join the meeting.

But the summit could be upstaged by 16 women representing peace groups from the United States, Canada, and other countries involved in its planning. They have come to Vancouver to press for diplomatic and economic initiatives to peacefully resolve the Korea crisis and ultimately bring a formal end to the Korean War through a peace treaty. That devastating conflict, which lasted from 1950 to 1953, ended in an armistice agreement that stopped the fighting but left the country in a perpetual state of war.

The feminists’ presence has already generated attention. On Monday, the women’s delegation was received by Canada’s Freeland and later met with Tillerson’s aides from the State Department. That evening, they held a candlelight vigil near the meeting venue and called for more women to be included in the peace and negotiating process.

In South Korea, Women Are Leading the Resistance to US-Backed Militarization

South and North Korea Hold Talks; US War Hawks Are Alarmed at the Prospect of Peace

“We feel it’s really important to hold these foreign ministers to account,” Christine Ahn, the founder and international coordinator of Women Cross DMZ, the prime mover behind the “Vancouver Women’s Forum,” told The Nation. “The countries that sent soldiers, doctors, and nurses to Korea as part of the US-controlled UN Command also have a responsibility to finally end the Korean War.”

“A naval blockade is not diplomacy,” added Ewa Eriksson-Fortier, a Swedish member of Women Cross DMZ who spent 30 years with the International Red Cross, including two years in 2008 and 2009 as the Head of Country Delegation in Pyongyang. Many communities in North Korea, Eriksson-Fortier said, “still basically live without proper water and sanitation.” The new UN sanctions, particularly the restrictions on oil shipments, will impact those communities by limiting their ability to transport food, take people to hospitals, and use machinery needed to dig out river beds flooded with mud and silt caused by deforestation, she said.

“I see the oil embargo as extremely worrying,” she said in an interview from Vancouver. “Our task is to have a broad dialogue with different countries with a history in Korea.” She added, “I believe the Canadian government is sincere in their intent to promote a peaceful resolution.” Sweden, which with Switzerland runs the Neutral Nations Supervisory Commission created in 1953 to supervise the armistice, also sent a deputy foreign minister to Canada.

Washington and Ottawa organized the summit as a way to strengthen international support for the Trump administration’s “maximum pressure” campaign of sanctions and military might, which they believe will force North Korea to the negotiating table. The event came about after US discussions with Canadian Prime Minister Justin Trudeau, who has been actively seeking a way for Canada to help resolve the escalating confrontation between the United States and North Korea.

Last November, Trudeau suggested that one path could be working with Cuban President Raúl Castro, who has good relations with both Canada and North Korea. That possibility “was a topic of conversation” when he met with Castro in 2016, he told reporters. While Canada has voted in favor of the tough UN sanctions on North Korea, Trudeau has also obliquely criticized US policy by suggesting that Canada can take a different approach from the “unpredictable ways [and] military threats” employed by President Trump to pressure the North.

Trudeau’s potential role as peacemaker was given credence on Friday in a report on CBC News suggesting that Canada hopes to use the summit to mount a “robust international show of support for non-military options” that would also be “aimed at the White House.” Quoting sources “with direct knowledge” of the preparations for the meeting, CBC said the Canadian organizers believe that support could help Tillerson “build his case for diplomacy against hawkish elements within the Trump administration.”

But that’s not the view from the State Department. In a briefing for reporters, also on Friday, Tillerson’s director of policy planning, Brian Hook, said the foreign ministers would discuss ways to stop North Korea from evading sanctions, including the possibility of interdicting North Korean vessels on the high seas. The goal is to create “practical mechanisms to exert continued pressure on the Kim regime while demonstrating that diplomatic options remain open and viable,” he said.

Hook said the countries attending the ministerial were UN “sending states” that provided troops and humanitarian aid to the UN Command during the 1950–53 war. That command, which is still run by the Pentagon through United States Forces Korea, had a peak strength of 932,964 on July 27, 1953, the day the armistice was signed. According to USFK, the other countries that dispatched troops included Colombia, Belgium, the United Kingdom, South Africa, Canada, the Netherlands, Turkey, and Luxembourg.

Neither China nor Russia will attend the Vancouver meeting. In a statement last Friday, a Chinese foreign ministry official said the US-Canada ministerial is “meaningless” because it doesn’t include all the countries involved in the peace process and reflects “a Cold War mentality that can only create divisions in the international community.” The meeting has also drawn flack inside Canada from critics who believe Trudeau is simply following US dictates. “Most of the countries to be represented in Vancouver are those that sent troops in the Korean War to fight against North Korea,” two analysts wrote in the Toronto Star on January 3. “Might not the North Koreans see this meeting as a step in the formation of a Coalition of the Willing, similar to what preceded the invasion of Iraq in 2003?”

That’s exactly what the women’s groups hope to prevent. In addition to Women Cross DMZ, they are the Nobel Women’s Initiative, organized by six Nobel laureates; Canadian Voice of Women for Peace, a nonpartisan group that works closely with the UN; the United Church of Canada, a major Protestant denomination; and the Women’s International League for Peace and Freedom, which was established in 1915. Two women from South Korea representing the National Council of Churches in Korea and the People’s Solidarity for Participatory Democracy, a powerful citizens’ group, are also at the meeting.

In a joint statement released before the meeting, the women said their objective is to urge the foreign ministers to “prepare the table for a diplomatic peace process,” adding that the outcome of the official summit “must support the recent breakthroughs in inter-Korean rapprochement, not derail it.”

In a detailed proposal released on Monday, they recommended that the foreign ministers embrace dialogue “without preconditions” with “all relevant parties…to work towards achieving a nuclear-free Korean peninsula.” A key passage urged UN members to “abandon support for the strategy of maximum pressure, lift sanctions which have deleterious effects on the North Korean people, work toward the normalization of diplomatic relations, remove barriers to citizen-to-citizen engagement, and strengthen humanitarian cooperation.”

When the ministerial opens on Tuesday, the women will present Tillerson and Freeland with a gift of Korean quilt work “to set the table for peace talks,” Ahn said. She said she is hopeful, because Canada also had “a strong track record in helping to normalize relations between the US and Cuba” during the Obama administration.

In 2015, Women Cross DMZ led a historic visit to North and South Korea that crossed the border near the truce village on the demilitarized zone where the current bilateral talks are taking place.