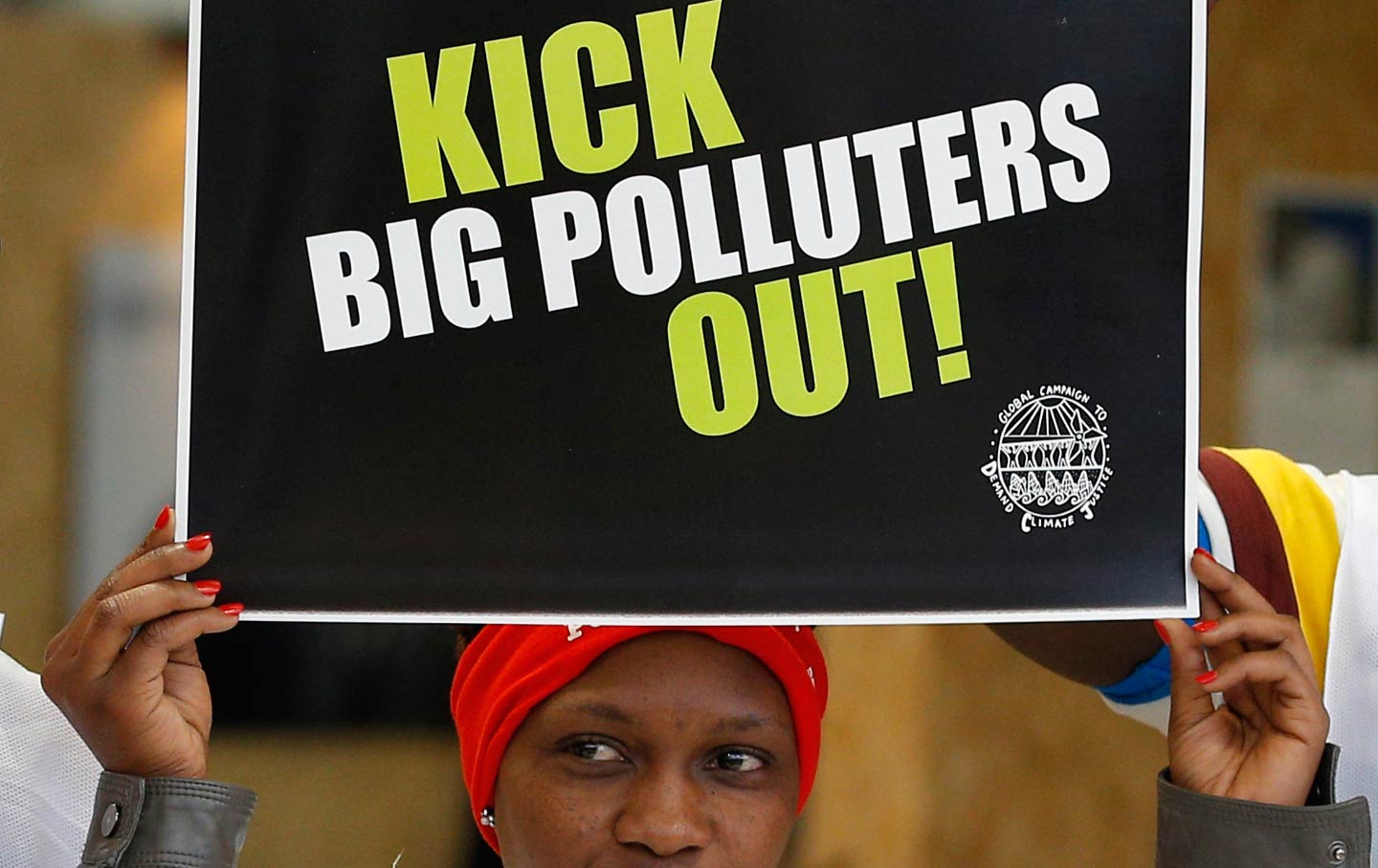 While the cardinal rule of politics is “Don’t bite the hand that feeds you,” the funders of the Paris Climate Summit want you to kiss the hand that chokes you.

The financial conflict of interest behind the Paris summit—with about 20 percent of the budget brought to you by corporations—is basically an open secret. Corporate Accountability International (CAI) has mapped out the connections between energy corporations sponsoring the event, policymakers, and international bodies to show exactly how well choreographed the conference has become: back-channel diplomatic horse trading, showcases for “business innovation,” a perfunctory nod to “civil society groups” and a tightly controlled smattering of protesters.

With every corridor festooned with corporate logos, the atmosphere of COP21 reflects the ethical questions left off the table. Arguably, corporations have every right to participate in the summit as “stakeholders”; you could even say that under the “polluters pay” principle, industry has a duty to help implement a transition to a clean energy system. But the idea of “being part of the solution” only goes so far for an industry that essentially embodies the entire problem through its very existence. Since policymakers have apparently proposed emissions reductions that utterly disregard scientific projections, environmentalists fear industry lobbyists could goad governments to further lower the bar.

BNP Paribas is known for investing in Canada’s controversial tar sands projects. Engie, which owns 30 coal-fired power plants worldwide, still devotes the vast majority of its production capacity to nuclear and fossil fuels, and a token 5 percent to renewables, according to an analysis by French environmental groups.

transnational corporations have increasingly “captured” states by exerting unmistakable influence over investment, production, and employment at all levels of economic activity, compelling states to adjust their policies in pro-corporate ways.

The French government is actually a part-owner of EDF and Engie’s operations, embodying the intimate codependency between business-as-usual and the political status quo.

It’s no surprise these high-level talks are embedded with corporations’ “interference tactics.” But the difference with Paris is that such gatherings are billed as a public policymaking forum, yet by bending to industry influence, governments risk undermining the democratic process. As Asad Rehman of Friends of the Earth explained at a COP21 panel on greenwashing, the negotiations are fraught with “Powerful vested interests, whose business it is to either slow down change or to ensure that the policies put forward continue to benefit the small elite and the corporations rather than benefit the majority of people.”

The summit is colored not just by multinational profit motives but ideological agendas. The negotiators have converged over a neoliberal “green capitalist” consensus. Rather than seeking to move beyond the economic model that propelled the earth into climate crisis, CAI argues, the policy debate revolves around incumbent energy producers as gatekeepers for “innovation,” promising a “win-win” for business and environment: “market-based solutions” that fit the mechanics of capitalist production, “such as carbon prices and trading…techno-fixes, such as carbon sequestration, hydraulic fracturing…and nuclear energy—none of which have reduced overall emissions globally.”

Big brands are amplifying the free-market rhetoric. The side events convened by corporate sponsors evangelize for “innovations” promising to incrementally reduce emissions through cleaner tailpipes, while preserving the basic system of unsustainable production. (The Sustainable Innovation Forum features Coca-Cola and BWM as chief sponsors.)

Despite the corporate influence-peddling, scientific realities still peek out from behind the curtain at Paris: Current levels of energy consumption are unsustainable, and society can either adapt our economic systems or nature must readjust them for us; the only question is when, and how violently, change will occur.

Since climate-stressed communities can’t wait for capitalism to enlighten itself, CAI proposes a radical restructuring of the conference by barring fossil fuel-based sponsorship and eliminating “lobbying efforts by fossil fuel and emissions-intensive corporations” from the COP process. Going forward, blocking polluters’ money would demonstrate the principle of tying the project of global decarbonization to a movement for global redistribution of political power.

Toward that end, the COP21 planners could begin by establishing a comprehensive policy to at least confront the philosophical contradiction behind negotiating and engaging with dirty-energy sectors, and seek to insulate the policy-making process from corporate interests. Overall, CAI Communications Director Jesse Bragg says via e-mail, polluters’ influence in policy making remains toxic, “both at the both at the international level…and, most importantly, at the national level via direct lobbying, bribery and other tactics. Sponsorship is a very public and particularly egregious symptom of the larger systemic problem.”

If the ruling elite can’t imagine climate talks without the influence of polluters’ money, how can we imagine a world without dirty fuels? Yet we’re starting to: the massive climate marches leading up to Paris, new strategies of institutional fossil-fuel disinvestment, emerging theories of climate justice in environmental law, community-based renewable-energy generation—all exemplify grassroots alternatives to COP21’s stage-managed dialogue.

Paris’s political impasse translates into the world’s call to action: behind the closed-door deal-making, ecologically speaking, what really gets compromised in these talks are principles. Yes, polluters should pay, but they shouldn’t govern. The fossil-fuel industry’s stake is tied to its environmental debt to society; they can’t demand influence when they owe restitution.