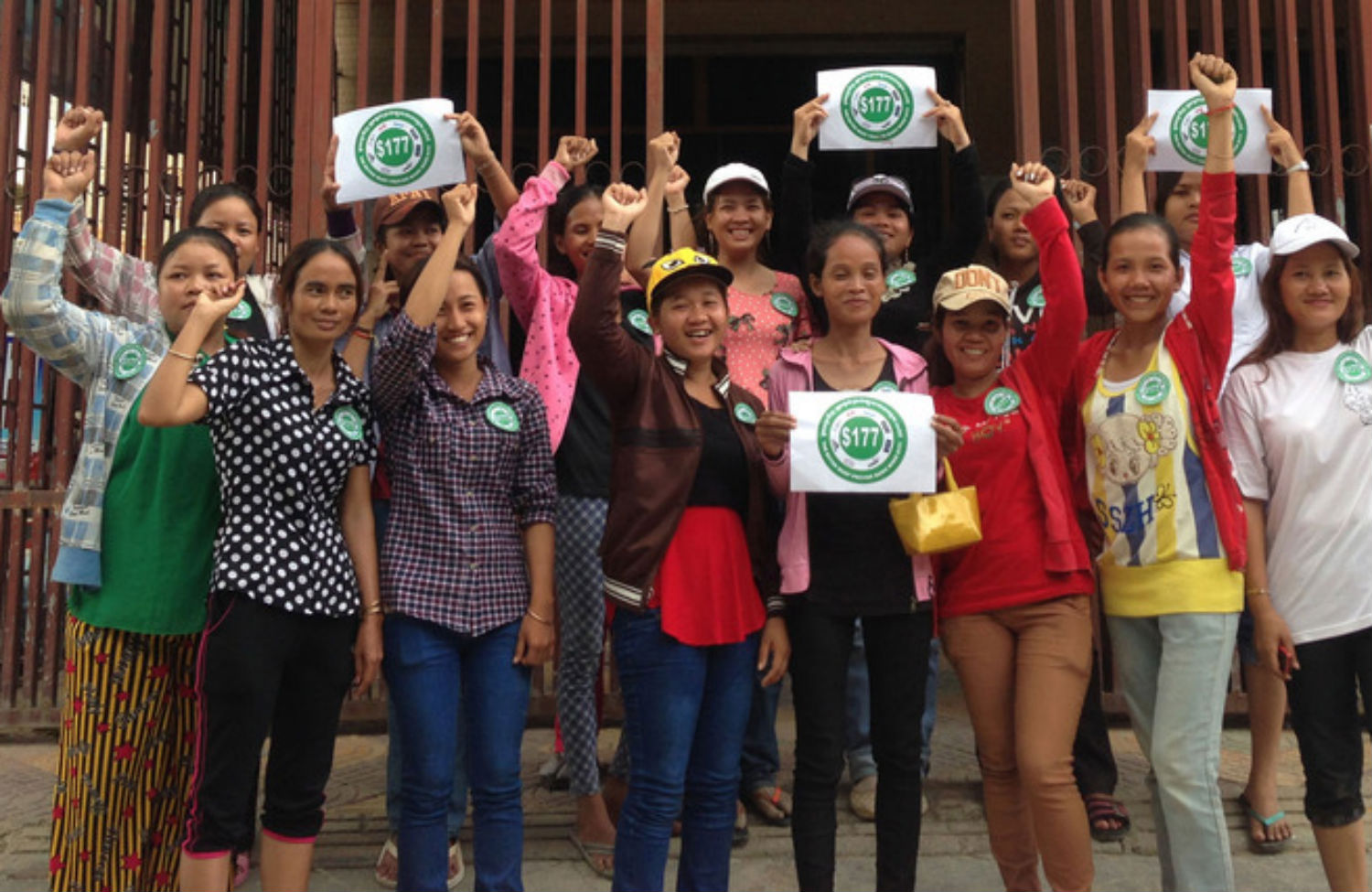 While the fashion world swoons at models displaying this season’s couture on the runway, factory girls in Phnom Penh are trying not to faint at their sewing machines. On Wednesday, these two worlds—the fast fashion of Fifth Avenue storefronts and the churning sweatshops of Southeast Asia—are colliding with an international day of solidarity with Cambodian workers.

A coalition of human rights and labor groups has planned direct actions in at least fifteen cities across the United States and Europe. Targeting the outlets of multinational fashion brands like H&M, Adidas and Zara, protesters demand justice for Cambodian garment workers. These efforts follow a string of labor uprisings across Asia, fueled by a string of industrial disasters as well as government crackdowns on protests and strikes.

At a forum in Manhattan last week sponsored by the International Labor Rights Forum and other activist organizations, Jeff Hermanson, director of Global Strategies for the SEIU’s Workers United campaign, described the protests in the US as following the lead of the factory workers and grassroots campaigners overseas: “They’re not just victims,” he said. “They are a potential power, they are a real power.… And I hope that we here in America are part of this movement.”

Their chief demand is a pay raise, to the princely sum of $177 per month. That would add pennies to the price of a T-shirt—a rounding error for a $5 billion-a-year export industry. Nonetheless, it would mark a step toward the living-wage benchmark of more than double that amount—a figure activists calculated based on the cost of living for a family of four on a standard 48-hour workweek, backed by collective bargaining and union rights.

The “living” part is literal: hunger is an acute concern for the mostly female workforce; chronic malnourishment has reportedly factored into mass fainting spells at factories affecting hundreds of workers in recent years.

One worker interviewed for an investigative report on the phenomenon by Labour Behind the Label (LBL) and local groups recalled passing out in late 2012 at a factory that supplies Costco. She had been pregnant at the time, and then faced a terrible trade-off:

[F]or now I cannot work because the long hours in harsh conditions and small amounts of food will put the health of my child at risk. I have to choose between having my child and working in the factory.

While factory work is often vaunted as a source of economic advancement for women in the global south, these humanitarian issues show that much of this work is hardly empowering for the rural young women seeking to support their families with factory jobs. For this migrant and marginal labor force, the basic cost of housing and food is crushing—the result of a dilapidated social infrastructure. Lili, a worker interviewed in another LBL report, lamented:

Even if we eat all together in a small room and I collect the money from all others, we still can only spend a very small amount each because everybody always thinks ‘How are we going to be able to send money home to our families?’

Meanwhile, factory owners also complain of poor infrastructure and price pressures, and cite overhead costs as a reason to keep wages desperately low. Ultimately, it is the multinationals dominating Cambodia’s garment sector that must change the profit structure and break the cycle of exploitation.

But workers who have dared challenge the global manufacturing system have faced ruthless brutality. Last winter, mass protests demanding a hike in the monthly floor wage to $160 (the government insisted on no more than $100) swept across Phnom Penh and led to the killing of several workers in clashes with security forces.

Following international condemnation, twenty-three labor activists were finally released from detention in late May. In a statement by a coalition of human rights groups, Moeun Tola of the Community Legal Education Center celebrated the release, but stressed that for the embattled labor movement as a whole, “there has still been no justice for the dead and injured” and “no attempts have been made to find or bring charges against those responsible.”

The unrest in Cambodia—with a record 147 strikes last year—folds into a wave of recent industrial actions, from strikes in Bangladesh after the Rana Plaza disaster, to riotous protests by workers at foreign-invested factories in Vietnam, to recent protests in Indonesia for fair contracts, and solidarity campaigns coordinated by global labor unions.

Reuters quoted Said Iqbal, of the Confederation of Indonesian Trade Unions, describing a growing sense of transnational unity, noting that he has been in dialogue with activists in Malaysia, Vietnam, Cambodia and Laos: “Our motto is clear—say no to cheap wages. We’re spreading that principle in Southeast Asian countries.”

Global brands have grudgingly responded with promises of higher wages—eventually. H&M, a top label in Cambodia, just launched a “partnership” with the International Labour Organization (ILO) focused on “training and skills development” to gradually improve working conditions. H&M also reiterates in a statement today, “Our vision is that factory workers should earn a fair living wage and this wage should be negotiated between the legitimate labour parties.” While the company endorses a multiyear “holistic” process it calls a “roadmap to fair living wages,” today it has offered only to “work together with other brands in dialogue with” the international labor group IndustriALL, with plans “to approach the Cambodian government and employers’ organization GMAC to clarify the brands position in the upcoming wage negotiations.” The statement does not discuss directly working with workers themselves on the main immediate demand of today’s campaign: a $177 monthly wage. (In a follow-up correspondence, the company described in further detail its relationship with international bodies and industry stakeholders, and maintained its role is “not to set the level of wages.” See below for full statement.)

But Hermanson tells The Nation via e-mail, all the company really needs to do is just heed the workers’ demands:

If they were to simply negotiate “fair living wages” with the unions that represent the workers…mandate their suppliers to pay the wages negotiated, agree to pay the costs of the increase and to keep their work in those supplier factories, the problem of low wages could be solved for literally tens of thousands of workers. And this would set a precedent that would affect the whole Cambodian apparel production industry…. H&M’s partnership with the ILO is a transparent attempt to appear to be doing something, while H&M continues to deny responsibility for the poverty of the workers that produce their clothing.

So Cambodian workers will return to the streets to set their own global precedent. At last week’s forum, Kalpona Akter, head of the Bangladesh Center for Worker Solidarity, urged US workers and consumers to unite with the global movement.

“The workers from Bangladesh, the workers from Cambodia, Haiti, [wherever]… we need these jobs. But it is time for us to say that we want these jobs with dignity…. And people in the house, you need to figure out how you are going to bring the dignity for us,” she said.

There was a collective acknowledgment in the room that Americans face their own economic struggles here, with Walmart workers mired in poverty, and fast food workers campaigning for a union. Still, Akter noted this is precisely why workers need to link arms across the supply chain: “Everyone has hope, and everyone has a role to play…. Please, from the place you are, act. Just act.”

UPDATE: H&M representative Ida Ståhlnacke has responded to The Nation’s query on the company’s position on the $177 wage demand with the following statement, which elaborates on its collaboration with intergovernmental and labor bodies:

Our role as a buyer is not to set the level of wages. Our approach is that wages should be negotiated between the parties on the labour market. We contribute to this process in Cambodia with for example training in negotiation and conflict management together with ILO, the Swedish trade union IF Metall and the Swedish Government.

In Cambodia, we have introduced a unique project in collaboration with ILO, SIDA and one of Sweden’s largest unions, IF Metall. We work together to strengthen the dialogue between the parties in the Cambodian textile industry. The aim is to strengthen the structures for industrial relations in the country and increase collective bargaining, and to improve the dialogue between employers and employees which allow them to find agreements through negotiation instead of confrontation. The project will support the stakeholders in the importance of collaboration/co-operation, negotiation techniques and conflict resolution. The goal is to create opportunities for dialogue and strengthen the relation between employees and employers.