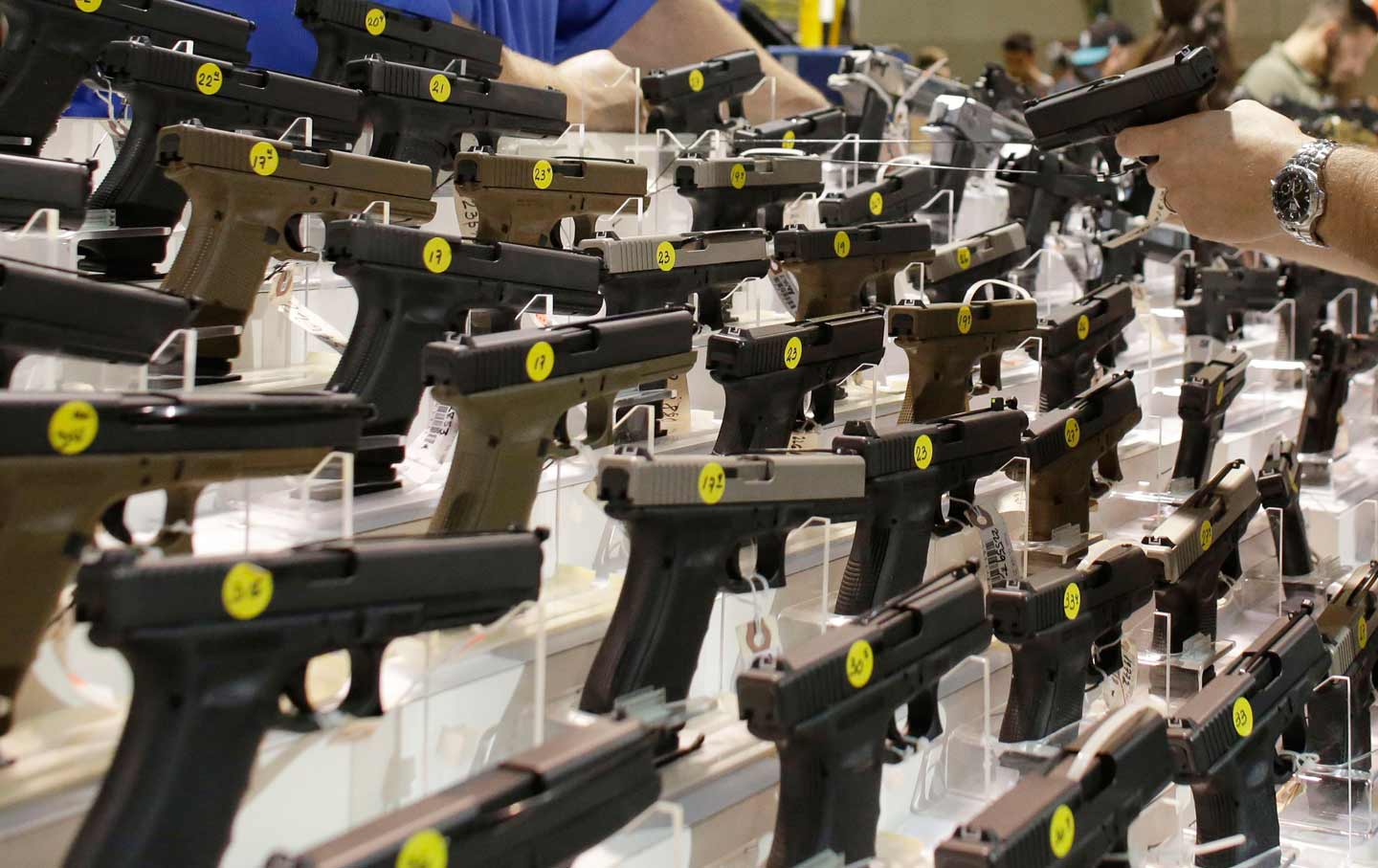 A customer looks at a pistol at a vendor's display at a gun show held by Florida Gun Shows in Miami. (Lynne Sladky / AP)

The woman taking tickets asked whether I was carrying a gun. She called me “Sir” in a tone calibrated to let me know I was welcome here at the Florida Gun Show. I assured her I was not carrying a weapon. She took my ticket and motioned for me to go around the man in front of me, who did have a gun. The man had to show that his gun was unloaded and that he was not carrying loose ammunition. The ticket taker took the man’s gun and secured it with a plastic tie strap, checking it twice before handing it back.

We Need a Radical Movement for Gun Control

At the gun show I attended in Orlando last month, there was strict gun control.

Inside, atop nearly 600 tables, an array of handguns, shotguns, assault rifles, and ammunition formed a tidy metallic sea. A gawky white man with his hair tucked behind his ears walked me along his table. He held the handguns cupped in his hands like they were baby birds. He offered up a dozen like this, in succession, until I finally accepted one. It was a Remington RM380, a lethal little thing designed to fit in a purse. A two-hour class was starting in 20 minutes, for a concealed-carry permit that would allow me to walk around with the semiautomatic pistol secreted away in my pocket.

The day before, Donald Trump had accepted the endorsement of the National Rifle Association, a redundancy given the array of “Trump for President” and “Trump Army” T-shirts on sale at the Orlando gun show. A vendor of “Ladies If Your Man Doesn’t Know How to Fire a Gun You Have a Girlfriend” T-shirts chatted with an Orlando police officer about George Zimmerman’s attempt earlier in the week to sell the gun he had used to kill Trayvon Martin. The officer thought the handgun itself, a Kel-Tec PF-9, was a “piece of shit,” but that Zimmerman was “a good guy” for pledging the proceeds to “stop Hillary.” For the same price as the girlfriend T-shirt ($12) the adjoining table offered a roll of toilet paper with Hillary Clinton’s face printed on it.

Across town, meanwhile, the president of an Orlando-based evangelical Christian law office, Liberty Counsel, had recently announced that she would be carrying her Glock .45 into Target bathrooms. Liberty Counsel’s Anita Staver is best known for representing Kim Davis when the Kentucky county clerk refused to issue marriage licenses to gay and lesbian couples. Now she says she needs her Glock to protect herself from “perverts” who would take advantage of Target’s newly announced trans-friendly bathroom policies.

At the time, I found Orlando’s miasma of gun mania, gender anxiety, and homophobia bizarre and unpleasant, but more amusing than alarming. Three weeks later, a few miles from the fairgrounds hosting the gun show, off-duty security guard Omar Mateen used a Sig Sauer MCX .223-caliber semiautomatic rifle to shoot more than 100 people at the gay nightclub Pulse, killing 49. For days, I watched the photos of the dead scroll across my screen, a heart-crushing pageant of young, beautiful, brown-skinned queens and queers.

What influence did Islamist groups have on Mateen? For FBI Director James Comey, this seems to be the central question, now as before. In 2013, the FBI investigated Mateen for bragging to his coworkers that he had relatives in Al Qaeda, while also claiming to be a member of Hezbollah. FBI agents questioned Mateen again in 2014 after a friend called the FBI to report that Mateen encouraged him to watch Al Qaeda propaganda videos. To understand how Mateen was “radicalized” to the point of such spectacular violence, the FBI is now looking for points of contact it may have missed between Mateen and ISIS or other Islamic groups.

But what of Mateen’s interactions with other, more proximate drivers of violence? Given the ease with which Mateen secured his weapon and his choice of a gay bar as his target, an investigation into his influences must examine Florida’s increasingly extreme gun culture and delve into the state’s special history as the birthplace of our nation’s politicized, Bible-based homophobia.

It was in Dade County that singer turned Florida citrus spokesperson Anita Bryant in 1977 organized what she deemed a “Christian crusade” to repeal the county’s newly passed antidiscrimination ordinance. Fundamentalist Christian radio and television programs soon discovered their audiences were mesmerized by Bryant’s descriptions of gays and lesbians as pedophiles chasing after your children, and Save Our Children’s astonishing success became the blueprint for using virulent homophobia to build a politicized fundamentalist Christian base. Save Our Children begat Jerry Falwell’s Moral Majority, which in turn begat the litter of anti-gay, anti-feminist organizations that now make up the religious right.

That same year, 1977, a group of pro-gun ideologues at the NRA’s annual meeting engineered a 4 am coup that marked the end of the NRA as a marksmanship and gun-safety organization. Once in power, the activists methodically used the organization to subvert the meaning of the Second Amendment, ignoring its plain language about a well-relegated militia and inventing an individual right to own and carry guns. The pro-gun movement—called “a fraud on the American public” by Chief Justice Warren Burger and culminating in Justice Antonin Scalia’s D.C. v. Heller opinion—has been particularly strong in Florida. In 2012, Florida’s agriculture commissioner issued a press release boasting of approving its millionth concealed-carry license; it was the first state in the nation to pass that mark.

That the anti-LGBTQ and pro-gun strands of Mateen’s immediate surroundings converged with Anita Staver’s bluster about packing her Glock .45 to stave off trans people in Target bathrooms is not mere coincidence. Liberty Counsel, founded in 1989 and closely aligned with Jerry Falwell’s Liberty University, is the litigation firm responsible for drafting North Carolina’s HB2. At a moment when the rest of the nation is undergoing a sea change in attitudes about LGBTQ people, Anita’s husband (and Liberty Counsel co-founder), Mat Staver, continues to denounce “the homosexual lifestyle” as “immoral, unnatural, and self-destructive,” while the firm’s staff attorneys are busy rebranding its antigay work as “religious liberty” litigation. That litigation, while certainly creative, has not been successful. Losing on every front, Anita Staver must resort to the brute force of a Glock .45 to make her stand.

After the mass shooting at Pulse, there are stirrings among the LGBTQ community to make gun control part of the gay agenda. Earlier this week, over 80 LGBTQ organizations signed a petition calling for universal background checks and banning sales to “suspected terrorists and those convicted of violent hate crime.”

There are good reasons to take on gun violence. With gay marriage checked off the list, there is room for a big new fight where love can win over fear. Taking down the NRA, responsible for Mateen’s easy access to an assault rifle, can provide some measure of justice for those injured and killed. And the wan forces pushing for “common-sense gun control” can certainly use a more radical group of advocates with the patience and experience to build the kind of popular support needed to reverse Justice Scalia’s mistaken D.C. v. Heller opinion and return the Second Amendment to its original meaning.

For this level of change to happen, however, the tussle over guns will have to move beyond background checks and banning sales to people on the no-fly list. Meaningful change will require gun-control advocates to become part of a larger antiviolence movement led by those most impacted by violence. That is, by working-class trans and LGBQ people of color like those who were dancing at Pulse the Sunday night before last. Without knowing the details, we can guess that such a liberating movement would likely work to end not only mass shootings but also interpersonal violence and state violence at the hands of police and prisons.

It’s a tall order, but 10 minutes at a Florida gun show makes clear that our country’s current gun culture will not be changed without a culture war—all the more reason to jump in. As Justice Scalia himself conceded in his sneering 2003 dissent in Lawrence v. Texas, the LGBTQ community has proven itself time and again to be very good at winning culture wars.