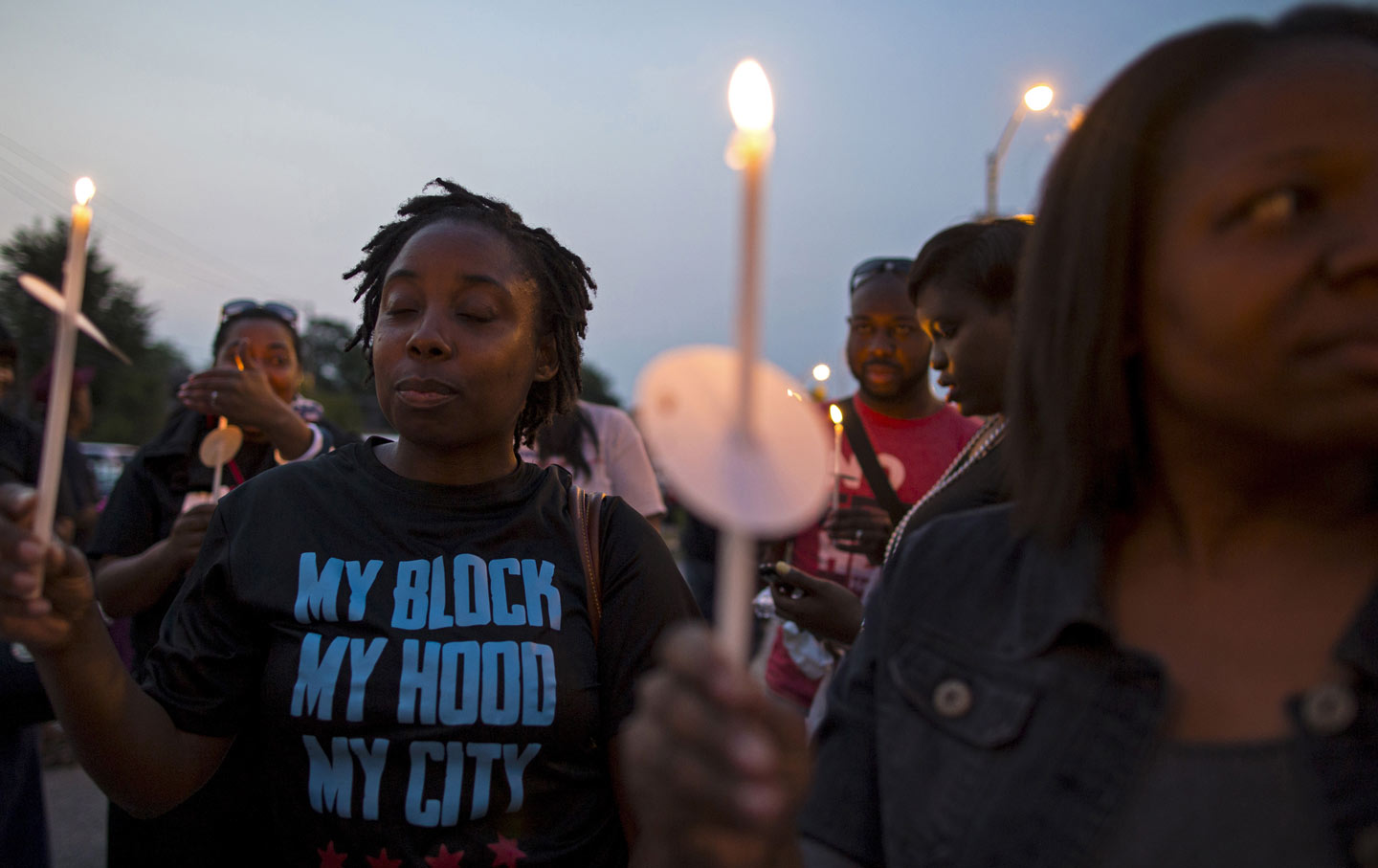 People gather for a candlelight vigil against gun violence in Chicago on July 3, 2015. (Reuters / Jim Young)

Over Memorial Day weekend, at least 69 people were shot in Chicago. If past trends continue, most of them are people of color. Mass shootings in places like Newtown, Aurora, and San Bernardino grab national attention, but gun violence is a regular part of life in many communities of color. Among boys and men ages 15-34, for example, African Americans are over 20 times more likely than whites to be victims of gun homicide.

This Will Be a Historic (and Terrifying) Election for Gun Control

While more attention to gun violence in communities of color is sorely needed, too often existing coverage focuses on “black-on-black” dysfunction rather than structural causes and potential solutions.

A recent New York Times story provides an example. “A Drumbeat of Multiple Shootings, but America is Not Listening” chronicled the victims of 358 shootings with four or more deaths or injuries. Many stemmed from arguments over a petty grievance, an insult, or another sign of disrespect. The story emphasized the “black-on-black” nature of gun violence, and suggested black activists expend too much energy protesting police violence against African Americans and too little energy focused on “routine gun violence.” While the story’s narrative describing the death of an innocent bystander put a compelling face on statistics, the story did not offer meaningful solutions.

The problem of gun violence stems not just from petty grievances among impulsive youth of color, however, but from larger structural issues such as credibility of law enforcement, easy access to guns, and a lack of job skills and opportunities. Communities of color care about both gun violence and police violence. Further, communities of color are not simply sources of problems—they also provide important solutions.

Last month, the Joint Center for Political and Economic Studies, the Urban Institute, and the Joyce Foundation released Engaging Communities in Reducing Gun Violence: A Road Map for Safer Communities. Our research debunked the notion that African Americans are less attentive to the problem of gun violence than police violence.

In compiling this report, we brought together and listened to residents of communities hard-hit by gun violence—faith leaders, formerly incarcerated individuals, law enforcement, elected officials, social service providers, community activists, and others. Most of the participants were black or Latino—people like Fathers & Families of San Joaquin Executive Director Sammy Nunez; Petersburg, Virginia, Police Chief John Dixon; and Wanda Montgomery of Children’s Hospital of Wisconsin. Others were members of our steering committee and have devoted their careers to building safer communities—people like Gary, Indiana, Mayor Karen Freeman-Wilson; Rev. Michael McBride of PICO National Network; and Kayla Hicks of the Educational Fund to Stop Gun Violence. We then tested the ideas that emerged against a nationwide survey of 600 African Americans and 600 Latinos conducted by Benenson Strategy Group (BSG) and Ron Lester and Associates.

Similarly, the communities with which we met thought improving police-community relationships was a key factor in reducing gun violence. Distrust that stems from arbitrary stops and discriminatory enforcement makes residents less willing to work with police, and makes communities less safe.

Solutions put forth by community members were supported by the survey research. Over 90 percent of African Americans and Latinos supported strengthening police accountability through civilian review boards, body-worn cameras, and racial bias assessment and training of police (including new recruits). Over 76 percent of both groups support prioritizing enforcement on higher-level gun violence offenders rather than lower-level “broken windows” offenders.

For example, community residents recommended limiting access to guns by the small group of people at high risk of engaging in violence—sometimes no more than 0.25 to 1 percent of a city’s population. Rather than looking to greater penalties for handgun possession that could increase mass incarceration, community members emphasized universal background checks, mandatory reporting for lost and stolen firearms, and increased oversight of licensed firearm dealers. Each proposal was supported by over 86 percent of African Americans and Latinos in the survey research. These restrictions are seen as reducing rather than fueling mass incarceration.  About three-quarters of both African Americans and Latinos agreed that “if we keep guns out of the wrong hands, we can also help decrease the number of people who are in prison.”

Community members also recognized that areas hardest hit by gun violence often have suffered disinvestment of resources by companies and the public sector, and that many of those at high risk to commit or to be victimized by gun violence face a lack of job skills and opportunities, addiction, and other challenges. Thus, our report recommends increased investment in social services targeted at high-risk populations and their families, such as drug treatment, mental health services, job training and placement, and conflict interrupters who mediate disputes and discourage retaliation. Over 92 percent of African Americans and over 88 percent of Latinos support solutions like job training, life skills support, and mental health counseling available to young people and people just released from jail or prison.

In addition to these solutions, we heard a deep desire for community members to engage with law enforcement, elected officials, and other community leaders in developing and implementing solutions to gun violence.

While we should be honest and give much-needed attention to gun violence in communities of color, we need to consider all the facts. Focusing largely on shallow black-on-black spats makes gun violence a “black and brown” problem, masks deeper structural causes of gun violence, and obscures the responsibility of all Americans to help solve the problem. Our new research suggests that communities that are most affected by gun violence understand the challenges, know the solutions that will have the greatest impact, and are eager to be at the table to drive those solutions forward.