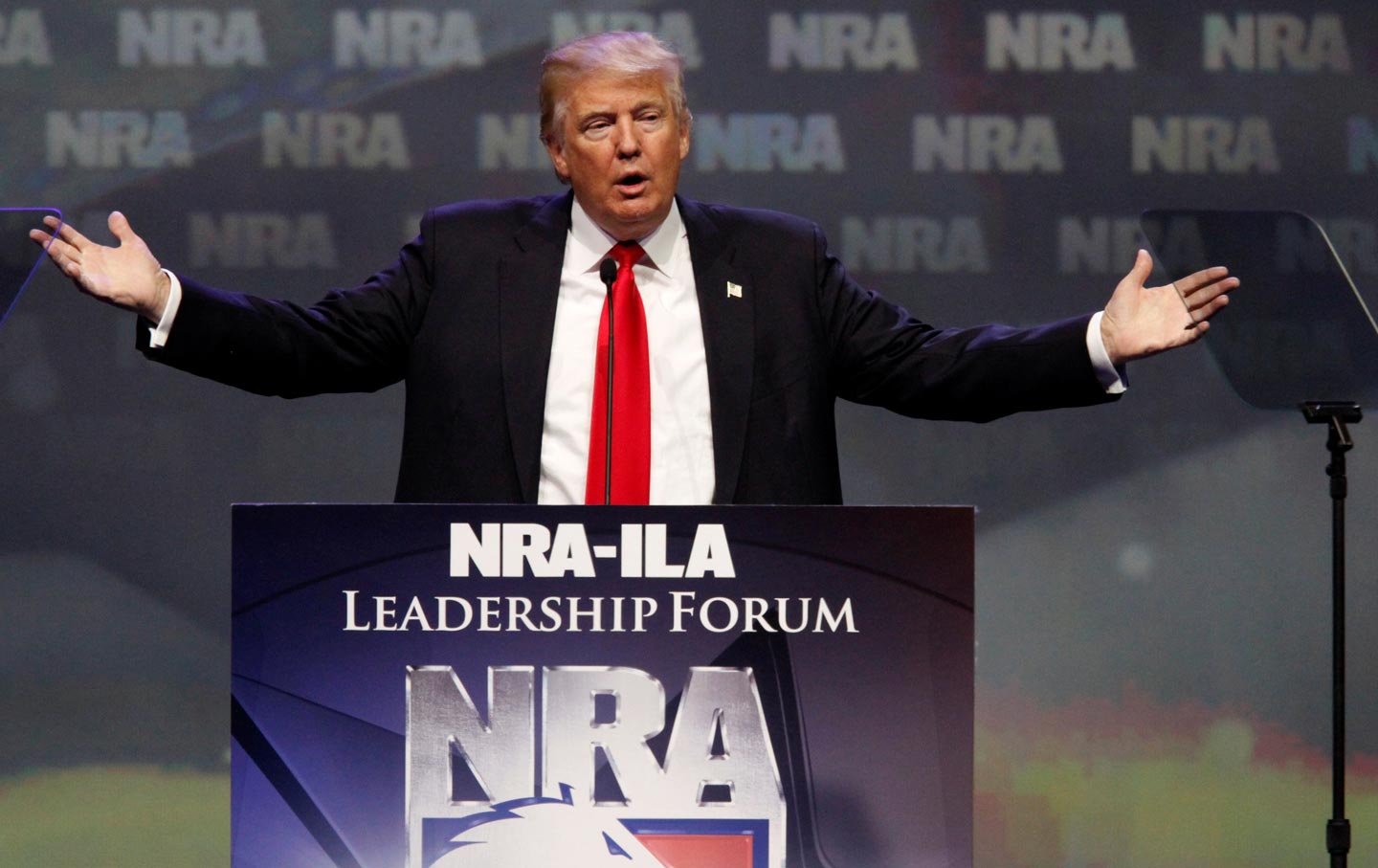 When he ran for reelection in 2012, Barack Obama never talked about gun control. That’s almost hard to remember now, after Newtown transformed Obama and he spent massive political capital trying to make Congress act on comprehensive reform. While Obama has since pledged not to even campaign for Democrats who don’t support gun-control legislation, his speech at the Democratic convention in Charlotte four years ago never alluded to gun violence.

This was no small feat, considering mass acts of gun violence shook the country throughout the summer of 2012. After the Aurora, Colorado, theater shooting in July killed 12 people and wounded scores more, Obama said only that he wanted “to arrive at a consensus around violence reduction—not just of gun violence, but violence at every level, on every step, looking at everything we can do to reduce violence.” He proposed no new gun reforms.

Less than a month later, when six people were shot and killed at a Sikh temple in Wisconsin, Obama again declined to make gun safety a campaign issue. Reporters asked White House Press Secretary Jay Carney if the president wanted new laws, and Carney essentially said no. “We need to take common-sense measures that protect Second Amendment rights and make it harder for those who should not have weapons under existing law from obtaining weapons,” he replied.

The upcoming presidential election will be dramatically different, as dueling speeches from Donald Trump and Hillary Clinton this past weekend demonstrated. Like few other elections before it, 2016 will feature gun control as a huge and explosive issue.

Clinton spoke at the Trayvon Martin Foundation on Saturday after meeting with 60 mothers who lost children to gun violence. “At long last, we must do something about the gun violence that stalks communities and terrorizes families. And this is on the minds of every one of us here tonight, as we remember all of the young people who have been lost,” Clinton said. “This problem isn’t going away.”

For months, Hillary Clinton has made guns a central theme of her campaign. One of every four television ads she ran in New Hampshire were about gun control. She has regularly met with victims of gun violence, particularly mothers, and unveiled a comprehensive gun-control plan last October. This is the toughest stance of any Democratic candidate since at least Bill Clinton in 1996, who invited James and Sarah Brady to speak in prime time at the DNC, though Hillary’s proposed reforms are much more far-reaching.

Beyond the policy merits, her team clearly saw this as a political winner against Senator Bernie Sanders, who has a checkered voting record on gun rights and hasn’t yet bothered to release a gun-control plan, despite promising to do so. And it may continue to be a winner against Trump—wide majorities of voters favor universal background checks for gun owners. Gun control is a big issue for several critical demographic groups, including independent women voters: 51 percent want stronger gun laws, while only 6 percent want laws to be weakened, according to polling from the pro-reform Americans for Responsible Solutions. Sixty percent of women voters overall want stronger laws.

Trump’s approach to wooing these voters during his speech to the National Rifle Association’s annual meeting in Louisville, Kentucky, on Friday was comparatively ham-handed. “Whether it’s a young single mother in Florida or a grandmother in Ohio, Hillary wants them to be defenseless. Wants to take away any chance they have of survival,” he said. “In trying to overturn the Second Amendment, Hillary Clinton is telling everyone, and every woman living in a dangerous community, that she doesn’t have the right to defend herself.”

Trump then immediately declared, “My poll numbers with women are starting to go up, I never thought of it. This should really lift them up.”

Don’t be fooled by the clumsiness of that attempt. During his speech to the NRA Trump also proved adept at exploiting the deep undercurrents of xenophobia, fear, and aggression that have long underpinned the modern right-wing gun movement. Several times, my hair stood up.

Trump brazenly proclaimed that Obama released hordes of violent criminals onto the streets. “President Obama pushed for changes to sentencing law that released thousands of drug-trafficking felons and gang members who prey on civilians,” he said. “This is Hillary Clinton’s agenda too, to release the violent criminals from jail. She wants them all released. She wants people released that you wouldn’t want to walk on the street with, you wouldn’t want to look at.”

The only protection, Trump declared, is more guns. And Trump quickly went from the light coding of “gang members” to more explicit racial agitating, asserting that the country was under siege by violent undocumented immigrants. “Many of these are also—I’m sure you’re not going to be surprised to hear this—illegal immigrants,” he said. “This was tragic. A 65-year-old veteran, a woman who was a great woman, raped, sodomized and killed by an illegal immigrant. Wasn’t supposed to be here. We’re going to straighten it out.”

This sort of fear-mongering and rank exploitation of racial anxieties isn’t new for Trump, but it’s terrifying to see him fuse it with the NRA movement to loosen gun laws and put weapons in the hands of every American who wants one. Wayne LaPierre hasn’t been afraid to do the exact same thing, but, like no presidential candidate in recent memory, Trump is ready to take the show mainstream. (The toughest line of Mitt Romney’s speech to the same NRA conference in 2012 was probably, “It is time to elect a president who will defend the rights President Obama ignores or minimizes.”)

And Trump is clearly unconcerned with the ramifications of his rhetoric. In a riff that somehow didn’t receive widespread condemnation, he mused about disarming Clinton’s Secret Service protection. “We’ll also call [for] them [to] let their bodyguards immediately disarm. They should immediately disarm,” Trump said. “ And let’s see how good they do.”

When these two candidates meet in the general-election arena, the NRA and the burgeoning gun-reform movement will have the two strongest respective champions imaginable. It’s hard to say at this early vantage point how the debate will play out, and to whose benefit, though based on polling around the issue, I’d bet Clinton.

But the gun control debate is also vulnerable to rapid (and unpredictable) shifts in public opinion because of high-profile shootings. If something like Aurora were to happen again, you can be assured neither Trump nor Clinton would ignore its relation to gun control. Current events might make the gun issue even more volatile than it already is.

And if we needed a reminder, as Trump was speaking about disarming the Secret Service in Louisville, a man with a gun charged the White House gate and was shot several times by agents.