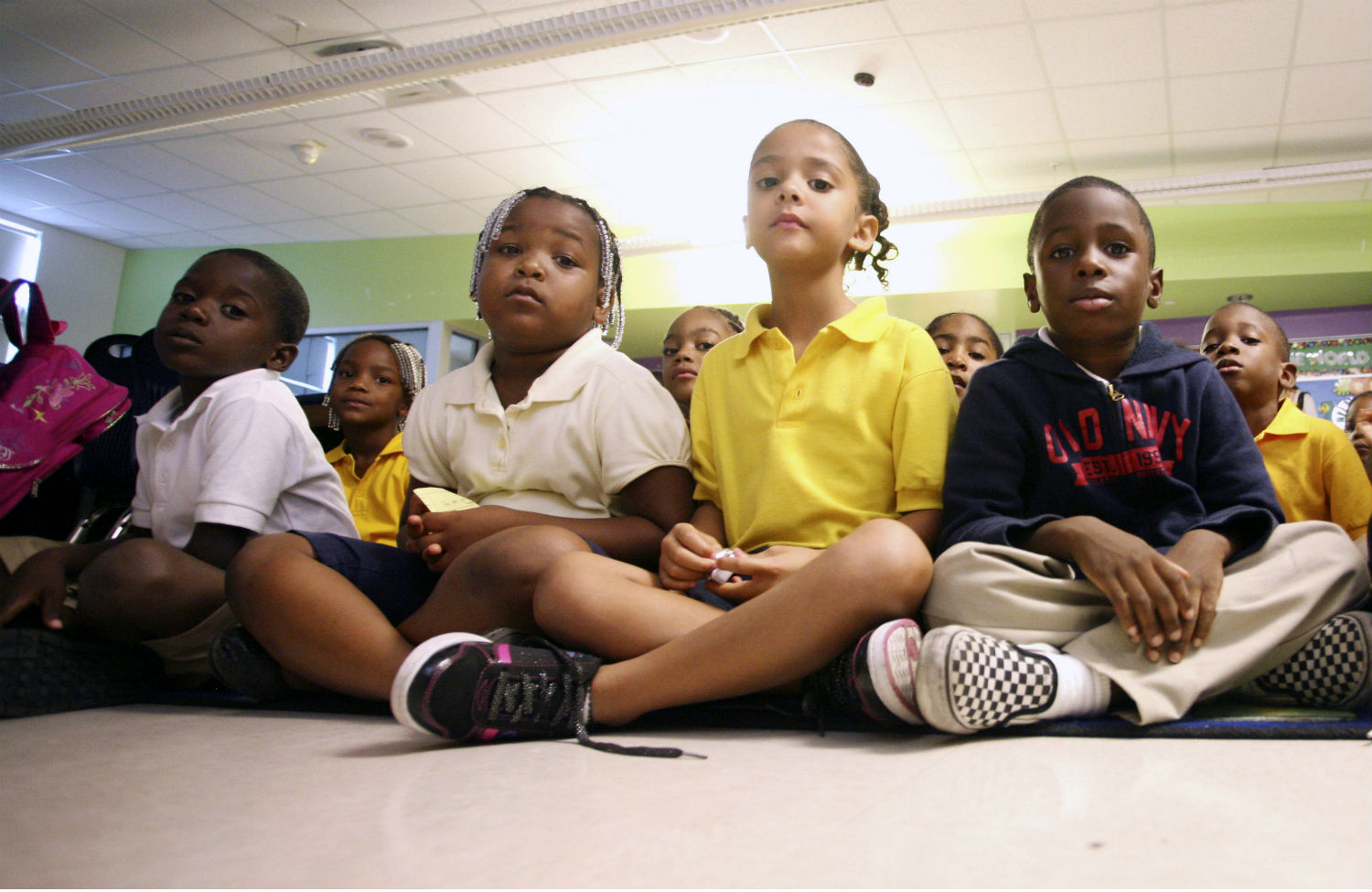 Students at Holmes Elementary School in Miami listen to their teacher, a TFA graduate, during a class. (AP Photo/J Pat Carter)

“It’s not just Jews against Arabs. It’s the Orthodox versus those who don’t think they can keep all six hundred and thirteen commandments of the Bible. It’s rich people versus poor people. At some point, something came over Israel so that everyone has his own ideas—and everyone else is an enemy,” said Reuven Rivlin, Israel’s president and member of the right-wing Likud party. “It’s a dialogue among deaf people and it is getting more and more serious.”

What’s most troubling about these quotes is not just the pervasive intolerable politics that are occurring inside the Knesset, it’s that these words are coming from a right-wing politician about his peers and nation who have veered even further right than once imaginable. This is the state of affairs in Israel, and this is the climate in which a solution seems even more unattainable.

There is a long history of Jewish writers and intellectuals who have been controversially critical of their own cultural ties. Karl Marx is a famous example, and others include Hannah Arendt, though I think her received rebellion against the Jewish community was more of a scapegoating than an active repudiation. In his recent book How I Stopped Being a Jew, Shlomo Sand has joined the ranks of thinkers who have repudiated their Jewish identity, conceivably in an attempt to do justice to the memory of it as something worth fighting for. This approach differs from those of other so-called “post-Zionists” (see Judith Butler’s Parting Ways: Jewishness and the Critique of Zionism) who attempt to rebuild a Jewish identity (sometimes secular, sometimes religious) that is detached from nationalisms, chauvinisms, jingoisms and other related isms.

“What Palestinian Media is Saying about the Jerusalem violence,” by Henriette Chacar. +972 Mag, November 7, 2014.

I was drawn to this piece by Palestinian-Israeli journalist Henriette Chacar because it reflects a growing interest in Palestinian media. The complexity with which our media covers Israeli society and interacts with Israeli media is much more comprehensive and dynamic when compared to its relationship to Palestinian counterparts. Most news-going Americans are familiar with Haaretz, the prevailing face of Israeli independent media (I should say I don’t actually know how independent they are, I haven’t checked their books). Nonetheless, much fewer are familiar with Palestinian outlets like, Ma’an News Agency. Ma’an catalogues daily the realities of occupation; stories that are often lost on those outlets whose audiences do not primarily include Palestinians. I think it leads to the false impression of Israeli society as fundamentally more plural and more three-dimensional, an impression which can strengthen the resolve of racist thinking. I look forward to more pieces that take seriously the complexities of a Palestinian national dialogue (one, which like it’s Israeli counterpart, extends across a diaspora).

In the latest development of the battle between Teach for America and Harvard activists, The Washington Post has published a series of letters between the two groups. The omission of the “detailed information” that originally accompanied TFA’s final letter makes it sort of like a joke without a punchline: the document, available on the organization’s website, is even more remarkable—and disputable—than the letters themselves. Regardless, this conflict is a fascinating one to keep your eyes on. TFA seems unable to ignore this particular group of critics for one very significant reason: they are the organization’s prime market.

In response to England’s tyrannical way of doling out justice in the colonies, the American criminal justice system was designed to allow for justice to be meted out under public scrutiny before a judge and a jury. But, as federal judge Jed Rakoff argues in The New York Review of Books, the constitutional protections that the accused are supposed to enjoy have largely been undermined by the devolution of the criminal justice system into “a system of plea bargaining, negotiated behind closed doors and with no judicial oversight.” This closed system gives prosecutors the lion’s share of the power in sentencing and that, Rakoff argues, combined with mandatory minimums, creates a climate that can incentivize innocent people to plead guilty.

“Can White Teachers Be Taught How to Teach Our Children?” by Melinda D. Anderson. The Root, November 12, 2014.

The demographics of American public education continue to change, reflecting this nation’s robust diversity. This year, for the first time, more than half of American K-12 students are children of color. Despite this demographic shift, only 18 percent of teachers are people of color. The vast disconnect between the majority white teaching profession and the lives and experiences of the majority students of color only becomes more damaging over time. We see research being released all the time underlining this point. Studies show that black children in preschool are suspended at much higher rates than white children, and the rates of suspension for black girls far exceed those of white girls in all grades. Then, of course, because of the increased criminalization of rule breaking in schools by children of color, the result is the school to prison pipeline. All these factors point to the need for racially aware, competent teachers, who understand race, class and gender as historical, political and social realities that impact their students’ lives. Teachers cannot get in front of classrooms without having done the work of deconstructing the biases, racism, sexism and classism, that we are all socialized into. The damage they do to students of color is too much.

The Root reports on a conference at University of Pennsylvania convened to discuss this very issue of how to train teachers to deal with race in the classroom in a safe, inclusive way. The author of the article, Melinda D. Anderson, says, “What’s missing is research that examines the effect of racially incompetent teachers on student achievement,” and asks the most compelling question of all. “How much of the ‘achievement gap’ can be correlated to the lack of racially proficient white teachers?”

“How Voter Suppression Helped Produce the Lowest Turnout in Decades,” by Juan Thompson. The Intercept, November 7, 2014.

This article is a short but mandatory read. It claims that voter-ID legislation in combination with fishy voter-fraud-prevention technology considerably affected voter turnout in the past election, keeping minorities away from the polls. Voter participation plummeted to an estimated 36 percent nationwide, something that hadn’t happened since the 1940s. For example, a fraud-prevention software known as Crosscheck, which was used in twenty-seven states and examines voters’ personal information to detect duplicate registrations, has been blamed for purging numerous minority voters with common last names among their communities.

We’re faced with outrageously antidemocratic voter-identification laws along with a reckless (perhaps even malicious) use of technology in the political system that result in minorities and other underrepresented groups being left out of the electoral process. I think we shouldn’t just look away.

“The Other Facebook Revolution,” by Catie Bailard. Foreign Affairs. November 11, 2014.

I recommend this article in spite of the fact that it raises more questions than it answers, and that it fails to adequately explain, as the subheading promises, “How the Internet makes people unhappy with their governments.” I clicked because I had just read an Economist article that asked why Obama’s approval rating was so low when by most standards our country is in pretty good shape. I wanted this article to explain that, and perhaps also explain why the midterm elections were such a disaster. It did not. In fact, it told me the Internet should make Americans happier with our government, because “the mirror-holding and window-opening mechanisms boost public satisfaction with government in advanced democracies and public dissatisfaction in nations with weak democratic practices.” This seems overly general if not wrong to me, but I still recommend the article for all the potential avenues of inquiry that it does suggest.

In a wide-ranging interview for The New Inquiry, Kameelah Janan Rasheed sits down with author and filmmaker Eric A. Stanley to map the contours of the prison industrial complex as it exists in the state of California. Emblematic of the carceral state writ large, the Golden State has enjoyed a progressive reputation despite operating one of the most brutal and massive state prison systems in America. But with the recent passage of Prop 47—and the reduction of harsh sentencing to follow—Stanley and Rasheed’s conversation has special resonance. As they talk through abolitionist futures and prefigurative politics, queering liberation movements and accountable visions of justice, it becomes clear that the urgency propelling these intersectional movements to seek radical change is the human cost of mass incarceration.

“The Movement for Racial Justice is Bigger Than a Political Party,” by Rashad Robinson. Ebony, November 12, 2014

Last week’s midterm election proved to be devastating for the Democratic Party, as the Republicans will now control the House and Senate during the last two years of President Obama’s tenure. Executive director of ColorofChange.org Rashad Robinson wrote an uplifting piece this week for Ebony.com maintaining that black voters increased their political voice this year compared to the 2010 midterm elections, even with increased voter suppression efforts, and that the racial struggle for progress is larger than a political party.

“Abortion in Missouri Is the Wait of a Lifetime,” by Justin Glawe. The Daily Beast, November 12, 2014.

Texas has received national attention for its restrictive abortion practices, but Missouri is now the state with the most prohibitive abortion laws in the country. In September, Missouri legislators passed HB 1307, which requires women to wait a full seventy-two hours (not just three calendar days) before receiving an abortion in Missouri’s only clinic. Previously, an average of 6,000 women each year had procedures at the clinic. The new law means women who travel to St. Louis for the procedure will have to take more time off of work, which can deter some women from following through. It also makes a difference in whether some women will have medical or surgical procedures and gives no exception to women who are victims of rape or incest. Finally, “the new waiting period means something almost every pro-life advocate doesn’t want: abortions later in pregnancy.”