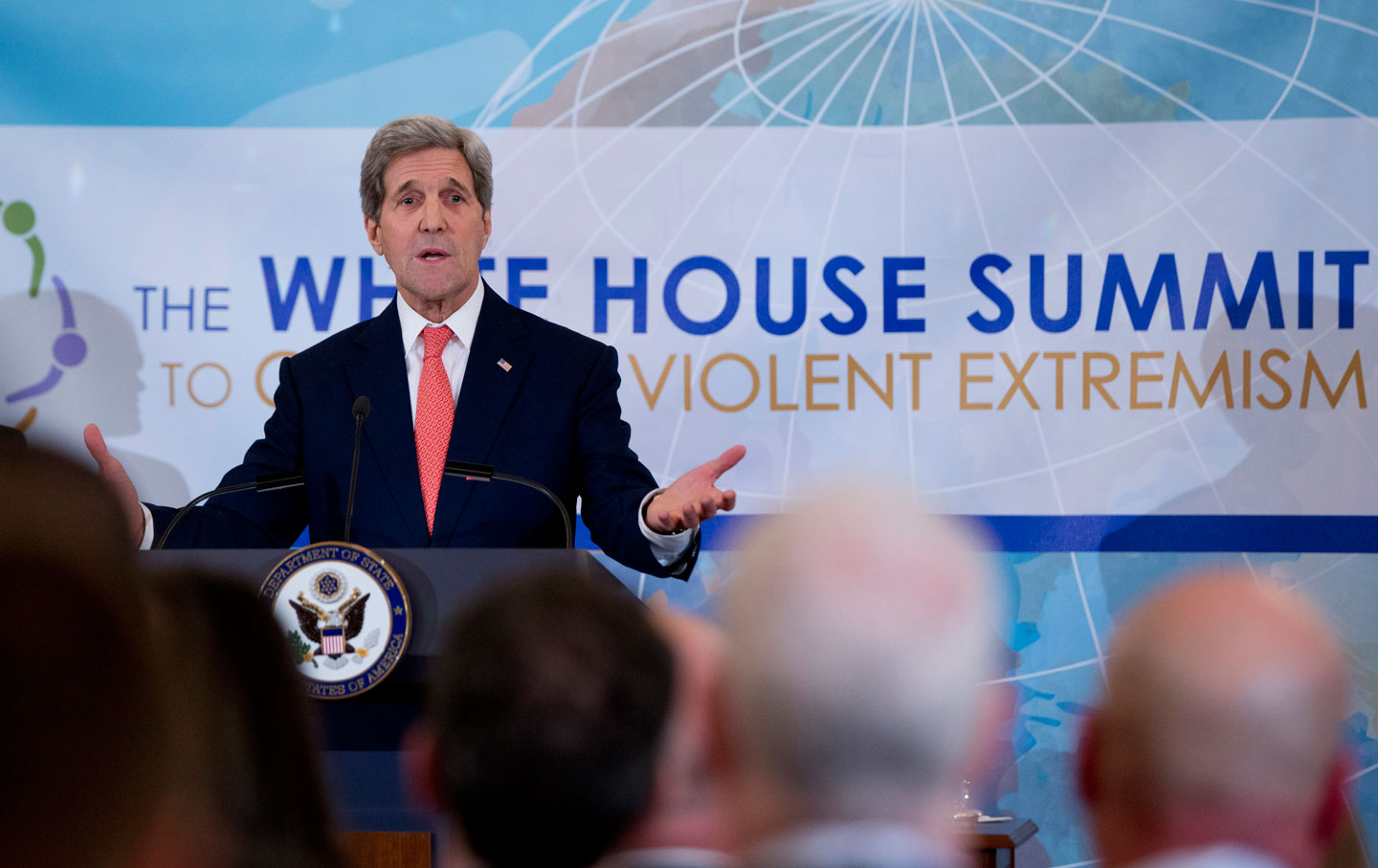 Imagine that you’re in the FBI and you receive a tip — or more likely, pick up information through the kind of mass surveillance in which the national security state now specializes. In a series of tweets, a young man has expressed sympathy for the Islamic State (ISIS), al-Qaeda, or another terrorist group or cause. He’s 16, has no criminal record, and has shown no signs that he might be planning a criminal act. He does, however, seem angry and has demonstrated an interest in following ISIS’s social media feeds as they fan the flames of youth discontent worldwide. He’s even expressed some thoughts about how ISIS’s “caliphate,” the Islamic “homeland” being carved out in Syria and Iraq, might be a place where people like him could find meaning and purpose in an otherwise alienated life.

This article originally appeared at TomDispatch.com. To stay on top of important articles like these, sign up to receive the latest updates fromTomDispatch.com.

A quick search of his school records shows that his grades, previously stellar, are starting to fall.  He’s spending more time online, increasingly clicking on jihadist websites. He has, you discover, repeatedly read news stories about mass killings in the U.S. Worse yet, his parents own legally registered guns. A search of his medical records shows that he’s been treated by a psychiatrist.

As a member of law enforcement, what exactly do you do now? You know that in recent years, mass killings have become an all-too-frequent part of American life. There were the Chattanooga military recruitment office shootings; the Charleston church killings; the abortive attack on a Mohammed cartoon contest in Garland, Texas; the Boston marathon bombing; the Sandy Hook school slaughter; and the movie theater shootings in Aurora, Colorado, and most recently, in Lafayette, Louisiana. Loners, losers, jihadis, racists — label the killers as you will — as a law enforcement agent, you feel the pressure to prevent such events from happening again.

Given the staggering array of tools granted to the national security state domestically since 9/11, it’s a wonder (not to say a tragic embarrassment) that such killings occur again and again. They are clearly not being prevented and at least part of the reason may lie in the national security state’s ongoing focus on “counterterrorism,” that is, on Islamic extremism.  For the most part, after all, these mass murders have not been committed by Islamic extremists. From the more than 100 deaths of this sort since the Aurora shooting three summers ago, only eight were killed by individuals inspired by Islamic radicalism.
Soon after the attacks of September 11, 2001, President George W. Bush and Attorney General John Ashcroft declared an all-out, no-holds-barred policy of terrorism “prevention.” Another 9/11 was to be avoided at all costs and a “global war on terror” was quickly set in motion.

Domestically, in the name of prevention, the government launched a series of measures that transformed the American landscape when it came to both surveillance and civil rights.  Yet despite the acquisition of newly aggressive powers of every sort, law enforcement has a woeful record when it comes to catching domestic mass murderers before the damage is done.  In fact, a vanishingly small number of them have even shown up on the radar of the national security state.

The ability to collect all phone metadata from all Americans has not deterred these attacks, nor has the massive surveillance of Muslim communities in the U.S., nor did the use of FBI informants to encourage often disturbed, trash-talking individuals towards jihadist crimes.  In short, the government’s strategy of preventing attacks by individuals we’ve now come to call “lone wolves” has failed, despite the curtailing of the First Amendment’s guarantee of freedom of association, religion, and speech and the Fourth Amendment’s guarantee of freedom from warrantless surveillance.

Time for a Change

As someone who has followed the development of the national security state carefully in the post-9/11 era and spent a fair amount of time talking publicly and privately with law enforcement agents and officials, I can see that many of them are aware of such problems and frustrated with the old approach. They know something’s not working and that it’s time for a change — and a change is, in fact, coming.  Whether it’s the change that’s needed is the question.

Aware of the legacy of the Bush years, the Obama White House, the Department of Homeland Security, and the FBI have spent much time and effort rethinking previous policies and have designed what they are calling a “new” approach to security.  It’s meant to partner prevention — the dominant strategy of the past — with a new word that has come into favor: “intervention.” The goal is to intervene with youth attracted to extremism before violence can occur. As with so many attempts at government redesign, the new policy already has its own name and acronym. It’s labeled “Countering Violent Extremism,” or CVE. It’s meant to marry the post-9/11 law enforcement and intelligence-driven profiling of potential terrorists with an approach borrowed from non-law-enforcement programs like those designed to help individuals deal with and break the pattern of drug or alcohol abuse.

The new CVE program will theoretically rely on a three-pronged strategy: building awareness of the causes of radicalization, countering extremist narratives (especially online), and emphasizing community-led intervention by bringing together law enforcement, local service providers, outreach programs, local governments, and academics. It is, in other words, meant to be a kinder, gentler means of addressing potential violence before it occurs, of coming to grips with that 16-year-old who’s surfing jihadist websites and wondering about his future.

The White House recently convened a “summit” on this “new” strategy, with law enforcement officials, Muslim community leaders, and others, and Congress is now considering a bill that would create a new government agency to implement it.  It sounds good.  After all, who’s against keeping the country safe and reducing violent extremism? But just how new is it really? In essence, the national security state will be sending more or less the same line-up of ideas to the plate with instructions to potentially get even more invasive, taking surveillance down to the level of disturbed kids and community organizations.  Why then should we expect the softer-nicer version of harder-tougher to look any better or prove any more effective? Coming up with a new name and an acronym is one thing, genuinely carrying out a different program involving a new approach is another.

With that in mind, here are five questions based on past errors that might help us all judge just how smart (or not so smart) the CVE program will turn out to be:

To be fair, there are some small signs of a desire for change in the law enforcement community. In recent cases involving teenagers attracted to ISIS, the FBI has shown a less punitive approach, indicating a desire not to arrest them or at worst to charge them in ways that would avoid the outrageously long sentences that have become the new norm of the post-9/11 years. The courts, too, may be starting to show signs of a new sense of restraint. In Minneapolis, for instance, a federal judge is putting teens charged with terrorism crimes in halfway houses or letting them out on bail, highly unusual for such cases.

It’s easy enough to blame Islamic fundamentalism for luring lost American children into violent networks of jihadism by offering meaning in lives that feel meaningless and individualized attention (on the Internet) for young people who feel ignored and invisible. It’s harder to face the fact that the country is faltering when it comes to providing constructive remedies across racial and religious lines for those who retreat into violence in reaction to hopelessness and isolation.

In reality, it probably matters little how the government tries to create predictive metrics for individuals who might someday turn to mass violence, or what groups it targets, or how it deploys law enforcement to “solve” this problem.  Too many youths experience periods of doubt, depression, anxiety, anger, and instability to predict which few will turn to acts of violence. What’s needed instead is a less law-enforcement-oriented style of thinking and the funding of a far less punitive style of interventionism that would actually provide young people at risk with support services, constructive outlets, and reasons to feel that a rewarding life might someday be theirs. Isn’t it time, in other words, to put as many resources and as much innovative thinking into our children as into our wars?