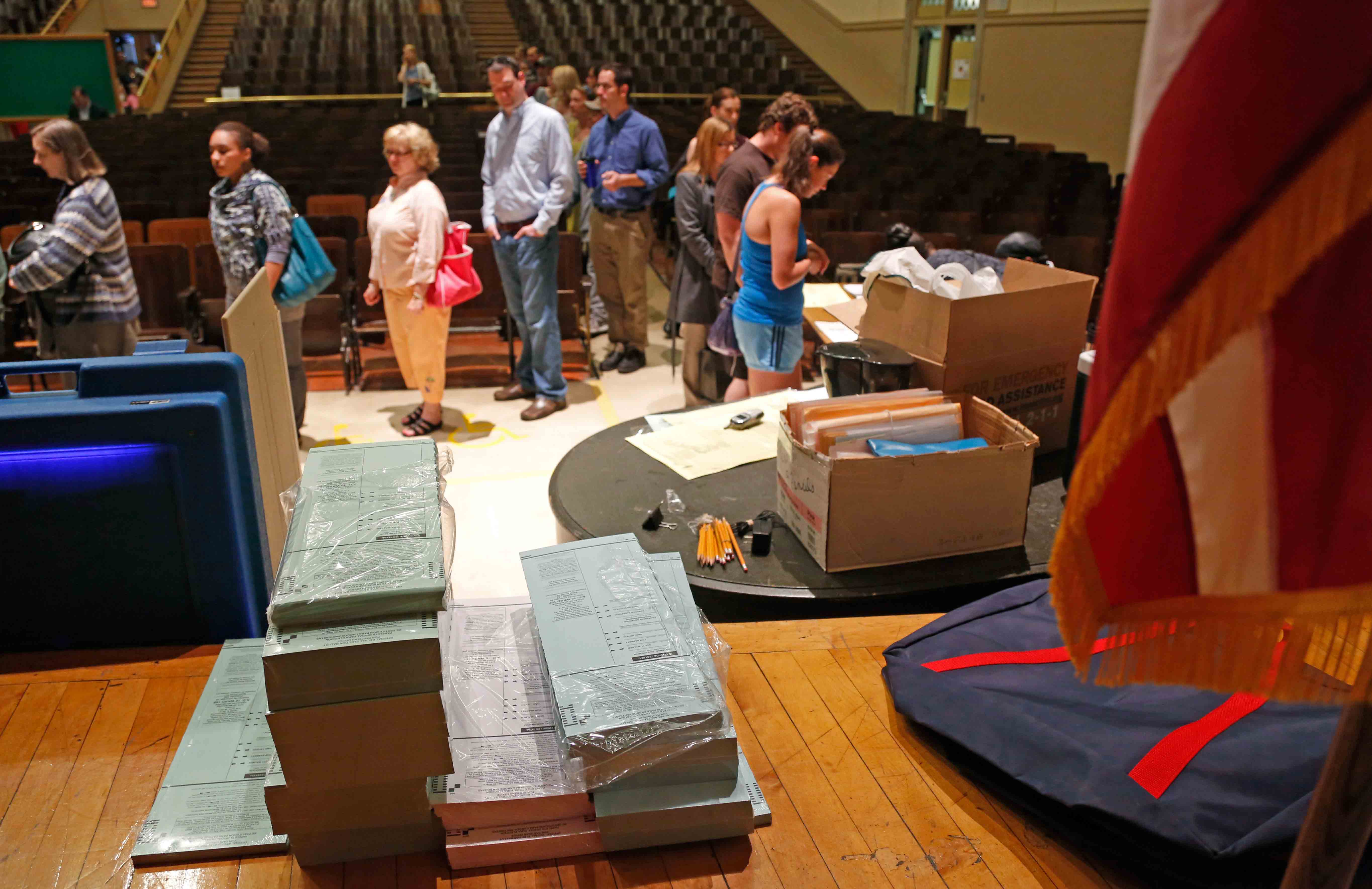 Voting ballots are stacked and ready as voters wait in line to cast their ballot Tuesday, June 5, 2012, in Milwaukee. (AP Photo / Jeffrey Phelps)

Donald Trump’s refusal to commit to accepting the legitimacy of the presidential election is an unprecedented attack on the foundation of American democracy and rightly drew widespread condemnation from political and media leaders.

Yet many Republicans, while condemning Trump’s comments, still stoked fears of a rigged election after the third presidential debate. “Let’s not kid ourselves, can we please not act like voter fraud and irregularities don’t exist,” said RNC Chair Reince Preibus. “I don’t think you’re going to get Republicans to back down on the fact that voter fraud is real and it needs to be dealt with, but it isn’t something in most cases that overthrows an election.”

Other commentators, like CNN’s Jake Tapper, said fraud was a small problem, but so was voter suppression. “CNN equating voter fraud and suppression as things that sometimes happen, but very rarely. That’s very flawed,” tweeted Daniel Nichanian of the University of Chicago.

This is a dangerous false equivalence. Voter fraud is a very small problem in American politics and voter impersonation, which GOP-backed voter-ID laws are meant to address, is exceedingly rare. As I’ve written over and over, you’re more likely to be struck by lightning than impersonate another voter at the polls.

The real danger to American democracy stems from GOP efforts to make it harder to vote. New voting restrictions—like voter-ID laws, cuts to early voting and barriers to voter registration—that are in place in 14 states for the first time in 2016 will make it harder for millions of eligible voters to cast a ballot. And voters are lacking crucial protections because this is the first presidential election in 50 years without the full provisions of the Voting Rights Act.

That is the problem we should be focusing on. Take Wisconsin, for example, where Preibus warned of “voting irregularities in Milwaukee” last night. Wisconsin didn’t present a single case of voter impersonation in court to justify its voter-ID law. Yet 300,000 registered voters, according to a federal court, lack strict forms of photo ID and could be disenfranchised by the law. “It is absolutely clear that Act 23 will prevent more legitimate votes from being cast than fraudulent votes,” wrote Judge Lynn Adelman. Another federal judge in Wisconsin, James Peterson, wrote, “A preoccupation with mostly phantom election fraud leads to real incidents of disenfranchisement, which undermine rather than enhance confidence in elections.”6

Zack Moore, a 34-year-old African-American man from Illinois who brought an Illinois driver’s license, Social Security card, and proof of Wisconsin residency to the DMV, but was not given a Wisconsin voter ID.8

Claudell Boyd, a 62-year-old African-American man from Illinois who made 2 trips to the DMV, but was not issued a valid voter ID because one letter was misspelled on his birth certificate.9

Christine Krucki, a 90-year-old white woman who’s been voting since 1948 and made three trips to the DMV, bringing an Illinois photo ID, proof of residence in Wisconsin, a birth certificate, and her marriage certificate, but could not get a Wisconsin voter ID.10

Sarada Hanumadass, a 42-year-old Indian-American woman who’s been a naturalized US citizen since 8 but was told she’d need to pay $345 for her naturalization papers, which could take up to two years, to get a Wisconsin voter ID.11

The same is true in North Carolina, where there are many more people who have been blocked from the polls than cases of voter impersonation. As I wrote in The Washington Post:12

In North Carolina, for example, the watchdog group Democracy North Carolina documented more than 2,300 cases of voters whose ballots were rejected in 2014 because of the state’s elimination of same-day registration and out-of-precinct voting. That was 1,150 times greater than the two cases of voter impersonation committed in North Carolina from 2002 to 2012, out of 35 million votes cast.13

Last night many pundits praised Al Gore for conceding to George W. Bush, without noting the many instances of disenfranchisement during the 2000 election in Florida that raised real questions about the legitimacy of the election outcome. Such as the fact that 12,000 registered voters, who were disproportionately African-American and Democratic-leaning, were wrongly labeled as felons and purged from the rolls.14

Trump can’t even keep his story straight on how the election is rigged, offering at least five different explanations. First he claimed, after voter-ID laws were struck down in places like North Carolina that “we may have people vote 10 times.” Then he said undocumented immigrants would “pour into the country so they can go and vote.” Then he said, “the election is absolutely being rigged by the dishonest and distorted media pushing Crooked Hillary.” Then he said “1.8 million deceased individuals” will vote for “somebody else.” Then in last night’s debate he said of Hillary Clinton, “She shouldn’t be allowed to run. She’s guilty of a very, very serious crime. She should not be allowed to run, and just in that respect I say it’s rigged.”15

On MSNBC this morning, Trump campaign manager Kellyanne Conway said Trump would accept the election results “absent widespread voter fraud, irregularities and malfeasance.” Let’s be very clear: It’s incredibly unlikely there will be widespread voter fraud on Election Day. But there will be eligible voters who show up to vote and are turned away from the polls. That’s the real threat to election integrity we should be focusing on16