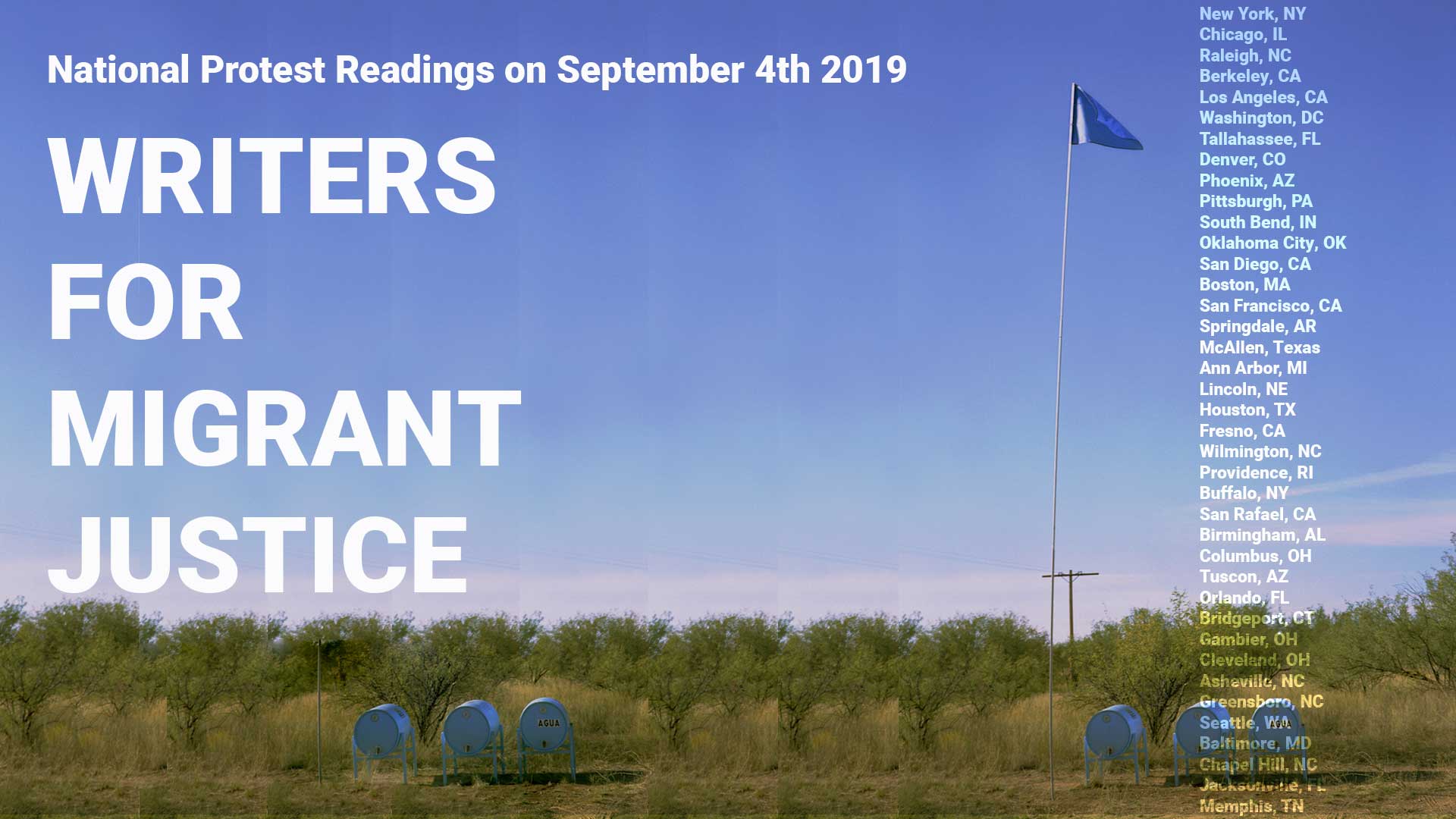 (Courtesy of Writers for Migrant Justice)

It started with an e-mail: On June 28, 2019, Javier Zamora, Jan-Henry Gray, Anni Liu and I all began brainstorming a way for poets and writers to organize in solidarity with detained migrants. Zamora and I had been in touch months earlier, knowing that we needed to take some action to help stop the detention, separation, and cruelty being enacted against migrant children and their families. Yet, we didn’t know when or in what form that action would take. The result of our email exchanges was the formation of a new campaign, Writers for Migrant Justice.

By July, I sent out a tweet asking for poets and writers to join a national day of action for migrant justice. The goal was to hold readings in cities across the country to raise $500 at each live reading, plus an additional $5,000 online, to support detained or formerly detained migrants. But as the support rolled in, we blew through those initial aspirations: In the end, over 40 cities hosted Writers for Migrant Justice events on and around September 4, and we raised well over $40,000 that we’ll be donating to the group Immigrant Families Together. These funds will be used to post bail so that mothers can be reunited with their children. It will also help pay for legal expenses, and post-release expenses such as food, transportation, and mental health services.

But this groundswell of support didn’t come out of nowhere—it was the result of years of organizing by undocumented and formerly undocumented poets and writers to make migrant voices heard in the literary community and the greater world.

Undocumented writers have been at the forefront of a lot of recent organizing and have been instrumental in setting new terms for the debate around migration in the past few years. But their voices often aren’t heard directly, for a few key reasons: First of all, despite a desire in activist spaces to center the voices and experiences of those most directly impacted, we often have to recognize the very real danger that comes with going public about one’s undocumented status. Undocumented organizers therefore sometimes ask that those with citizenship or documentation act as the face of organizing, and relay the messages of our undocumented co-organizers, so that they can avoid the risk of deportation or retaliation. And as a corollary, undocumented writers many times don’t have the same level of access to the media and other institutions that people such as nonprofit directors or university professors do, and therefore undocumented writer’s voices can go unheard by the wider public. The media also often looks by default to academics and nonprofit directors for comments on issues related to migration, instead of looking first to grassroots activists who are directly impacted by the issues being discussed.

But undocumented activists are most definitely leading the work, vital work that deserves to be recognized. To give just a few examples: In 2015, Zamora, Marcelo Hernandez Castillo, and I cofounded the Undocupoets Campaign. Together, we worked to overturn discriminatory guidelines at publishing houses that required “proof of US citizenship” in order to submit work for consideration for contests, a requirement that effectively barred undocumented writers from submitting their first books. That collective is now being led by Castillo and two other formerly undocumented poets named Janine Joseph and Esther Lin. It was through organizing with Undocupoets that Zamora and I met a handful of migrant writers and activists throughout the country, which made the success of the “Writers for Migrant Justice Campaign” possible.

Flowers on the Inside

Undocumented or formerly undocumented writers and activists have partnered to launch similar campaigns around migrant justice nationally. For example, the migrant writer Jose Antonio Vargas founded the nonprofit Define American in 2011. In 2013, 14 undocumented writers participated in the first retreat called “UndocuWriting” with the organization Culture Strike as a space for undocumented writers to share their work and gain strength through their shared creativity. Just this month, another five undocumented visual artists (Emulsify, Brian Herrera, Karla Daniela Rosas, Julio Salgado, and Maria Hu Wu) teamed up with organizations in the United States and Mexico to create “Flowers on the Inside,” which sends art and messages of support to undocumented migrants in detention.

Beyond organizing, undocumented writers are shaping how we understand the experience of migration, and how we as a country should respond to the manufactured “migrant crisis” and the deportations and ICE raids that have continued under presidents, Republican and Democratic, over the past decade. The work of Alan Pelaez Lopez, an Afro-Indigenous poet from Oaxaca, Mexico, asks us to expand our conception of who is a migrant, when saying: “Undocumented immigrants are indigenous, black, queer, trans, & resilient. Being undocumented didn’t just happen. We come from a place of scarcity and incredible possibility. This is not the end nor the beginning. Undocumented eloteros, domestic workers, graphic designers, writers, and construction workers have started their own businesses without DACA. We should look at them for leadership. Yes, let’s fight for DACA, & let’s fight harder for all of our community members who were never seen as valuable to benefit from the program.”

Sonia Guiñansaca of UndocuWriting is a poet and activist whose work focuses on the intersections between various systems of oppression, such as the American prison system and immigration system. In a conversation with Interview magazine, Guiñansaca said, “What does the world look like without borders? What does the world look like without prisons and detention centers? We can’t just be reactionary. We need big thinking, big visions, and a radical imagination of what’s possible. Give it language, give it imagery, give it music, give it a feel. That’s what’s giving me hope.” Guiñansaca refuses the “good migrant” myth, the notion that only some migrants—children, young mothers, others deemed “innocent” and therefore acceptable—are worthy of staying in the United States. Guiñansaca’s activism and poetry reminds us to push beyond punitive and carceral thinking of detention centers in order to fight for systems of integration, healing, and self-determination instead.

Yosimar Reyes was probably the first undocumented poet that I had ever heard of. I remember hearing his name through friends in San Francisco and then going online to find his chapbook For Colored Boys Who Speak Softly. Reyes writes often about the intersection of migration and queerness, and he is one of the best orators and performance artists I have ever witnessed. Through his compelling spoken word, such as in this poem, “The Legalities of Being,” he powerfully brings attention to the everyday experiences of undocumented communities, outside of the sensationalized headlines. Reyes is brilliant in his ability to portray the nuances of everyday life, with its joys and fear and love. In the aforementioned poem, Reyes writes, “There is a social construction in my head that America is better, that America will grant me freedom, that America will grant me proper education, that America is a place of justice, when the reality is that I have never seen the fruit of any of these promises. We are still at the same place as when we arrived.”

Even the wording of our campaign, Writers for Migrant Justice, was chosen carefully to help shape the terms of the debate, and to make clear the difference between “migrants” and “immigrants”: The word “immigrant” suggests that a person is coming from a foreign country into another country that is not of their origin. To say “immigrant” posits that we are recognizing the US government as having moral authority over the borders of this continent and thus the land. The United States consists of stolen lands, and by saying “migrants” instead, we are attempting to denounce the notion that its government has any claim to say who belongs on this land or not. For that jurisdiction, we rely on the native nations who are allowing us to live here. There are indigenous people who are in migrant detention camps today, some of whom had the border placed right on top of them. Indigenous migrants (not immigrants) are being incarcerated for moving across their own land. We planned our wording and our actions meticulously.

#WritersforMigrantJustice in Los Angeles aka when you trying to abolish ICE and also having a party with friends.

Through our poems, poetry readings, interviews, essays, and protests nationally, migrant writers are acting as leaders and organizers in the movement for migrant justice. Through small, unacknowledged daily gestures in writing and activism, alongside the many other larger-scale gestures like civil disobedience, undocumented writers are forging new ways of fighting back against the oppression meted out by the US government. In this moment when too many in the media and in government are demonizing migrants, there needs to be more recognition of the migrant communities that are fighting back against this vitriol. There needs to be more ears listening to the words of undocumented writers that are currently speaking up.