The United States Supreme Court ruled last week that the Trump administration can now deny asylum to most migrants arriving at the US-Mexico border. At the same time, Immigration and Customs Enforcement (ICE) is detaining historic numbers of immigrants under increasingly unsafe conditions. As long as Trump is in the White House, there are no easy fixes, but three organizations have come together to send a message to detained people: Estoy contigo, or I’m with you.1

To send messages to those detained by ICE in migrant detention centers, visit the Flowers on the Inside website.

The arts organization the Center for Cultural Power (formerly CultureStrike) has teamed up with Forward Together and the Tijuana, Mexico–based LGBTQ migrant shelter Casa Arcoiris for Flowers on the Inside, a website launched this week and created by Forward Together where messages of “love, support, and solidarity” can be written to detained migrants. The messages will be printed on postcards created by five undocumented artists and distributed by Casa Arcoiris to detention centers nationwide.2

Undocumented, queer artist Julio Salgado said the project started as a conversation with legal worker Michael Galvan, who works with Casa Arcoiris. The 40-bed shelter is the first in Tijuana to respond to the specific needs of LGBTQ migrants. Last year, Casa Arcoiris served as a safe landing place for more than 250 people, who were also able to access legal representation, HIV/AIDS treatment, and psychological and emotional health consultations. Galvan provides legal assistance, and helps run a monthly postcard writing project that brings together community members to write letters to detained people.3

M Erazo, an artist who contributed to the project, said they view their illustration as an offering to detained people. “Flowers On the Inside brings joy to folks directly affected by America’s violent and racist immigration and incarceration policies,” they told me. “As a formerly undocumented person in a mixed-status family, I feel heartbroken, scared, angry, and often disempowered by the way we are treated in this country. Creating art that raises awareness, spreads knowledge, and promotes healing has been my way to resist.”4

Salgado told me that as an undocumented artist, it’s important to continue drawing attention to people detained in for-profit detention centers. “No one should be caged,” Salgado said. “Until we can get rid of all detention camps, I want to remind folks inside that we are in solidarity with them.”5

Below are some of the Flowers on the Inside postcards that message writers can choose from, along with a few words about the pieces from each of the artists.6 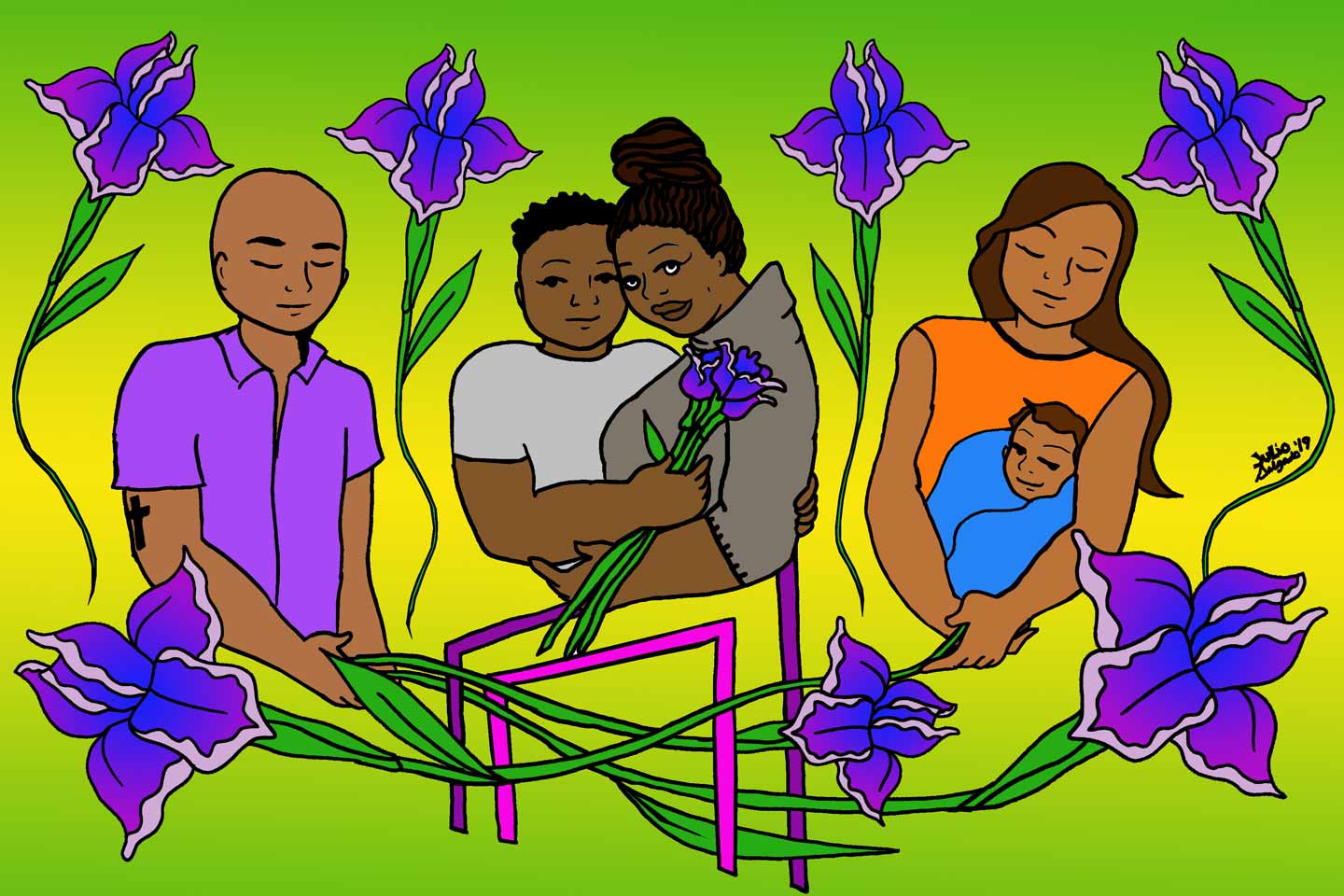 JULIO SALGADO, Los Angeles, CA “As an artist, you’re always imagining the impossible, and if you talk to organizers that are in touch with folks on the inside, they will tell you that detention centers make it impossible to communicate. The image I created has irises going through symbolic jail bars and connecting folks to each other.” 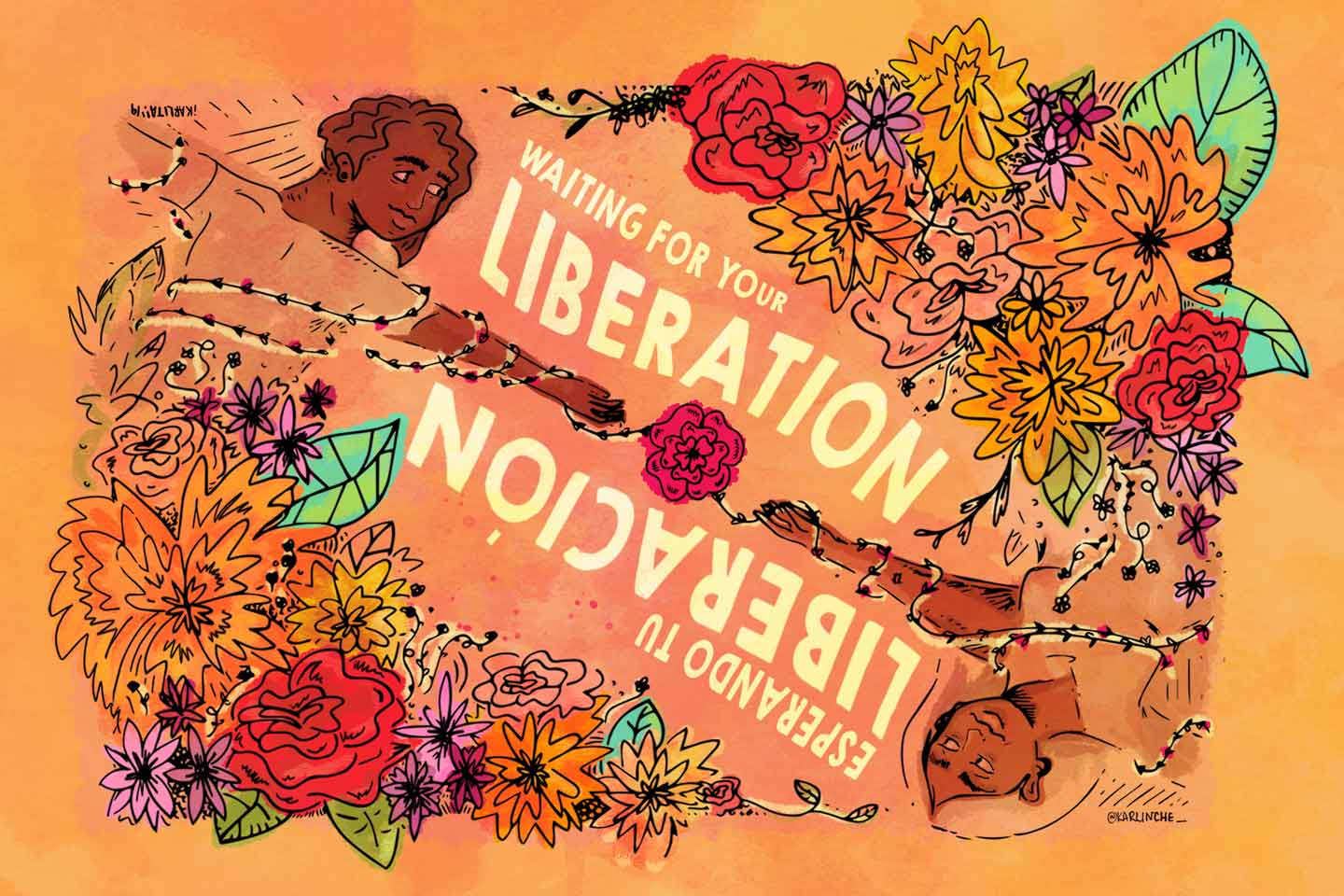 KARLA ROSAS, New Orleans, LA “My piece shows two figures reaching towards each other, both of them emerging from a field of flowers. I wanted my piece to be clear that when we use the word ‘waiting’ we don’t mean it in a passive sense. We are actively thinking of our detained communities on the inside and working alongside them for liberation.” 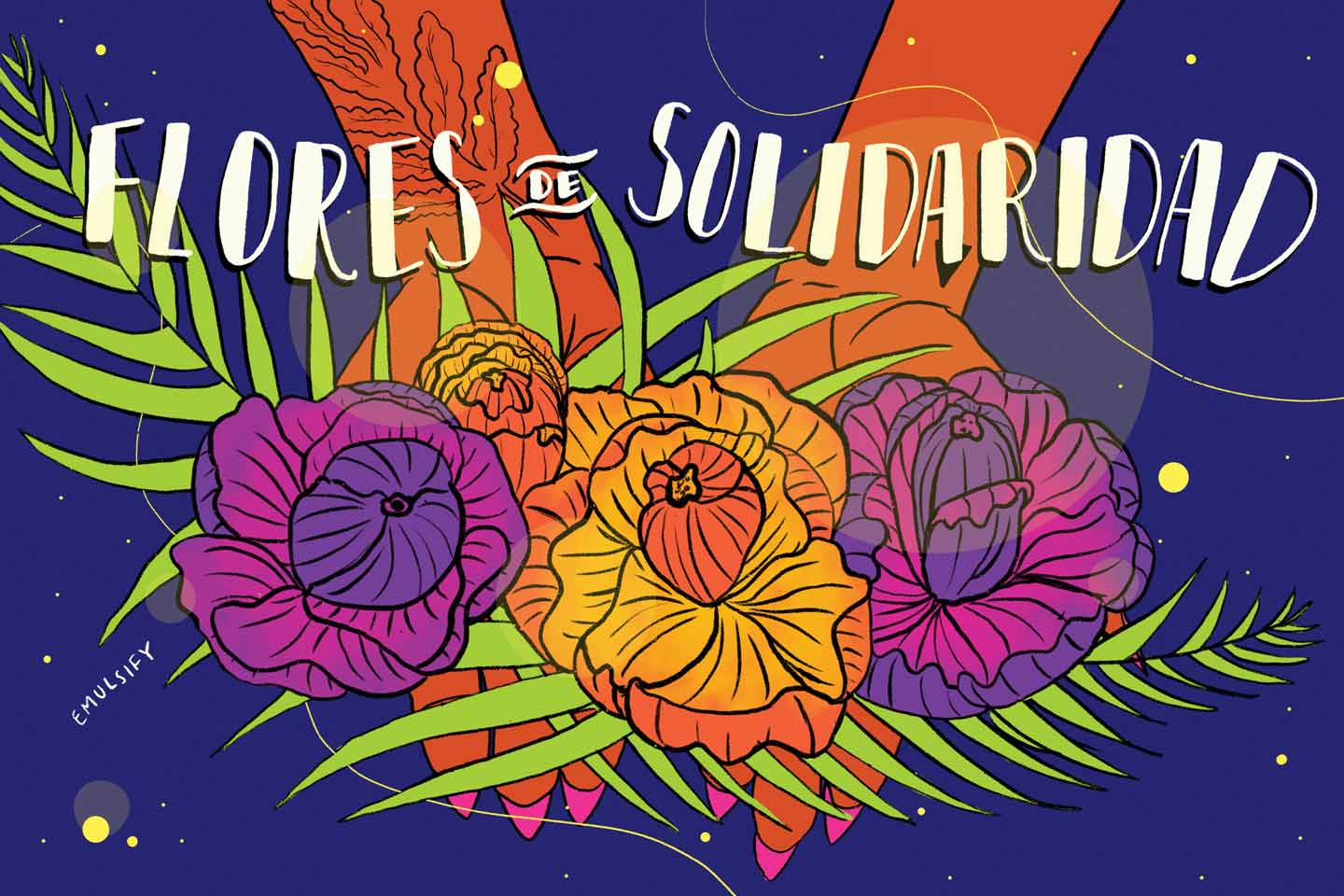 EMULSIFY (M ERAZO), Brooklyn, NY “My illustration is an offering to all the folks detained for migrating in an effort to survive and change their circumstances. It is a message of solidarity and love. I chose peonies because they are my favorite flower, and they are a symbol of compassion and have been used for their healing properties.”

BRIAN HERRERA, Chicago, Illinois “This piece is a message I wish I had when I crossed the border when I was 11. The tropical flora is a reminder of home for Central American natives, all the flowers illustrated are national flowers of various central American countries. The hand is stretching from the ground rising upwards to signify que tu tierra madre y yo, estamos contigo y siempre lo estaremos, or “your motherland and I are with you and always will be.”