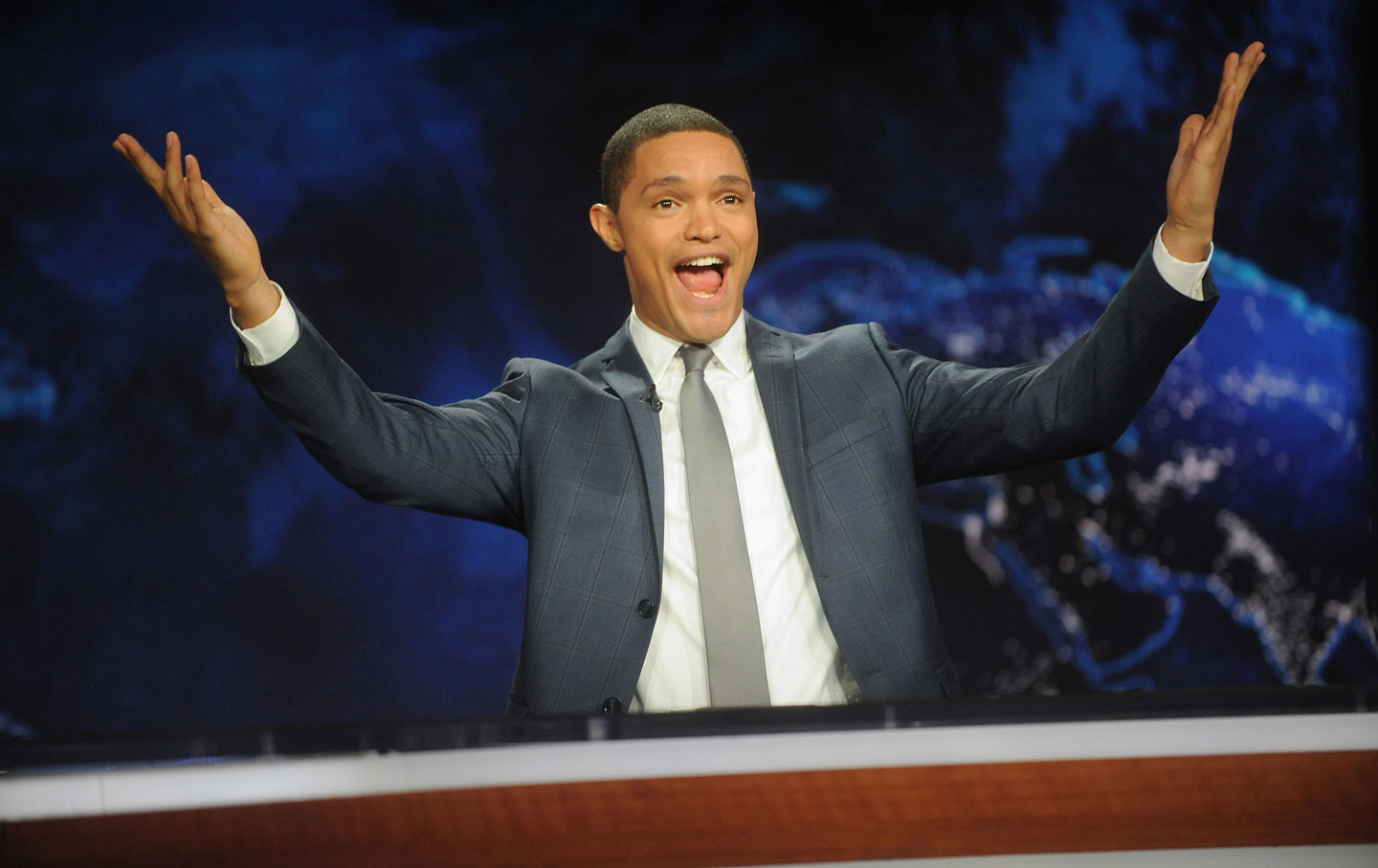 Unlike Jon Stewart, Trevor Noah doesn’t ground his comedy in a political ideology. This is of course politically disappointing to people who saw Jon Stewart as someone who not only raised awareness but influenced politics and sometimes even policy. But what’s less obvious is that the lack of political perspective makes the show less funny.

Like millions of viewers in the United States and across the globe, I depended upon Jon Stewart, night after night, to excoriate people in high places who had messed with ordinary people during the day. When Comedy Central announced that Trevor Noah would replace Stewart, I knew that the odds of someone doing as good a job were slim. But I defended Noah when he came under attack for a handful of tweets that ranged from offensive to not at all offensive (just critical of Israeli policy), and from unfunny to really, really unfunny. It seemed an unfair point of focus. I was hopeful that his background, so different from Stewart’s, would bring a fresh perspective. And I thought it went without saying that Noah would continue the show’s political focus and insight.

But then a week before the new Daily Show launched, Trevor Noah told a group of reporters whom Comedy Central had invited to the Daily Show studio that he was “not a political progressive,” but “a progressive person.” Noah said,

What makes me a progressive, in my opinion, is the fact that I try to improve myself and by and large improve the world that I’m in—in the smallest way possible. I know that I cannot change the entire world, but I’ve always believed I can at least affect change in my world. So I try and do that. Progression, in my opinion, is often identifying shortcomings—whether it’s views or the things you’re doing in your life, your relationships—and trying to find the places where you improve on those.

The personal is, of course, political, but Noah wasn’t referring to identity politics or advocating an intersectional analysis. He seemed to equate progress with self-improvement. And he sounded like a self-help guru, or a student-government candidate just starting out.

The first weeks of Trevor Noah’s Daily Show have revealed a host whose perspective is unclear. This isn’t just a political problem but a comedic one. Despite being consistently affable and charming, Noah rarely puts forward a personal perspective about politics, or anything. And this lack of perspective makes the humor of his monologues and interviews feel haphazard. The sooner he figures out who he is, what he’s going for as a person and a host, the sooner he will be able to find a voice for conveying his vast comedic gifts.

We had a preview of his bro-ish humor during the backlash to Noah’s tweets last spring. Noah was accused of being a misogynist and, again, not funny, for his tweet from 2011: “ ‘Oh yeah the weekend. People are gonna get drunk & think that I’m sexy!’—fat chicks everywhere.” While he didn’t do or say anything nearly as overtly offensive on the show, there were echoes of bro-ish sexism and body shaming. Noah set up a segment on Lena Dunham’s interview with Hillary Clinton by saying, “Hillary knows how to win the nation. First you have to win the butt-smotherers.” With as much nuance as displayed in the joke, the screen behind Noah showed a partially blurred image of Allison Williams’s character receiving analingus on an episode of Girls.

The joke was pretty sophomoric and slightly slut shaming, in a vague and thoughtless way. Then he showed a clip in which Dunham asked Clinton if she was a feminist, to which Clinton responded, “Yes, absolutely.” When Dunham laughed in glee, Noah paused the footage and said, “I haven’t seen Lena Dunham that excited since HBO made its office clothing-optional.” Really? Lena Dunham’s highly political, feminist, and ground-breaking decision to show a character with a “normal body” naked on TV is reduced to a punchline about how much she likes to be naked.

Noah went for an easy punch line and some body-shaming when he interviewed Chris Christie, too: Recalling the first time he met the governor, Noah says, “You were wearing shorts. I will never…forget it. You look good in shorts.” Christie responds to the implicit fat joke by rolling with it and making fun of his own appearance: “There’s no requirement to lie in your first week on the job.”

Noah did cover John Boehner’s retirement and made a statement about how right-wing Washington has become: “Even John Boehner, the man once ranked the eighth-most-conservative man in Congress, wasn’t right-wing enough.… It’s like crack telling meth that it’s not addictive enough. ‘Yo, man, you got to step your game up, crystal, you make teeth fall out, big deal. I put down Whitney Houston.’” But the joke was timid, at least politically, and the only risky part was the Whitney Houston reference, which got a groan.

The retirement of John Boehner and Jon Stewart, which should have been a short joke, or perhaps a few jokes, was stretched into a meta and self-referential report from correspondent Jordan Klepper, who told Noah, “I get how you feel. Taking over for John—Boehner—is hard.” Noah replied, “Pretty soon everyone will be saying, John please come back.” The Boehner/Boner jokes didn’t have a real perspective, political or otherwise. There was no personality. And so it fell pretty flat.

In contrast, correspondents Roy Wood and Jordan Keppler brought an angle and some character to the show, which made them funnier. It wasn’t earth-shattering (no pun intended), but Roy Wood Jr.’s report on NASA’s discovery of liquid on Mars was the first time I laughed during the debut episode. It was also the first time racism (and not just race) was addressed on the show. When Noah asks Wood what he can tell us about the story, Wood responds, “I can tell you I don’t give a shit.” When an optimistic Noah says, “Doesn’t this raise the possibility that one day people can live on Mars?” Wood responds, “People like who? Me and you? How am I going to get there? Brother can’t catch a cab, you think we can catch a spaceship?… Black people ain’t going to Mars! And that includes you, Trevor.”

The other funniest segment of the show was a joint investigation by white Jordan Keppler and black Roy Wood into police bias. Again, they had strong perspectives, which drove the comedy and the political message. During an interview with former NYPD detective and Fox News contributor Bo Dietl, Keppler says, “This is a tough question to ask Bo, but I gotta ask: Are cops racist?” When Bo responds, “No,” Klepper gets up to leave, saying, “That’s good enough for me.”

In another scene Wood and Keppler go to the Madison Wisconsin Police Department, one of the few departments with an anti-bias program, and undergo training in which they have to figure out the events that led up to a scenario they’ve been called to investigate. For example, in one scenario, a white woman is lying on the ground, surrounded by three people, one of whom is a black man. Pointing to the black man, Keppler surmises, “We have the rap star over here, who clearly hit this pregnant woman.” When the role players demonstrate what actually happened—a woman collapsed while walking with her friends, all of whom were trying to help her, and the black man is taking her pulse—Keppler asks, “Why is the black guy trying to kill the lady who’s having a heart attack?”

Noah has definitely brought a less US-centric perspective to the show. But that didn’t always translate into original or funny material. He summarized tensions between Russia and Ukraine by saying, “Putin was all like, ‘Dibs on Ukraine.’ And Obama was like, ‘Nu-uh.’”

Noah has been praised for a segment comparing Trump to African presidents, and while this was certainly informed by Noah’s South African perspective, it didn’t have political sophistication we’ve come to expect from The Daily Show. And at times it seemed like he was using his South African identity as license to make generalizing jokes about the entire continent of Africa.

While much of the crosscut montage between Trump and African leaders saying genuinely Trump-esque things worked, one particular point of comparison to Zimbabwe’s Robert Mugabe rang politically tone deaf. It started out fine, and showed the following:

Mugabe: My people have great praise for me.

Trump: People love me. Everybody loves me.

Mugabe: We will win. We will be winning all the time.

Trump: We may have so much winning all the time when I get elected, that you may get bored with winning.

But then the montage cut to Mugabe saying, “The land is ours. It’s not European. It’s our land. And we have taken it,” followed by Trump promising, “We’ll take our country back.” While Mugabe has done horrendous things to his country and hijacked the anti-imperialist movement for personal political and financial gain, what he and Trump are saying should be points of contrast and not comparison. They claim very different things and come from very different contexts. One is a black African extolling autonomy and challenging neocolonialism. Another is a white racist “American” vowing to take the country back from the criminal (and non-white) foreigners.

But there was one great moment where Noah was progressive—in both senses of the word—and spoke humorously from the heart. And it was the most interesting moment of the show so far. During his interview with Chris Christie, Noah brought his charm, affability, as well as his perspective as a South African in the United States to a political issue:

“I was watching the debates and you were talking about how people shouldn’t overstay their visas. I felt like you were talking to me personally. But what I didn’t understand was the biometrics. You want people to get FedEx stamps, or…?”

It was a moment that was funny (though not hilarious) but also made for an interesting interview and had some genuine personality. And there was potential for a real interesting discussion.

Unfortunately, Christie was able to dismiss the critique, telling Noah, “No, no, no. You already have 10 FedEx stamps.” Noah responded with a joke about how he was thinking of getting a tramp stamp, and turned so his (clothed) butt was facing Christie. “That wouldn’t be bad,” Christie replied. We’d seen just a glimmer of vulnerability and pathos and comedy in Noah’s question—and it was eclipsed by a tramp-stamp butt joke.