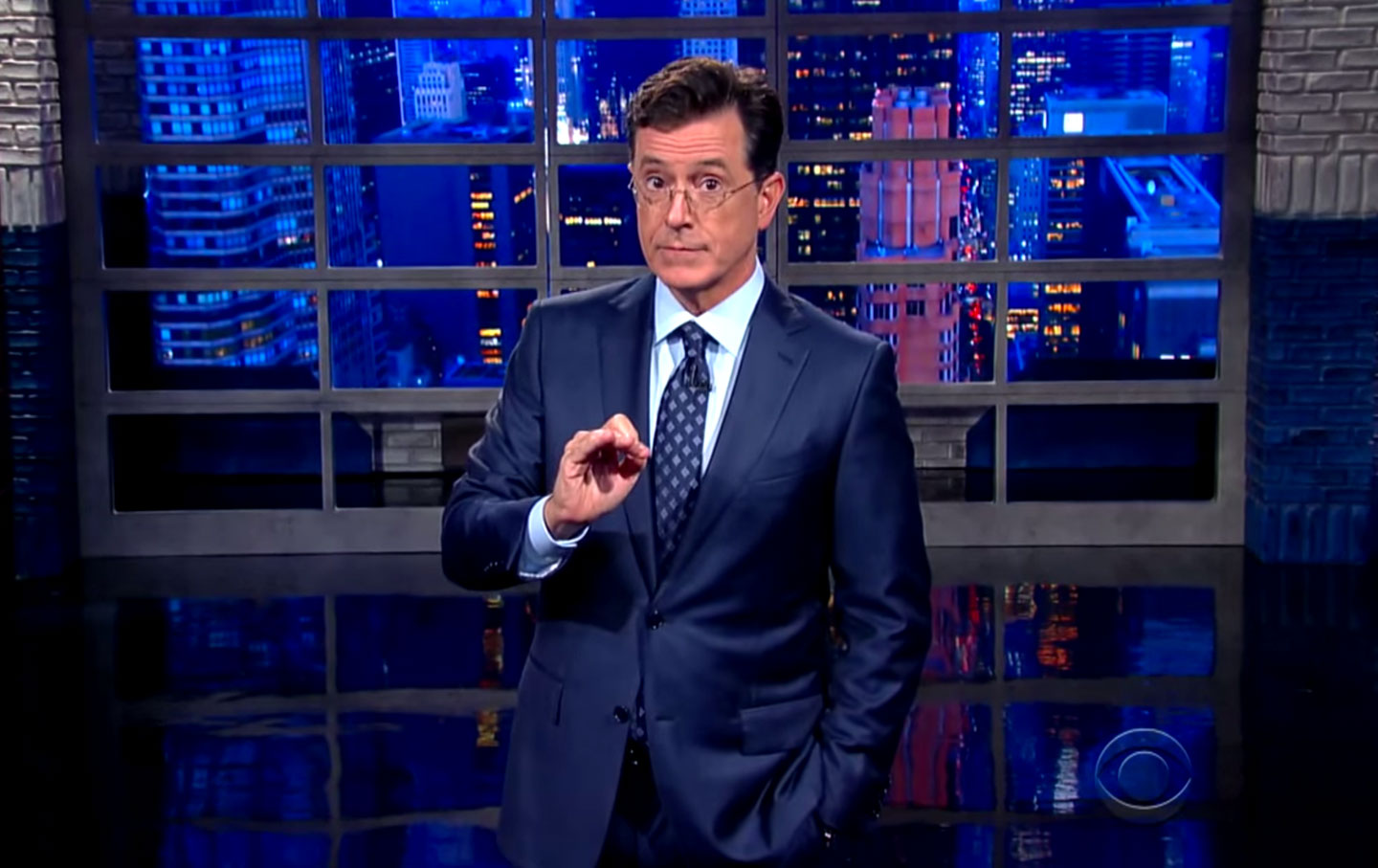 (The Late Show with Stephen Colbert)

It was a no-brainer that Stephen Colbert as The Late Show host would be less politically edgy or hard hitting than he was on The Colbert Report. After all, The Colbert Report was arguably the most relentlessly, fiercely political, and, dare I say, partisan (in a good way) television show ever. Because Colbert never broke character, nearly every sentence he uttered was a political statement in which he simultaneously mocked right-wing values, or lack thereof, and implicitly advanced his own humanism and progressive political orientation. As Colbert explained in his Late Show debut, “I used to play a narcissistic conservative pundit—now I’m just a narcissist.”

But it’s not just that he’s taken off the character mask. Colbert has gone from cable to a major network. Cable is always less restricting than network television, but on top of that, Comedy Central, a channel dedicated exclusively to, well, comedy, is especially irreverent. Strong political opinions aren’t as tolerated on network television, which is why NBC (the network) has MSNBC (the cable channel) and Fox (the network) has Fox News (the cable channel). (I’m in no way equating MSNBC and Fox News, by the way—Fox News is a lot further from the center and from the facts than its so-called liberal counterpart.)

So, given these limitations, how did Stephen Colbert as political critic fare this past week? As expected, the first week of the show revealed a more politically restrained Colbert, and even some clichéd bipartisan statements and gestures. But given the new context, he managed to keep the show’s politics fairly pointed. And maybe, just maybe, his more bipartisan tone will prove to be a strategic way for him to deliver his more politically daring messages. A girl can dream.

Already, the focus and overall content of Colbert’s Late Show has been far more political than that of other late night network talk shows, including David Letterman’s. Colbert’s guests for the first week included Jeb Bush and Joe Biden, and the guests for the second week include Supreme Court Justice Stephen Breyer, United Nations Secretary-General Ban Ki Moon, and Vermont Senator Bernie Sanders. While David Letterman did interview then–Vice President Al Gore during his second week hosting The Late Show in 1993, none of his other early guests were involved in politics. When Jay Leno took over The Tonight Show in 1992, his early guests were Billy Crystal, Emilio Estevez, and Christian Slater. When Jimmy Fallon replaced Leno in 2014, he had Michelle Obama on, and even asked her about the Affordable Care Act, but the rest of the interview steered clear of politics, while Fallon’s other first week guests—Will Smith, Jerry Seinfeld, Bradley Cooper, and Justin Timberlake—all fit the mold left by his predecessor.

But hosting politicians, judges and diplomats doesn’t make the show politically pointed, per se. For that we have to look at the interviews themselves, and the monologues.

The opening monologue of the first show had some familiar jabs at Republicans, most of which were safe, not that political and not that funny. Colbert teased the GOP for its sprawling field of candidates, describing Jeb Bush’s appearance on the show as “the rare TV appearance when he doesn’t have to share the stage with 16 other people.” He went after Trump: “[Jeb Bush] was governor of Florida for eight years and you would think that that much exposure to oranges and crazy people would have prepared him for Donald Trump. Evidently not.”

These jokes were generic and didn’t sound authentic to Colbert’s voice, even allowing for transformed persona. He sounded a little more himself when he expressed surprise over the support The Donald was getting from white-supremacist groups, given that “Trump’s not even white — he’s more Oompa Loompa–merican.”

But Colbert’s comedic voice and political perspective were more present in a segment when he went after the media, himself included, for its unhealthy addiction to Trump coverage: “Just like the rest of the media, I will be covering all the presidential candidates—who are Donald Trump.” Colbert then showed a clip of Trump criticizing Nabisco for shutting down an Oreo plant in Chicago and moving it to Mexico, forcing The Donald to vow, “I’ll never eat ’em again.” Colbert reflected, “I’m not surprised that Donald Trump is willing to stand up to Big Cookie. After all, he’s the only candidate brave enough to deport the Keebler Elves.” And then, in a Trumpish voice, said to an image of Keebler Elves, “Hey tree freaks, keep your filthy fudgy fingers off our jobs.” Colbert then tried, unsuccessfully, to resist the temptation to eat Oreos from a bag that appeared and, also unsuccessfully, to resist the temptation to watch more clips of Trump looking and sounding like an idiot.

In another episode, Colbert mentions a study about Trump’s popularity, conducted by “Republican pollster and child-who-wished-to-be-a-grown-up-on-a-cursed-carnival-machine, Frank Luntz”—a description he could have delivered in character on The Colbert Report. Colbert then cites one of the study’s participants, who said, “We know [Trump’s] goal is to make America great again. It’s on his hat.”

During his first interview on The Late Show, Colbert certainly didn’t skewer Jeb Bush the way he could have and maybe would have on The Colbert Report. As Emily Nussbaum writes, “Mostly, Bush got to spout off talking points, branding himself as a benign presence, who was, unlike Trump, a small-government conservative interested in ‘fiscal restraint.’ The two men joked about logos. It was aggressively collegial, a kick in the shins to anyone who worried that Colbert would be some liberal muckraker.” And Colbert has been criticized for being too soft during his interview with Travis Kalanick, CEO of the ethically challenged, free-market fundamentalist Uber corporation.

Yet Colbert managed to pack some punches in these interviews. He challenged some of Uber’s practices, saying, “You talk about how good this is for drivers. But you said you want self-driving Uber cars… That’s not for the driver. You’re employing robots at that point.” He also criticized Uber’s surge pricing for raising fare rates as much as four times the norm during last year’s hostage crisis in Sydney’s central banking district. “Is that how we should be treating each other?” he asked.

And Colbert was, according to several witnesses, extremely respectful towards protesters in the audience who interrupted the interview to criticize Uber. Though this was cut from the broadcast, one audience member tweeted:

Instead of having the men removed, Stephen acted with complete respect and control. He listened intently to what they had to say. When the guy finished, Stephen said that he was planning on asking a similar question, and politely asked the man to be seated. He then turned back to the interview and addressed exactly what the man had yelled about. It was very smooth.… Then five minutes later, another man got up and yelled something else. The Uber guy started to talk back to him, but Stephen calmly touched his arm and quieted both him and the cab driver in the balcony. He said that he would ask the man’s question “in a more respectful way.” Then he again respectfully asked the man to sit down, and he asked exactly what the man had yelled about.

The Bush interview wasn’t all softballs, either. In fact, it demonstrated another tactic that Colbert can use to disarm people—charm and good manners. In what Nussbaum describes as a “gentle ambush, which involved a staged interaction with his own brother, designed to elicit a genuine answer from Jeb,” Colbert pointed out his own brother Jay sitting in the audience and said, “You and I don’t agree politically, do we?” to which Jay responded, “No.” “And yet I love you!” replied Stephen. Then he turned back to Bush and said, “Now, I love my brother even though we politically differ. Without in any way diminishing your love for your brother, in what ways do you politically differ from your brother, George?”

Bush responded with a sound bite about how he would have been more fiscally conservative. It wasn’t a gotcha question, but it could have been. And Colbert managed to get a slight dig in when Jeb bragged that his budget cutting had earned him the nickname “Veto” Corleone. Colbert explained, “You know, he is an anti-hero in that movie.”

Colbert’s interview of Joe Biden was not particularly political, but rather a personal and moving conversation on tragic loss and resiliency, both of them having lost family members in accidents. But Colbert clearly loves Biden personally and politically, and he urged him to run for president towards the end of the interview. But then he added the disclaimer, “Not that there aren’t good people on both sides running.”

At first I was outraged. How could Colbert say that? What “fair and balanced” BS! He can’t honestly believe there are any good people on the Republican side. But… maybe he does believe they are good people, even if they are not good candidates. Or maybe after having talked about loss and tragedy, he thought it unseemly to be anything but gentle. Or maybe he really is trying to come off as center of the road. But if any of these things are true and they allow him to engage politically, to encourage candidates to enter a race, maybe that is the subversive strategy I was dreaming of.