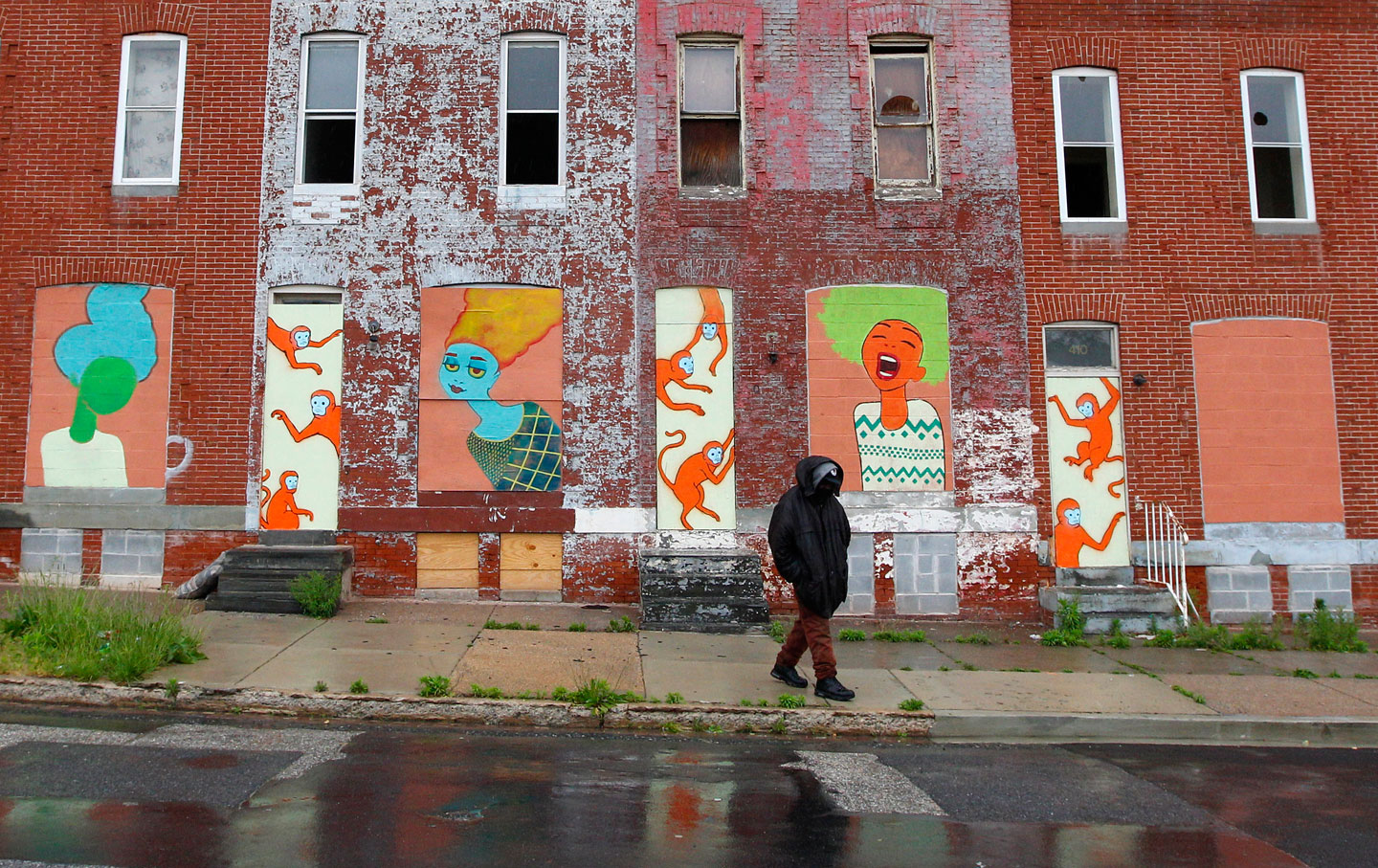 A man walks past a boarded-up row of houses in Baltimore, April 22, 2012. (AP Photo/Patrick Semansky)

Poverty and violence didn’t just randomly happen to this community. These issues are the result of a long history of systematic discrimination and abuse.… Given this history, we shouldn’t be surprised at the challenges that kids in Indian Country are facing today. And we should never forget that we played a role in this. Make no mistake about it—we own this. And we can’t just invest a million here and a million there, or come up with some five-year or ten-year plan and think we’re going to make a real impact. This is truly about nation-building, and it will require fresh thinking and a massive infusion of resources over generations. That’s right, not just years, but generations.
—Michelle Obama, April 8, 2015, White House Convening on Creating Opportunity for Native youth

America has a gargantuan racial wealth gap, and that gap impacts nearly all public policy issues affecting the New American Majority—an electoral bloc I define as made up of progressive people of color and progressive whites. (That’s 51 percent of all eligible voters.) The median wealth, or net worth, of a white family in 2013 was $134,000, while the median wealth for a black family was $11,000. Latino families have a net worth of $13,900, and Native American families have a net worth of $5,700. For Asian American families that amount is $91,440, and much of that is attributable to the fact that 74 percent of all Asian American adults are immigrants, with many of them coming from the professional class of their home countries.

With whites having such an overwhelming head start, it is nearly impossible for the groups of color to catch up. The historical average annual return on investments in the stock market is approximately 10 percent. If the average white family invested their $134,000 in net assets in the stock market and received that 10 percent annual return, and the average black family placed its $11,000 in investments that performed twice as well as the white family’s, the black family would still be behind even after 28 years of earning double on their investment.

This article is excerpted from Steve Phillips’ new book Brown is the New White: How a Demographic Revolution Has Created a New American Majority, due out February 2 via New Press.

Today’s racial wealth gap is a modern-day manifestation of the fact that America was built on land stolen from Native Americans and Mexicans and developed by the backbreaking labor of African Americans, Latinos, and Asian Americans. Given this reality, we all have to ask ourselves what is the right and just thing to do from a public policy standpoint to close this gap in a country that professes a belief in justice and equality. If progressives want to vastly improve the conditions in underserved and underdeveloped communities, capture the imagination of the New American Majority, and secure its lasting loyalty, then bigger and bolder policy solutions are required.

Which brings us back to the question, “What is justice?” One could persuasively—and logically—argue that justice in the context of the history and conduct of the United States would entail the following:

In 2014, Ta-Nehisi Coates wrote a seminal and eloquent article for the Atlantic titled “The Case for Reparations.” Coates highlights the fact that

[h]aving been enslaved for 250 years, black people were not left to their own devices [after the Civil War]. They were terrorized. In the Deep South, a second slavery ruled. In the North, legislatures, mayors, civic associations, banks, and citizens all colluded to pin black people into ghettos, where they were overcrowded, overcharged, and undereducated. Businesses discriminated against them, awarding them the worst jobs and the worst wages. Police brutalized them in the streets…. Now we have half-stepped away from our long centuries of despoilment, promising, “Never again.” But still we are haunted. It is as though we have run up a credit-card bill and, having pledged to charge no more, remain befuddled that the balance does not disappear. The effects of that balance, interest accruing daily, are all around us.

The Way to Win: Yes, People Will Vote For This Stuff

Championing economic justice is more than moral and just. It’s also the way to win elections. In a changing population where people of color are nearly 40 percent of the country and white allies and advocates of justice make up another quarter of the country’s population, speaking boldly and unapologetically to the causes of inequality has proven to be good and smart politics. Ironically, progressive leaders and influencers are doing exactly the wrong thing by going after small goals. Politics and policy are inextricably intertwined. People of color vote in lower numbers because many of them feel that most of the US public policy agenda has little relevance to their lives.

Grappling with the question “What is justice?” will not only be good for America’s soul; it can also move us closer to the kind of society whose deeds match its words. In the process, we can build popular support for a progressive public policy agenda that will honor the country’s highest and best values while also making a tangible and meaningful difference in the daily lives of the American people.

Attacking and forcibly removing Native Americans from America’s fertile fields, enslaving and economically exploiting Africans in America, launching war against Mexico so Texas could continue to practice slavery, encouraging Chinese immigration to build an economically valuable railroad but then explicitly excluding Chinese from becoming citizens, and racially restricting access to mortgage loans in economically expanding neighborhoods were not unfortunate aberrations carried out by a few rogue officials and bad actors, the likes of which we don’t see anymore. These were the official public policies of the United States of America.

Although justice has long been delayed, those who bore the brunt of those attacks now have the numbers to serve as the cornerstone of a New American Majority. With those numbers, with that majority, we have the opportunity—indeed the obligation—to make new public policies. Policies rooted in justice and dedicated to the proposition that all people are indeed created equal.