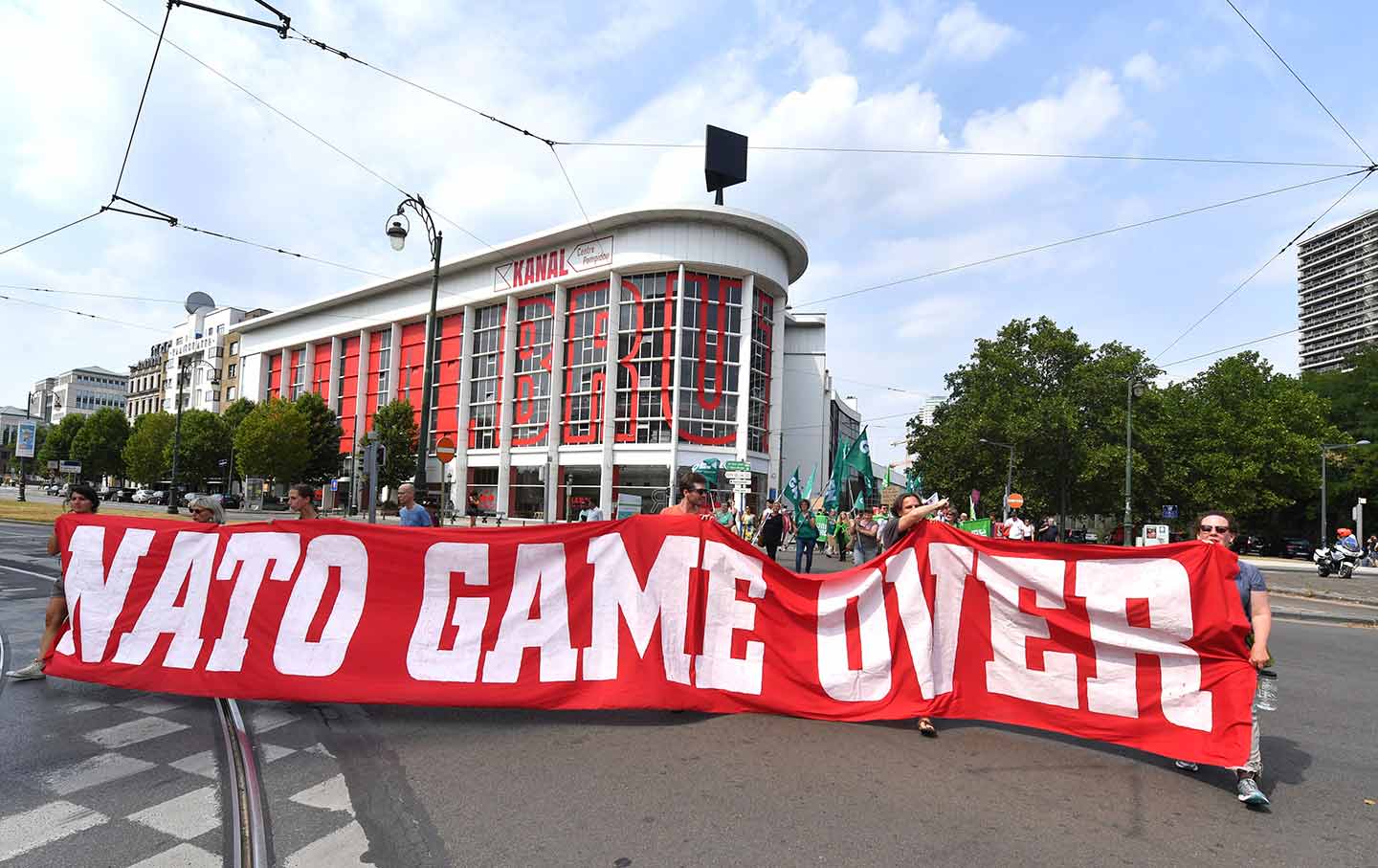 Protesters marched in Brussels on July 7 in anticipation of the NATO summit in Belgium. (AP / Geert Vanden Wijngaert)

NATO summits customarily amount to public-relations lovefests, in which sonorous communiqués declaring the vitality of the “Atlantic community” obscure what has become the increasingly dangerous moves of the US-dominated military pact. But President Trump, no surprise, promises to make this summit uncharacteristically uncomfortable and potentially rancorous. The issue for progressives is that, mostly inadvertently and largely for the wrong reasons, Trump will be disrupting an established pattern sorely in need of disruption and provoking hard questions about the justifications for and perils posed by NATO and the related dangerous course of US-Russia relations.

To grasp the issues at stake, we have to have to look at the history of NATO’s somewhat hidden purposes. In the mid-1950s, George Kennan and Walter Lippmann, two of America’s most profound foreign-policy critics, started to question the rationality of US foreign policy. By that time, they understood that the Red Army posed no real threat to Western Europe, and so they each proposed a mutual superpower disengagement from the continent. Kennan and Lippmann’s aims in Europe were limited and specific. Defining America’s interest there as preventing the continent’s military domination by a single power, they perceived American policy in strategic, rather than ideological or “world order” terms. The foreign-policy establishment was enraptured by the notion of a Pax Americana, but Kennan and Lippmann had a far more modest view of America’s future European—and global—role. They looked to the restoration of a plural world in which other powers—the major European states in particular—would dilute the nascent US-Soviet confrontation. Disengaging the United States and the Soviet Union from Europe and thereby restoring a multipolar balance of power would be, Kennan and Lippmann reasoned, in America’s long-term interest, for it would free the United States from its responsibilities for others’ security and would enormously reduce the potentially apocalyptic tensions between the superpowers.

But the foreign-policy community reacted to Kennan and Lippmann’s proposals with a vehemence that stunned them both. Revealingly, however, that opposition didn’t center on anxiety over the Soviet menace, real or illusory, but rather on the now-familiar concerns regarding the imperative of American “leadership” and the need for America’s “continuing engagement.” Kennan was forced to conclude that American statesmen “would not have considered the withdrawal of a single American battalion from Western Germany even if the Russians had been willing to evacuate all of Eastern Germany and Poland by way of compensation,” and he came to realize that US preponderance in Europe served aspirations unrelated to stanching a Soviet threat. By enmeshing the Western European states’ (and Japan’s) foreign and military policies in alliances that it dominated, the United States permanently stifled the emergence of new, truly independent great powers—a development that it defined, and still defines, as ipso facto inimical to its interests and to the US-“led” (read: controlled) global order. Obscured by all the lofty rhetoric about transatlantic “partnership” was and is a simple fact: US policy in Europe has aimed not to counter others’ bids for hegemony but to perpetuate America’s own supremacy.

Thus it’s not surprising that the US foreign-policy establishment hardly saw the end of the Cold War as an occasion to dissolve the US-dominated NATO. Nevertheless, since the alliance had always been sold to the American public as the necessary counter to the ostensible Soviet threat, the foreign-policy mandarins frantically searched for a new rationale to justify NATO’s continued existence. The solution, to use the slogan that was embraced for this purpose, was to forestall NATO from going “out of business” by having it go “out of area”—the alliance would take the states of Central and Eastern Europe and, soon enough, the states of the former Soviet Union under its military, political, and nuclear umbrella. 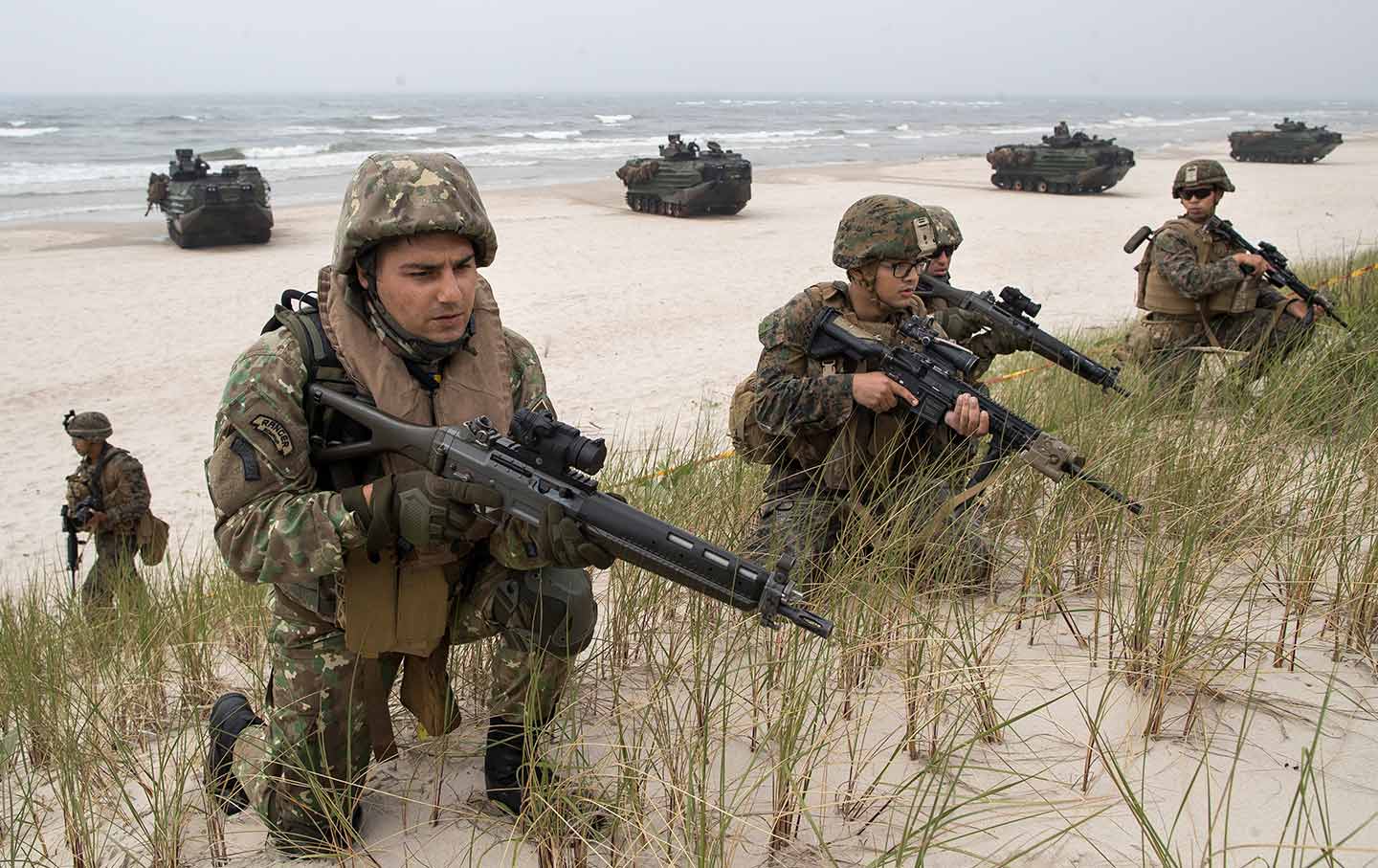 What Trump’s Critics Are Missing About the NATO Summit

The justification for NATO expansion was as dangerous and open-ended as it was flimsy: “There can be no lasting security at the center without security at the periphery,” Senator Richard Lugar, the leading Republican foreign-policy spokesman, intoned at the time. Not only did the United States cavalierly engorge its security (and in reality its nuclear) commitments, not only did it create ever-expanding frontiers of insecurity, but it seemingly forgot that Russia—a nuclear-armed great power that understandably resisted being absorbed into a global order on American terms—lay “at the periphery.” At the time, nearly every clear-headed observer warned that Washington, by pushing its military pact up to Russia’s borders—a move that it had previously promised Moscow it would not undertake—was fomenting a new Cold War. Kennan called NATO expansion “a strategic blunder of potentially epic proportions.” Every Russian leader since Gorbachev and the entire Russian political class have consistently held that NATO expansion is an aggressive and perilous encirclement. Of course they do: For nearly two centuries, the United States has invoked the Monroe Doctrine to insist that it will not tolerate a political alliance between any great power and any country in its near abroad, which it defines as stretching from the Canadian Arctic to Tierra del Fuego. Imagine how Americans would react if a triumphant Russia had absorbed Canada in the Warsaw Pact.

In the 21 years since NATO began pushing eastward, the American-led pact has penetrated ever deeper into Russia’s historical sphere of influence and even deep into the territory of the former Soviet Union. In addition to its 17-year holding action in Afghanistan, it has launched two aggressive wars aimed at regime change against countries (Yugoslavia and Libya) that, however unsavory, posed no threat whatsoever to any member of the alliance. The war against Yugoslavia, absent UN sanction, was directed against a traditional Russian ally. NATO’s leader, the United States, has developed such an advantage in its nuclear capabilities that some experts persuasively argue that it now possesses a dangerously provocative first-strike capability against Russia (those who swaggeringly talk of standing up to Moscow shouldn’t forget that nuclear-armed submarines of Russia and of America are always on patrol and that the nuclear forces of both countries are always poised to attack). NATO’s leader has also interfered in the pre-and post-coup political machinations in Ukraine—the religious heartland and a cultural and political wellspring of the Russian nation, and the most important former Republic shorn from the Soviet Union. NATO has signaled that its expansion into Ukraine is a question of when, not if.

And now that NATO has created an enemy, it justifies its intensifying provocative actions—the massive annual military exercises since 2010 in Poland, Lithuania, and, on Russia’s very doorstep, in Latvia and Estonia; the creation of a permanent US Army headquarters in Poland; a new Pentagon-devised plan for a prolonged war with Russia; the US ambassador to NATO’s explicit identification of “Russia and the malign activities of Russia” as NATO’s “major” target—by declaring that they are nothing more than a necessary reaction to Russian hostility and the need, as The New York Times editorial board declared this week, to “contain” the Russian “threat.” And what, according to the Pentagon’s 2018 National Defense Strategy, makes the Russians a threat? Nothing less than that their aim—which is as unproven as it would be understandable—is “to shatter” NATO, the military pact arrayed against them.

Given the perils that this swollen and aggressive alliance has created, the problem with the president’s fixation over the hoary issue of alliance burden-sharing isn’t that it’s disruptive, but that it’s not nearly disruptive enough—and is disruptive in all the wrong ways. Trump’s tantrum in Brussels actually boils down to a demand that this increasingly dangerous alliance enlarge its military spending. To demand that Europeans augment a US-dominated military pact that is only creating a threat to the continent, souring international relations, and fueling the bitterness, truculence, and paranoia that lurk in Eastern Europe is at best a hazardous waste of resources. NATO is now the colossal “strategic blunder” that Kennan correctly forecast it would become. The alliance hardly needs to be reformed. It has to be put out of business.