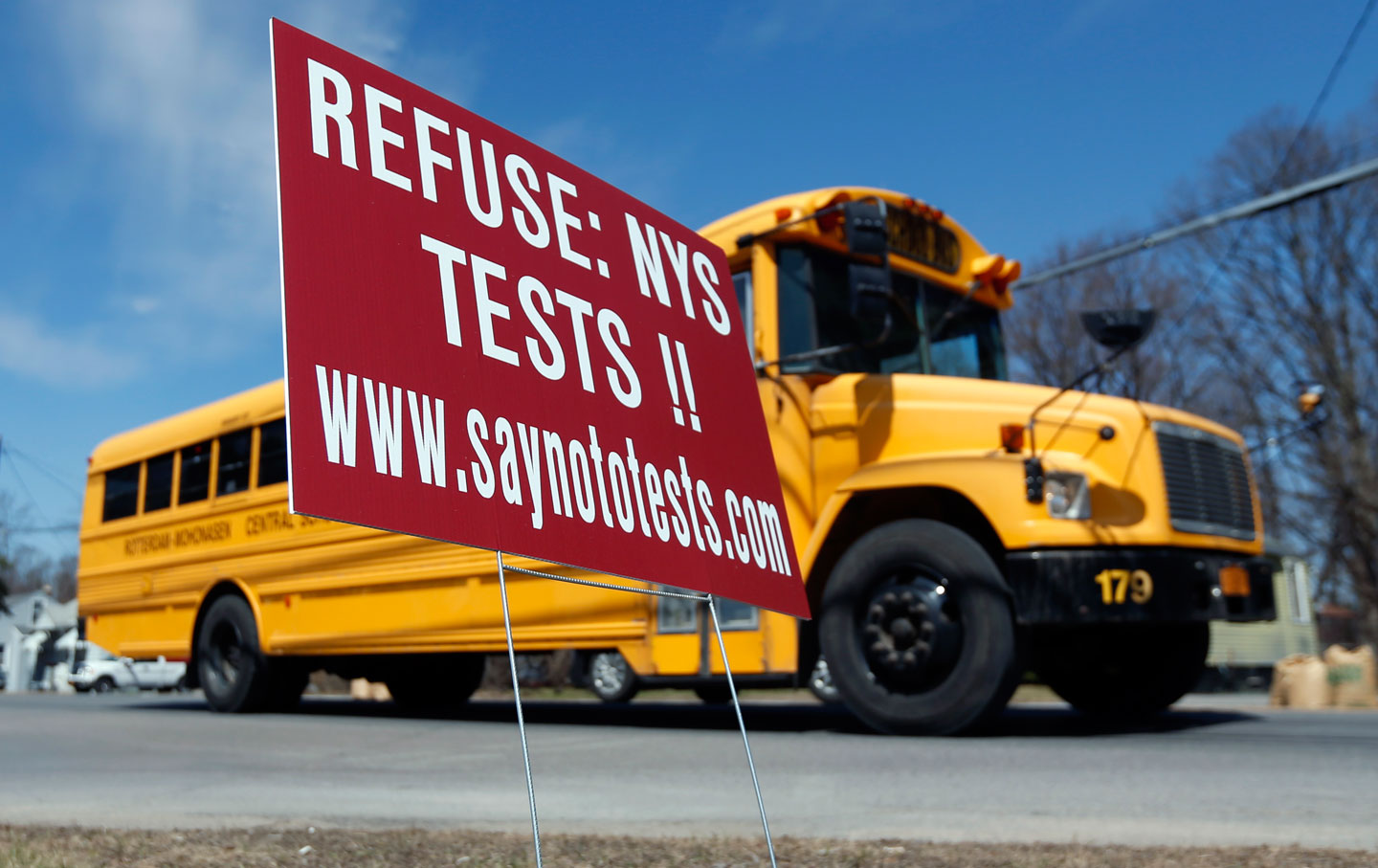 Opting out is in. Over the past two years, the movement to boycott standardized tests across New York State has mushroomed from a fringe rebellion to a mass mobilization against what many see as an anxiety-provoking, creativity-stifling, and hypercommercialized testing regime. With record numbers of opt-outs last year, however, activists are now testing the patience of education officials. State education Commissioner MaryEllen Elia has signaled stiff disapproval and dropped hints last month that the movement may suffer consequences for bucking the system.

More than 200,000 students were no-shows for at least one of the state’s English and math exams this year, according to a New York Times analysis of official data—a statewide figure that “quadrupled from the year before, and represented 20 percent of all those eligible to be tested.”

Driving the movement is a national network of teachers and families providing encouragement, along with form letters and legal guidance on how parents and kids can exercise their right to reject the test. But recently Elia stated that school districts might be sanctioned somehow if a large portion of students boycotted the tests. According to Politico New York, Elia suggested she would be consulting with superintendents about the impact of high opt-out rates, and “it’s also possible that federal Title I funds will be withheld.”

Although the standardized tests at issue, for English and math skills in grades three through eight, are essentially voluntary, administrators are required to offer them. Moreover, some federal funds are in theory contingent on achieving near-total participation rates.

Yet as opt-out campaigns have emerged in communities around the country, parents seem increasingly confident in their right to noncompliance. Officials and education authorities have largely refrained from intervening. Some, such as Delaware and Colorado, have even developed policies either promoting reduced use of tests or clarifying parents’ right to reject them.

Elia is leaning in the other direction. She explained to Politico she was currently assembling a legal “tool kit” to help superintendents “communicate in a much more effective way to people across the state,” presumably to equip administrators to pressure students while avoiding liability for outright threats.

But after several weeks of public criticism and confusion, state education officials announced that there would not be any loss of Title I school funding. They did not rule out the possibility in the future, and federal officials are reportedly still considering whether to intervene.

Jia Lee, a New York City-based special education teacher with the Movement of Rank-and-file Educators caucus of the teachers union (MORE-UFT), sees political designs in Elia’s warnings. She is “in essence implying by her threats,” Lee says via e-mail, that parents’ choice to opt out “will have negative consequences for schools. More specifically, poor children of color are the targets. Since Title I schools are disproportionately Black and Latino.” Ironically, many of the communities with the highest opt-out prevalence, including several suburban Long Island districts, were mostly white and relatively affluent. So if funding consequences were imposed, wealthier high opt-out communities might suffer little in any case, while communities of color would have more to lose for opting out.

But the impacts of the testing obsession arguably hit children of color the hardest. And families of color in struggling schools have more at stake in both taking the exam and rejecting it en masse. Anti-testing activists have emphasized the connection between test-and-punish school reform measures, school closures in communities of color, and the disciplinary policies driving the so-called “school to prison pipeline.”

“There’s a lot of big money being made on the backs of our children.”

Following Elia’s comments a coalition of parent-activists and teachers issued a statement renewing their call for an end to test-driven education: “High stakes testing has only had horrible consequences for schools with disproportionate number of Black and Latino students,” stated Charmaine Dixon, parent of a rising fourth grader at a Brooklyn primary school. “We opt out for justice.”

Although individual opt-out students might escape punishment, the exams are not inconsequential. The results feed into the development of standards and programs such as the Common Core, which serve as benchmarks for evaluating students; the data is also central to teacher assessment. Reforms passed earlier this year in New York weight professional evaluations even more heavily on test results. But mass opt-outs might upend the process if there are not enough data collected to draw any meaningful analysis or district-wide comparison of trends in scores.

That’s okay by many teachers. Progressive educators and teachers unions have rallied around opt-out in their increasingly militant resistance to corporate-style education reforms: anti-testing civil disobedience is a symbolic challenge to the ideology of “accountability”-based school policies, from rigid curriculum mandates to expansion of charter schools.

Elia, meanwhile, has used opt-out as an invitation to criticize insubordinate teachers; she has zealously touted the need for tough, test-driven evaluations, though promised to ensure they are fair to teachers. Speaking at an Educators 4 Excellence conference last month, she dismissed the teachers who are driving the campaign: “I am absolutely shocked if…any educator supported and encouraged opt outs,” she told the audience of teachers. “I think it’s unethical.”

But her recriminations might reveal more about her political role than about the true value of the exams; the opt-out explosion threatens to deprive the testing machine of the data it relies on to validate and legitimize its existence. The chief consequence of opt-out, in fact, is that massive noncompliance in school communities expose the hollowness of the testing system.

According to Westchester opt-out activist and school librarian Susan Polos, “Last year some administrators were heavy-handed with parents, and some parents were intimidated and afraid of consequences for their schools.” But now they may see the pressure as a provocation: “I would think that seeing the results of the tests and how they are being used will strengthen the resolve of those who already opted out and increase the numbers but it looks like this will be a battle. There’s a lot of big money being made on the backs of our children.”

That’s the real political calculation behind the tests. They don’t assess skills or teacher “effectiveness” so much as they measure conformity and the establishment’s power. Students, families, and educators are learning fast that whatever they put on the answer sheet, it all adds up to zero.

[Updated with the latest August figures for state tests]