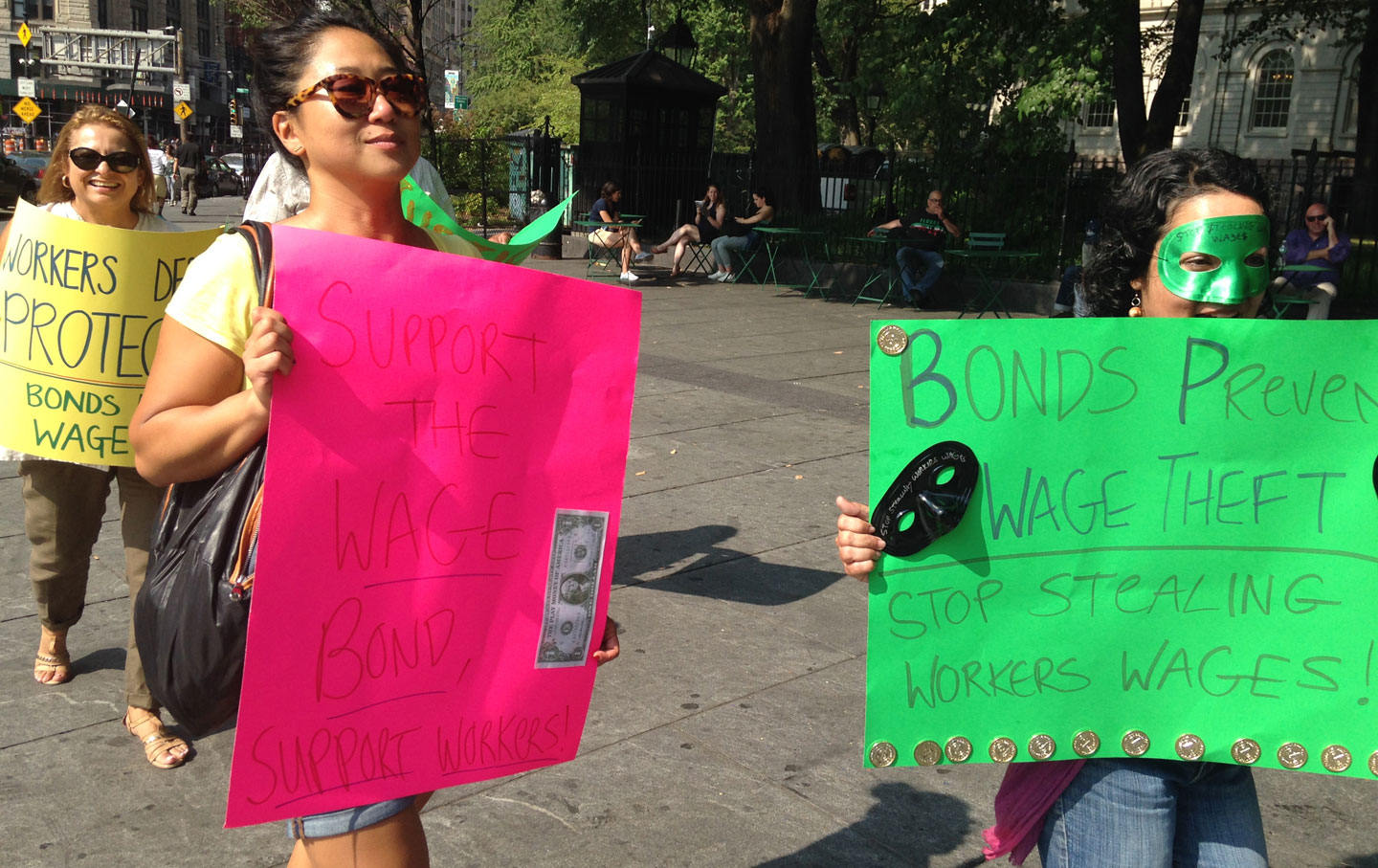 As New Yorkers relish summer’s end, stylish ladies will seek pedicures for sandal-ready feet, but their seasonal indulgence will be shadowed by a statewide crackdown on the nail salon industry’s ugly labor practices.

As we’ve reported before, The New York Times’s investigative series has shed a scandalous light on this ubiquitous but under-regulated sector. Thousands of workers, predominantly Asian and Latina immigrant women, are exposed daily to massive labor abuses and coercive treatment. In the following weeks, Albany passed a law requiring owners to pay a wage bond to safeguard workers against the risk of labor violations. For a salon that employs two to five nail technicians, the boss would purchase a bond worth at least $25,000, and at least $75,000 for a shop with a staff of a dozen manicurists.

According to Capital New York, wage-bond agencies will typically charge the employer only about 1 to 10 percent of the bond’s total value up front.

The idea is to get employers to front some of the cost of low-wage labor. If the worker in the future complains of wage theft and wins her case, but the employer doesn’t pay up, the state can tap the bond as an alternative source of compensation (the sum is later recovered by the bond company). The system has been used before to beef up regulatory enforcement in the carwash and construction industries.

The bond system is part of an array of labor initiatives advanced by Governor Andrew Cuomo, accompanied by a statewide task force focused on improving conditions in low-wage precarious industries, like construction and retail. The Task Force will work with an advisory board with representatives from several unions, community groups, and business representatives.

Though nail salons certainly are not the only exploitative low-wage industry in New York, the labor issues have touched a public nerve, perhaps because the workers perform such a symbolic ritual of commodified femininity, in which exploitation ties into pressure to be docile and seamless. That may mean no personal protective gear, despite the poisonous substances they handle; no lunch breaks, since it’s bad form to keep a customer waiting; no speaking unless asked.

The wage bond won’t resolve the issue of workers’ being paid poverty wages, but it does tighten standards in an industry wracked with gender and racial oppression.

Placed in the context of the massive insecurity the workers must bear as a cost of their job, the bond, as one piece of the cost of doing business, is chump change compared to the cost of wage theft, which robs each low-wage laborer of upwards of $2,600 annually, by some estimates. Besides, salon owners already invest in hefty regulatory expenses, including workers’ compensation and professional liability insurance—all part of the cost of doing business in one of the world’s profitable markets.

Compare that to the kind of cost burden that workers may have to “front” just for a shot at a decent livelihood. There’s the real estate: an illegally overcrowded Flushing studio. The start-up overhead: fronting $100 for the privilege of an “apprenticeship” followed by months of working for $3 an hour, 10 to 12 hours a day. The system is repeated each time she needs to learn a new skill—another $100 to learn how to wax eyebrows, for example. Spill a bottle of nail polish, wages get docked. You don’t see that tip from a regular client until the boss skims her cut. If she’s scraping by only on tips, she carries the ingrained economic burden of constant financial insecurity. There’s a race tax—you’re systematically paid less if you’re Nepalese, say, instead of Korean. Seasonal matching outfits for staff cost a chunk of a week’s wages. Often the steepest price is paid not in cash but in the flesh; if she’s undocumented, she likely has little to no access to health insurance, so she might pay out of pocket for the medicine she needs for the breathing problems caused by the noxious fumes at work. As salon worker Goma Garune testified at a recent City Council hearing on the industry’s labor conditions: “When we use masks and gloves our customers don’t like it. They think we’re sick, and our bosses also don’t like it. Also, we heard that there is paid sick leave, but we are not getting it.”

But that’s fair play in the city’s dog-eat-dog service economy. As Sarah Maslin Nir reported, from the boss’s perspective: “Fees extracted from new workers… are proper compensation for the inconvenience of providing training.… Several owners said they felt betrayed when their workers quit or sued.”

Employers have retooled that message in their campaign against the wage bond: They accuse Cuomo of “making [the] nail salon industry the only industry after construction and mining to be mandated to purchase such expensive insurance…. Seriously, how many bad apples are we talking about here? Please stop using us as scapegoats for your political gain.”

But according to Rachel Spector, an attorney with New York Lawyers for Public Interest, the bond is triggered only by an actual legal judgement obtained in court or through the Labor Department, and only if the company fails to pay outright, “either because it refuses to and is able to evade collection efforts, or because the business closes down.” Moreover, workers “are likely to be owed amounts above the coverage mandated in New York, so the bonds are not likely to cover full amounts owed.”

The bond only addresses non-payment of penalties; salon workers still face massive barriers in formally pursuing damages. Many reportedly aren’t even properly classified as employees, as bosses deliberately misclassify them as independent contractors to circumvent wage and hour standards. And even with the new task force, labor regulation generally suffers from weak standards, such as a minimum wage that an average New Yorker would go hungry on.

After factoring in all the hidden overhead costs of racism, sexism, environmental threats, and economic instability that workers “pay” to underwrite their employer’s fast profits, the wage bond doesn’t seem so unreasonable after all. Not in exchange for the bonded labor that these women are locked into, enforced by the premium of their silence.