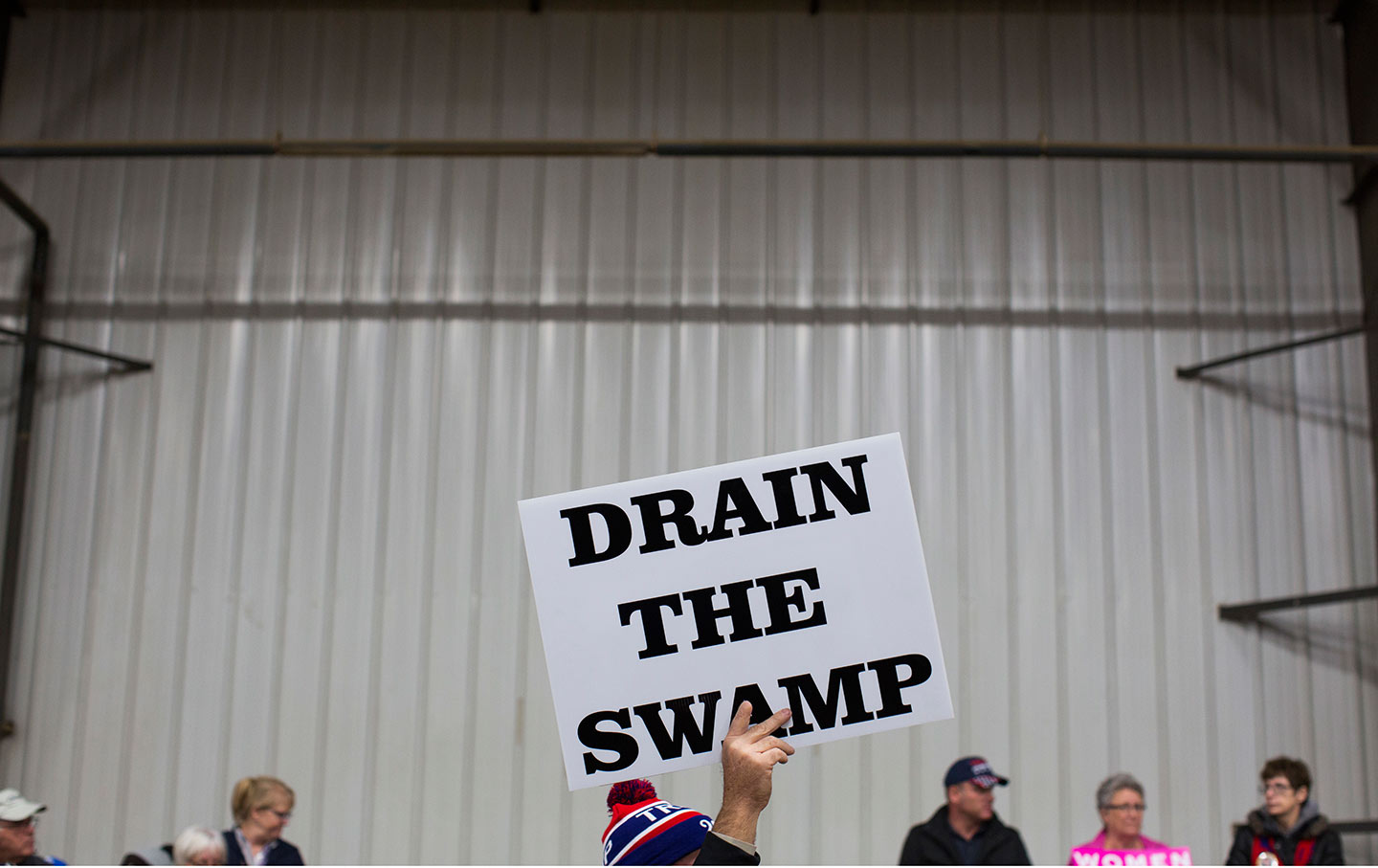 A Donald Trump supporter holds a sign during a campaign rally in Springfield, Ohio, on October 27, 2016. (AP Photo / Evan Vucci)

New York, NY—June 21, 2017—Voter suppression. Health-care repeal. A planet in crisis. President Trump. For progressives, there are countless reasons to fight back. So many, in fact, that it’s become a full-time job to figure out the most effective ways to resist the new normal. The Nation, America’s leading source of progressive politics and culture, is here to help: We do the research. You take action.

This week, we’re launching “Take Action Now” (@NationAction)—a weekly online e-mail initiative that curates opportunities for activism on a sliding scale of time commitment and investment. Released every Tuesday, “Take Action Now” directs progressive energy towards meaningful action with a digestible e-mail resource of the great activism and organizing taking place around the country. Whether subscribers have five minutes or five hours to devote to a cause, The Nation is here to help our community navigate the politics of protest. Sign up here.

“Founded by abolitionists at the end of the Civil War, The Nation has long been a publication of resistance—believing that movements have the capacity to bring about a more democratic and equitable world,” explains Editor in Chief and Publisher Katrina vanden Heuvel. “Our proud legacy is proof positive that we’ve been on the right side of history in some of the greatest debates roiling our country and our world.”

In late 2013, recognizing a need from our engaged and highly politicized readers, The Nation launched “Take Action”—an activism program that directs subscribers to act on timely, critical issues, frequently with partner organizations we trust. In a few short years, that community ballooned to over 400,000 subscribers; since the election of Donald Trump, the growth rate of our “Take Action” list quadrupled. Hundreds of thousands of Nation readers have signed petitions, called their representatives, and taken to the streets to raise awareness of diverse issues ranging from net neutrality to voter suppression to global warming to immigrant rights.

“Take Action Now” is the natural continuation of these efforts. It’s for readers looking to get involved but unsure of where to start. Curated by Nation editors to make the biggest impact in the fight for social justice, “Take Action Now” offers three meaningful options each week that amplify and nurture the resistance: one that takes a few minutes, one that takes a few hours, and one that involves a deeper commitment. Subscribers can pick and choose so that they’ll always have a way to get involved, no matter their schedule.

“After the election of Donald Trump, we knew that The Nation could play an integral role in opposing the Republicans’ reckless and cynical agenda,” says Digital-Communications Manager Sarah Arnold. “With our robust list of readers eager to act, unique position as a magazine of conviction, and connections to organizations at the forefront of the resistance, we spent the months after the election thinking about how to be most useful to our community. From the beginning, we knew two things: We wanted to point our readers to concrete offline action, and we hoped to bring clarity to which opportunities were most in need of their attention.”

The Nation does not expect anyone’s involvement in the resistance to end at what they find in their “Take Action Now” alerts, but we hope this resource will help users connect to the vital work being done every day by movements we deeply respect—celebrating the people and institutions we admire and whose work we hope to lift up.

Founded by abolitionists in 1865, The Nation has chronicled the breadth and depth of American political and cultural life from the debut of the telegraph to the rise of Twitter, serving as a critical, independent voice in American journalism and a platform for investigative reporting and spirited debate on issues of import to the progressive community. Through changing times and fashions, The Nation and TheNation.com offer consistently informed and inspired reporting and analysis of breaking news, politics, social issues and the arts—never faltering in our editorial commitment to what Nation Publisher Emeritus Victor Navasky has called “a dissenting, independent, trouble-making, idea-launching journal of critical opinion.”