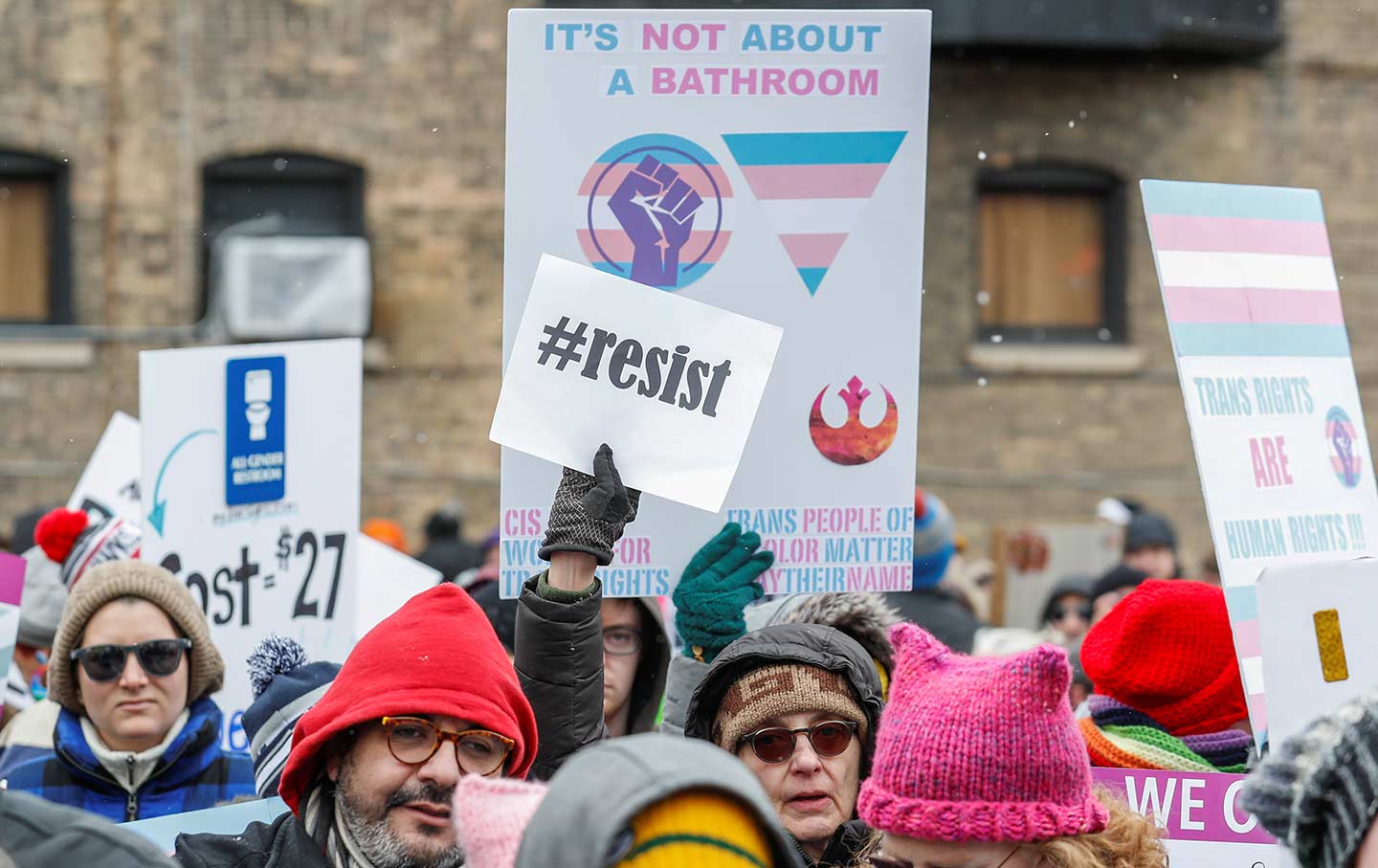 Demonstrators hold signs during the “Stand Up for Transgender Rights” event to show their support for transgender equality in Chicago, Illinois, February 25, 2017. (Reuters / Kamil Krzacznski)

Segregated schools were outlawed long ago, so why are trans students still shut out of the bathroom? And why, if sex discrimination is illegal, are workers fired because their spouses are the “wrong” gender? The language of the Constitution in many cases fails to contemplate gay, trans, and queer identities, and rights advocates say an update is way overdue.1

So a much-needed addendum to the landmark 1964 Civil Rights Act has been reintroduced in Congress, providing explicit protections against discrimination on the basis of gender identity and sexual orientation, in line with the framework that has applied to categories of sex and race for decades.2

The Equality Act would leave no ambiguity that the fundamental foundation of equality under the Constitution applies equally to LGBTQ communities as it does to women, people of color, immigrants, and religious groups. Moreover, the legislation would amend the existing 1995 Religious Freedom Restoration Act, which rolled back civil-rights mandates for individuals and institutions claiming religiously based exemptions, so that the new law could prevent religion from being used as a pretext for discrimination “on the basis of sex, sexual orientation, or gender identity.” While the RFRA remains on the books, the Equality Act would at least shift the burden of proof onto the employer or institution claiming a religious exemption rather than on the individual to prove they’re entitled to full constitutional protection.3

The amendment would effectively change the Civil Rights Act, along with the Fair Housing Act, the Equal Credit Opportunity Act, the Jury Selection and Services Act, and other anti-discrimination laws related to public-sector employment and access to public facilities, to cover “sexual orientation and gender identity as protected characteristics.” It would officially expand protections for public spaces and ensure equal access to federally funded programs, including health and social benefits.4

It would both simplify and complicate our current legal crisis surrounding the rights of, for example, trans teens shut out of the locker room that fits their gender, or same-sex couples barred from insurance coverage, under an administration that has shown unprecedented hostility to the idea of equal justice.5

The struggle for equal protection is more acute than ever because Trump has just signed a major executive order on “religious freedom” aimed at expanding the power of the religious right to influence federal politics. A more sweeping leaked draft version that The Nation published earlier this year had aimed to grant broad legal exemptions for legal and workplace discrimination under the pretext of acting on religious belief. Though the version signed by Trump today does not include those most severely discriminatory provisions, it would enable religious institutions to participate more directly in electoral campaigns, potentially opening the path to further rollbacks on LGBTQ rights, driven by religious hard-liners fueling Trump’s Christian, right-wing support base.6

The Equality Act would not, of course, remedy the worst violations that disproportionately impact the poor, people of color, and youth and the elderly within the LGBTQ community. It would, however, provide basic legal recourse for the estimated half of LGBTQ individuals who reside in states without any civil-rights protections that include their gender or sexual identity categories.7

So in most states it’s often perfectly legal to get fired for insisting that your boss identify you by the right gender at work, or facing unequal access to medical care for a gender transition, or being denied equal rights as a married couple or adoptive parents in a same-sex relationship. For youth facing abuse at school, only 14 states protect their rights explicitly in the education system. Trump’s anticipated executive order, if fully implemented, would pose an even more direct threat to the hard-won but limited rights LGBTQ communities have fought for through civil litigation and public advocacy.9

The act would also underscore the ongoing legal resistance to discrimination laws and practices targeting the LGBTQ community. While the courts have in recent years upheld LGBTQ protections under existing laws—most recently with a landmark Appeals Court ruling affirming that anti-LGBTQ workplace discrimination against an Illinois college professor is a form of sex discrimination under federal law—Lambda Legal says it is “ready to take the fight to the courts” for further legal challenges to Trump’s “religious refusal” decree.10

According to Sharon McGowan, director of strategy with Lambda Legal’s DC office, the Equality Act, previous versions of which have won bipartisan support, “makes clear that Congress agrees that these terms should really be understood as just a subset of what sex discrimination already covers.”11

While Trump purports to champion a silent majority of cultural conservatives, the Equality Act articulates what rights advocates see as a generational culture shift toward embracing LGBTQ identities. That, McGowan argues, is undeniable, regardless of Washington’s current political clashes:12

To stand in the way of this clarification and development in the law is symptomatic of the fact that there is a small, really ideologically driven group of people who are getting in the way of progress that this country as a whole is squarely behind.13

While other marginalized groups, including women, Muslims, and immigrants, have been more blatantly targeted through Trump’s demonizing rhetoric, McGowan warns that the Trump administration is imposing a kind of “death by a thousand cuts” through subtler policy changes—for example, cutting back on demographic data collection for LGBTQ groups. So rights advocates seek to affirm both within and outside the LGBTQ community that defending their rights remains as crucial as ever to defending the basic tenets of equal protection. While bracing for an attack parallel to those Trump has waged against other marginalized groups, McGowan warns that activists need to affirm their allies and know their common enemy.14

Whether or not the legislation advances, “now more than ever it’s important for those who stand on the side of equality to plant the flag, to make sure that everybody knows who’s on the side of this issue,” McGowan says, and in Washington and beyond, “keep up the conversation about…how the values that are embodied in the Equality Act are really who we are as a country and not what we hear coming out of the White House.”15