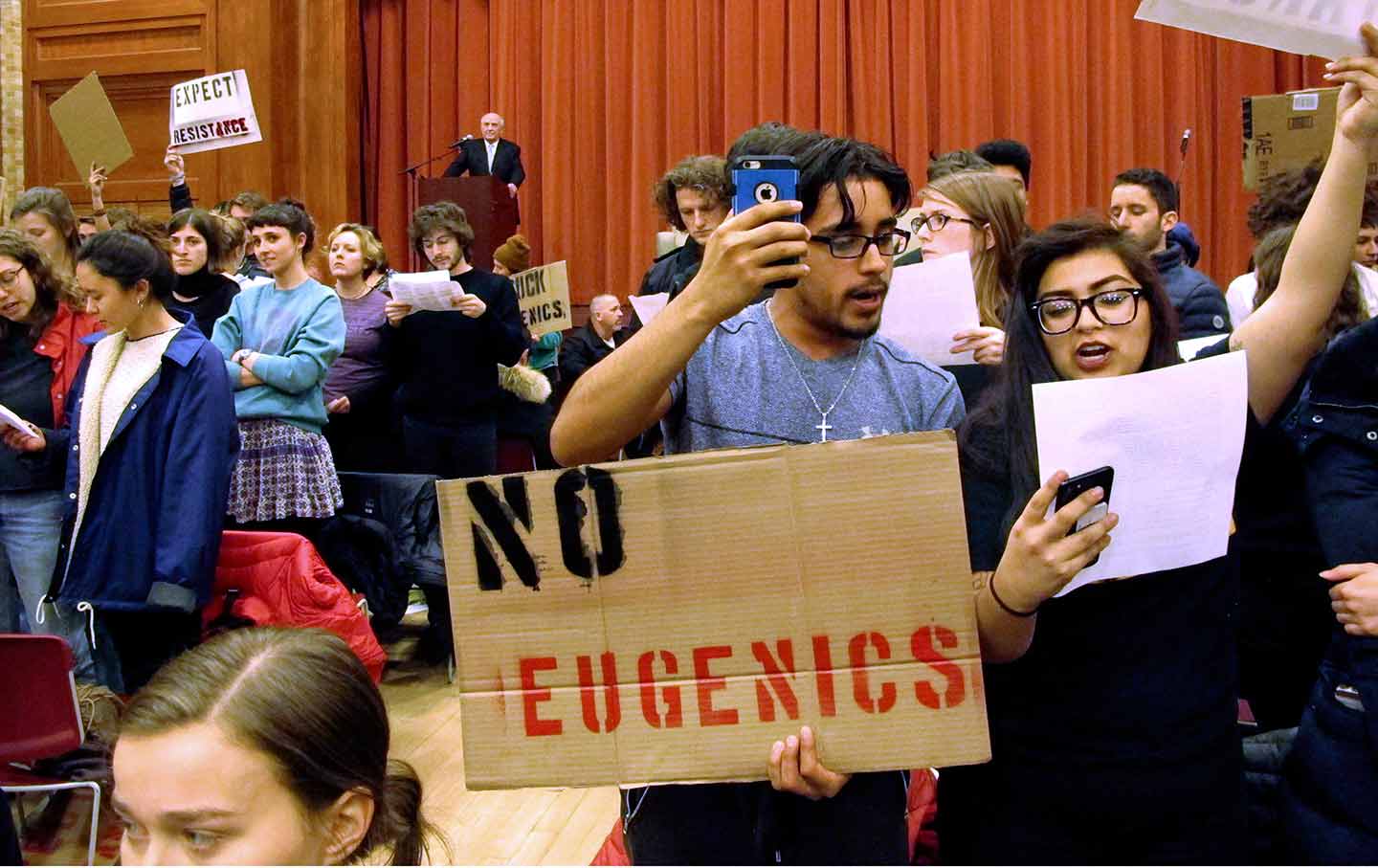 On March 2, student protesters at Middlebury College shouted down a conservative speaker, Charles Murray. “Your message is hatred,” they chanted. The American Enterprise Club, the student group that invited Murray, structured the event as a debate, asking Allison Stanger, a progressive professor, to respond. When she implored the crowd to let him speak and let her challenge his views, they shouted her down as well. When Murray and Stanger tried to leave the room, a group mobbed them. Someone injured Stanger when she sought to protect Murray.1

Whatever one’s views of Murray—I don’t agree with him on many grounds—the students’ actions recalled the mob violence across the South that I saw as a young man in the civil-rights movement working for Martin Luther King Jr.’s organization, the Southern Christian Leadership Conference. I thought of King’s 1967 speech, “Where Do We Go from Here?” “Through violence you may murder a hater, but you can’t murder hate,” he said.2

The protests illustrate a counterproductive model of change-making learned from an earlier generation of activists.

The students’ actions, like those at other campuses in recent months, show that intolerance for diverse views is growing in higher education. But the protests also illustrate the Manichean model of change-making that students have unfortunately learned from an earlier generation of activists—my generation: find an enemy to demonize, use a script that defines the issue in good-versus-evil terms, inflames emotion, and shuts down critical thought, and convey the idea that those championing the victims will come to the rescue.3

It’s a counterproductive strategy. But there is a different kind of politics, one that teaches ways to achieve change that engage others of different views and interests. It has proven successful on local levels and occasionally (as in the 2008 Obama campaign) on larger levels. The philosophy of nonviolence can enhance its moral, spiritual, and public power.4

The Manichean formula for change-making was developed in 1974 by the environmental group Citizens for a Better Environment, who focused their actions on what is called the canvass. The canvass involves paid staff going door to door to promote support for an issue, to raise money, and to collect signatures. Over the past four decades many canvass operations have developed, including the Public Interest Research Group network on college campuses.5

I defended the canvass method in Citizen Action and the New American Populism, a book I published in 1986 with Steve Max and Heather Booth, founder of the Midwest Academy training center, which became the central hub for spreading the method. We felt urgency in the face of massive mobilization by corporate interests to roll back environmental, consumer, affirmative-action, progressive-tax, and other legislation in the early 1970s and saw the canvass as a way to fight back. It found some success on environmental and other issues, even during the Reagan presidency.6

The scale was vast. Canvass-based organizing reached at least 12 million households per year in the mid-’80s. In “A Tale of Two Playgrounds,” a paper I delivered at the American Political Science Association annual conference 15 years later, I estimated that at least 3.5 million young people had spent time going door to door.7

In the interim, however, I had come to be concerned about an unintended consequence: its Manichean model of framing political conflicts polarizes public life, unravels the bonds of common citizenship, and doesn’t create a broad majority base for significant change. It suggests that politics are necessarily violent and warlike. This model has also spread far beyond the canvass to include robo-calls, Internet mobilizations, television ads, documentaries in the vein of Michael Moore, and the “axis of evil” framework used by Karl Rove in the aftermath of September 11. The approach, in other words, is used by both right and the left. As Elizabeth Williamson explained a few years ago in The Wall Street Journal, Saul Alinsky’s Rules for Radicals, a primer for Manichean politics, is used by Tea Party activists as well as progressives.8

The digital revolution could expand Manichean thinking exponentially. As nine authors observe in a recent Scientific American article, “Will Democracy Survive Big Data and Artificial Intelligence?,” new technologies worsen polarization, “resulting in the formation of separate groups that no longer understand each other and find themselves increasingly at conflict with one another.”9

There are alternatives. For instance, I founded Public Achievement, a youth civic-education initiative, in 1990 to counter the Manichean model through an empowering model of “citizen politics,” which emphasized teaching skills for working across differences. Public Achievement has since spread to many communities and schools and a number of foreign countries. Public Achievement draws on parallel grassroots efforts such as cross-partisan strands of community organizing that empower poor and middle-income people, public deliberations, and local examples of democratic, participatory governance.10

All these efforts help constitute a citizen-centered politics in which citizens develop agency and capacities for collaborative, cross-partisan action. The challenge is taking such efforts to scale, the possibility of which was suggested both by Barack Obama’s 2008 presidential campaign, which incorporated significant organizing dimensions, and the Minnesotans United for All Families effort to defeat a constitutional amendment in 2012, which would have incorporated a ban on gay marriage into the state constitution. Both used relational, narrative, organizing, and non-demonizing approaches.11

To build on this history, we should recognize that Martin Luther King’s understanding of nonviolence as neither pacifism nor simply a tactic has vast potential to help give citizenship and citizen action renewed depth and power, at just the moment when we need it most.12

Middlebury: Who Pays for Free Speech?

What Might Mario Savio Have Said About the Milo Protest at Berkeley?

“Power without love is reckless and abusive and love without power is sentimental and anemic,” King argued in 1967. The form of nonviolence includes spiritual, psychological, and moral disciplines: nonviolence as struggle, not inaction; seeking to understand opponents, not to defeat or humiliate them; making distinctions between evil actions and the persons who commit those actions; neighborly concern for others, whether friend or enemy—a public love which recognizes everyone’s need for belonging in the human family; and focusing first on changing oneself by refraining from hatred. “Hate…corrodes the personality and eats away at its vital unity,” King wrote. “The nonviolent approach…first does something to the hearts and souls of those committed to it. It gives them new self-respect. It calls up resources of strength and courage they did not know they had.”13

King’s form of nonviolence meets bigotry with discipline and dignity, not demonization.14

Young people—and people of all ages—are eager for a way to engage in politics that goes beyond the increasingly dysfunctional Manichean model. Developing an ethos of nonviolent citizenship is a good way to start.15