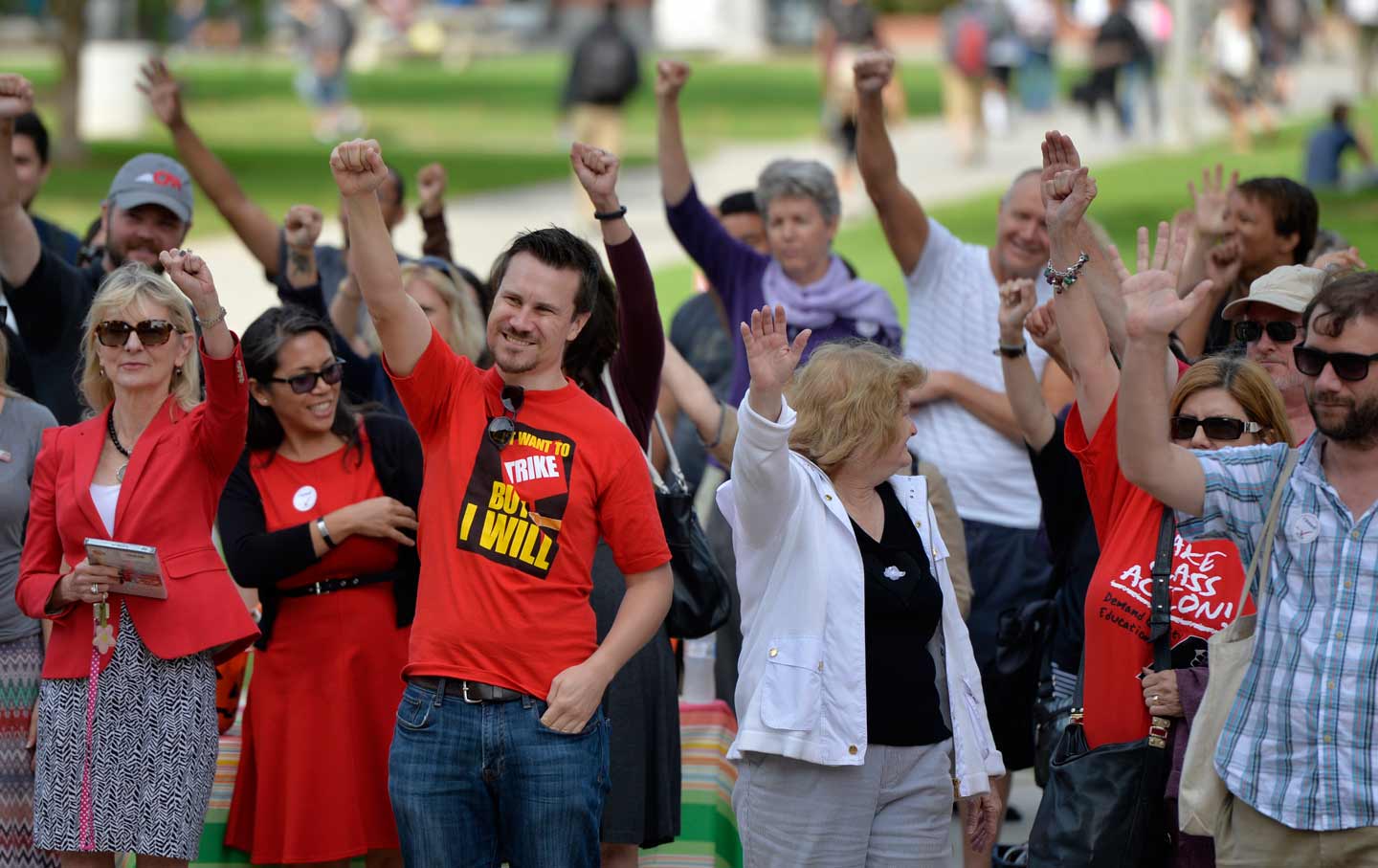 While debates over the threat college students pose to free speech on campuses continue to dominate headlines, the silencing that follows from contingent employment does not.

But, while student activists make for more colorful copy, if we’re concerned with free speech on campus, we should scrutinize how it’s threatened by those who hold the most power within these institutions: administrators.

Just ask Peter Fraunholtz. A Northeastern University adjunct for 18 years, Fraunholtz helped the university’s recently unionized adjuncts complete the bargaining process for their first contract. That process finally came to an end last month, nearly two years after the 900 instructors gained representation from the SEIU, making them the largest adjunct union in the Boston area.

Despite these large numbers, Fraunholtz estimates they won the campaign with “about 25 committed individuals.” Much of the absenteeism comes down to the fear that afflicts vulnerable workers when presented with the choice to either speak out or stay silent.

Testifying to the sometimes surreal nature of participation in the campaign, Fraunholtz tells the following story: “Northeastern University police came after me when I was flyering on campus. They took my ID, they called in my name, and then somebody came out and said ‘Oh, this has to be approved by the faculty senate,’ and then somebody else showed up from elsewhere and said, ‘Oh no, this has to be approved by marketing.’ Then a third person showed up and said, ‘If you walk over [to the public sidewalk], you can do whatever you want.’”

Pausing to laugh at the idea of getting a flyer critical of the administration approved by that administration’s marketing department, he adds, “But that’s what they’re thinking: it needs approval. Everything must be approved.”

Writing via e-mail, Joe Berry, author of Reclaiming the Ivory Tower: Organizing Adjuncts to Change Higher Education, says that if the chilling effect on speech that follows from job insecurity is hard to document, its prevalence is impossible to deny.

“There’s a joke among contingents that says, ‘Any contingent who says they teach their classes as a professional worker in the same way they would if they had job security is either lying or too stupid to be trusted with a class.’” Explaining how this unfolds in the classroom, he explains: “Self-censorship is by far the biggest consequence of this, as far as the education of students are concerned. Much of this is by omission. The topic not brought up, the questions not answered, the extra point not made, the opinion toned down and therefore less clear.”

The “contingents” Berry refers to are academic contingent workers otherwise known as adjuncts. In 1969, only 21.7 percent of faculty positions were non-tenure track, but in 2013, adjuncts constitute over half of all faculty, with tenure and tenure-track faculty a mere 34 percent of the total workforce, according to figures from SEIU, one of the key unions organizing adjuncts. Reliance on contingent workers is a pillar of what some have called the “creeping corporatism of the American university,” wherein the university operates as a business, often at the expense of those whose labor propels it to profitability.

Corporatization creates a dilemma for higher education: College, unlike most businesses, serves a social function—the production and transfer of knowledge—the achievement of which requires an environment of intellectual freedom that can conflict with profit margins, as some actors central to the model, such as donors, may take issue with controversial speech. In the past, tenure resolved some of this tension—once professors gain tenure, they’re walled off from these pressures, at least theoretically. With the erosion of tenure and a slack academic job market, free speech disappears as professors become increasingly disposable.

As Steven Vallas, a sociologist at Northeastern University who researches the changing nature of work, argues, a professor’s right to speak freely presumes a foundation of job stability.

“If you have an expansion of the adjunct, precarious professoriate, than you really are eroding the proportion of people who can speak their mind.”

In contrast to claims that censorious students are the central threat to the ability of college to serve as a marketplace of ideas, the silencing of speech that comes with a sense of one’s disposability appears much more powerful.

Conceding the difficulty of capturing the preemptive stifling of debate that comes with disposable worker status, we can take the severity of repercussions visited upon those who don’t censor themselves as indicative of the problem.

Take the case of Steven Salaita, an indigenous studies scholar whose offer of a position at the University of Illinois at Urbana–Champaign was rescinded after he tweeted critically about Israel’s 2014 attack on Gaza. A violation of academic freedom that resulted in a rare formal censure from the AAUP, for Salaita, administrative censorship is no secret. “For the uninitiated, the levels of vitriol and retribution that attend criticism of Israel can be stunning,” he writes, referencing a report authored by the Center for Constitutional Rights and Palestine Legal that details hundreds of reported acts of suppression of pro-Palestine advocacy in under two years. Salaita sued the University of Illinois for violating his rights. While he settled out of court for $875,000, discovery findings from his lawsuit reveal the likelihood of donor influence on the decision to fire him, with the chancellor communicating with donors about Salaita’s tweets and his possible dismissal.

As Salaita’s case demonstrates, the extent of donor pressure goes a long way to explain why administrations might choose to silence speech, explains William Robinson, a professor at the University of California–Santa Barbara. In 2009, Robinson caught the attention of outside organizations that then pressured UCSB administrators to charge him with violating the university’s academic code of conduct, according to Robinson’s account of the incident, as well as details published by his supporters.

Explaining the role financial needs play in decisions to censor faculty in public higher education, Robinson argues, “As public funding is cut, the administration becomes more reliant on private donors. These donors then use that leverage, threatening to withdraw donations if an administration doesn’t act.”

The problem is worsening as public funds for higher education are drying up across the country, according to a recent report by the Center on Budget and Policy Priorities. As this money dwindles, administrations turn to wealthy donors, creating the conditions under which prestigious donors can sway administrator’s decisions on how to respond to controversial faculty, if those faculty can get hired in the first place.

Although instances of administrative rebuke in the face of outside pressure remain rare, Adia Harvey Wingfield, a sociologist at Washington University of St Louis, views these incidents as “canaries in the coal mine,” affecting instructors and graduate students alike by showing what can result from speaking up on an issue someone else finds controversial. Writing about the cases of Saida Grundy and Zandria Robinson, two black female professors whose Twitter feeds offended outsiders who labeled their views anti-white.

While these cases concern individuals, administrative resistance to the exercise of protected rights by campus members is most acute with respect to union campaigns, as unions offer a means to protect whole categories of workers, obstructing administrators’ ability to discipline individual employees at will. The intransigence of administrators in the face of unions can be inferred by their retention of expensive law firms, handing over student tuition to the likes of Jackson Lewis, a firm the AFL-CIO calls “the number one union buster in America.” The effects of these efforts can by seen by figures compiled by the Delta Cost Project. This data shows that while private colleges increased spending on instruction by 22 percent between 1998 and 2008, administrative spending increased by 36 percent over the same period, with administrator-to-student ratios shrinking rapidly. In pursuit of a service model of higher education, universities appear determined to minimize labor costs even as administrative bloat grows.

According to Anne Fleche, an adjunct involved in the Northeastern adjunct union campaign “from SEIU’s very first e-mail,” a lawyer from Jackson Lewis led the university’s bargaining efforts, confirming accounts that the firm was at the bargaining table from start to finish. Some previously speculated that the administration would spend more on the firm than on any wage increases agreed upon in the end. At this thought, Fleche sighs. “I can’t imagine what they must have paid those lawyers instead of giving us a raise.”

Asked why a university would spend so much to defeat a union, Joe Berry explains that the benefits an administration accrues by weakening a union go beyond monetary considerations. “It’s a matter not of money in the short run, but power in the longer run,” he says via e-mail.

At Northeastern, where I’m a graduate student, many believe a planned one-day adjunct strike was the reason the two sides finally reached an agreement—bargaining ended at 1 am on January 14, just five days before the January 19 walkout. Although an e-mail sent to faculty, staff, and students states that the two sides reached an agreement after the university made it clear to the union that the strike wouldn’t have any impact on its final offer, faculty members I spoke with contest this claim, with Vallas calling it a “deeply disempowering move” meant to discourage campus members from organizing outside the terms approved of by the administration.

As Fleche put it, “When support for the walkout started coming in from students, alumni, and city councilors, while we’d been asking the administration for more bargaining days with no answer from them…suddenly [the administration] found days in January, and they happened to be before the walkout.

“Whatever the reason for the agreement’s timing, it’s substance is laudable: a working relationship between a university and its adjuncts.” The story at Northeastern has made it very clear that understanding the market pressures administrators are under illuminates the means to resist those constraints: supporting the unionization of faculty, graduate students, and staff, along with pushing for greater public funding of higher education.