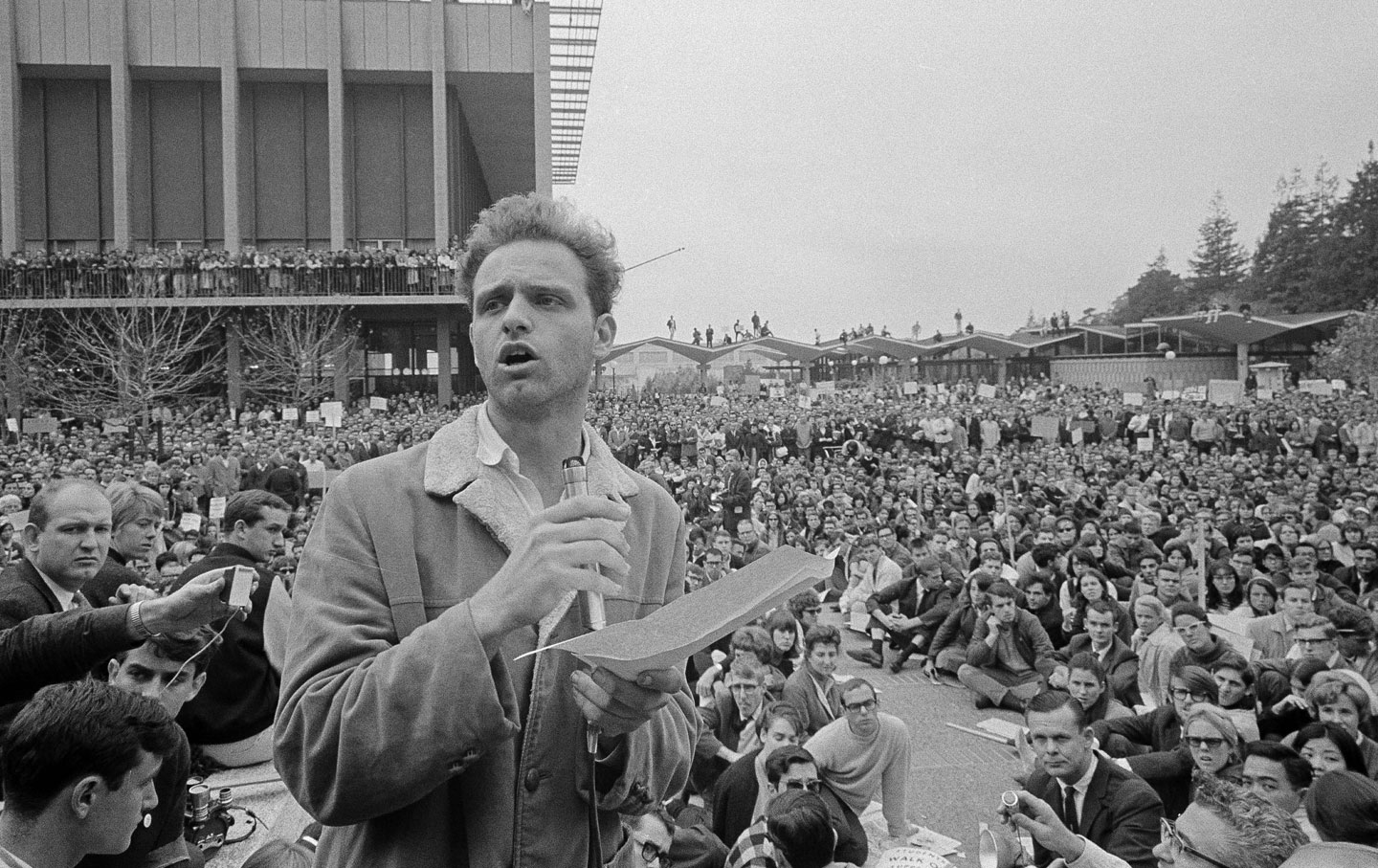 Mario Savio, leader of the Berkeley Free Speech Movement, speaks to assembled students on the campus at the University of California in Berkeley, California, on December 7, 1964. (AP Photo / Robert W. Klein)

Since publishing my biography of Berkeley Free Speech Movement leader Mario Savio almost a decade ago, I have often been asked what Savio would say about a host of contemporary issues. Since Savio died in 1996 and there was only one Mario Savio, it usually seemed to me inappropriate to speculate on how he might have viewed events that he unfortunately did not live to see. However, the free-speech controversy that raged this past month over the Berkeley College Republican–sponsored speaking event of the hateful far-right provocateur Milo Yiannopoulos, and the violent disruption of his talk last week, raised questions addressed so often and eloquently by Savio that one can see how he would likely have viewed them just by reflecting on his relevant writings and speeches on freedom of speech, minority rights, responsibility, and community.

The first point is so obvious it barely needs saying: Mario Savio supported the right of speakers from all political perspectives to speak on campus. He helped lead the Free Speech Movement in 1964 to secure that right and endured suspension from school and months in jail for the acts of civil disobedience (the mass sit-ins) he led at Cal to win those rights. Rather than ban speakers he disagreed with, Savio debated them, whether they were deans, faculty, the student-body president, or whoever. And this was the spirit not only of Savio but of the FSM, which had an almost Gandhian faith that through open discourse anyone had the potential to be won over to the movement’s free-speech cause, whose justness seemed to them self-evident.

Savio supported freedom of speech not merely on instrumental grounds but as an end in itself, since speech acts were in his eyes the essence of what it meant to be human, and were the key to enlightenment and freedom. Having suffered with a very serious speech defect that blocked his ability to speak fluidly in his childhood and teens, Savio developed a very personal, even spiritual reverence for freedom of speech, and a disdain for attempts to constrict that freedom. Indeed, though an ex-Catholic, Savio used religious imagery to express that reverence. Citing his favorite quote by Diogenes that “the most beautiful thing in the world is the freedom of speech,” Savio explained that “those words are…burned into my soul, because for me free speech was not a tactic, not something to win for political [advantage].… To me freedom of speech is something that represents the very dignity of what a human being is.… That’s what marks us off from the stones and the stars. You can speak freely. It is almost impossible for me to describe. It is the thing that marks us as just below the angels. I don’t want to push this beyond where it should be pushed, but I feel it.”

So Savio would almost certainly have disagreed with the faculty and students who urged the administration to ban Milo Yiannopoulos from speaking on campus, and been heartened by the chancellor’s refusal to ban a speaker. But that does not mean Savio would have been dismissive of the concerns the faculty raised in their letter seeking to ban Yiannopoulos on account of Yiannopoulos’s history of crude and cruel baiting of students of color, women, and transgender students in his campus speeches. Savio was a veteran of the civil-rights movement whose battle against racism had led to his arrest in a nonviolent sit-in for fair hiring in San Francisco’s Sheraton Palace Hotel, and then to risk his life in the historic Mississippi Freedom Summer crusade for black voting rights. So it is not surprising that later in Savio’s life when he was on the faculty of Sonoma State University he sought to convince the editors of the student newspaper there that their use of the term “nigger” in the paper was hurtful and irresponsible, which is why it had sparked angry protests by African-American students. Savio did not deny students had the right to print what they chose, but asked that they reach out to their black classmates and reflect on whether in the future they could be more thoughtful about the impact their words had on the campus community.

The Berkeley College Republicans (BCRs) who invited Yiannopoulos have been quick to invoke the FSM and to present themselves and Yiannopoulos as free speech martyrs—a position embraced by much of the mass media. But in the context of Savio’s speeches and writings about free speech, the Republicans might want to be a bit more reflective. Listen to Savio’s words from the FSM victory rally, December 9, 1964: “We are asking that there be no, no restrictions on the content of speech save those provided by the courts. And that’s an enormous amount of freedom. And people can say things in that area of freedom which are not responsible. Now…we’ve finally gotten into a position where we have to consider being responsible, because we now have the freedom within which to be responsible. And I’d like to say at this time…I’m confident that the students and the faculty of the University of California will exercise their freedom with the same responsibility they’ve shown in winning their freedom.” (Emphasis added.) In other words, merely because you have the right to invite a hateful and irresponsible speaker to campus does not mean that it was responsible to do so. Indeed, when the Daily Californian editors questioned the BCR spokesman, they found that he had not even read or heard Yiannopoulos’s speeches on other campuses. That interview suggested that the BCR had invited him for the spectacle involved and to antagonize the Berkeley left. Again, that is their right. But is it responsible? Does it promote dialogue? Or does it just inflame and polarize?

For Savio, these would not likely have seemed trivial questions. He wanted all to speak freely, but also to be thoughtful as both speakers and listeners. This is why on the FSM’s 25th anniversary, in Savio’s design for a Free Speech Movement monument (never built) he included not only the Diogenes quote cited above on the beauty of freedom of speech but an ephebic oath (modeled on that of ancient Athens) to remind speakers of their “special responsibility.” The oath read: “We will never intentionally bring disgrace upon…our university. By our words and actions we endeavor to honor the ideals of those who came before us, and deepen and strengthen the community in which we are privileged to speak.”

I remember when first reading the words Savio chose for his FSM monument design how surprised I was that he had coupled the liberalism of Diogenes with the conservatism of the ephebic oath. After all, we tend to associate the 1960s, the decade of the FSM, with an “anything goes” philosophy. But when you considered Savio’s intensive study of ancient Greece and Rome in his early college years, it made sense that he would understand the dangers of demagoguery, that the great gift of free speech could be abused. His answer, of course, was not to repress speech but to urge speakers and listeners to think critically about their discourse. And so he hoped that the Diogenes quote and the oath would lead speakers “to judge whether” they had “spoken worthily” and encourage the audience at Berkeley to judge “critically whether the speech it hears is really free or merely cant.”

What Mario Savio did in his FSM victory speech in 1964 was in its own way reminiscent of what Martin Luther King Jr. did in his March on Washington speech a year earlier. Both were seeing beyond their time, with King sharing his dream of an America freed from the shackles of racism and Savio envisioning a campus as it was being reborn, liberated from its history of binding restrictions on political expression. Without idolizing Savio, it is not too much to see in the oath he designed a kind of prophetic warning that freedom exercised irresponsibly or freedom repressed could “bring disgrace upon our university.” Those were the words that came to mind when the live stream on my computer brought those disturbing images of windows smashed and fires ignited in the student union last week. Savio is, sadly, no longer with us, but I hope his words will push us all to reflect on whether our actions in this crisis have honored the free speech “ideals of those who came before us” and served to “deepen and strengthen the community in which we are privileged to speak.”