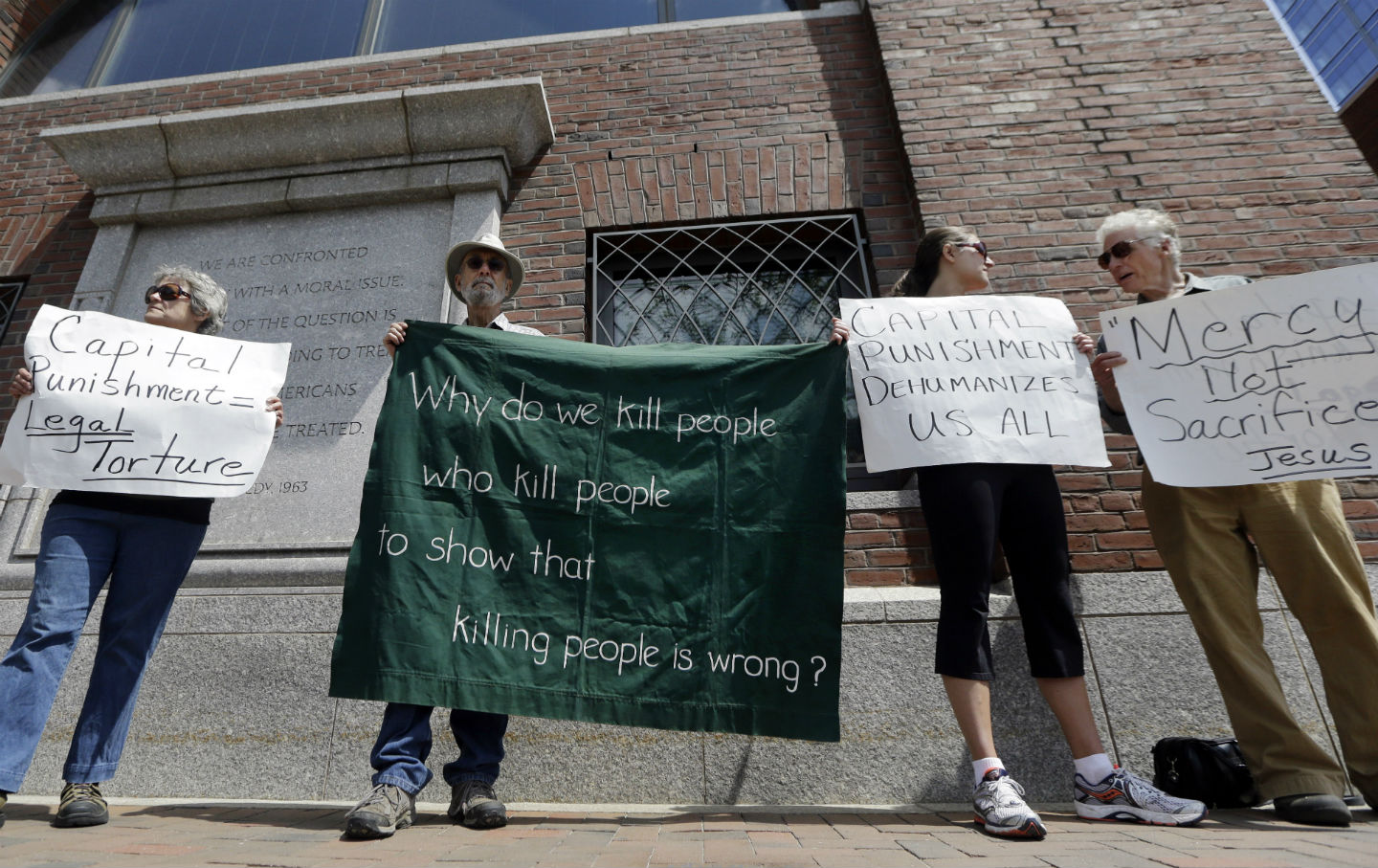 Demonstrators hold signs against the death penalty outside federal court in Boston during the penalty phase in Dzhokhar Tsarnaev's trial in May. (AP Photo/Elise Amendola)

Is it moral in this day and age for the state to take a life? Apparently, the majority on the Supreme Court think it is. Four cases before the Court this session will test the scope and application of the death penalty—though none promises to outlaw it altogether.

Most Western countries, including England, France, and Germany, abolished the death penalty long ago, as have 19 American states and the District of Columbia. Though recent polls show that a majority—56 percent—of Americans believe that the death penalty is sometimes just and appropriate, that is the lowest level of support reported in the last 40 years.

In 1972, in Furman v. Georgia, the Supreme Court came close to abolishing the death penalty as “cruel and unusual punishment” prohibited by the Eighth Amendment. The case did not ban capital punishment, but because the justices ruled that it was cruel and unusual when unfairly applied, it led to a de facto moratorium throughout the United States. That moratorium came to an end in 1976. The Constitution itself contains the tension: it expressly authorizes the death penalty since the Fifth Amendment refers to answering to a “capital crime” and states that the government may deprive persons of life provided there is “due process of law” while the Eighth Amendment outlaws “cruel and unusual punishments.”

The latest legal challenges to the “machinery of death,” a prelude to a legal assault on the constitutionality of the death penalty, involve the death penalty protocols in Oklahoma, as well as Florida, Georgia, Louisiana, and Kansas. On March 30, the Court granted review of three Kansas death penalty cases and heard oral argument in a fourth—a Louisiana case presenting issues of whether a state prisoner who faces the death penalty has an intellectual disability that would preclude capital punishment. In the three Kansas cases, it granted review of the Kansas Supreme Court’s decisions overturning the defendants’ death sentences on the technical ground that their sentencing juries were not told that the defendant did not have to prove mitigating circumstances beyond a reasonable doubt.

﻿On no other issue has the partisan divide been so bitterly fought in the “marble palace” of the Supreme Court as it has on capital punishment.

The Court also heard argument in the case of a Louisiana man, Kevan Brumfield, sentenced to death before the Supreme Court ruling in Atkins v. Virginia banned the execution of defendants with intellectual disabilities. The Court will determine whether the federal courts must defer to a decision of the state courts that rejected his claim of intellectual disability based solely upon the evidence presented at his trial or whether to credit a subsequent federal district court finding after a seven-day evidentiary hearing that Brumfield is intellectually disabled, and may not be executed.

The lead defendant in the Oklahoma case had been Charles F. Warner, who was dead by the time the Court had a chance to grant review. Warner had been executed eight days before. The Court changed the name of the Warner case from Warner v. Gross to Glossip v. Gross shortly after Warner was put to death. Richard E. Glossip was another prisoner on Oklahoma’s death row whose case was to have been heard along with Warner’s. It is a glitch in Supreme Court procedures that it takes only four votes to grant review of a case, but five votes to stay an execution. Occasionally, a justice, who did not vote to grant review, casts a “courtesy fifth” vote in favor of a stay so as not to render the entire exercise academic. This is, however, a matter of convention, not statute or rule of court. Since August 2014, at least four prisoners have been executed over the objections of four justices. Though Chief Justice Roberts at his confirmation hearing told the Senate that the “courtesy vote” practice “makes great sense,” the Court continues to permit the executions of prisoners whose petitions have been granted before it has had a chance to review the case.

On April 29, the Court heard oral argument in Glossip, challenging the use of an anesthetic known as midazolam used as part of Oklahoma’s three-drug lethal protocol. Midazolam was used as the first drug in three botched executions in 2014. Prisoners on Oklahoma’s death row argued that the drug Midazolam should not be used in executions because it could not reliably anesthetize the prisoner to prevent her from experiencing extreme pain when the second and third drugs in Oklahoma’s execution protocol were injected. The justices questioned both sides intensely, with the more conservative justices generally favoring the state, and the more liberal justices favoring the prisoner. Justice Elena Kagan compared the effects of potassium chloride, the third execution drug, to being burned alive, saying, “Suppose that we said we’re going to burn you at the stake, but before we do, we’re going to use an anesthetic of completely unknown properties and unknown effects.” Conservatives criticized the case as a veiled attack on the death penalty itself.

On no other issue has the partisan divide been so bitterly fought in the “marble palace” of the Supreme Court as it has on capital punishment. Some justices have argued that the original scope of the prohibition on “cruel and unusual punishment” is not immutable but changing. In 1958, Chief Justice Earl Warren envisioned a Constitution which reflected “the evolving standards of decency that mark the progress of a maturing society”—in other words a “living Constitution” that means what the individual judge thinks it ought to mean.

Justice Scalia, by contrast, believes that in the years since Furman, the Court has artificially imposed, “under cover of the Constitution,” limitations that did not exist when the Eighth Amendment was adopted. The Court has ruled out the death penalty for garden-variety murders as opposed to those evincing wanton brutality or depravity. It has ruled out the mandatory imposition of capital punishment, and held that the ultimate penalty may only come after a jury recommendation after considering all factors, mitigating and aggravating. It has ruled out death for the intellectually disabled (formerly the retarded) while it searches for a definition as to who is disabled and who is not, has prescribed an age limit at the time of the offense, at the moment 17, and has wrestled with what chemicals may be used in a lethal injection so that death might not be lingering or painful or botched altogether.

Strangely, certain conservative justices, stressing the sanctity of human life when it comes to abortion or assisted suicide, see nothing inconsistent in their position on capital punishment. Explaining the apparent contradiction, Scalia distinguishes between the morality of the state preventing one human being from taking her own life or the life of another (e.g. assisted suicide or abortion), and the morality of the state taking a life as a form of retribution. In his world, the state—provided (and this is the big provided) it “rules justly”—enjoys “a scope of moral action that goes beyond what is permitted to the individual.” Really? The state, in his view, is the emissary of God, the “powers that be are ordained of God.” After all, the Good Book in Romans recites, “Vengeance is mine saith the lord.”

Arguing that it is a matter of Christian catechism, Scalia concludes that the “more Christian a country is, the less likely it is to regard the death penalty as immoral.” Since the Christian believes in an afterlife, free will, the ability of men and women to resist temptation, heaven for those that do, and hell, fire and brimstone for those who give in, Scalia would argue, Christians are doctrinally inclined not to view the death penalty as immoral.

Scalia would reject the Evangelium Vitae of Pope John Paul II, issued in 1995, pronouncing the death penalty to be wrong. He would also reject the forceful recent pronouncements of Pope Francis, inveighing against the death penalty “no matter how serious the crime committed.” He argues that rejection of capital punishment is not a moral position of the church, which as a Catholic he is bound to accept; it is merely an exhortation to the faithful requiring careful consideration. After considering the Pope’s encyclical, he has decided to reject it.

The conservative bloc on the Court, led by Scalia, finds support for the death penalty in the text and original public understanding of the Constitution. The liberals, as exemplified by Kagan, who appear to be in the minority, believe in a “living” Constitution, which evolves with the standards of the community. Meanwhile, though it appears that public support for capital punishment is declining, the pollsters tell us that most Americans favor the ultimate penalty.