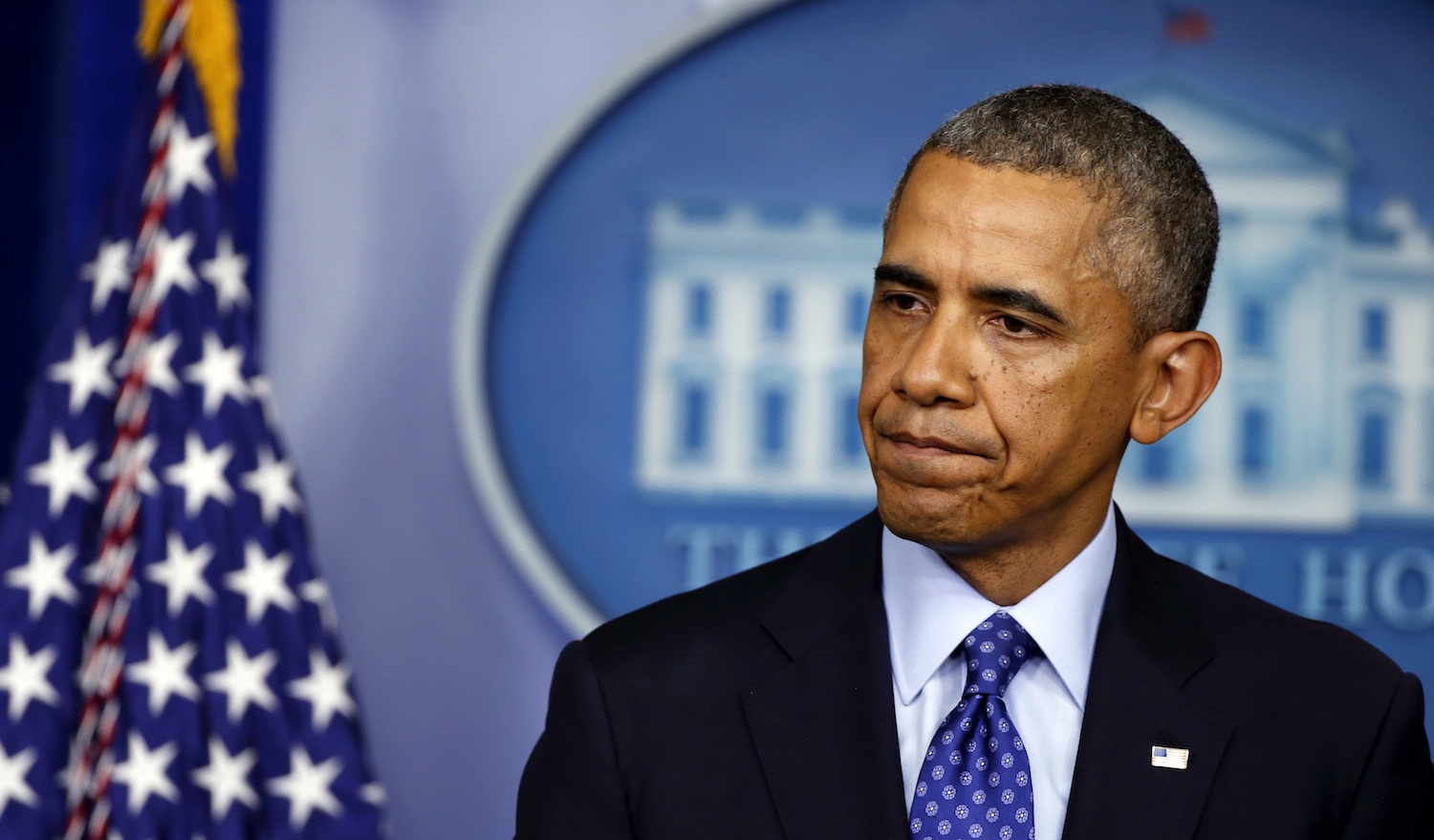 Imagine the president, speaking on Iraq from the White House Press Briefing Room last Thursday, as the proverbial deer in the headlights—and it’s not difficult to guess just what those headlights were. Think of them as Benghazi on steroids. If the killing of an American ambassador, a Foreign Service officer and two CIA private security contractors could cause almost two years of domestic political uproar, unending Republican criticism and potential damage to the president’s “legacy,” consider what an Iraq in shambles and a terrorist state stretching across “the Levant” might do. It’s hardly surprising, then, that a president regularly described as “reluctant” nonetheless stepped before the press corps and began the slow march back into Iraq and toward disaster.

It was a moment of remarkable contradictions. Obama managed, for example, to warn against “mission creep” even as he was laying out what could only be described as mission creep. Earlier that week, he had notified Congress that 275 troops would be sent to Iraq, largely to defend the vast US embassy in Baghdad, once an almost three-quarters-of-a-billion-dollar symbol of imperial hubris, now a white elephant of the first order. A hundred more military personnel were to be moved into the region for backup.

Then on Thursday, the president added 300 “military advisers” drawn from Special Operations forces and evidently meant to staff new “joint operation centers in Baghdad and northern Iraq to share intelligence and coordinate planning to confront the terrorist threat.” (If you are of a certain age, that word “adviser” will ring an eerie Vietnam-ish bell. You should, in fact, already be hearing a giant sucking sound somewhere in the distance.) He also spoke vaguely of positioning “additional US military assets in the region” into which the aircraft carrier USS George H.W. Bush, accompanied by a guided-missile cruiser and destroyer, had already sailed. And mind you, this was only the reasonably public part of whatever build-up is underway. While the president spoke of being “prepared to take targeted and precise military action” in Iraq, at least one unnamed “senior administration official” was already at work opening up the possibility of air strikes in Syria. “We don’t restrict potential US action to a specific geographic space,” was the ominous way that official put it.

In other words, short of combat troops on the ground in significant numbers, that table on which “all options” are always kept open was visibly moved into Washington’s War Room of the Levant. It’s quite a development for a president who took special pride in getting us out of Iraq (even though that departure was engineered by the Bush administration, while Obama’s officials tried to negotiate leaving a force behind, only to be thwarted by the Iraqi government). In tandem with the military moves, the president and his national security team, perhaps reflecting through a glass darkly the “democracy agenda” of the Bush era, also seemed to have dipped their fingers in purple ink. They were reportedly pressuring Iraqi politicians to dump Prime Minister Maliki and appoint a “unity” government to fight the war they want. (Adding to the farcical nature of the moment, one name raised for Maliki’s position was Ahmed Chalabi, once the darling of Bush-era officials and their choice for that same post.)

There is, however, no way that an American intervention won’t be viewed as a move to back the Shia side in an incipient set of civil wars, as even retired general and former CIA director David Petraeus warned last week. In fact, in opinion polls Americans overwhelmingly reject military intervention of any sort, just as every experience in the post-9/11 era should signal one simple lesson: don’t do it! But Obama and his top officials evidently can’t help themselves. The rising tide of criticism-to-come is undoubtedly already pre-echoing in their heads—previewed by the endless media appearances of Senator John McCain and a stream of op-eds from former vice president Dick Cheney, former occupation proconsul L. Paul Bremer III and others from the crowd of “experts” who created the Iraq disaster and for whom being wrong about that country is a badge of honor.

We are clearly in the early stages of the intervention sweepstakes. The initial moves may even be greeted as auspicious, but watch out for the long-run destabilizing effects in an already chaotic region. Washington only imagines it can control such combustible situations. In reality, it hasn’t in the past and it won’t be able to this time either, which means unexpected ugliness will ensue. (And just wait until, in one of those joint operation centers or elsewhere, the first Iraqi soldier, like his Afghan counterparts, turns his gun on one of those special ops advisers.)

All that’s missing at the moment is the final touch on the Obama version of mission creep. I’m talking about the signature gesture for this administration in its conflicts across the Greater Middle East (and increasingly Africa). If you listen carefully, you can already hear the theme music for the era rising in the background and—with apologies to Stephen Sondheim for mangling his beautiful elegy to a lost relationship—it’s clearly “Send in the Drones.”