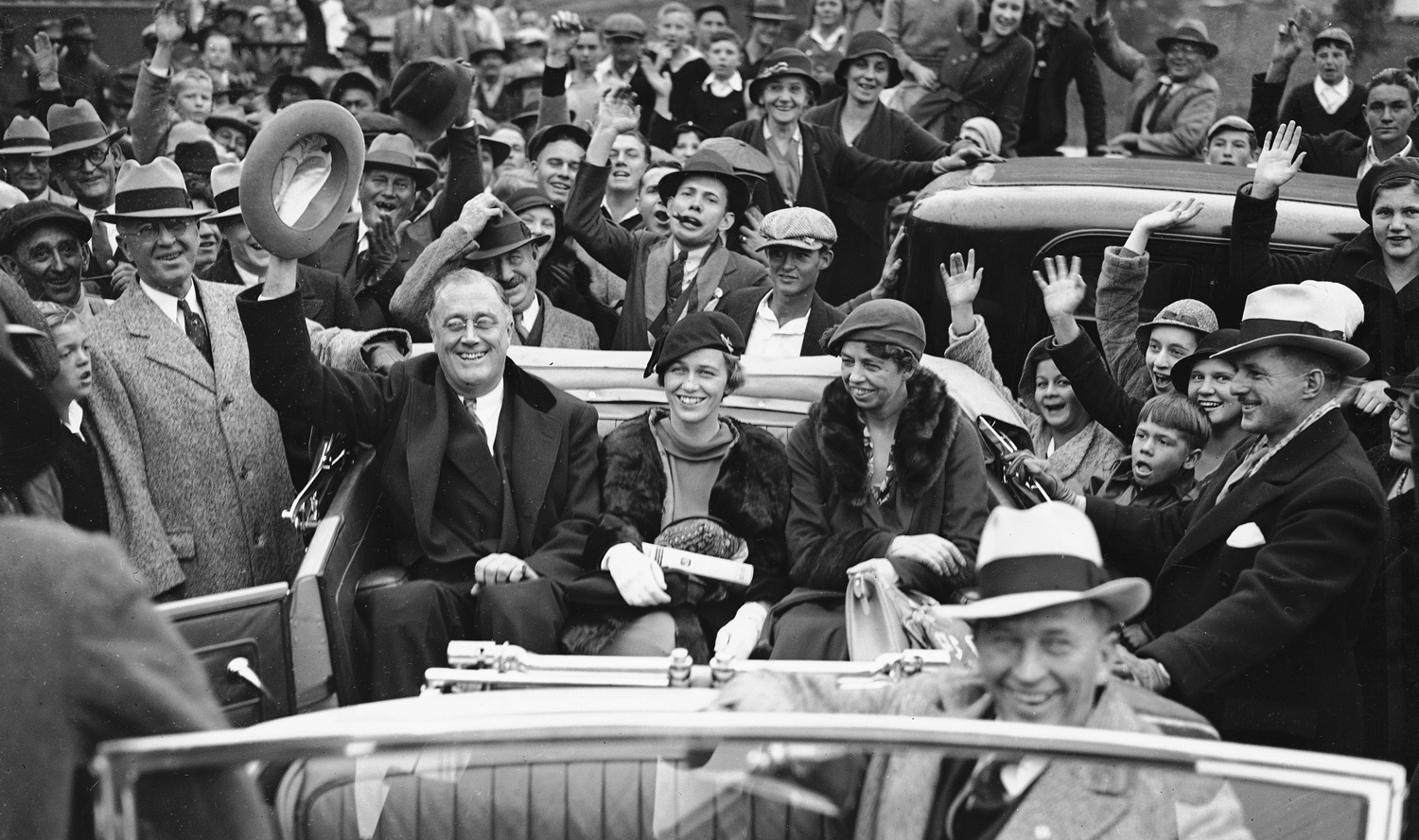 Seventy years after the week in which the death of President Franklin Delano Roosevelt shocked the nation and the world, it is easy enough to imagine the loss of America’s longest-serving and most-transformative president as history.

But FDR understood the American story as that of a long struggle characterized by old fights on new grounds. “In our own land we enjoy indeed a fullness of life greater than that of most nations,” he said. “But the rush of modern civilization itself has raised for us new difficulties, new problems which must be solved if we are to preserve to the United States the political and economic freedom for which Washington and Jefferson planned and fought.”

The way to “reaffirm the faith of our fathers” Roosevelt argued, as he sought and won his greatest electoral victory in 1936, was “to restore to the people a wider freedom.”

“That very word freedom, in itself and of necessity, suggests freedom from some restraining power,” FDR explained, in his “Rendezvous With Destiny” speech to the Democratic National Convention of 1936; he continued:

In 1776 we sought freedom from the tyranny of a political autocracy—from the eighteenth-century royalists who held special privileges from the crown. It was to perpetuate their privilege that they governed without the consent of the governed; that they denied the right of free assembly and free speech; that they restricted the worship of God; that they put the average man’s property and the average man’s life in pawn to the mercenaries of dynastic power; that they regimented the people.

And so it was to win freedom from the tyranny of political autocracy that the American Revolution was fought. That victory gave the business of governing into the hands of the average man, who won the right with his neighbors to make and order his own destiny through his own government. Political tyranny was wiped out at Philadelphia on July 4, 1776.

Since that struggle, however, man’s inventive genius released new forces in our land which reordered the lives of our people. The age of machinery, of railroads; of steam and electricity; the telegraph and the radio; mass production, mass distribution—all of these combined to bring forward a new civilization and with it a new problem for those who sought to remain free.

For out of this modern civilization economic royalists carved new dynasties. New kingdoms were built upon concentration of control over material things. Through new uses of corporations, banks and securities, new machinery of industry and agriculture, of labor and capital—all undreamed of by the Fathers—the whole structure of modern life was impressed into this royal service.

There was no place among this royalty for our many thousands of small-businessmen and merchants who sought to make a worthy use of the American system of initiative and profit. They were no more free than the worker or the farmer. Even honest and progressive-minded men of wealth, aware of their obligation to their generation, could never know just where they fitted into this dynastic scheme of things.

The whole point of the New Deal was to challenge the economic royalists on behalf of the great mass of Americans, and to establish that wider freedom.

“Today we stand committed to the proposition that freedom is no half-and-half affair. If the average citizen is guaranteed equal opportunity in the polling place, he must have equal opportunity in the market place. These economic royalists complain that we seek to overthrow the institutions of America. What they really complain of is that we seek to take away their power. Our allegiance to American institutions requires the overthrow of this kind of power. In vain they seek to hide behind the flag and the Constitution. In their blindness they forget what the flag and the Constitution stand for. Now, as always, they stand for democracy, not tyranny; for freedom, not subjection; and against a dictatorship by mob rule and the over-privileged alike.”

Roosevelt was re-elected that year, as he would be again in 1940 and 1944. He led the nation as it struggled to overcome a Great Depression at home and fascism abroad. But he never lost sight of the great struggle to overcome economic tyranny.

“It is our duty now to begin to lay the plans and determine the strategy for the winning of a lasting peace and the establishment of an American standard of living higher than ever before known. We cannot be content, no matter how high that general standard of living may be, if some fraction of our people—whether it be one-third or one-fifth or one-tenth—is ill-fed, ill-clothed, ill-housed, and insecure,” Roosevelt told the Congress and the nation in the 1944 State of the Union address that framed the final year of his presidency.

“This Republic had its beginning, and grew to its present strength, under the protection of certain inalienable political rights—among them the right of free speech, free press, free worship, trial by jury, freedom from unreasonable searches and seizures. They were our rights to life and liberty,” said FDR, who explained:

As our nation has grown in size and stature, however—as our industrial economy expanded—these political rights proved inadequate to assure us equality in the pursuit of happiness.

We have come to a clear realization of the fact that true individual freedom cannot exist without economic security and independence. “Necessitous men are not free men.” People who are hungry and out of a job are the stuff of which dictatorships are made.

In our day these economic truths have become accepted as self-evident. We have accepted, so to speak, a second Bill of Rights under which a new basis of security and prosperity can be established for all—regardless of station, race, or creed.

—The right to a useful and remunerative job in the industries or shops or farms or mines of the nation;

—The right to earn enough to provide adequate food and clothing and recreation;

—The right of every farmer to raise and sell his products at a return which will give him and his family a decent living;

—The right of every businessman, large and small, to trade in an atmosphere of freedom from unfair competition and domination by monopolies at home or abroad;

—The right of every family to a decent home;

—The right to adequate medical care and the opportunity to achieve and enjoy good health;

—The right to adequate protection from the economic fears of old age, sickness, accident, and unemployment;

—The right to a good education.

All of these rights spell security. And after this war is won we must be prepared to move forward, in the implementation of these rights, to new goals of human happiness and well-being.

America’s own rightful place in the world depends in large part upon how fully these and similar rights have been carried into practice for all our citizens. For unless there is security here at home there cannot be lasting peace in the world.

Seventy years after this country lost Franklin Roosevelt and the promise of a final term spent advocating for a realization of the “new goals of human happiness and well-being,” those goals have yet to be realized. The historian Havey Kaye has argued that President Obama should recognize Roosevelt’s vision and present it anew. The Roosevelt Institute and the Four Freedoms Center remind us that expanding and extending the debate about basic rights and democracy presents “a compelling vision for the future.” Vermont Senator Bernie Sanders has explored these possibilities with his “Economic Agenda for America.” Those are starting points, but they should not be the end of the embrace.

Democrats who speak of FDR’s legacy, and progressives who understand that legacy in its full measure, honor him best by renewing and extending the struggle for a “Second Bill of Rights.”