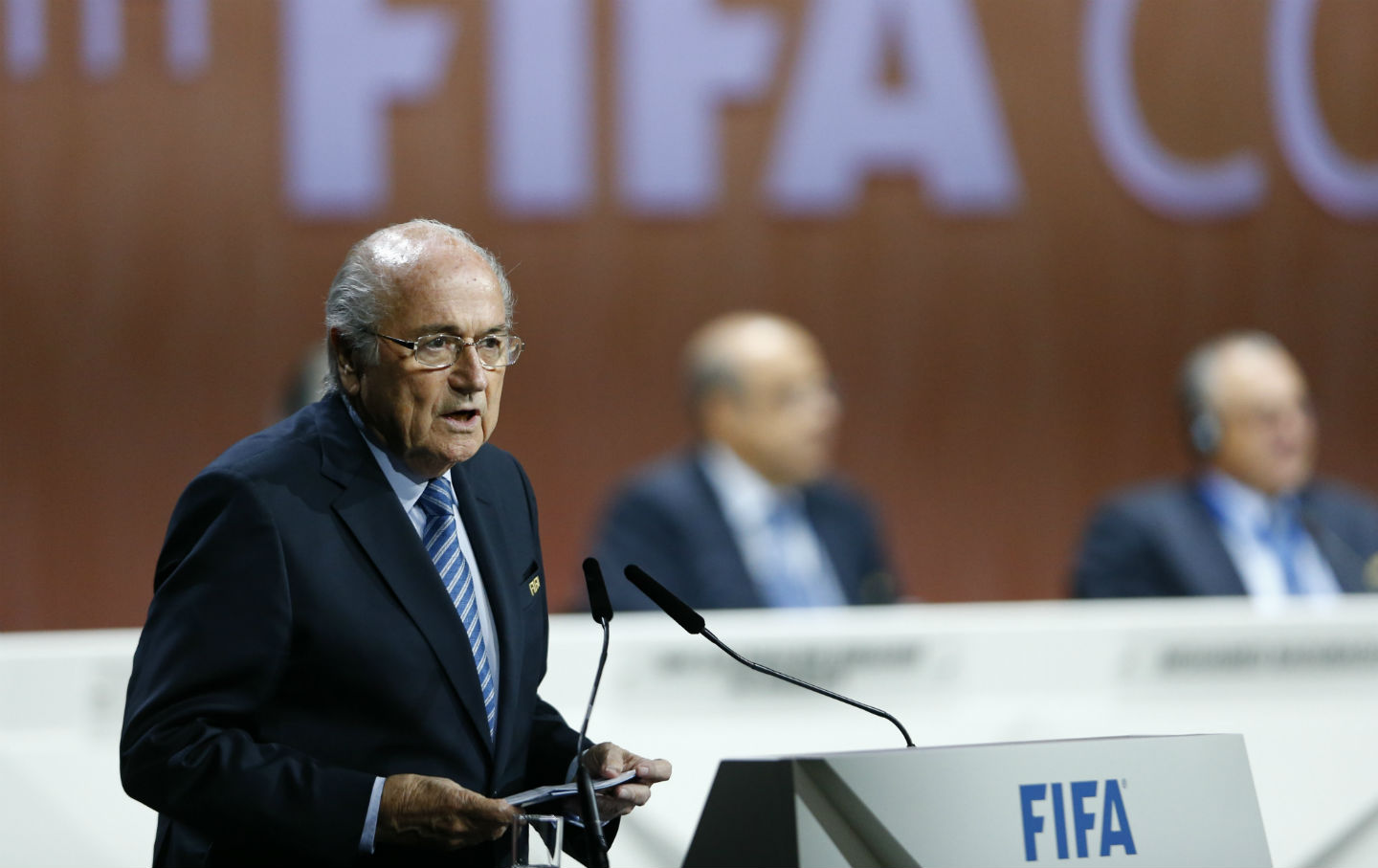 Next week is supposed to be the launch of one of the crown jewels of international soccer, the 2015 Women’s World Cup. Instead, this adrenalizing tournament is threatened with being overshadowed by the unraveling ugliness of the international soccer body FIFA under the warped, now reelected leadership of Sepp Blatter. As Blatter starts his fifth term caked in scandal, with promises of "more bad news to come," the World Cup will fight for attention and space, their obstacle the monstrous ego of one man. It is a fitting metaphor for how Blatter has treated women's soccer since he took power in 1998.

FIFA’s racketeering scandal imperils what promises to be a dazzling event. The tournament will feature the world’s most talented players on earth, from German goalkeeper Nadine Angerer to US striker Abby Wambach; from Brazilian mega-star Marta to Christine Sinclair of the host country in Canada, from Célia Sasic of Germany to French badass Louisa Necib; from Nigeria’s 20 year old sensation Asisat Oshoala to Yuki Ogimi, the striker from the defending champions Japan. Yet Blatter may not even attend the tournament out of fear that he will be led away from it in handcuffs.

Blatter has called himself "The Godfather” of women’s soccer, but unless we are talking about either a Mafia Don or a very creepy uncle, this appellation does not fit. Yes, Blatter’s greater crimes are seen in the migrant workers, killed building the stadiums of Qatar and the destroyed homes of Brazil. But his warping of women’s soccer is enraging. In fact, Blatter’s ironclad grasp on the FIFA presidency has long been an impediment to pressing ahead developing those who aspire to be the future Wambachs and Martas of world soccer.

Blatter has long flung misogyny in every direction. In 2004, when asked how to jumpstart the popularity of women’s soccer, he suggested, “Let the women play in more feminine clothes like they do in volleyball. They could, for example, have tighter shorts.”

A decade later Blatter was still at it. He said about the dearth of women inside the FIFA power structure was because “Football is very macho . . . It’s not easy for the ladies to have a position inside FIFA.”

It’s not easy for women at the awards podium either. US soccer phenom Alex Morgan recently told Time magazine that at the FIFA World Player of the Year ceremony in 2012, “FIFA executives and FIFA president Sepp Blatter didn’t know who I was. And I was being honored as top three in the world. That was pretty shocking.” Morgan stated, “I have experienced sexism multiple times [in FIFA], and I’m sure I will a lot more.” With Blatter’s reelection, the odds of blatant sexism in her future will only surge.

Lest we think Blatter has been cured of his inability to recognize the biggest stars in women’s soccer, the following year at the World Player of the Year Awards in Zurich, he mistook Abby Wambach’s wife, Sarah Huffman, for Brazilian soccer star Marta. Grant Wahl reported that Blatter ambled up to Huffman and bearhugged her, exclaiming, “Marta! You are the best! The very best!” Wambach said of the incident, “He had no idea who Marta was, and she’s won the award five times . . . For me, that’s just a slap in the face because it shows he doesn’t really care about the women’s game.”

FIFA’s monomaniacal brand management cut with sexism, reared its greedy head again this week when a Swedish television station had the temerity to suggest that this summer’s soccer tournament simply be referred to simply as "The World Cup.” FIFA swiftly squelched such efforts to promote equality, insisting that Sweden’s TV4 only use the “FIFA Women’s World Cup” moniker. FIFA warned that if the Swedish TV station refused to abide by FIFA’s dictates, they could well be in breach of contract. In short, at FIFA, sexism is contractual.

With Blatter at the helm, it’s no wonder this summer’s World Cup in Canada is being played on artificial turf, despite the vociferous protests of soccer players and fans across the world. Holding the men’s World Cup on fake grass would be unthinkable. Megan Rapinoe, star of the US National Team who will feature in this summer’s World Cup got it exactly right when, speaking at a SXSW Sports event in March, she said simply, “Fuck FIFA.”

There are many reasons to chant Rapinoe’s pithy mantra. In 2007 FIFA banned wearing the hijab. Citing feeble safety concerns with no basis in science, FIFA essentially outlawed Muslim women from playing the sport by disallowing the traditional head covering. Again, FIFA baked discrimination into everyday life. This wasn’t changed until 2014. As sports activist, writer and hardcore soccer fan Shireen Ahmed said to us, "When the hijab ban was formally lifted in 2014, FIFA's Secretary General Jérôme Valcke made the announcement. That made tremendous sense as Sepp Blatter's previous comments on female footballer's clothing was to recommend that they wear shorter shorts to attract supporters. His entire presidency is reminiscent of a series of stories from The Onion."

Yet the sport will always be bigger than Sepp Blatter, which is the root of not only his power but what is so amazing about soccer. Shireen Ahmed put it perfectly. "The timing of the FIFA investigations is unfortunate given that the Women’s World Cup is starting in less than two weeks. I don't think it should affect ticket sales or dampen the mood at all. Canada is hyped up and ready. This tournament is for young women and girls and for the world. Need to keep focus there. Spirits are high. What women's football has achieved is with the support of far more important players than the FIFA Ex-Co. This is a distraction. No one is bigger than the beautiful game. Especially not privileged men. And definitely not Sepp Blatter."