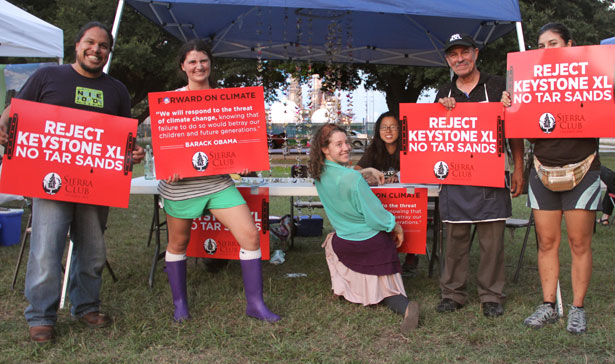 Ever since President Obama announced that the Keystone XL pipeline would be in the national interest only if it “does not significantly exacerbate the problem of carbon pollution,” the project has been scrutinized primarily on those terms. But there are other concerns to factor into an analysis of the project’s costs and benefits, particularly the local effects on communities along the pipeline route, from the tar sands in Alberta to refineries in Texas.

“I believe the health impacts of tar sands oil are being ignored,” Senator Barbara Boxer warned at a press conference Wednesday, where she and Senator Sheldon Whitehouse called on the Obama administration to conduct a thorough review of potential public health implications of extracting, transporting and refining oil from the tar sands before making a decision about the pipeline. Although the State Department finalized the environmental assessment of the project last month, Boxer said the report “was woefully inadequate when it came to exploring human impacts of the pipeline.” (The State Department had not responded to a request for comment at press time.)

Those impacts include rising cancer rates in places like Fort Chipewyan, a First Nations community downstream from a major tar sands site in Alberta; air pollutants and carcinogens in neighborhoods where refineries will process the oil, like Port Arthur and Manchester in Texas; immediate safety risks from transporting corrosive crude; and mountains of pet coke, an oil sands’ byproduct, which are growing throughout the Midwest. Much of this risk would be born—and is already being born—by poor people of color. Port Arthur, for example, has a 26 percent poverty rate, compared to 17 percent in the rest of Texas; three-quarters of the residents are of color. Manchester, a predominantly Latino community, is already one of the most polluted neighborhoods in the country.

“Health miseries follow tar sands—from extraction to transport to refining to waste disposal,” said Boxer. “Children and families in the US have a right to know now—before any decision to approve the Keystone tar sands pipeline—how it would affect their health.”

The State Department has been criticized before by lawmakers and the Environmental Protection Agency for failing to properly assess the health threats posed by KXL. “We’re at a point where health issues are often glossed over,” said Danielle Droitsch, a senior attorney with the Natural Resources Defense Council and co-author of a report on the health effects of tar sands crude. Part of the problem is that there isn’t a substantial body of research into whether oil from the tar sands impacts health differently than traditional crude. “At a minimum we’re going to have to study this a little bit further. Frankly, there’s enough out there to suggest this stuff is actually worse, and that what we really need to do is transition away to cleaner sources,” Droitsch said.

The public health blindspot extends beyond KXL. The Obama administration has embraced the North American oil and gas boom without really acknowledging that extracting and refining more fossil fuels at home means increasing the immediate health risks associated. Like Keystone, an “all of the above” energy strategy should be examined for its potential climate impact, which is itself a public health threat. But there are also questions to address about environmental justice and accountability for the petrochemical corporations powering the domestic boom. Many communities—in southern Louisiana, for example—have been sacrificed for the oil economy already. Whether more are ruined is a matter of deliberate policy making, not an inevitability.

Democrats in the House are also hammering the State Department for deficiencies in its environmental review. On Tuesday, Representative Raúl Grijalva asked the Government Accountability Office to audit the conflict-of-interest procedures the State Department used when it selected a contractor to conduct the Environmental Impact Statement. Several reports suggest that Environmental Resources Management, the London-based company hired to do the study, failed to disclose relationships with TransCanada and other corporations that would benefits from tar sands development.“If this is going to be a scientific basis for a decision on the pipeline…then the credibility of that information must be without any doubt. And at this point, that doubt exists,” Grijalva said at a press conference on Tuesday. The GAO told reporters it had not yet decided whether to conduct the review, but Grijalva said he’d been told the office would pursue an inquiry.

The State Department’s inspector general announced Wednesday that its own review found no violations, but Grijalva still wants a third-party review. “The inspector general was only asked to examine whether the State Department followed its own flawed process for selecting a third-party contractor. The fact that the answer is ‘yes’ doesn’t address any outstanding concerns about the integrity of ERM’s work, the State Department’s in-house ability to evaluate its quality, or whether the process itself needs to be reformed,” Grijalva said in a statement.