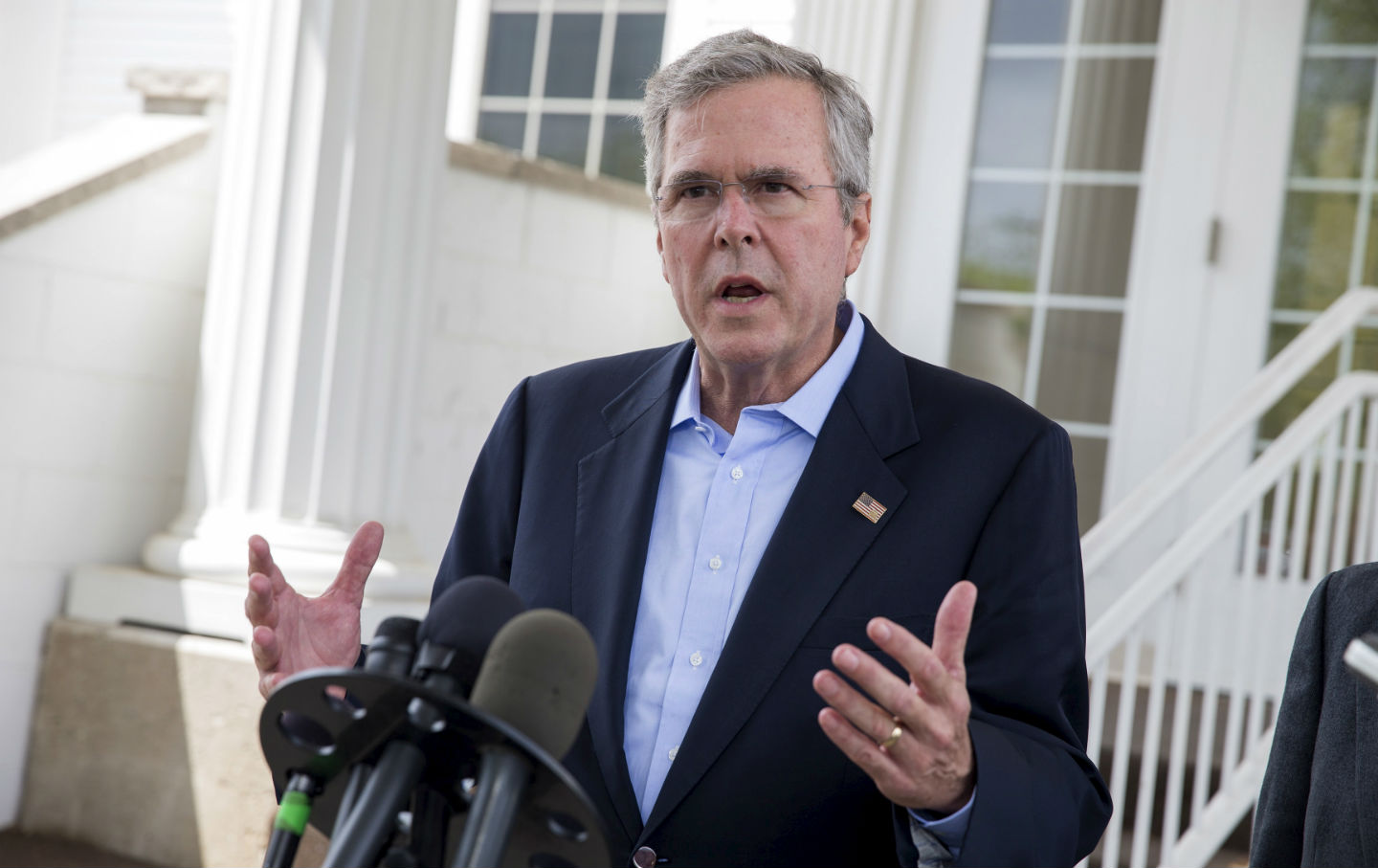 The growing US backlash against Syrian refugees continued to escalate on Tuesday, as at least 27 governors announced that they would close their states to asylum seekers fleeing that country’s civil war.

GOP presidential hopefuls, meanwhile, sought to one-up one another in ways to limit the number of refugees the United States takes in from Syria and the greater Middle East. Senator Ted Cruz called for admission to this country to be limited to Syrian Christians, a position former Florida governor Jeb Bush seemed to adopt over the weekend. On Monday, Senator Rand Paul announced that he would be proposing legislation to suspend visas for refugees from Syria and 30 other countries.

Speaking at the G20 economic summit in Turkey, President Obama promised not to be deterred in his plan to admit 10,000 Syrians in the coming year. “Slamming the door in their faces would be a betrayal of our values,” he said.

The rising anti-refugee sentiment comes in the wake of attacks in Paris—believed to have been carried out to some degree by ISIS—that killed 129 and injured hundreds more in the worst violence France has seen since the end of World War II. The nationalist rhetoric has been spurred in part by initial reports, now called into question, that suggested one of the Paris attackers may have traveled through Greece alongside refugees. Europe as a whole has struggled to respond to the increasing number of people who have sought asylum on the continent. A record 218,000 refugees arrived in Europe in October alone, matching the number for all of 2014.

By contrast, the United States has taken in fewer than 2,000 Syrians in total. Last month, the first month after the White House’s promise to scale up its response and accept 10,000 Syrian refugees within a year, the US accepted just 187 refugees. At that rate, it would take nearly five years to reach the 10,000 refugee benchmark. The increasingly hostile political climate is threatening to derail the already-meager US response to the Syrian refugee crisis.

On Capitol Hill, Representative Michael McCaul, chair of the House Homeland Security committee, released a bill calling for Congress—not the executive branch—to be in charge of resettling Syrians, on the basis that current security measures aren’t rigorous enough. Representative Peter King has called for additional surveillance of American Muslims in the aftermath of the Paris attacks.

Some of the proposals—closing states to Syrians, admitting refugees on the basis of religion—are legally dubious at best, and many experts agree they are more about posturing than implementing actual policy. Steve Vladeck, a law professor at American University and co-editor-in-chief of the Just Security legal blog, says the governors don’t “have a domestic law leg to stand on.”

“Federal law doesn’t condition refugee resettlement upon the consent of a particular state; it merely requires that federal authorities ‘consult’ with state governments (and local governments and other stakeholders) to find the best possible situation for the resettled refugees,” Vladeck told The Nation in an e-mail. “So long as the federal government is content with the arrangements for resettlement, there’s nothing, legally, that states can do to block them.”

Further, as the State Department confirmed this afternoon, once a refugee is lawfully accepted into the country, it is illegal for governors to deny them freedom of movement across domestic borders. “Bottom line, there’s no way that a state can prevent a lawfully admitted refugee from coming to their state,” echoed Judy Rabinovitz, deputy director of the ACLU’s Immigrants’ Rights Project, in a phone interview.

Human rights advocates have opposed the governors’ announcements, urging instead for tolerance and acceptance. “We must not allow these horrific attacks to prevent civilian Syrian refugees from reaching safety; many of these refugees are fleeing from a brutal regime and have themselves suffered horrific attacks by ISIS,” said Betsy Fisher, of the International Refugee Assistance Project, in an e-mail.

Many experts worry that some of the proposals put forward, such as denying entry to Syrian Muslims but allowing Syrian Christians, feed an environment of increasing Islamophobia in the West. In the days since the Paris attacks, Muslims have been targeted in hate crimes in Florida, Ontario, Scotland, and likely elsewhere. In the United States, hate crimes are down generally, but up against Muslims by 14 percent.

More than 4 million Syrians have fled their country since the civil war began in 2011, mostly to neighboring countries. That the United States took in fewer than 200 in October is “disgraceful,” said Adotei Akwei, managing director for government relations at Amnesty International. “We are calling on the US not only to increase the number of Syrian refugees [admitted], but also increase funding for refugee resettlement programs.”

The low number of Syrians admitted doesn’t reflect a lack of applicants. The UN’s refugee agency (UNHCR) has referred over 19,000 Syrians to the United States for review. The ensuing bottleneck is the result of a complicated, multi-agency admissions process that includes a lengthy background check that’s likely to get longer after the Paris attacks.

That process often ranges from 18 to 24 months, but can take years in some cases. Earlier this month, reports surfaced that the United States is planning to open two additional refugee processing centers—one in Erbil, Iraq, and the other in Lebanon—to help fulfill Obama’s promise.

Beyond the outposts that are scheduled to open, it is not clear what the administration is doing to ensure it hits, or exceeds, its goal. In an interview conducted prior to the attacks in Paris, Betsy Fisher, policy director at the International Refugee Assistance Project, said the administration has made some behind-the-scenes changes, but is stalling on others.

“We’ve been told there’s been a significant shift in resources to facilitate faster background checks,” said Fisher. But, she added, “there are other meaningful measures that could be taken to allow larger numbers to enter the US,” including letting NGOs directly refer refugees for resettlement, and broadening existing programs for family members of Syrians already in the country.

In some cases, the government seems to have actually made the review process more complicated. The office of the Department of Homeland Security that performs in-person interviews with asylum applicants added an additional layer of review for Syrians, a step that examines whether the applicant is attempting to seek asylum fraudulently, even before the Paris attacks.

Whether Obama will be able to meet his modest goal of allowing 10,000 Syrians into the country in the next 11 months—or if he’ll be frustrated by his own intelligence services or political opposition—remains an open question. If governors or members of Congress are somehow able to limit the government’s ability to place Syrians in cities and states, Vladeck, the law professor, says Obama still has an unorthodox option.

“Even if the states were in a position to disrupt resettlement, it’s worth remembering that there are six federal territories (including the District of Columbia) where the federal government maintains sovereign control,” he says.