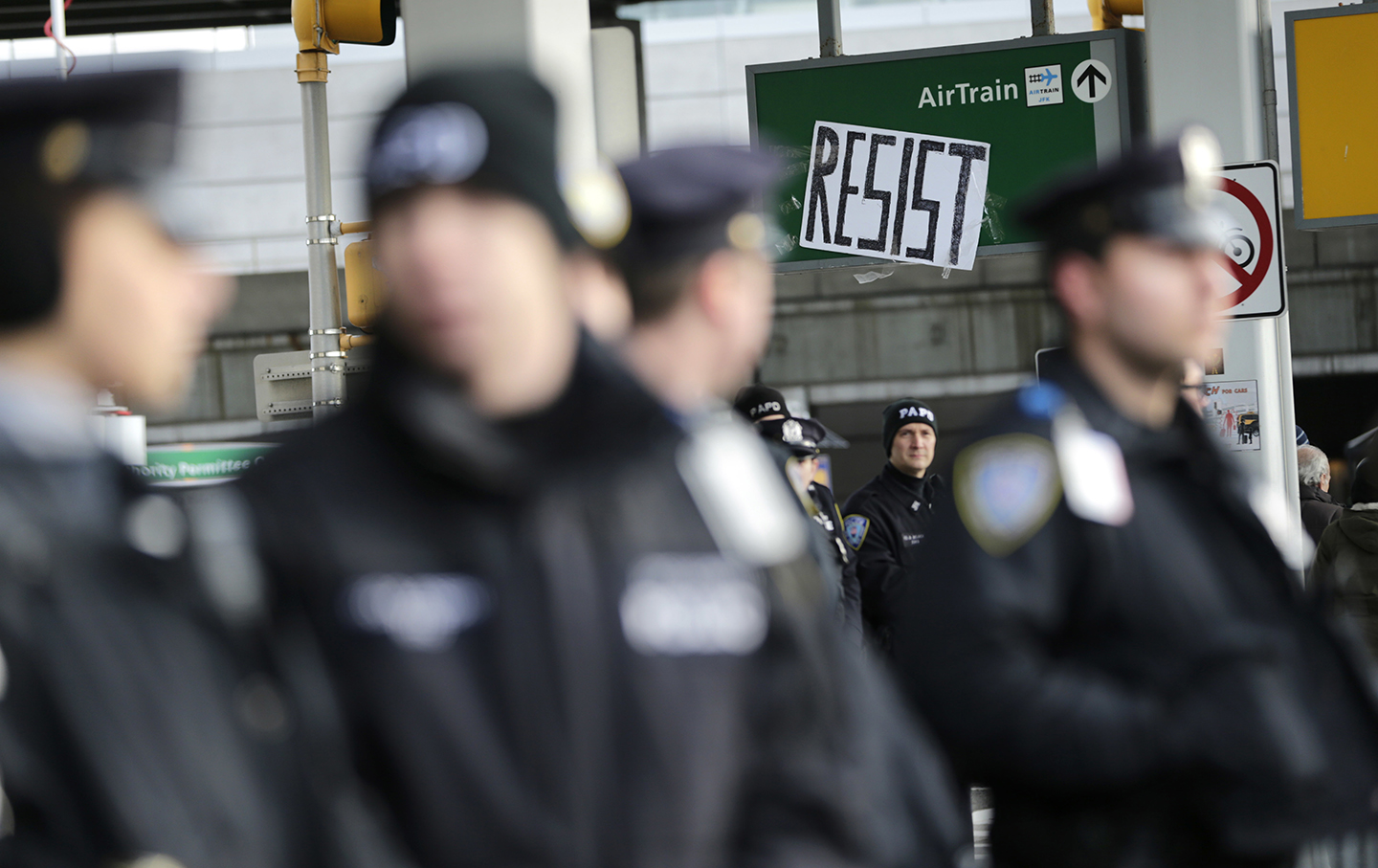 “We are asking for your cooperation!” intoned the mechanical amplified voice on Saturday night outside JFK Airport Terminal 4 in New York City. The hundreds of people who poured out to oppose President Trump’s anti-Muslim travel and refugee ban at the airport suddenly found themselves on the front lines of a geopolitical crisis. Trump’s sweeping executive order stopping refugees from entering the United States for 120 days and, further, explicitly barring people from Iran, Iraq, Libya, Somalia, Sudan, Syria, and Yemen for 90 days spurred spontaneous protests at airports across the country. Within 24 hours, the order was suspended by several courts, and the administration was scrambling to defend itself against international condemnation. Once again, Trump’s attempt to declare a border war met resistance from globally facing cities and democratically rooted courts nationwide.

The protest dynamics recalled the early days of the Occupy Wall Street demonstrations, with that potent swirl of anarchy and militancy that supercharged each confrontation with the police. After cops had cleared the street in front of the airport and pushed protesters onto the sidewalks, Robert Ross, a pink knitcap–sporting New Hampshire transplant, reflected on challenging Trump from a corner of the nation that seemed increasingly distant from his Trump-supporting home state.

“The number one priority is to defend and protect those communities that are most likely to be hit by all of these bullshit policies,” Ross said. While that could “widen the rift and that alienation that’s already begun [in] those polarized segments of our community…. the rest we’ll figure out somehow…but this is urgent.”

The urgent climate overhanging JFK Airport carried historical resonance as well. In the late 1940s and early 1950s, New York was the battlefront of another crisis of executive power, also in the form of a massive anti-immigrant clampdown. During those decades, the Justice Department used the Alien Registration Act, which banned US citizenship for foreign-born communists, to sweep scores of immigrant activists into detention and deportation proceedings. Leftists lashed out at the persecution of communists under the guise of “national security” during those years, and progressives of all stripes understood that the aggression against migrants portended a wider impending mass suppression of constitutional freedoms and political dissent.

Over the weekend, a Federal District judge in Brooklyn issued an emergency order to shield some travelers from immediate deportation, citing “imminent danger [of] substantial and irreparable injury to refugees, visa-holders, and other individuals.” The full legal review of the executive order could take months, however, and there’s little guarantee Homeland Security officials will adhere to the injunction. But on Sunday, the administration seemed to climb down somewhat, claiming that green-card holders and dual nationals would not be blocked, just subject to stringent questioning—perhaps.

Countless others around the world who had not yet made it to the United States still face indefinite banishment, including students, artists, scholars, and refugees previously authorized to enter the country. The ban’s scope is further complicated by another historical throwback—plans to exempt persecuted Christians from the ban—evoking the most blatantly racist immigration policies of the Chinese Exclusion Era, which stretched from the mid-19th through early 20th centuries.

Almost immediately, the order sparked political fallout worldwide, perhaps provoking the same extremism Trump claimed to be thwarting. European allies condemned the move, even as they wrestled with internal political tensions over accepting refugees. Protests across Britain assailed Prime Minister Theresa May for coddling Trump on her maiden diplomatic visit to Trump’s America, the same day he signed the ban.

While Trump’s move was internationally polarizing, protesters held forth at Terminal 4 with a spirit of global reconciliation. Wearing a “Muslims for Humanity” shirt, Isaac, who only gave his first name, delivered voluntary aid to demonstrators on behalf of Islamic Charities, which usually focuses on emergency response work for natural disasters. This was a different kind of crisis that, in some ways, hit closer to home. Isaac, who came as a refugee from Afghanistan in the late 1990s and now helps newly arrived refugees navigate the social and economic hardships of resettlement, said there was worry in the communities he serves about family members back in their home countries. But his adopted city’s tradition of welcoming outsiders would keep its denizens protected from Trump’s onslaught, he was sure. As he poured out steaming cups of coffee for the protesters, he said: “Every refugee has to come across something…. You always have to be hopeful, hope is what keeps you going on”

Cathy, who also gave only her first name, came out to the protest with friends from Manhattan and was more focused on being in solidarity with the rest of the world: “We’re not surprised this is happening in New York…. What’s surprising and heartening is that this has spread to the rest of the world.”

Tristina Dies, who had driven up from Allentown, Pennsylvania—quintessential “white working-class” Trump country—belted out “This Land is Your Land” in an NWA shirt from behind the police barricade. She said she had been forced out of her job in recent months because of her religion—a Muslim convert from a conservative Catholic family, she said she hadn’t spoken with her father, a Trump voter, in months.

Back in her blue-collar hometown, Tristina predicted, “I’m going to lose a lot more friends and family because of him, because my mouth does not shut.” Still even in her Pennsylvania enclave, a local Syrian family affected by the policy was protesting that after a decade-long wait their unification with relatives had been abruptly blocked by the refugee ban.

The fact is, the country Trump seeks to “protect from terrorism” doesn’t exist. His rogue crackdown on migrants wasn’t welcome across America, even in Trump country. And while New York might be bolder than most cities in defending migrants, the protesters at the barricades never looked more diverse, and never felt more indivisible. “Refugees are welcome here. We can do this all four years!” they cried. The cops were getting our cooperation, all right—just not the kind they were asking for.