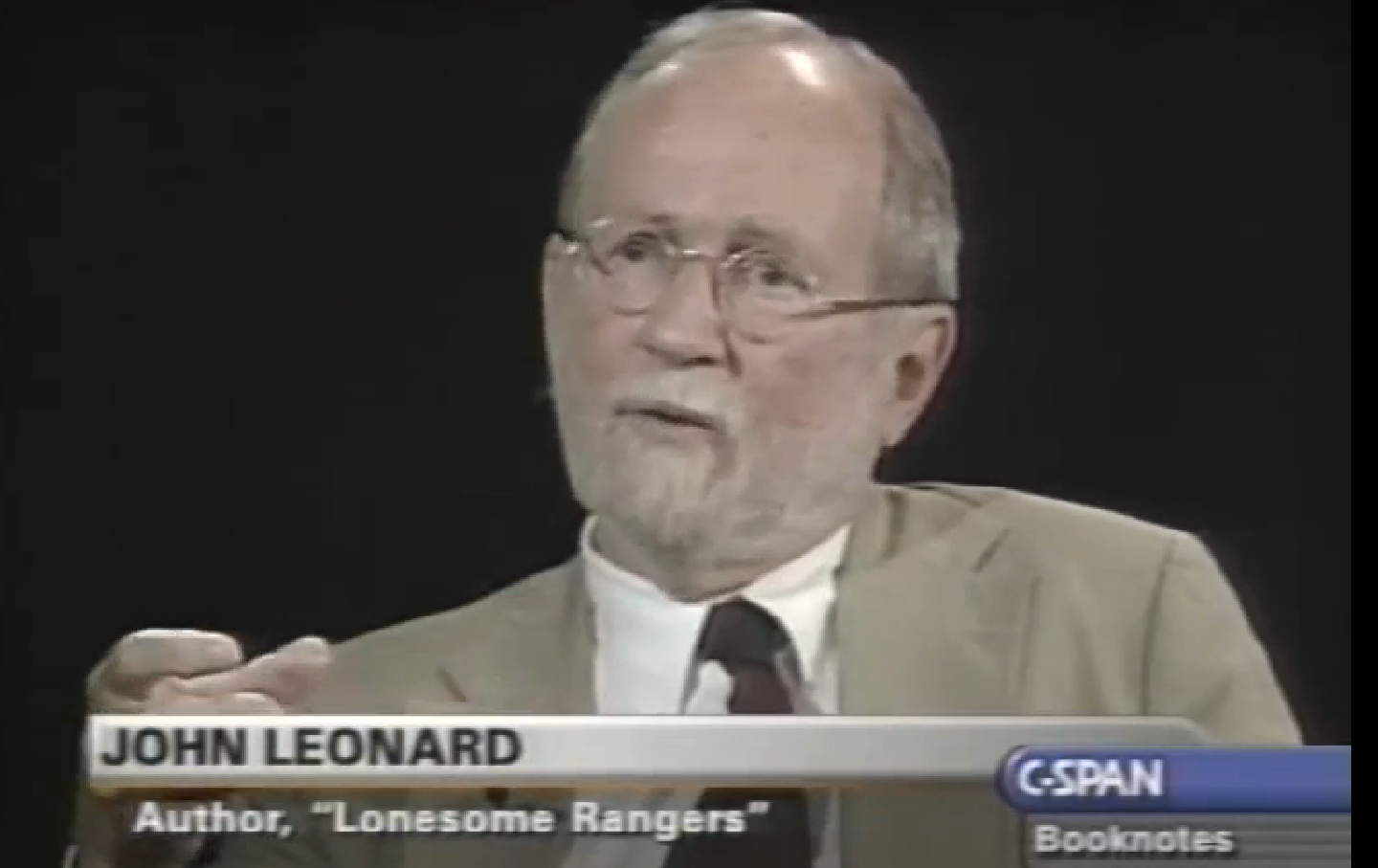 John Leonard was, with his wife, Sue, literary editor of The Nation from 1995 to 1998. This essay is adapted from the introduction to Reading for My Life: Writings, 1958–2008, by John Leonard, edited by Sue Leonard, forthcoming in March. Printed by arrangement with Viking Penguin; © 2012 by E.L. Doctorow.

John Leonard started out as a novelist but was diverted, presumably under the exigencies of making a living, his brilliance as a freelance writer being quickly recognized by editors and publishers, so that he found himself at a precocious age writing first for the National Review, then as a daily book reviewer for the New York Times and quickly as editor of the Times Book Review. Perhaps he recognized that his creativity was not the burrowing kind of the novelist, who lives patiently for years with a set of images and torturously realized intentions in the production of a novel. He was from the beginning a quick study, a wunderkind, writing even as a 19-year-old sophomore for the Harvard Crimson these already typically referential Leonardian lines in a piece he called “The Cambridge Scene”: “Did not Eliot return to dead cultures, ancient languages, and the Legend of the Fisher King? Did not Yeats sustain himself on the Irish folklore? Did not Lawrence traipse across continents to Mexico, seeking the meaning of the Aztecs, the wisdom of primitive man?… Yours is a motel civilization…. Your art makes no sense and your music is too loud.”

No wonder he abandoned Harvard for the University of California, Berkeley. But in the cold war 1950s, he was to touch down in New York, and his youthful longing for whatever came before, whether the authenticity of folklore or the romantic radicalism of fin de siècle Greenwich Village (“There used to be a time when John Reed and Lincoln Steffens lived at the same Village address…. No more…. The Village today is populated by the smug, the self-conscious, and the literary sycophants”), was, in a sense, the young man’s common enough generalized anxiety of influence—his fear that he and his era could never match the grand human proportions of what had been previously conceived. Or was it what he imagined had been conceived—his idealistic sense of a human greatness that he could never attribute to what he found in the world around him? He would all his life be an avowed skeptic but with a religious sensibility that would make of him a celebrant of the moments when he did glimpse something of the full expression of human capacity. And perhaps, in a kind of quest, he was to wade right in, immersing himself totally in what imaginative work his life and times had to offer, his idealism reconfigured as a very sharp, keen wit that could with authority assess books and ideas for what they are.

If you consider a collection of John Leonard’s essays and reviews as a lifelong accounting, you will have a good idea of what went on of significance in the latter half of the American twentieth century and the first years of the twenty-first. Though reviewing literary work was his calling, it did not box him in. He was a born freelance, going wherever that tenuous life led him, from the monuments of high culture that he was inspired to celebrate, to the commodities of the low, from which he would take gleanings where most of us would find none. It is difficult to understand how, with his immense reading and the sustenance his mind sought, he could have sat himself down year after year to examine the products of television. Yet there he was, considering what it meant when sitcom settings moved from the kitchen to the living room, and the family characters sitting on the living room couch, and presumably watching their television, seemed to be watching him. Or there he was, considering what these programs said about fatherhood and motherhood in America. He understood the presumptive sociology in the arrays of sitcoms and to what degree they reflected American domestic reality or in fact helped to shape it.

But the novel was to Leonard the presiding art—always in its intentions, if only occasionally in its realization, a major act of the culture. He says in the piece “Reading for My Life” that “Popular culture is where we go to talk to and agree with one another; to simplify ourselves; to find our herd…. Whereas books are where we go alone to complicate ourselves.” He is an excited first responder when the work is García Márquez’s One Hundred Years of Solitude. “You emerge from this marvelous novel as if from a dream, the mind on fire…. So richly realized are the Buendías that they invite comparison with the Karamazovs and Sartorises.” One book reminding him of another is a Leonardian characteristic, as if books are antiphonal calls and responses. It is in his most exultant reviews that his words tumble forth in catalogs of ascription, as he tries to convey as much of the book as he can short of quoting the thing in its entirety: “Family chronicle, then, and political tour de force, and metaphysical romp, and, intentionally, a cathedral of words, perceptions, and details,” he says of the García Márquez, amounting to “the declaration of a state of mind: solitude being one’s admission of one’s own mortality and one’s discovery that the terrible apprehension is itself mortal, dies with you, must be rediscovered and forgotten again, endlessly.”

The great English critic Frank Kermode said that every piece of literary criticism rewrites the text it examines. Less dogmatically expressed, the idea is that a work is not completed until the reader animates the text, as if the lines of a novel are a printed circuit through which the force of the reader’s life will flow. And so not just the critic but every reader rewrites the text, and the rewrite is a measure of the reader’s mind. Leonard, with his mind of swiftly moving, synaptically fired thoughts, so that his sentences seem to race along and sometimes pile up in their effort to stay abreast, will usually find the expanded possibilities of a text. But it is not only his capacious mind that distinguishes him; it is the wisdom of his critical decency. When he attends to someone’s work, there is not only illumination but a beneficence of spirit, as if, even when he doesn’t like something and will tell us why, he is still at work championing the literary project.

Of course, some writers did arouse his sporting nature—Norman Mailer for one, a writer for whom he had a considerable, if not blind, regard and whose novel Harlot’s Ghost is examined in the closest thing to a forensic review you ever will read. On another occasion Leonard reviewed a late Mailer work, The Spooky Art: Some Thoughts on Writing, taking it down quietly, gently, and in parentheses.

Mailer: That is one of the better tests of the acumen of the writer. How subtle, how full of nuance, how original, is his or her sense of the sinister?

Mailer: Few good writers come out of prison. Incarceration, I think, can destroy a man’s ability to write.

Mailer: It is not only that no other man writes so well about women [as D.H. Lawrence], but indeed is there a woman who can?

For Leonard could be very funny, his prose skimming along with a breeziness, every page filled with wordplay—cross-cultural allusions, puns, overreaching metaphors, phrases stolen from German metaphysics, lines from movies, double entendres, political riffs, as if to persuade us that, as serious as the critical enterprise might be, we are not to worry, no solemn self-importance is to be found here, that he is of the street, that if he’d been back in Elizabethan times, watching a Shakespeare play at the Globe, he’d be standing in the pit.

Leonard was a political animal, and he waded into the social and cultural battles of the day, always pleased to have a forum but never mincing his words by way of holding on to it. He was not kind to the media—People, Newsweek, the Wall Street Journal, Cosmopolitan—for their buffoon-like coverage of the AIDS epidemic, the racism implicit in their reporting, the prissy misinformation they spread. Speaking of the Iranian fatwa, or contract, out for Salman Rushdie, author of The Satanic Verses, he scorns the book chains that won’t sell the book, the Catholic and Jewish religious figures who deplore its publication and those of Rushdie’s fellow writers who demand that it be pulped. Of Richard Nixon’s memoir, Six Crises, he says, “Nixon has nothing to offer this nation but the cheap sort of second-rate sainthood he is here busy trying to manufacture.” And he functions as a droll chorus to Bob Dylan’s tactically cunning ascent to musical stardom in the 1960s, titling his review of books about the singer “Blowing His Nose in the Wind.”

Finally what we realize from the intense life in his prose is that Leonard held back nothing, neither hiding behind a formal diction nor modulating the demeanor he carried to every piece in deference to the publication running it. In the realm of cultural journalism there was no one quite like him. He gave everything he was, each time out. To read his work today is to encounter a mind still thinking, a voice still alive.

There was something of a religious about John Leonard, however much of a principled skeptic he may have been. With his pale complexion, his round eyeglasses, there was a translucence to him such as is given to the spiritually employed. It was as if he had been assigned, somewhere off the earth, to take note of writers and to testify to their value, and was, willy-nilly, a patron saint of the writing trade, of the story-makers, of the grub street international bunch of us. With his love of language and his faith in its relevance to human salvation, our own inadvertent, secular humanist patron saint.