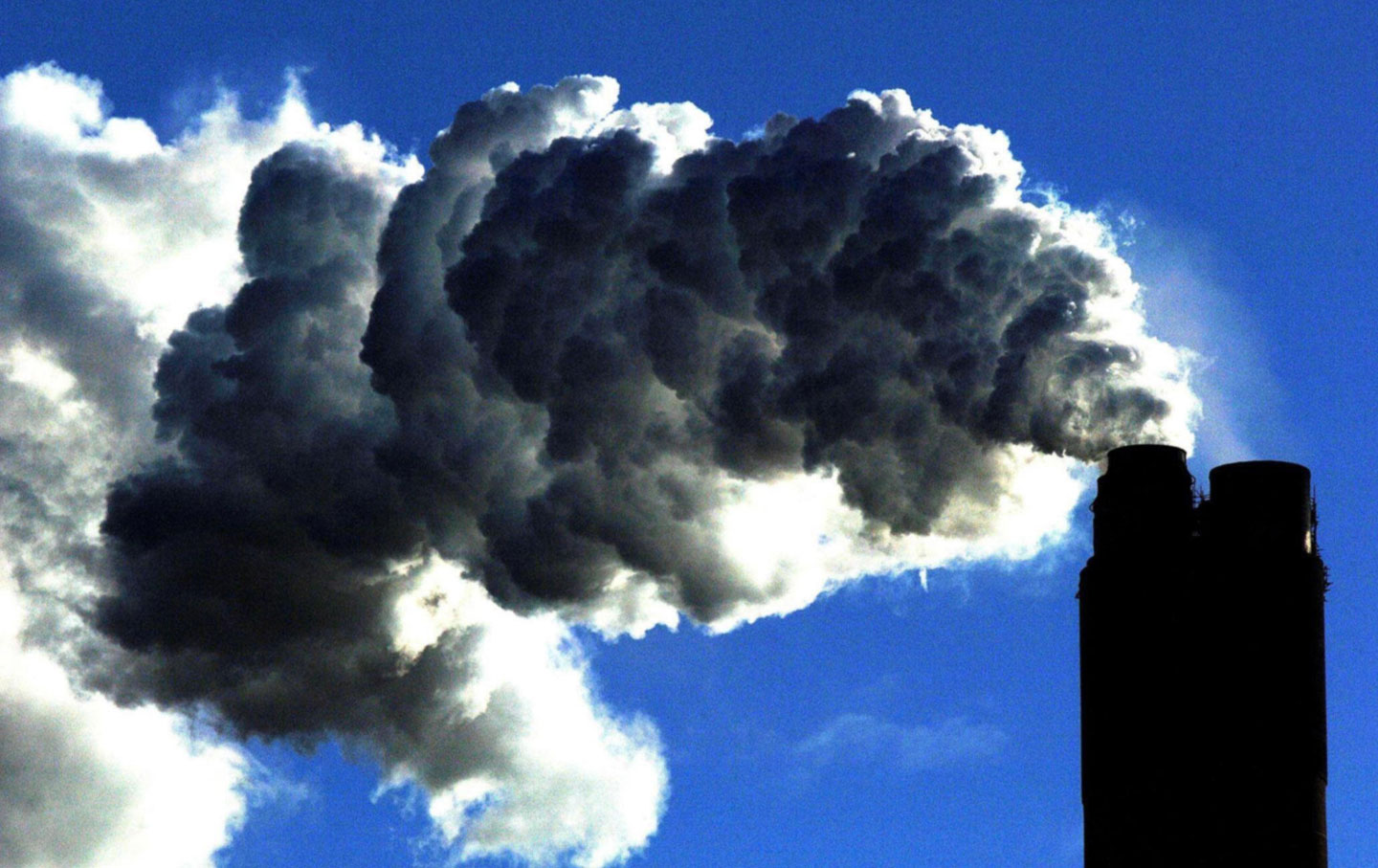 Carbon-tax haters can relax. The proposal for a national carbon tax released on February 8 by high-level Republicans, including über-GOP consigliere James Baker, isn’t going anywhere. Financially and ideologically, the American right is wedded to carbon fuels. Trumpism runs on and reeks of them. Predictably, not a single Republican in Congress, and no one in the White House, has uttered a single positive word about the new carbon-tax plan.

Nevertheless, the proposal’s intended audience may not be Beltway Republicans but rather those ordinary Americans, majorities in both parties, who say they want action on climate, and who therefore might yet figure in the political equation over climate policy. That group includes progressives. We should pay attention: Carbon taxes matter.

Our long-building climate crisis is already materializing as drowned coasts, punishing droughts, vanishing glaciers—and political upheaval. At its root is a century-old lie: market prices for gasoline and other fossil fuels that do not factor in the damage from burning them.

A clean-energy revolution is at last underway, with wind power, solar electricity, and energy efficiency becoming not only cheaper by the day but also easier to deploy. Still, the clean-energy transition will be slowed until prices of coal, oil, and gas reflect their true environmental costs. A carbon tax could do that, if designed properly.

How carbon taxes work is simple enough, at least in theory. Fuel use is infinitely varied and intricately woven into society in ways that regulations such as auto-mileage standards can’t fully reach. Clear price signals, on the other hand, can be a nearly magic wand to help billions of invisible hands rapidly reduce and replace fossil fuels.

But with a carbon tax come difficult choices about the vast revenue it will generate. Carbon taxing had a test run at the ballot box last November in the state of Washington, and it ended badly.

Progressives can’t just walk away from carbon taxes, the policy tool with the best chance of catching fire globally.

On November 8, voters in the Evergreen State rejected by a nearly 3-to-2 margin what would have been the nation’s first statewide carbon tax. A win for “Initiative 732” would have given the United States a carbon-tax beachhead, like Canada’s British Columbia, which has had a small but successful carbon tax since 2008.

Remarkably, the decisive factor in defeating I-732 may not have been money from Big Carbon or even popular aversion to higher taxes, since the initiative was tailored to keep Washingtonians’ tax burden unchanged. What doomed I-732 was a fissure within the climate movement, with centrist economists and other policy wonks in favor of the initiative and progressive greens opposed.

Stated briefly, climate activists in Washington split over opposing answers to two key questions: What are carbon taxes for, and who gets to design them?

Carbon taxes can cut emissions in two ways. As noted above, they raise the price of carbon fuels, thereby worsening their competitive position vis-à-vis cleaner fuels. In addition, the tax revenues raised by a carbon tax can be invested in clean-energy infrastructure such as public transit and community solar.

The first path—the “price pull” of boosting market prices of carbon fuels—is what dazzles economists. The second route—the “revenue push” of investing in green infrastructure—appeals to many ordinary folks, especially on the left. Some progressives actively distrust policies that lean hard on price signals, partly for fear that workers in dirty industries will be penalized as investment migrates to cleaner alternatives.

For decades, reactionary forces in the United States have been able to block seemingly every new public endeavor by labeling it “tax and spend.” The Washington State carbon-tax proponents believed they had an antidote: Don’t allow the government to spend the revenues from the carbon tax; rather, use those revenues to reduce other taxes. The political assumption seemed to be that going “revenue neutral,” though it might frustrate the left—bye-bye, public investment—could placate the right or at least capture the center. And so Carbon WA, as the advocates of I-732 called themselves, fashioned its ballot initiative around cuts to the state’s regressive sales tax.

Progressive greens recoiled. The Alliance for Jobs and Clean Energy, a state umbrella group of environmental-justice organizations and mainstream allies, blasted I-732 for starving green jobs and ignoring front-line communities. So did nationally prominent progressive leaders like Naomi Klein and Van Jones. The measure’s electoral chances, which were never good, could not withstand this split. On Election Day, as Hillary Clinton was besting Trump in Washington State by half-a-million votes, the carbon tax was rejected, 59 percent to 41 percent.

But progressives can’t just walk away from carbon taxes. Carbon taxes are the only policy tool that, by slashing demand in a rapid, predictable way, divests our economy from fossil fuels and enables governments, business, and consumers to make investments in the transition to clean energy. Carbon taxes also have the best chance of catching fire globally.

The carbon tax James Baker brought to the Trump White House on February 8 on behalf of the new Climate Leadership Council has a lot in common with I-732: The Council’s proposal is also avowedly revenue neutral. But rather than lowering an existing tax, it relies on a so-called tax-and-dividend model: As the state of Alaska does with oil revenues, revenues from the Council’s national carbon tax would be returned equally to all American households in quarterly “dividends” digitally deposited in Social Security accounts. The tax would start at $40 per ton of carbon dioxide.

Earmarking all of the revenue to these dividends creates the political will to raise the tax every year, since the dividends rise in tandem with the tax rate. Ramping up the tax by $5 a year would shrink the use of carbon fuels so drastically that, by my calculations, US carbon emissions in 2030 would be 40 percent less than they were in 2005 (a standard baseline year).

Government policy revolves around trade-offs, and on balance James Baker’s carbon tax is worth supporting.

Yet this progress comes with a catch. The council would phase out much of the Environmental Protection Agency’s regulatory authority over greenhouse gases and would outright repeal President Obama’s Clean Power Plan to cut emissions from electricity generation. It would also immunize fossil-fuel companies from lawsuits for damages done by their products—lawsuits such as those bound to arise from the revelations that ExxonMobil and other companies knew for decades about the climate damages their products cause, and lied about it.

But government policy revolves around trade-offs, and on balance the council’s carbon tax is worth supporting. After all, well over 80 percent of the Clean Power Plan’s targeted reductions for 2030 were already achieved by the end of 2016. Thus trading away the Clean Power Plan for a tax that could scour fossil fuels from the entire economy is like swapping an aging ballplayer for the next superstar.

Of course, some people will not see it that way, particularly traditional green groups that helped write the laws and regulations that cleaned up the nation’s air and water. Some will regard the council’s trade as a ploy to undo the EPA’s authority to protect not just climate—where it may be largely ineffectual anyway—but public health.

With Republicans tightly lashed to climate denial, the value of Baker’s carbon-tax proposal may be less as a gateway to legislation and more as a spur for progressives and other citizens to take a clear look at carbon pricing.

Will California’s Cap and Trade Be Fair?

Heather McGhee and Robert B. Reich

Will progressives trust the verdict of economists that a revenue-neutral carbon tax can drive the energy transition so long as the tax level is high enough? Or do we support carbon taxes only if the revenues are invested in the clean-energy transition? If so, how do we craft a spending program that reconciles the claims of competing interests? And what is our blueprint for building political power to enact such a carbon tax, when “tax” remains a dirty word in national politics?

Clear majorities of Americans want climate action. Remarkably, some polls have even found that majorities of Americans support carbon taxes like the Climate Leadership Council’s proposal. With the Democrats’ national defeats last November, the failure of climate activists to unite on the Washington state referendum is looking like an unforced error of cruel proportions. We can’t afford to repeat that mistake at the national level.