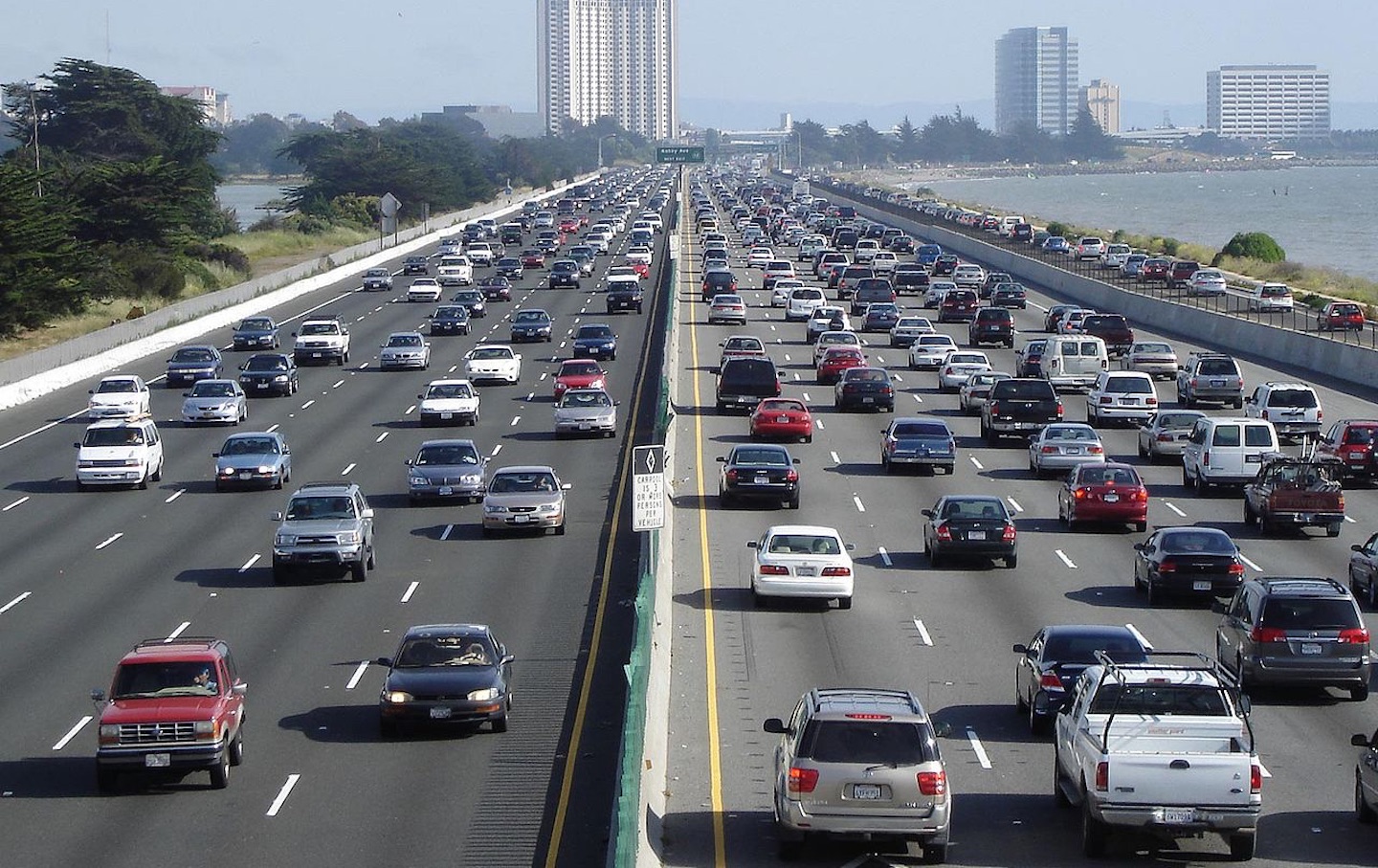 Traffic on I-80 in Berkeley, California. (Wikimedia Commons)

President-elect Donald Trump has made it clear that he wants to repeal President Barack Obama’s signature climate policies—the Clean Power Plan and the Paris Agreement on global emissions reductions. If he is successful, we will need a Plan B that the Republicans cannot obstruct. That means turning to states and cities, and in a big way.1

Some have already started to think about how climate change can be fought at the state level. But there is a lot more work to be done. One of the most hotly debated ballot initiatives in 2016 was Washington’s first-of-its-kind proposal for a statewide carbon tax, known as Ballot Initiative 732 (I-732). Despite the robust debate over its merits, however, the proposal went down to defeat with only 41 percent of the vote. That was at least in part because many who support aggressive carbon taxes or other carbon pricing approaches welcomed I-732’s defeat. We were among them.2

A quick review of the proposal shows why we objected. The tax side of I-732 was actually quite strong. It would have covered 85 percent of greenhouse-gas emissions in the state, and, starting at $15 per metric ton of fossil-fuel emissions in the first year, and rising to $25 per ton in the second year, the tax would have risen 3.5 percent annually thereafter, up to $100 per ton by the middle of this century. Taxable sources of emissions would have included both fossil-fuel consumption and the carbon emissions embedded in any imported energy. The tax schedule offered by I-732 appeared to be one of the most aggressive in the world at any level. 3

So why did we oppose it? Unfortunately, the proposal went badly wrong on the revenue side of the equation, starting with the major flaw of adopting a “revenue-neutral” stance. Revenue neutrality means that the burden of the carbon tax should be offset by other tax cuts or tax benefits. I-732 provided for hundreds of millions of dollars in tax cuts for corporations, helping to generate an estimated net revenue loss of $800 million over six fiscal years, according to the state’s Department of Revenue. That made I-732 not revenue neutral but revenue negative. Underscoring these problems, the advocacy group behind the initiative, Carbon Washington, did not seriously seek out and incorporate input from environmental and social-justice advocates and community leaders. 4

For millions of Americans, climate change is indissolubly linked to racial inequity and economic exclusion.

If I-732’s backers had sought guidance from advocates, they would have realized that the principle of revenue neutrality is deeply out of touch with the realities of both climate change and inequality. It essentially suggests that polluters don’t really need to pay for the carbon reductions, and that nothing else in the economic system really needs to change. Yet for tens of millions of Americans, and especially for people of color, climate problems are indissolubly linked to problems of racial inequity and economic exclusion. Many are doubly hard-hit by the fossil-fuel economy—disproportionately hurt by its pollution and climate impacts, yet largely excluded from its economic benefits. There is nothing neutral about the consequences of carbon pollution and economic exclusion. Therefore, policies that determine who pays for carbon pricing and other climate policies—and who benefits from such reforms—must not be neutral, either. Indeed, they should be specifically targeted for the benefit of the communities that suffer the most.5

Some “revenue-neutral” climate-change proposals—including I-732—include tax cuts and/or tax benefits targeted for lower-income households, and proponents may characterize such policy features as a blow for equity. But this misses the point: While neutrality on revenue may sound fair or maybe even equitable in some forms, in fact it is neither, because it simply maintains an already highly inequitable and unsustainable status quo of revenue starvation and public disinvestment. In Washington, the state Supreme Court has mandated K-12 spending increases estimated at nearly $6 billion, and long-term disinvestment in the state’s higher-education system has driven up the cost of college tuition by 154 percent since 1990. Given such realities, keeping revenue neutral may be a plus for the corporations whose taxes are cut, but it’s a negative for people.       6

The better way forward, for people and for the climate, is a “revenue-positive” approach, whereby polluters pay for carbon reduction either through a carbon tax or a cap-and-trade system, and the revenue generated is directly invested in disadvantaged communities. This “price-and-invest” model, in other words, takes money from the polluters and gives it back to those they have harmed. The money is invested in clean-energy and clean-transportation projects, with three important results: improving community health, creating new green jobs for residents, and reducing carbon in the atmosphere.  7

Some advocates of price-and-invest propose a hybrid spending design that includes both direct investment and targeted cash dividends or tax rebates for low-income households. While such a hybrid approach is certainly worth considering, it’s important to keep in mind the fact that carbon-tax revenue is inherently transitional and will shrink over time as emissions are reduced. In that light, spending choices may have significantly varying impacts and they need to be evaluated not just in the short term (i.e., to address temporary problems such as a spike in energy costs) but from a long-run perspective as well. For example, direct investment in energy efficiency, renewable energy, and mass transit, which could create thousands of green jobs in cities like Atlanta or Milwaukee, could be much more impactful in the long run than temporary cash dividends targeted for low-income households in those cities. According to UCLA’s Luskin Center for Innovation, achieving just 10 percent of Los Angeles County’s solar potential (where half of low-income Californians live) would create 47,000 jobs. Energy-efficiency investments for public housing could provide significant savings for many low-income residents—not just transitionally, but over a lifetime for those with stable housing. Public financing to underwrite new forms of community ownership of energy assets could help close the yawning racial wealth gaps that afflict large and small cities alike. These sorts of investments are good for economic growth as well. A recent study of the Regional Greenhouse Gas Initiative’s program in the Northeast found that for every $1 in program investment, $2 to $4 was generated in economic and health benefits for communities. Sustainable growth that helps families, not more budget-busting tax cuts—that’s exactly what we need.8

Some advocates are promoting the idea of a revenue-neutral “fee and dividend” policy, which would see 100 percent of carbon-tax revenue returned to households through some type of rebate program. But this approach—especially if the policy assumes the need for a broad distribution of dividends—would have little or no long-run impact on employment, household savings, or community wealth in poor neighborhoods. This is not even to mention the fact that direct investment in job-creating clean-energy programs and infrastructure can help to accelerate emissions reductions and enable more aggressive reduction targets. For climate activists, this should be a key selling point for the price-and-invest approach.9

Another, more political concern is that the dividend-only idea is being heavily promoted to Republicans at the state and federal level, particularly by a group called the Citizens’ Climate Lobby (CCL). Yoram Bauman, the architect of I-732, has partnered with CCL, while dismissing critics’ racial-equity concerns as a “political weapon” for expanding government. (Certainly, many supporters of I-732 would not agree with this sentiment.)10

‘All Resistance Is Local’: A Plan of Progressive Action for the Trump Years

Pointing in the opposite direction, a revenue-positive, price-and-invest approach could be politically winnable in some states, particularly given the new urgency for state and local action on climate. In the 2016 elections, the passage of a number of revenue initiatives connected to direct investment in things people want could be a bellwether for carbon price-and-invest policies. While Washingtonians rejected I-732 statewide, residents of the Puget Sound region voted yes on a $50 billion mass-transit program, which will create an estimated 200,000 jobs. This huge investment must have seemed very worthwhile to voters, given the relatively high price they will pay on their tax bills in exchange—an estimated $169 annually for the median household.    11

Similarly, support for carbon pricing is likely to be much stronger if a large share of the revenue is invested in communities in desirable ways. Pushed by grassroots environmental and social-justice groups, California has led the way on this approach, with 2012 legislation (Senate Bill 535) requiring that 25 percent of carbon revenue from the state’s cap-and-trade program must be spent on clean-energy investments that benefit environmentally vulnerable low-income communities in places like Stockton, Fresno, Richmond, Riverside, San Bernardino, and Los Angeles (the targeted share for these communities was recently raised to 35 percent). In 2015 and 2016, according to TransForm (a transportation advocacy group), approximately $1.2 billion in cap-and-trade revenue was invested in clean energy and transportation projects either within such communities or targeted for their benefit. To put this in perspective, the Community Development Block Grant program (the largest federal community grants program) allocated only about $300 million to California cities and counties in fiscal year 2016.12

California has inspired other states to go even further. In New York, the Climate and Community Protection Act, the most progressive climate-equity policy we’ve seen, is gaining traction, after being passed by the state Assembly last spring. The bill would set a mandate of 100 percent renewable energy in New York by 2050, with 40 percent of investment (whether through carbon pricing or other avenues) targeted for environmentally vulnerable low-income communities. Importantly, and in contrast with I-732 in Washington, both the California and the New York policies were forged in deep engagement with grassroots coalitions led by racial justice organizations, alongside trade unions, environmental groups, and community organizing groups. In Washington state, the main progressive opposition to I-732 came through the Alliance for Jobs and Green Energy, a very similar coalition. The Alliance is now working to re-tool the carbon tax agenda in Washington with a broader and bolder vision for uniting climate and equity advocates in a single larger campaign aimed at getting a bill passed in the state legislature. 13

Taxing carbon for investment in oppressed and underserved communities is the core of a new progressive politics.

Taxing carbon for investment in oppressed and under-served communities is the core of a new progressive politics that marries climate and equity goals in a powerful, simultaneous rejection of polluters’ free ride on climate change and the ruinous, often racist, austerity politics of the last 40 years. The coalitions of racial justice, labor, and environmental groups that will be needed to win price-and-invest campaigns in the states might also be the template we need for rebuilding progressive power nationally. When we choose this path, the communities that have been hurt the most by, and gained the least from, the fossil-fuel economy are put at the center of action on climate change and broadly included in the huge clean energy and clean economy investment opportunity that lies before us. That is the right thing to do, and it is the best path forward for our people, our country, and our planet. 14